Editor's note: In April, Global Sisters Report published an article about a new book, However Long the Night: Making Meaning in a Time of Crisis, A Spiritual Journey of the Leadership Conference of Women Religious, in which former LCWR leaders, executives, and members of a support group reflected on years of Vatican scrutiny, and how they navigated the organization through the doctrinal assessment to an amicable resolution with the Vatican. The 10 reflective essays describe their approaches and practices used in moving from a reaction "immersed in our confrontational culture" to "discovering another way of being." In the two columns below, a sister who experienced those years from "within the ranks" of a community, and one who is a past president of LCWR reflect on the book in light of their own experiences.

However Long the Night: LCWR and the investigation

As I reflect on a recent book about the Vatican investigation of the Leadership Conference of Women Religious (LCWR), I am ruminating on two particular memories.

School Sister of Notre Dame Francis Padberg was once asked: "What is the most dangerous thing you've ever done?" She responded: "Learn to read."

Another comment came from a generous Jesuit when I asked: "Howie, what would you like to do that you've never done before?"

His response surprised me. "Become a woman," he said candidly. "I've listened to faith-filled women share their heartache experience of being a woman in the church, and think it would be good to experience it myself."

Both comments offer a springboard to explore the courageous stance of LCWR to the Vatican mandate, commonly referred to as "the investigation," which took place in the United States from 2009 to 2015.

It is described in However Long the Night, narrated by those sisters in leadership during that time, as well as lay supporters, and edited by Annmarie Sanders, a member of the Sisters, Servants of the Immaculate Heart of Mary in Scranton, Pennsylvania and LCWR's director of communications.

Prayerfully reflecting on this journey, I was moved by the disciplined and loving stance toward the hierarchical church, balanced by its faithfulness in honoring the inner authority of women religious. The book is dedicated to "Pope Francis, our brother and friend, and for all women religious in the world who share our quest for God."

This carefully scripted dedication is the underpinning for the quality of contemplative dialogue which has set a "gold standard" for women religious. As I read reports of these meetings, I could feel an all-pervasive angst bubbling just beneath the surface as hope for "dialogue" was met with the expectation that sisters would be silent and submissive: their experience encased in a 12th-century expectation by the clerical/hierarchical church.

The title However Long the Night emphasizes the importance of developing patience, an informed conscience, the ability to claim the agency of women, and the desire to live out of a deep, contemplative space, cultivated with loving honesty. (Their particular process for making decisions out of a contemplative stance is described on page 182.)

This struggle continues as I write this.

At the same time as the investigation of LCWR, 80 percent of U.S. women religious were also experiencing an apostolic visitation by the Vatican. Sisters continued to carry out their ordinary ministry while responding to both Vatican activities, even while living under the suspicion of infidelity. Fear was in the air: It was a challenging time for both leaders and members.

This book was the result of two years of dialogue and retreats by those in leadership as well as lay supporters. Work on it began after the official conclusion of the investigation in 2015.

As I read the background of the authors I recognized similar characteristics to sisters in my community: well-educated, not only academically, but in survival skills and in many more ways that they learned from those they serve.

They know how to deal with boardroom politics and build consensus. They have learned lessons from rigorous listening to a variety of opinions in health care, education, social services, and parishes, then trying to form a community and move forward — always stressing the Gospel call of loving forgiveness and respect. Some have served in other cultures where they risked imprisonment for sharing Christ's love for the outcast.

Through this corporate personality of the American women religious looking at new cosmology and other current topics, their practical wisdom served them/us well in setting some guiding principles for their dialogue with the members of the hierarchy with whom they met regularly. Pressures were engaged with humble strength.

Here are some highlights that spoke to my sense of gratitude and respect for their contemplative approach and fidelity to their inner truth:

They recognized the power of the media and yet made decisions to hold the sacredness of their dialogue until they felt it was the appropriate time and place for sharing.

This must have been an excruciating dilemma, especially when the Vatican office released news of the mandate to the press before the sisters had returned from their Roman visit. How were they to trust ongoing conversations if basic courtesy was missing?

There is a deep chasm between the 50 years of learning to dialogue, work toward consensus and hear other points of view, which LCWR and member congregations have labored over on difficult issues, and a hierarchical lack of willingness or ability to engage in such dialogue.

Bridging this chasm is an ongoing challenge within the church, experienced by lay colleagues as well as women religious.

Advisors both lay and religious continued their invaluable support of the sisters, recognizing this struggle as relevant for many Catholics. Solidarity with Sisters continues today to support women religious and dialogue with LCWR.

The authors wrestled with their need for honesty and doing their own inner work.

"Each time we met among ourselves or with the archbishop or Congregation for the Doctrine of Faith (CDF), we remained steadfast in respectfully posing the question at the heart of the mandate: In what way(s) are we unfaithful? This haunting question carved a deep space within us and it allowed us to keep focused on the desire to engage in honest dialogue based on mutual respect."

Often after meeting with Vatican officials, they shared the results with the LCWR board as well as the larger LCWR membership. This meant hours/days of tedious meetings. Building community led to acknowledging the emotional tone of individuals and groups, yet steadfastly seeing the importance of honoring the agency of women as part of a bigger picture.

They knew the Holy Spirit was guiding them, sometimes speaking through difficult questions, encouraging the bearing of accusations with silence, begging for light. All of this and more left leaders weary. However Long the Night, they trusted a corporate wisdom would evolve into light.

The extent to which the mandate resonated with people outside the LCWR organization compelled us to consider how we would chart a path forward. We realized that the components of the mandate were not only about LCWR as an organization or as a group of women religious leaders. Rather, there was a deeper conversation that yearned to emerge, a broader understanding of the core issues, and a profound movement of the Spirit prompting all of us to discernment and fidelity in new and challenging ways. The CDF mandate was about an adult, educated laity, in this case a group of women religious whose vision of a Vatican II church had guided their renewal, framed their discernment for more than 50 years, and claimed their fidelity.

As I finished reading this prophetic step into the future, I recognized how often women religious and those who support them appear to cloak their expertise in a simple 100-percent cotton blouse. They say little about who they are or where they've served.

It is the mission of Christ that they wear, whether in a board room, a chancery office, classroom, hospital, standing with immigrants, or defending the position of women who are also "the church."

Thank you, LCWR, for Being Church, "however long the night."

However Long the Night: Making meaning in a time of crisis

The pride I felt reading the reflections of the LCWR presidency who were in office as LCWR discerned and navigated the rough waters of the Congregation for the Doctrine of the Faith mandate, was overwhelming.

Having been part of LCWR since the late 1970s as an associate, then as a member, and now as a former LCWR president, I lived through the years thT both stirred the Vatican waters and then courageously calmed them. Even though I experienced these women's leadership personally, I was deeply moved as I read their reflections and felt such an honor to be part of LCWR and religious life.

What these women offer is a very intimate and clear look into the process of communal contemplation and dialogue. They write as individuals but individuals who understand the power of sharing insights and allowing the new to emerge from their collective wisdom.

They emerged from the much larger body of elected leaders throughout the United States who had committed themselves to deepening their contemplative practice both individually and congregationally over these past decades.

They were elected from the body of women religious to serve at this particular time, and they responded in a way that speaks directly to the situation we face as a nation.

How do we speak to those who have different assumptions, beliefs and worldviews? How do we remain whole and act with integrity? How do we face into our own biases and prejudices so as to respond out of a contemplative heart?

How do we begin such a process of dialogue, not knowing if those with whom we engage are even open to the possibility of change?

These women's capacity to respond to such questions was intimately connected to their prayer, their contemplation that made them transparent to themselves.

They faced their own biases and worldviews. They allowed for their emotional reactions and then went deeper, finding out what was underneath, causing such a reaction.

They owned their own needs and preferred ways of acting, and let them go to see if some new, collective way would emerge to serve the common good of LCWR.

What developed was a freedom. A courageous freedom to meet those appointed by the Vatican to oversee the mandate — with a mutuality and respect that was disarming.

Having both the theological background and skills of dialogue and process, they were able to create a different environment, inviting a new way of speaking and listening into the room. They believed that shifting the energy to be one of love, curiosity and exploration does effect change.

Their journey over years is perhaps more than we can imagine happening in our nation where attention spans are minimal; capacity to listen or to dialogue underdeveloped; self-reflection sorely lacking; willingness to admit where one was wrong and then change is seen as weak; and deepening one's interior life so as to touch the mystery of the divine is too often avoided or ridiculed.

Yet, this is exactly what we need as a nation to begin to heal the polarities we are experiencing.

I would strongly encourage the reading of these reflections. They reveal from the inside out an amazing process of transformation. I believe there are many people who are ready to change who know that we must imagine new ways of being and doing if we want to survive as a planetary community. This book is a great place to begin.

[Nancy Sylvester is a member of the Sister Servants of the Immaculate Heart of Mary, Monroe, Michigan. She founded the Institute for Communal Contemplation and Dialogue in 2002; it offers numerous programs and resources to deepen contemplation and dialogue. She served in the LCWR Presidency 1998-2001.] 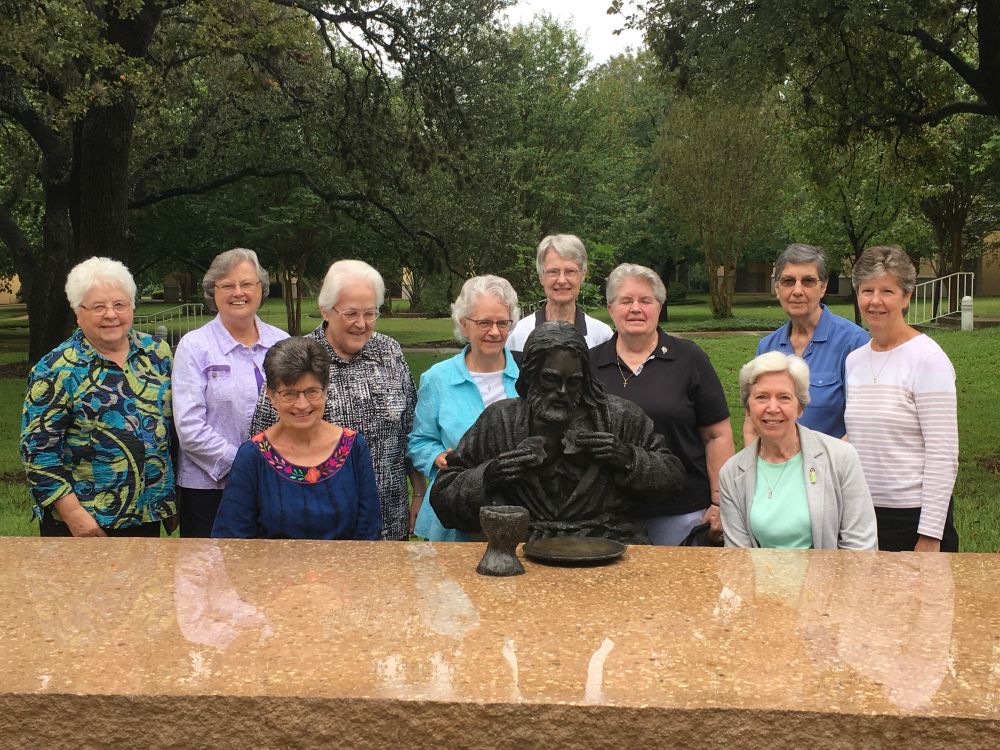