Reflections from Pope Francis' 2017 World Day of Peace message, "Nonviolence: a Style of Politics of Peace," continue to unfold as the year rolls out new opportunities and challenges. These different encounters invite each person to actively seek to engage in peacemaking through nonviolence at the grassroots.

Some think working for peace belongs to those in the public arena, like heads of government, nongovernmental organizations, or church officials, so they do not attempt to lend a voice or a hand. Furthermore, some think "politics" to be outside the domain of ordinary people. But the essentials of the "politics of peace" — or nonviolence — reside in the ordinary and can be discovered in the home, "where the heart is."

Scripture employs the imagery of a heart to explain the nonviolence theme, as in Mark 7:21: "It is from within, from the human heart that evil intentions come." That is to say, nonviolence as well as violence reside simultaneously in the heart.

There is a wonderful example of a homegrown style of the politics of peace in a biblical character, Abigail (1 Samuel 25). The thought of Abigail as a model of nonviolence, particularly in the home, has remained with me since reading the pope's insightful New Year message.

Abigail, a name meaning "my father rejoices," captures a father's happiness in having a female child, regardless of patriarchy. We have similar such designations in my native Etcheland, Nigeria. Names like Nwaoñunna, Nwanyinna, or Uchenna closely approximate the Hebrew "Abigail" and reflect the delight of a father in his girl-child.

Abigail truly justified her father's joy in her by her perceptive sense of danger. Abigail was married to Nabal, a wealthy rancher in Carmel. Nabal was tactless in dealing with his adversaries, an action that could have had dire consequences.

Nabal, who was politically opposed to David and supportive of King Saul, disparaged David's servant who asked him for provisions for their little band of fleeing asylum-seekers. By verbally abusing David's men who asked him for some food, Nabal jeopardized the safety of their entire household — an incident that would have unleashed violence on the people of Carmel.

But Abigail saved the day. Her diplomacy and astute sense of the politics of peace prevented the bloodbath David threatened against Nabal and his people. Abigail's action confirms that nonviolence, a way of peace, is born in the home, that building block of society, where women play fundamental roles in life's processes.

In seeking peace, Abigail, a keen strategist, knew when to overlook and when to confront. In her pursuit of peace (Psalm 34:15), she disregarded Nabal's gaffe. This female peacemaker knew also how to make a respectful appeal to an aggrieved party, as well as when to remain silent. Though obviously intelligent and gifted, Abigail did not promote her own agenda, but was firmly fixed on restoring harmony between her household and David.

This "delight of her father," Abigail, provides a fine pattern of courage under pressure. Though her peace initiative was fraught with difficulties, she kept the peace and quelled a looming evil by trotting through rough terrain, through "a mountain defile riding on an ass" (verse 20), bearing a large quantity of varied food items for her husband's adversary.

Abigail's moves show clearly that nonviolence is not synonymous with either passive resistance or even pure nonresistance to evil — that is, an unrealistic submission to oppression, tyranny or injustice. Thus, lacking military capacities and the pomp of patriarchy, this peace-loving woman used what was available to her, a heart and a home, and nonviolent processes as strategic and powerful instruments of resistance in preventing further oppression. History has shown similar stances taken by oppressed groups, particularly those in minorities, who do not have sufficient power to stand against their unjust oppressors.

Last month, I had a chance to share some thoughts from Pope Francis' message with a small group of parishioners at Holy Trinity parish in the Tere-Ama section of Port Harcourt City, Nigeria.

The example of this unsung biblical heroine of nonviolence, Abigail, had a deep and profound impression on the group at the Holy Trinity parish. Almost everyone left the gathering with a more positive attitude toward peacemaking through nonviolence.

My friend Uduak said she was touched by Nabal's imprudence and how his badmouthing could have resulted in the massacre of his entire household. She resolved to guard against using violent expressions.

A few others acknowledged they had an "aha" moment in the homegrown nonviolence movement and would test their resolve during the Lenten season this year.

But the thought of Abigail, the peacemaker, carried the day. Some said they had heard the Abigail story for the first time and wondered why it is not included in the lectionary so the narrative can be read, heard and preached at least once every three years. It seems to me that theologians who put together the lectionary readings appear not to consider the experience of a female peacemaker seriously because of her gender, thus diminishing women's contribution toward the improvement of our common humanity.

Theological writings on the eventual marriage between Abigail and David (verses 40-42) seem to downplay the significance of Abigail's peace effort. For me, the focus on the marriage missed the point of the story, which is consistent with achieving peace through nonviolence. Reflections on biblical models of nonviolence and peace like Abigail can have a positive influence on people working toward nonviolence as a style of the politics of peace.

[Caroline Mbonu is a member of Congregation of the Handmaids of the Holy Child Jesus and holds a doctorate from the Graduate Theological Union. She is senior lecturer in the department of Religious and Cultural Studies at University of Port Harcourt, Nigeria.] 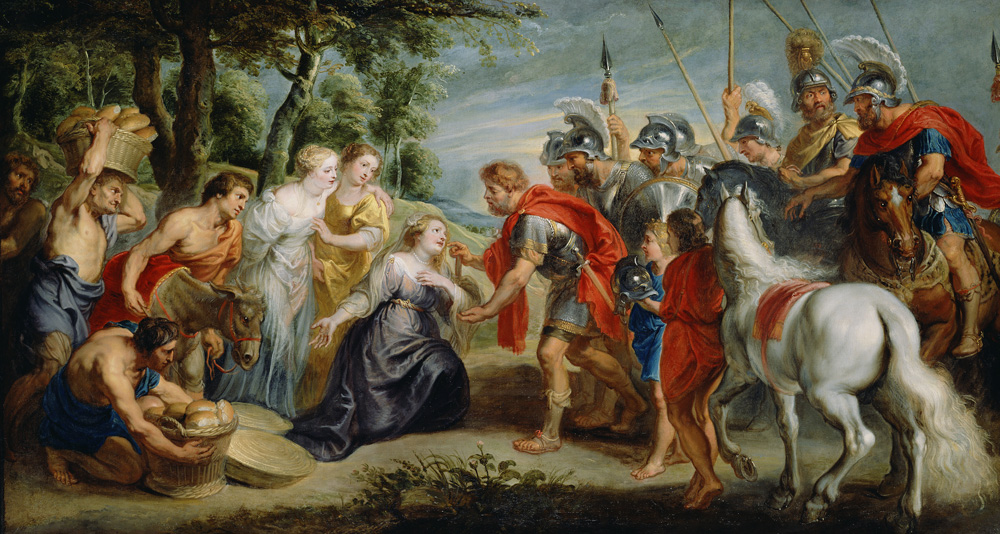