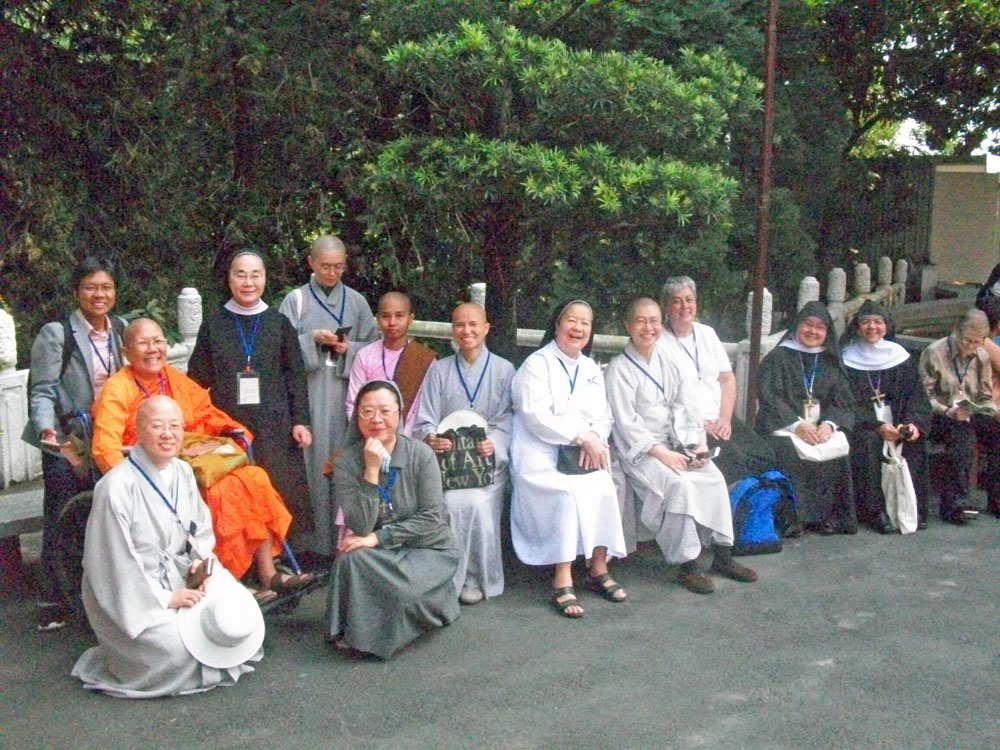 Informal gatherings showed the variety of nation and garb at the "Active Contemplation and Contemplative Action: Buddhist and Christian Nuns in Dialogue" event in Kaohsiung, Taiwan. (Judith Sutera)

Half of them were Buddhist and half Catholic, from 17 countries, all invited by the Pontifical Council for Interreligious Dialogue for a meeting entitled "Active Contemplation and Contemplative Action: Buddhist and Christian Nuns in Dialogue."

The dialogue was organized in collaboration with Fo Guang Shan Buddhist Monastery, the Association of the Major Superiors of Religious Women in Taiwan and Dialogue Interreligieux Monastique/Monastic Interreligious Dialogue.

According to the Vatican's press release, the two main objectives were:

This followed comments from Pope Francis in June 2017. Speaking to participants at the plenary session of the Pontifical Council for Interreligious Dialogue in June 2017, Francis said:

"Many women are well prepared to take on encounters of interreligious dialogue at the highest levels and not only on the Catholic side. … Today more than ever, it is necessary that women be present."

Since the time of Thomas Merton, the church has given a special charge for dialogue with Buddhists to those in the Benedictine and Cistercian traditions because monastics already share a common language. While the theological reasons behind our lifestyle are very different, the practices are much the same. There is no different word for a Buddhist nun and a Catholic one and, in fact, a case can be made that the origins of our monastic practices were influenced by contact with Buddhist monasteries. 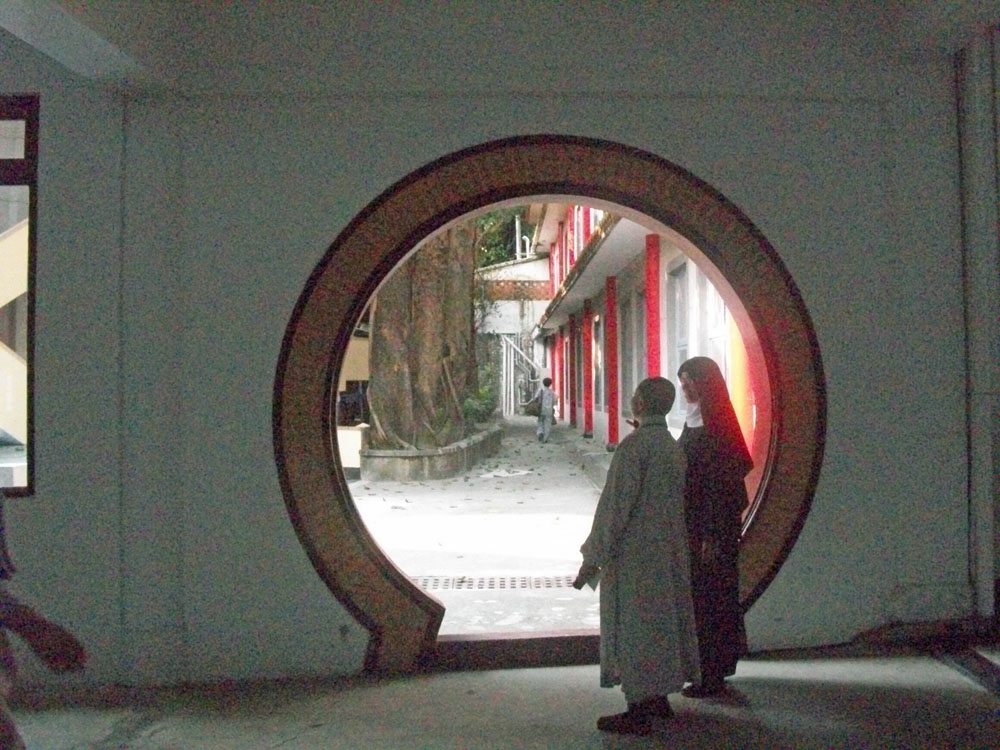 Thus, most of the Christian participants were invited through the Monastic Interreligious Dialogue, which sponsors regional boards that engage in dialogue in many countries and regions, but this was the first international gathering. Additionally several other non-Benedictine sisters were selected by the council for their work in Asian countries or their expertise on particular topics.

The site of the conference, Fo Guang Shan, was itself a highlight. While one might hear "monastery" and envision a place of simple worship and retreat, Fo Guang Shan is actually a monastic city covering three mountainsides. In addition to the several hundred monks and nuns and the massive museum complex with its 36-story-tall Buddha statue, there are theological colleges for women and men; buildings for calligraphy, translation, publishing, broadcasting and other works of evangelization; multiple large shrines for worship; and several hotel-like facilities for conferences, tourists and retreatants.

The importance of this meeting only struck me when we walked into the room on the first day, received translation earpieces and took our places in a tiered semicircle that couldn't help but remind one of a mini-United Nations. Dignitaries, trailed by photographers, entered the room for the formal opening: the head abbot and leaders of the hosting community, Archbishop John Hung Shan-chuan of Taipei, officials from the pontifical council, Benedictine Fr. William Skudlarek, secretary-general of the Monastic Interreligious Dialogue from Rome, Msgr. Slađan Ćosić, the apostolic chargé d'affaires of Taiwan (there is no apostolic nuncio because of issues around diplomatic recognition of Taiwan and mainland China), and representatives of the Taiwan Ministry of Foreign Affairs and the World Council of Churches in Geneva. 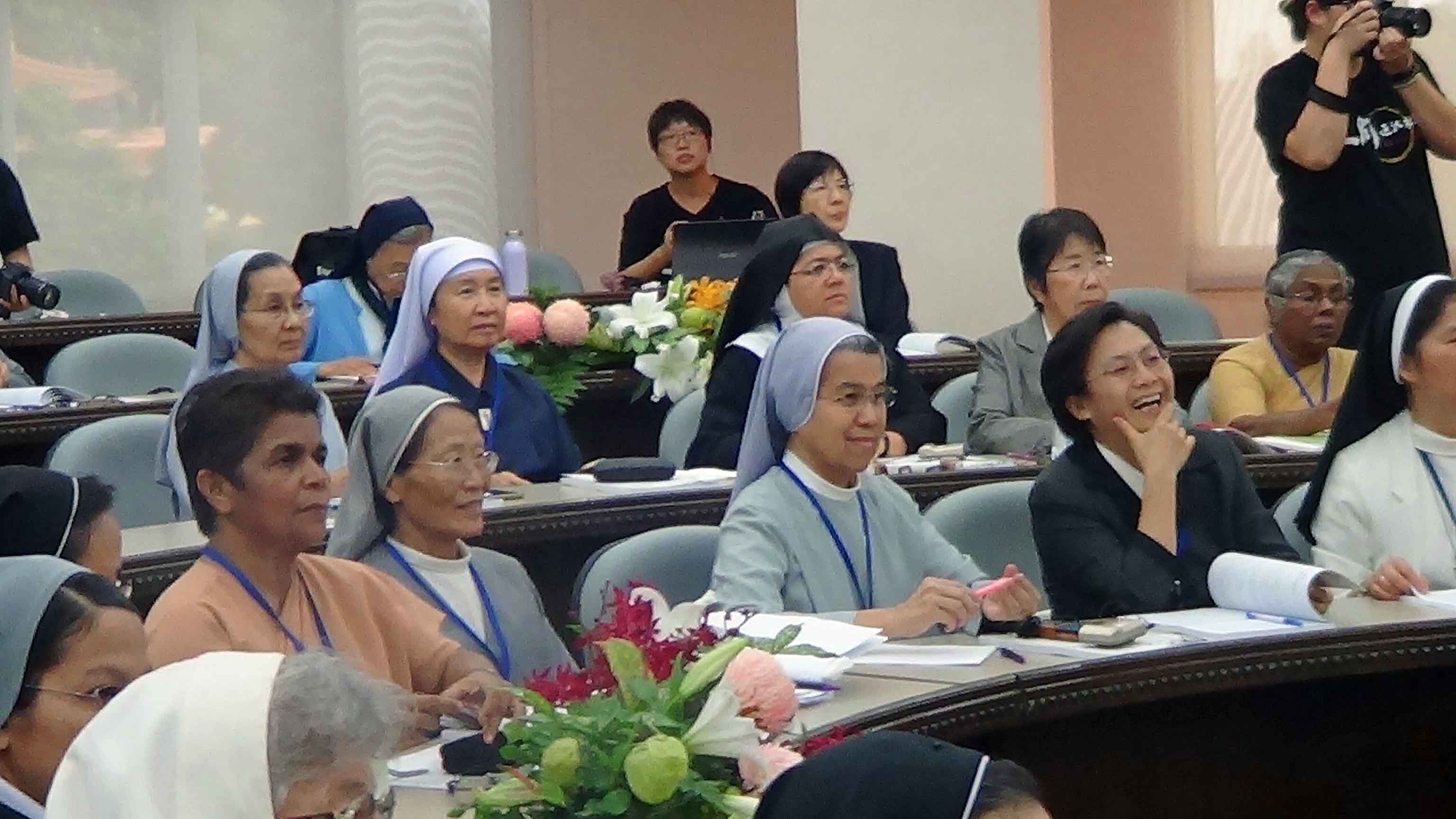 We covered a lot of ground in one week. Those giving presentations were informed of our topics and expectations months earlier, so that all the talks could be provided to the group in both English and Chinese. Among the topics were the history of women's monasticism in the two faiths, understandings of contemplation and action, prayer forms and service to the world.

Several presenters described efforts at making contemplative life relevant to the laity or integrating elements from one another's practices. For example, women from both traditions described ways in which they are incorporating meditation practices into their work with school children or adults.

Joint peacemaking efforts in places from the United States to Cambodia were examples of cooperation for the greater good. A session entitled "Religious Women Promoting the 'Feminine Genius' " focused on the importance of religious women in the faith life of a culture and the special gifts they bring. Among others, the Rev. Dr. Simone Sinn, the representative from the World Council of Churches and a female Lutheran pastor, spoke with optimism and enthusiasm about the role women must play in the world.

There were also group discussions, lively conversations during meals in the conference center, visits to the Female Buddhist College and the Buddha Museum, and attendance at the daily chanting, monastic breakfast and Eucharist/vespers.

The topic for small group discussion was dear to everyone's hearts: vocations. It seems that every religious community (and I've had conversations with American Hindu nuns as well) is challenged in trying to get contemporary young people to consider monastic life. Even in developing countries it is becoming more difficult to attract new members as family size decreases and opportunities for women increase.

All concurred that religion has become much less important in people's lives, and that changes in culture and technology create a climate that does not value such monastic traits as obedience, humility, simplicity and self-denial. Some participants also came from countries that still suffer from great gender inequality, have governments hostile to religion, or experience animosity between religions. Across the world, all are conscious of advancing age, diminished numbers and financial issues within monasteries as well.

Among strategies we recognized as important were those that engage directly with young people. These included helping them to use technology responsibly, teaching them to slow down and be attentive to their interior life, and helping them to see that religion is more about growth in personal faith than about institutions that many feel have betrayed or ignored them.

The hope for the future is summed up in the headline on the Vatican News website: "First international Buddhist-Christian dialogue for nuns asserts they can be powerful witness." A final statement acknowledged the event "was a landmark to foster mutual understanding and friendship among us as religious women so that we may be able to build bridges connecting our different spiritual paths."

According to the statement, participants recognized that "while remaining steadfast in our respective deepest convictions, we can learn from one another how to enrich ourselves spiritually, culturally and socially, and thereby become humble and credible witnesses for our brothers and sisters."

The women religious "believe that our witness to a way of life that can be meaningful and joyful through detachment from consumerism, materialism, and individualism may encourage others to walk on the path of goodness."

Some may ask why the church would hold such an event and for what outcome. For starters, it helped 70 women get to know more about women around the globe, both those in their own faith tradition and in one which may seem very different, but which holds the same desire to seek spiritual fulfillment and to love all creation. Concern for that creation and the threats to the environment were repeatedly voiced, as were concerns about peace and justice.

We all recognized the tension between being contemplative and active, between being open to the world and being clearly countercultural. To know that others care and that there are many possibilities for social action across religious divides is energizing, and a sign of hope.

Each of us returns to a community with ideas to share, information to teach others, and encouragement to continue in her own path to holiness. We are now 70 women more prepared to help build the bridges that will bring us into a future that is more inclusive, globally conscious and welcoming of those who may not share our beliefs but embrace many of the same values.

Surely the effects will not stop at 70 women.

[Sr. Judith Sutera is a member of the Benedictine monastery of Mount Saint Scholastica in Atchison, Kansas. Her academic background is in psychology, sociology, counseling and monastic theology. A director for lay oblates, she also teaches novitiate courses in monastic spirituality and works with the Sophia Retreat Center in Atchison. She is editor of Magistra and The American Monastic Newsletter.]

The Canaanite woman spoke for us