Faith that gives us courage to hope 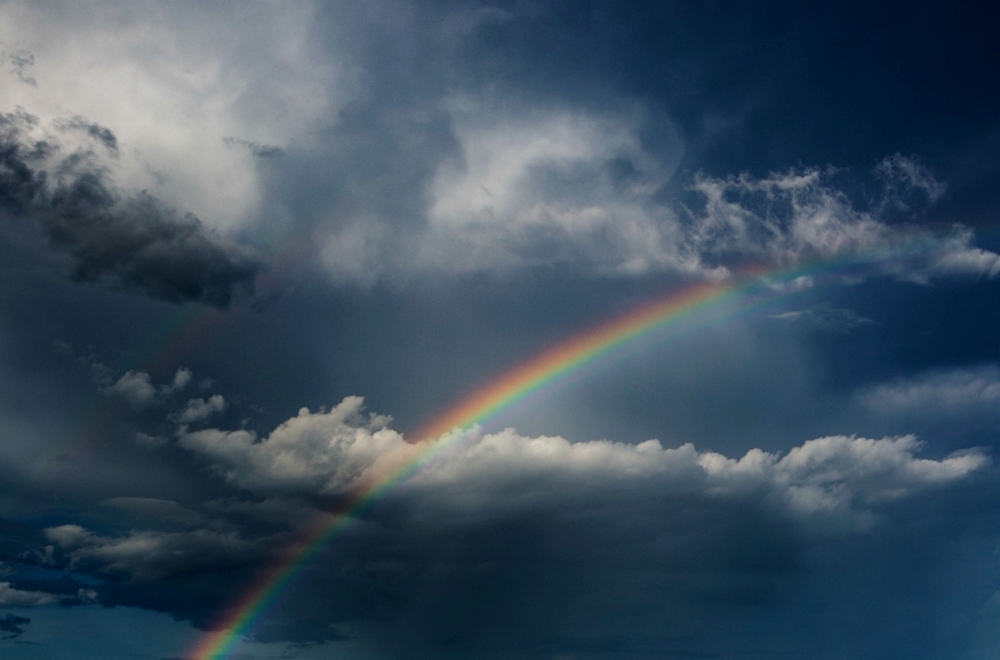 I have a memory. I was in my late 20s and I was in summer school working on a master's in pastoral studies. I had experienced a very stressful year. There had been chaos and confusion in almost every part of my life. I was tired and discouraged.

I was staying in a high rise right on Lake Michigan and the vista outside of my window was usually breathtaking. It was early morning and I was alone, praying my office. Even today, almost 50 years later, I can remember the numbers on the psalms in that morning prayer — Psalm 42 and Psalm 43. Internally, I felt dark, distraught.

Three times these sentences were repeated in the psalms of that morning prayer and I prayed them aloud with great feeling. "Why are you so downcast, O my soul? Why do you sigh within me? Hope in God! For I shall again be thanking him." As I prayed it aloud the last time, I glanced out the window. We were in the midst of a terrible storm, one that reflected my internal state. I could not distinguish the sky from the water, everything was bleak.

As I looked out, a huge rainbow spread across the darkness! It didn't drive away the rolling storm. It still raged on, but the rainbow was clear. At that moment, something shifted inside of me. The circumstances of my life had not changed, just as the storm had not, but I was changed.

I felt such a surge of hopefulness, even joy, despite what I was facing. The feeling was so deep and so profound. That feeling stayed present and strong the whole summer. I knew with certainty that God would always be with me, and that I was loved. No matter what has happened since then, that certainty has never been far from me.

That was the year I was introduced to Julian of Norwich and Catherine of Siena. From all of her insights I have since enjoyed, I remember the first time I read Julian's passage: "Life is a marvelous mixture of well-being and woe." I certainly was aware that it was a mixture, but marvelous? That took some processing.

Then there was Catherine, who spoke of the importance of "the cell of self-knowledge." There was so much wisdom in the writings of these two women. They continue to influence me even today. I learned so much that summer. Since that time, I have come to realize that every part of my life, the good and the not so good, is blessing. I learned, too, that most growth occurs in the moments of struggle.

Today, we face a world of chaos and confusion. On every continent, there is war and terrible suffering. Here in the United States, our political system could hardly be more polarized and unstable. Refugees — of which there are a multitude — face such hostility, and they are often turned away, arrested or face death for a lack of caring by our unfeeling nation.

The gap between the rich and the poor is growing ever larger everywhere. We haven't resolved the issues of human trafficking and abuse; racism and white nationalism are on the rise. Violence seems to be right at the surface almost everywhere. The threat of new wars is ever present.

The temptation for many is to despair. But despair only lets the darkness win.

God, the Light, is ever present in our world. If we really look, we will find that Light, the rainbow of events that reflect God's goodness.

Small and large acts of courage and human kindness do not often hit the front page, but if we look and if we listen they are there: children who for their birthdays do not want gifts, but rather help in collecting clothing for the poor; a young man who rushes toward a terrorist and, with his death, saves his classmates; a sister who, in her retirement, brings palliative care to elderly, sick inner-city residents; a wealthy man who pledges money and additional resources to his hometown to provide free preschool; a CEO of a company who pays $51,000 to a school district so that students who didn't quite qualify for help but couldn't afford the cost of lunch could receive hot lunches.

We can always find individuals living in a way that reflects our common unity, and showing the respect that every person deserves — because they are created out of love, for love.

Sometimes our crazy and chaotic world appears overwhelming, and that paralyzes us. We feel there is nothing we can do because the problems appear to be so large. It is especially in those moments when our faith in a loving God — who lives in our midst and within each of us — provides the courage to hope.

It is in hope, and filled with God's love, that we realize that all of life is interconnected. Then we know that every good and loving act, no matter how small or how big, creates a ripple effect and makes a difference in our world.

[Nancy Westmeyer is a Third Order Regular Franciscan from Tiffin, Ohio. She started a 501(c)(3) organization, Vision Time, to lead parish missions, priests' retreats and parish renewal workshops, and to provide leadership assistance with structural change for small businesses. Having established a Servant Leadership Center, she is now writing a book on servant leadership.]

Spirituality | Faith that gives us courage to hope

Adieu my friends, until we meet again

Reclaiming the Holy Spirit and renewing the face of the Earth

Looking forward into the mystery