I would never help a worm cross the road 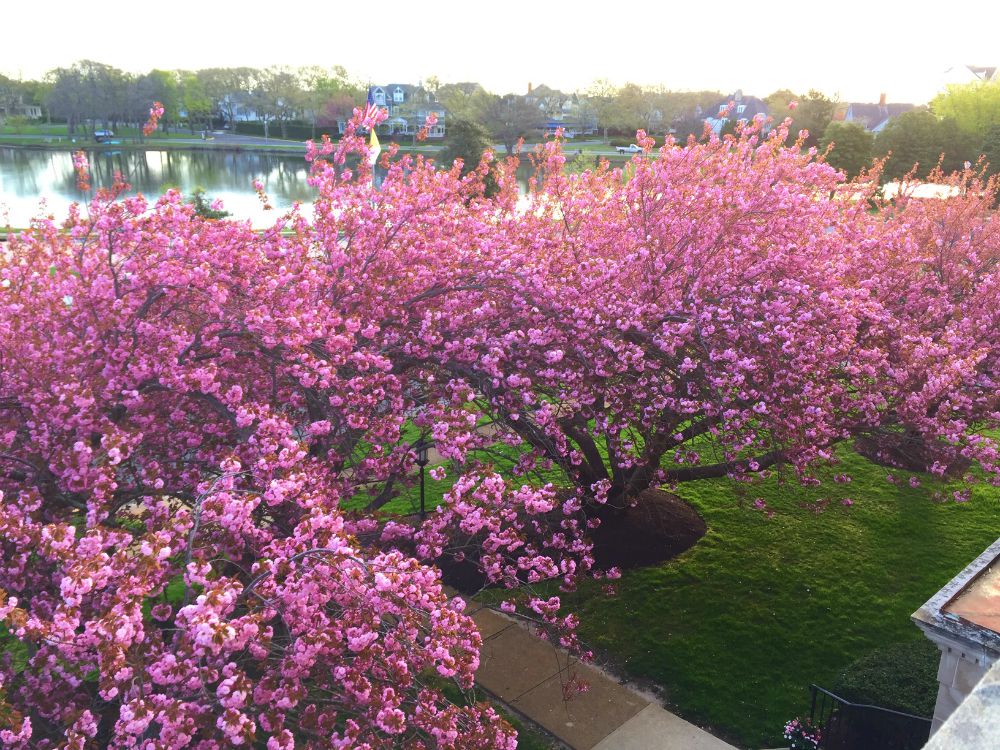 It's spring in New Jersey, and heavy rains are driving the earthworms up from underfoot. One greeted me this morning on our mutual path to the compost pile — me with egg shells and orange rinds, and the worm with its pick and shovel.

You may have seen, wherever you live, worms pushing and pulling the pinkish extents of themselves, up a sidewalk or across a street. You may have wished to be of some assistance in their journey or merely wished to avoid doing them any harm … (oops …squish).

Overhead, cherry trees surround St. Catherine convent. The are laboring to stay as beautiful as we yearly expect them to be, but their wet pink crinoline blossoms are weighing them heavily down as an opulent spring nor'easter lets loose its rain. Too much of a good thing is too much.

We understand why worms surface in the rain … they want out of soggy soil. They breathe through their skins and need to be moist, but in too much water they suffocate. On the road it's no picnic either. Desiccation or worse.

But I would never help a worm across the road. Not that I haven't tried. Compassionate techniques include: the stick method, where I sought the perfect stick — not too long and not too prickly — strong enough to carry the weight of a worm.

Once I peeled an oak twig and stuck it strategically under the limp and legless creature before me — on whose behalf I was giving up a sizable chunk of my morning. I lifted and aimed the direction of my rescue at the grass on the south side of the road … but to which side had the worm been headed in the first place? And which of its nearly identical ends was the business end in charge of the trip?

Thus, I worried as it dangled from its wooden lifeline until it fell, or jumped, and landed right back where it had been — before help came. It hit the ground in a sort of quizzical shape as if it had positioned itself at the end of the sentence, properly punctuating my philosophical dilemma.

I've also tried the leaf method — snow plow action, approaching client lengthwise. But the worm merely rolled and resisted as if the leaf were why it had left the territory it was fleeing in the first place.

And then there was the combo leaf and stick method — thoughtfully improving the inadequacies of the former protocols — stick for lift, leaf as safety net — as you may have imagined. Results? No additional data. Leaving me with several open-ended questions:

Was this worm meant to cross the road? Was I meant to figure into its survival? Or was this simply a case of serendipity hijacked by misdirected fellow feeling, loaded with urgency by my forethought of tragedy? (Squish …oops.) Or just plain hubris on my part? Who, by the way, had invited me to care? Clearly I did. I do.

This reflection could as easily have been about cherry blossoms — the pretty ones in the photograph. But today I've been hooked like a fish by a worm — its otherness — for which no picture is provided.

I look and watch as this creature, aimed at the compost pile, manages what I presume might be its morning commute, quite innocent of my attention. I look and look, and then comes tenderness, and as with any stranger, whose eyes you let meet yours — loving kindness. I see life pulsing through each segment of its luminous, limbless body — the same un-dis-connected force I feel in me. I know we are kin.

The longer I look, the plainer it becomes: This is no "it."

But how shall I call … it? Hermaphroditic as worms are, both "he" and "she" would do. Now a philosophical dilemma becomes a grammatical one as well.

Enough! This creature has her work to do, and skill, and vows before the Universe to do it.

Ecology textbooks teach us that life as we know it cannot persist without the most diminutive lives among us — bacteria, fungi, insects, worms.

But what are we to annelids?

Don't they make us wonder if they wonder who we are? And who, in fact, are we if not foremost  — ennobled recipients of their alchemy of excrement. Darwin himself praised worms and doubted whether many other beings were as responsible for the flourishing of life on Earth as worms were.

Earthworms suck hard cold dirt into the moist pink straws of their bodies and give back — out their other ends — castings of immeasurable wealth to sweeten our soil, feed our spinach and our kale, put color in the cheeks of our roses, plump our robins.

Poet Theodore Roethke calls them the "intrepid scholars of the soil." For hundreds of millions of years they've sculpted Earth's hostile rock into forest floors and garden beds — laid out welcome mats with menus for strangers who would never breathe, or eat, or see, or think without them — complex-er beasts who regularly, mindlessly swallow or squash them, and worse — think of them as "lowly as a worm."

This piece might have been about cherry blossoms — right above me there's a sky-full of them, flirting with the northeast wind.

But instead this is about worms:

Worms, who eat dirt and leave cherry trees behind them.
Worms, without opposable thumbs, or valid pronouns — or need of them.
Worms, flung across the galaxy, as we are — partners on a planet whose very being,
and whose every creature is an intertwined homage to our Creator.
Would you help a worm across the road?
How would you?

Spirituality | I would never help a worm cross the road