by Janet Gildea
Spirituality
This article appears in the Inter-Mission feature series. View the full series. 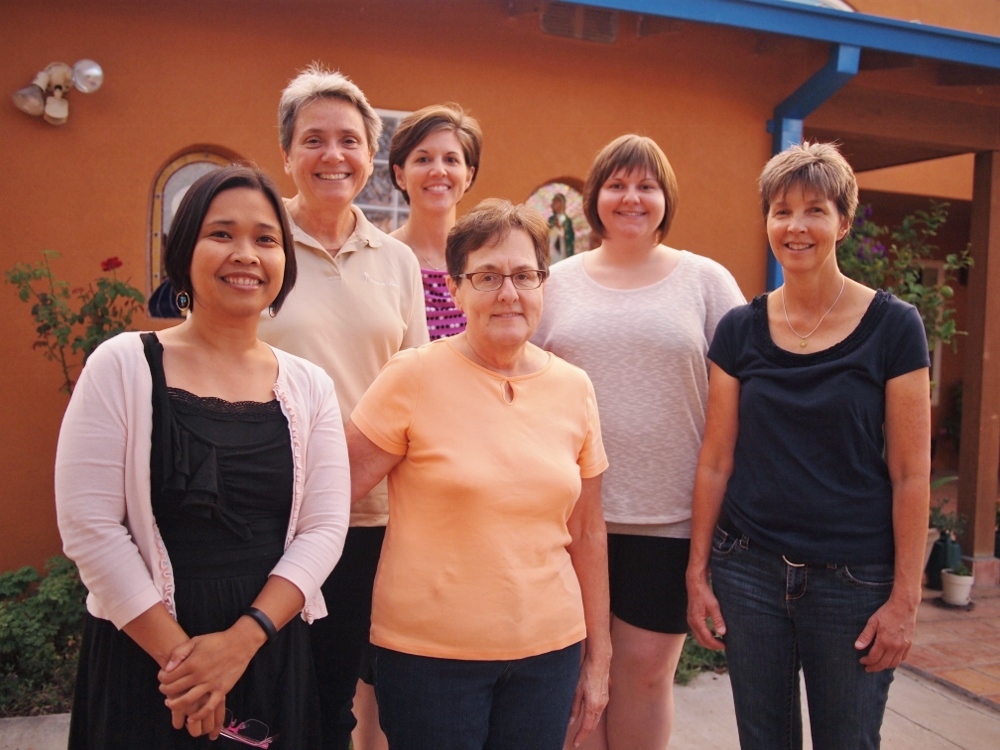 Most cancer survivors will admit that they never quite stop looking over their shoulders to see if a recurrence is creeping up on them. Having been caught by surprise once, nobody wants to be blind-sided again. My initial experience of ovarian cancer came in February 2008 when I was 52 years old, a Sister of Charity of Cincinnati practicing family medicine at the U.S.-Mexico border near El Paso, Texas.

Stage IV at diagnosis, everyone including myself was amazed that I went into complete remission after surgery and an initial course of chemotherapy. Six years a survivor, I never tired of hearing people say, "You are a miracle!" But each follow-up visit, each PET scan, each lab test for the cancer marker raised the specter of a recurrence. In February 2014, just as the oncologist was suggesting that we decrease the frequency of those surveillance tests and the insurance company was beginning to balk at the costs of the same, a “little something” glowed in my chest on the PET scan. September is Ovarian Cancer Awareness Month and on September 15, 2014, I was diagnosed with recurrent ovarian cancer in two lymph nodes on the outer lining of my heart.

I finished a course of radiation in November, and I heard the glorious words, "Your PET scan is totally clear!" I heaved a sigh of relief and spent the month of April at the New Jersey shore to cap off my recuperation and to see if I could begin to write a book about my journey with cancer, its recurrence and the transition to back to a new normal again. The project flowed well and I returned home to the border determined to continue writing on a regular schedule. But as I picked up my other ministry commitments and life resumed its usual pace, the document lay dormant.

July brought the next scheduled PET-scan. "It looks good — no change," the doctor said reassuringly. Gazing at the report over his shoulder however, I noticed findings that were not present on the previous study. Walking the fine line between actively-involved patient and overreaching physician, I called the differences to his attention. Within a matter of seconds the conversation shifted, and I heard words that hurtled me out of remission: recurrence, biopsy, chemotherapy. The actual decision about how to confirm the diagnosis and the arrangements for surgery and insurance coverage seemed to happen in super-slow motion, and it wasn’t until another Ovarian Cancer Awareness Month, at the beginning of September 2015, that I awoke from surgery to learn that the cancer had recurred in another lymph node in my chest.

I have had four months to come to terms with the probability of entering into a time of chemotherapy. It feels very different than the shock of my initial diagnosis in 2008, an experience than Jean Shinoda Bolen has described in Close to the Bone: Life Threatening Illness as a Soul Journey as "a personal earthquake." My sensors not only detected what was coming, but I also knew how to use the waiting to prepare myself for the shocks ahead. From very practical details, such as knowing when to expect the loss of my hair and what type of liquids I find most palatable, to how to gather my spiritual and emotional resources, I have been able to get ready for this experience.

Visualization has been one of the helpful tools both to prepare me for treatment and to sustain me in its aftermath. In prayer I call on five spiritual "mothers," three from my Sister of Charity tradition, as well as my own mother and Our Lady of Guadalupe. I have invited these dear women into my presence while lying under a radiation beam, trusting their hands to direct the energy exactly where it was needed and to protect my vital tissues from harm. During infusions of chemotherapy I give each of them an area of responsibility, and I find great comfort in their presence. Although I just happened upon this practice, a spiritual director suggested that it is perhaps a form of kything, a tradition that has been around for a very long time. What I know is that it brings me a sense of inner companionship during moments that are particularly lonely.

I have had time to consider what I will be able to do during chemo and what I will need to let go or put on hold. I cleared my calendar as much as possible for the next four months. I talked with my community and close friends to help me make some of the difficult decisions about where and how to use my energy. I spent time upfront establishing balance in my life rather than frantically trying to do as much as possible up to the moment I started chemo. This meant asking others to take on some of my responsibilities — and not feeling guilty about it. I had a great confirmation of this decision when I turned my wall calendar over to October and read, "Accept the gift you have given to so many people. Let people love you back." Excellent advice, especially during this time, thanks to Jeanette Osias.

In 2008, with an advanced cancer at diagnosis, my treatment time inaugurated a radical reorientation of my ministerial life. During the four months of chemotherapy I had the grace to wonder, "For what are you healing me, O God?" What became clear to me was that I was ready to leave medicine, the profession that had been my first calling and to which I had dedicated the prime of my life. And so I did.

With whatever time I had left, I felt a call to serve in a capacity directed towards future generations in the church and in our congregation. Interestingly to me, as I lost all my generative organs I felt a surge of generativity, as though a creative energy was unblocked within me. A sense of urgency gave me the courage to imagine something new: a part-time diocesan ministry with young adults, while I resumed my congregational position as coordinator of vocation ministry and served with my sisters at Proyecto Santo Niño, a day program for children with special needs in Anapra, Mexico. As I finished chemotherapy and began the transition to survivorship, I felt that I had been "re-missioned."

What will this new course of treatment hold for me? Having experienced six years with NED (cancer lingo for "no evidence of disease"), I can hope for that again. The possibility alone gives me a different perspective as I begin chemotherapy. Instead of dropping everything as I did during treatment the last time, I feel that I will be able to continue some home-based ministries that feed my soul. One of those is directing the pre-novitiate program for three women discerning with our congregation. The experience of intentional community living is a key part of the initial formation process. Living together in community in New Mexico during the next year we desire to create an environment where all of us can listen with our hearts to discern the “what’s next” of our lives. My experience of cancer treatment will be part of the mix as we learn to be sister to each other, sharing prayer and shouldering the chores and challenges of daily life and ministry.

An additional learning from last time around is that writing helps me make meaning of the experience of illness. This is what I hope to do as I write my way through the healing process over the next months in Global Sisters Report. I believe that this is a time of “inter-mission,” to live my call between remission and remission, when I have much to learn, to discern and to discover as I open myself to God’s healing ways.

[Janet Gildea, SC, has been a contributor to Global Sisters Report, writing on immigration and other topics from the U.S.-Mexico border. Janet began chemotherapy for recurrent ovarian cancer on October 6, 2015, an experience that she will be sharing in GSR over the next several months. Readers are also welcome to visit her blog, "Each Day Counts" at janetsc.wordpress.com.]

Inter-Mission: Springtime of body and soul

Inter-Mission: Springtime of body and soul

Q & A with Mother Mary McGreevy, chairperson of the Council of Major Superiors of Women Religious

Marian devotion inspires the cause of women