Journeys of faith by train in India 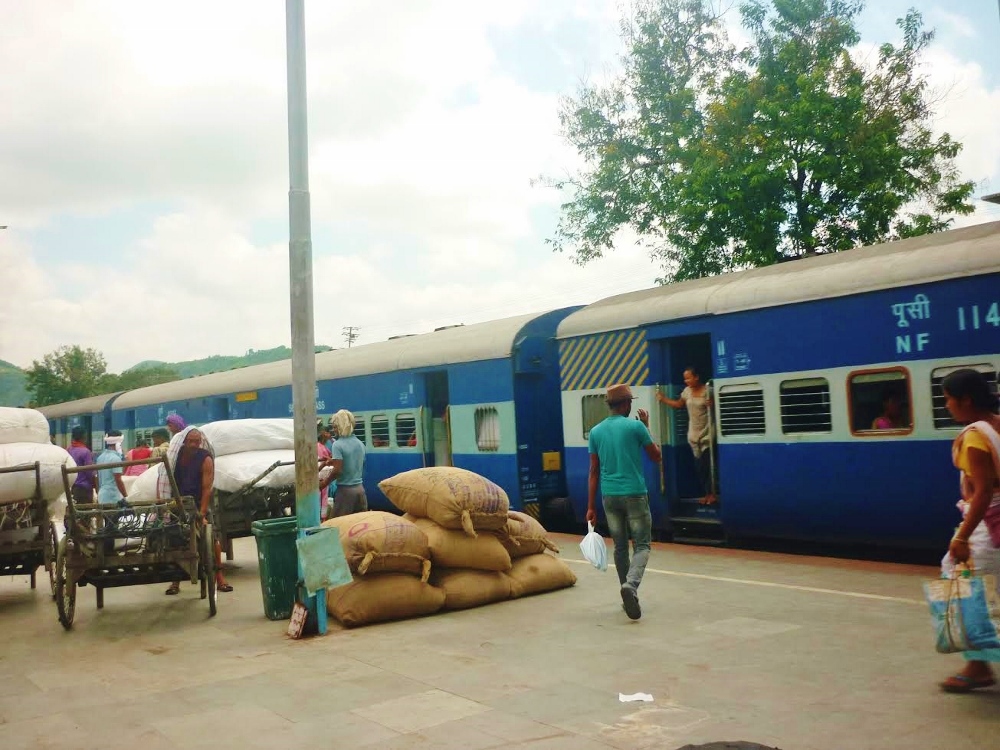 Travels give us one the most precious things in life: time with ourselves. For me, each trip has been an invitation to self-discovery.

As a Catholic religious woman in India, I have to make long and short trips, mostly by train, to the length and breadth of this vast country.

My longest train journey was from Thiruvananthapuram, capital of the southern Indian state of Kerala, to Guwahati, the gateway to the country's northeastern region. It took three nights and four days to cover 2,125 miles (about 3,400 km).

Long or short, journeys give me an opportunity to listen to others, say what is necessary, and of course, talk with courage and conviction about my faith in a country that is increasingly becoming intolerant of different beliefs and customs.

An advantage of being a Catholic nun is that strangers often confide in me about their anxieties and problems in life.

At the same time, a journey often worries me. I worry about my co-passengers: What type of people would they be? Would they accommodate my extra baggage?

So, I always begin every trip with a prayer to the Lord: You take care of them.

It was with that prayer that I boarded a train at Mumbai in early August to go to my convent in Nagpur in central India. I was delighted when I realized I was the only passenger in that clean compartment with cushioned seats. I placed my books on a side table. An hour later a man came inside and took the seat opposite me. He too sat reading.

I was carrying a complete Bible since I was preparing for a quiz program on biblical passages later in the month at my parish.

My companion was looking out of the window for some time. "Beautiful scenery," I blurted out. "Indeed beautiful," he responded looking at green-carpeted mountains interspersed with meadows and waterfalls as we whizzed past. Little springs ran down the mountain cliffs.

He then smiled and asked, "Are you a Missionary of Charity?"

"I am a missionary," I responded, thinking that he had meant the Missionaries of Charity Mother Teresa founded. For me all religious are missionaries of charity as they live for others.

My companion's smile broadened when he saw the Bible in my hand.

The Bible led to an enlivening conversation for the next three and a half hours. By then many more passengers had entered the coach.

Thus began a lively discussion on the Bible stories from both the Old Testament and the New Testament.

Later, I realized it was an in-depth journey of faith for me while for him it was the continuation of his search for a true, living God.

We went back and forth between the two testaments as the questions touched both books.

He also wanted to know how the divisions within Christianity came about. He asked about the pope, the Vatican, the Eucharist, Communion at the Mass. He had spent some days in Italy and in the Vatican while on a study assignment. "I attended Mass with the pope and received Communion," he said with joy. 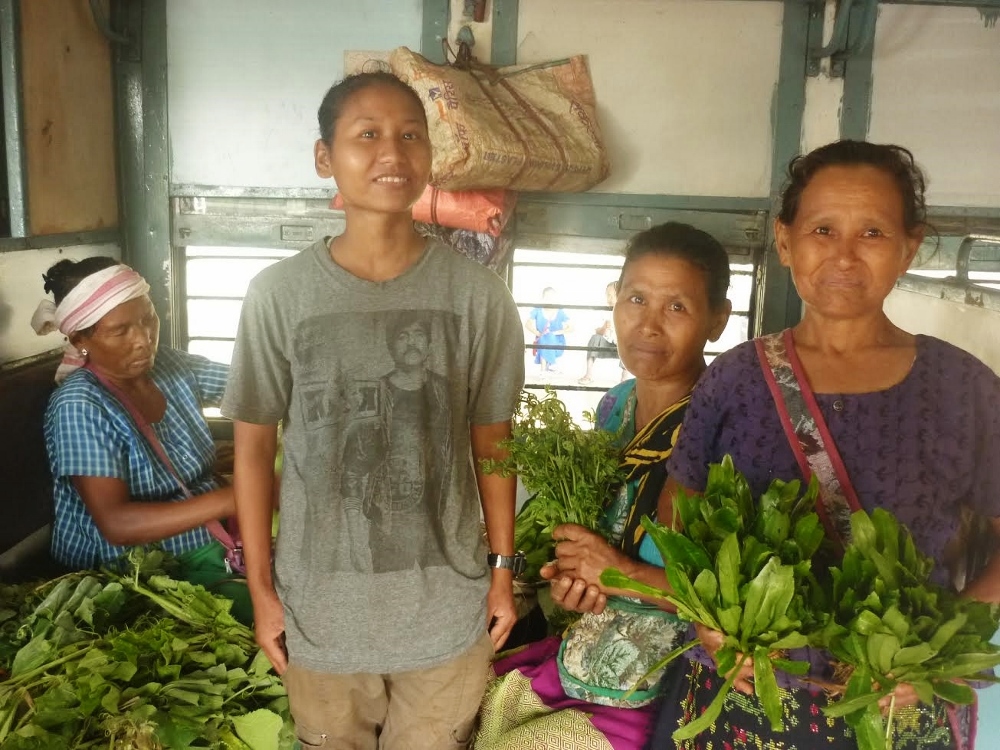 A teenager and her mother, right, carry vegetables on a train in Assam, northeastern India. They shared their breakfast with me aboard the train. (GSR photo / Lissy Maruthanakuzhy)

I gently explained to him that the Holy Communion was only for baptized Catholics. He understood.

As other passengers closely followed our conversation, I began to panic. I suspected some Hindu fundamentalists among them could find my talk as an attempt to convert a Hindu.

"Will I face any problem when I reach the station?" I asked myself. I felt relief, as my interviewer seemed really interested in Jesus.

At one point, an elderly woman intervened and began to talk to the man in Marathi, their mother tongue from western India. He pointed to me as he said, "She knows about Jesus and the Bible, and what she says is correct."

I was convinced he would save me if I were to face any trouble.

The man explained to me that he had grown up in an orphanage until he was 18. Various Christian denominations had visited his orphanage to organize programs for children. They also distributed copies of the New Testament.

The elderly woman then said, "Jesus was very badly wounded in his crucifixion. His body was full of bruises. After his burial, his friends took him away and brought him to Kashmir, and treated him and made him well. And he became a Hindu. What do you say?"

With a smile, I replied that my faith rested on my belief in the resurrection of Jesus.

It gave me much joy to speak of our God — a God who seeks out human beings, a God who loves us far more than we love ourselves. God's passionate love for every human being prompted him to send his only son to earth as a human being. (John 3:16)

Our energizing and thought-provoking conversation ended only when we took out our bedspread to sleep at around 10:30 p.m.

During another train journey, I met a woman who looked worried. She was going to the same town where I was headed.

Slowly the mother of two opened up. She was a Catholic who was worried about her daughter, an army officer who had decided to marry a Hindu boy. "She was always an obedient girl, a role model in her school and in the neighborhood," the woman sighed.

The boy refused to oblige a request by the girl's parents that he become a Catholic. As the girl remained adamant, the parents had to grudgingly agree to the marriage.

"Maybe God is using her to fulfill his purpose in your life in some way," I tried to console her.

Later, I visited the family to share their pain and anguish as well as encourage them.

At another journey, I met a woman from New Delhi, who introduced herself as a small entrepreneur. When I looked surprised, she showed photographs of her fountains. She started making fountains at her house because the sound of flowing water calmed her during the day when her husband worked in the office and the children were in school.

As word of her work spread, orders began to come, even from hotels.

The woman's grit to give expression to her hitherto dormant talents amazed me. "A genius is 1 percent inspiration and 99 percent perspiration," I recalled the saying.

I later visited that family, as the woman had become part of my life by the end of our journey.

All this has convinced me that my travels are part of God's plan. Why do I have to take on so much stress trying to plan everything? I should leave everything in God's hands.

It is said there is joy in sharing and that the poorer one is, if willing to share, the greater one becomes. I found this true during another journey — this one on a train filled with vegetables in an interior place in Assam, northeastern India.

Among the passengers were a teenager and her mother who soon became my friends. At breakfast, the mother offered me a packet of samosa, an Indian snack. I was taken aback by this gesture, as they had to work hard daily to survive. It reminded me about the poor woman of the Gospel who gave all that she had.

Our life can also become a journey of learning, building, sharing, consoling and rejoicing, if only we keep our hearts open to the promptings of God.

Journey also is the time when we share our heart with others. We meet many people who have made good in life as they responded to God's influence. A poet in Kerala wrote this Malayalam poem long ago: "God has sent us to this earth with hands that are long enough to achieve anything in this world through our efforts."

In fact, the people I meet on my journeys constantly challenge me to dig into my gifts and talents. One of those is to listen to others.

Spirituality | Journeys of faith by train in India

The cost of being here

The cedars of Nerinx

Winter is a cloud of unknowing

To become humility itself