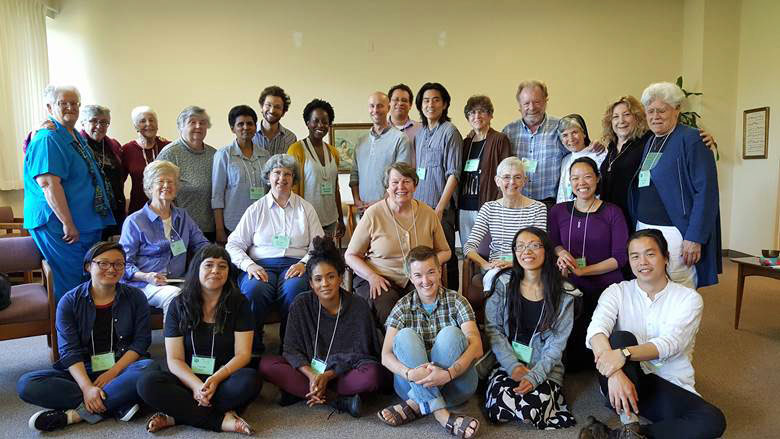 Group photo from the "Nuns and Nones" gathering May 2017 at Mercy Center in Burlingame, California (Brittany Soracco)

I couldn't resist the intriguing invitation. It lured us with the promise that participants would come "to forge authentic relationships with people they had never met, in circles they had not traveled, about whose lives they knew almost nothing at all."

In these days of recognizing diversity in our country and our world, I was fortunate to participate in an energetic conversation among women religious and millennials — a gathering whimsically billed as "Nuns and Nones" (with nones being younger persons with no stated religious affiliation). Held in May 2017 at Mercy Center in Burlingame, California, this 27-hour event was initiated and led by Wayne Muller and Adam Horowitz, both of Santa Fe, New Mexico.

When the group of 11 millennials and 12 women religious gathered on Sunday afternoon, we learned that our agenda was to "hang out and see what happens." And so we did.

To begin, each person in the circle shared his or her most pressing personal question at the time. The immediate level of mutual trust and acceptance quickly led to a strong sense of community.

"How can I hold spaces that invite differences?" "How can we move from out on the street to community?" "How much are we willing to share and to risk?" "As I move from curiosity to commitment, how do I balance work and life?" "Did I miss the path?" "How can I be my true self?" "How do I stay in the struggle?" "Do I belong in this country? Getting degrees and becoming Americans is not enough." "What can we do about polarization?" "How could I find 'them'?" "Things are taken away. People die. Where do I put my attention at any given time?"

On Sunday evening the nuns shared their sense of calling, including their current dreams and uncertainties. The nones took their turn the next morning. As we listened, we began to see commonalities. The millennials spoke of their yearning for communal living, the high value of ritual and art in creating community, their dedicated engagement in nonviolent social change, the challenges of finding where they belong, and their financial insecurity.

The women religious identified their strength in community and ritual, their ministries to people who are disadvantaged in society, their sense of marginalization in official church structures and roles, and the uncertainty resulting from their decreasing numbers of members and their increasing median age.

Both nuns and nones spoke of the suffering that results from racism, white privilege, and capitalism. Both mentioned the challenge of merging contemplation, friends, and the market.

Closing observations included the following: "We're on the same journey." "In ritual we gather the threads. We are woven together by intentionality." "We are open to one another with appreciation and joy and affection."

As a follow-up to the weekend, one of the millennials convened a video conference joined by six nuns and Wayne Muller. The millennial described the creative ways that people with similar values of community and service are finding one another — for example, Impact Hubs that offer the space, the community, and the global platform to support social innovators. Impact Hubs are located in over 94 cities, including hubs in the San Francisco Bay Area.

In a written reflection after the gathering, one of the millennials observed, "The Sisters have a commonality of language around their ethics, precepts, and values. This commonality of language is something that many of us millennials are craving. Whereas the Sisters who have shown up to the Nuns & Nones gathering already feel deeply invested and a part of this newly emerging community, I posited that for us younger folk, it will take more time, energy, and work over multiple gatherings and touchpoints to feel an active part of this Nuns & Nones community."

Several sisters also wrote their reflections. "I was struck by the commitment of the young people to making a difference in the world and to being rooted spiritually. Doing this in the context of an intentional community was appealing to some individuals who were actively pursuing this possibility."

"I was moved by the risks these millennials are taking to be authentic, creative, nonviolent, and just. They're putting their energies and careers on the line in order to live meaningful lives. And they're doing it despite the absence of societal structures that could hold that deep yearning."

"I was intrigued by the millennials' deep interest in rituals, both traditional and non-traditional. Often their politics were aligned to mine, which I found comforting."

Group members agreed on the value of continuing to be in touch. Some of the challenges are finding a time appropriate for both nuns and nones (weekdays, weekends, daytimes, evenings), the lack of a designated convener for the group, insufficient geographical proximity for in-person events, the more impersonal tone of electronic meetings, and busy schedules with multiple commitments.

It is important to note that this meeting of nuns and nones is part of a larger national effort. Similar events have been held in Cambridge, Massachusetts; Kalamazoo, Michigan; Philadelphia, Pennsylvania; and St. Louis, Missouri — with other gatherings in the planning stages.

We hope that participants will find practical ways to support one another in their shared values of community and service.

We delight in the fact that we have so much in common, as each person becomes known and appreciated.

We are mutually inspired in our close connection.

[Judy Cannon is a member of the Institute of the Sisters of Mercy of the Americas.]

Comfort and joy: Engaging Advent in the Christmas rush

Every grownup has an obligation to the children in our society