Pinocchio, who is on his way to delight my grandniece and nephew in their home in the U.S., has been guiding me in Italy. He is worried that people are forgetting what truth means.

I am here in Italy because I spoke in Rome at a conference, the "Role of Education for Global Citizenship in Promoting Social, Economic and Environmental Justice" of the World Council of Curriculum and Instruction.

I was stretched and honored to be part of a session called "The Flowering of Global Citizenship Education: Empowering and Transforming Our Common Humanity Toward a Culture of Peace" with Dr. Toh Swee-Hin, a UNESCO Prize for Peace Education laureate, and Dr. Piyush Swami, who founded the East West Educational Institute in India.

Now, in case you have forgotten, once upon a time someone left a large piece of wood before the home of the woodcarver Geppeto in a village not too far away, and he decided to carve a puppet — and called him Pinocchio.

Unfortunately, this puppet didn't really appreciate his maker Geppeto, so he ran away from home. Pinocchio started getting into trouble, but worst of all, he didn't tell the truth. When he told a lie, his nose would grow longer. Again and again he lied and his nose got even longer.

Finally after learning some hard lessons, Pinocchio decided to go back to his father. Through the magic of Geppeto's love for him, Pinocchio became good and honest; in fact, he achieved his dream of becoming a real boy, not just a puppet.

When Pinocchio heard that I was at a conference of people seeking justice and peace who kept bringing up the issue of truth, he insisted on taking me to Siena to learn more about St. Catherine.

Throughout her Dialogue she repeatedly writes that we must seek the truth about ourselves, about others, and about God. I told Pinocchio that at our conference we considered how important it is to acknowledge our economic, social and political realities — where we are in the "global village" and how that affects our sisters and brothers.

For example, are we high on the economic index? Better to ask: how are we doing on the global happiness index? People of the U.S. make about seven times as much as people next door in Mexico, but when it comes to the happiness index, they are very close: Mexico is 24th of 156, and the U.S. has dropped to 18th.

Pinocchio first led me to the Palazzo Pubblico and into the council hall of the nine leaders. I spent time just meditating before the huge murals, "The Allegory of Good Government and Bad Government." For years in the art history classes that I teach, I have pointed out these famous works of art, but somehow I had never directly connected them with Catherine.

The murals were finished nine years before Catherine was born in 1347. In them, the artist Ambrogio Lorenzetti expressed the hope of the people for the common good, showing the benefits and joy of justice and peace, in contrast to the fear, suffering and disorientation of corruption and greed. In the area of good government, a group of women are dancing — I got myself a T-shirt of these joyful dancers! I am a dancer.

Placing the mural in the main room of these executive and judicial leaders was calling them to serve with integrity, as today we hand our leaders petitions we've signed. One of the images, a woman in white holding an olive branch, personifies peace. UNESCO uses this image to represent peace, too.

Catherine probably would not have had a chance to see these murals about governing, yet she grew up in this time and atmosphere of people longing for justice and peace to prevail over greed and violence. Again and again, Catherine spoke of truth.

She longed for people to see and live in truth. The closer she came to God's loving heart, the more she felt called to speak truth boldly to both civil and church leaders, calling them to be shepherds who cared for their flocks, not rulers who made them suffer more.

Catherine wrote letters to the king of France, the Queen of Naples, to cardinals and to popes. Her love compelled her to question their duplicity. They often did not appreciate her frankness to seek first the good of the common people, not their own financial gain.

Catherine wrote the elders of Lucca, Italy, who were considering entering into war, "It doesn't seem to me that war is so lovely a thing that we should go running after it when we can prevent it" (Letter 60; 191).

Pinocchio reminded me that his village was near Lucca. He asked me if I speak the truth when my country keeps giving reasons to enter into more war. Catherine could so clearly see those who suffer from war as her brothers and sisters that she had the courage to speak loudly against it.

When she was young she wanted solitude with God, but as she grew in faith, Christ challenged her. How could she walk with the one leg of the love of God, if she did not walk with the other leg of love for the people of God?

This challenge led to care for the poor, and that led her to care for the sick, including hundreds dying of the feared bubonic plague. She began sharing God's mercy in prisons and had the courage to stand by a political prisoner who sought her comfort as he was executed.

I was privileged to pray at the site where she died in Rome, April 29, 1380. She was only 33, but she had done what she was called to do. She had spoken the truth. Will we? 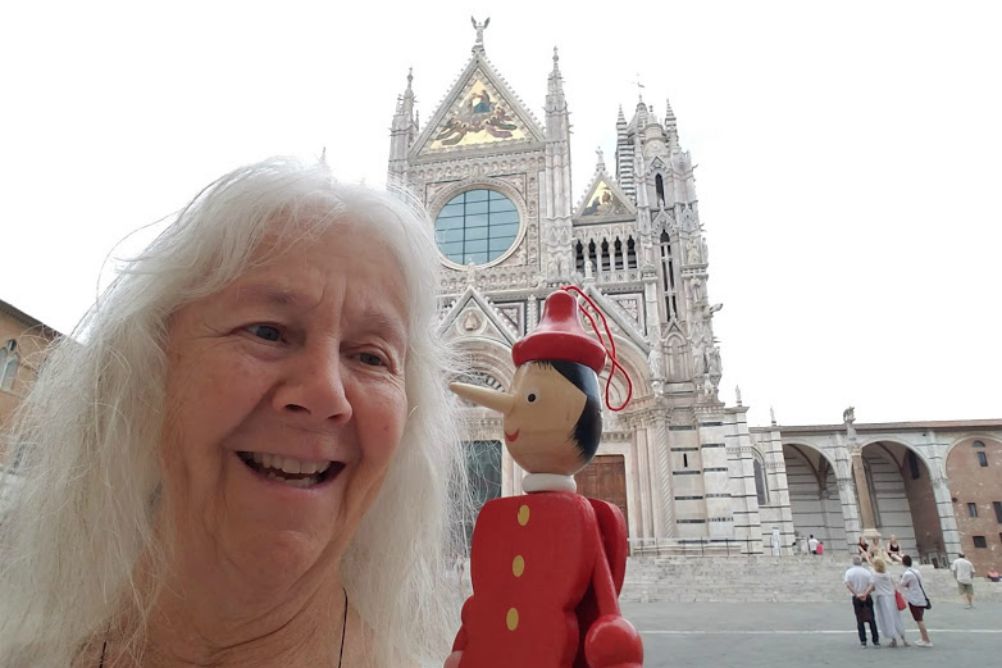 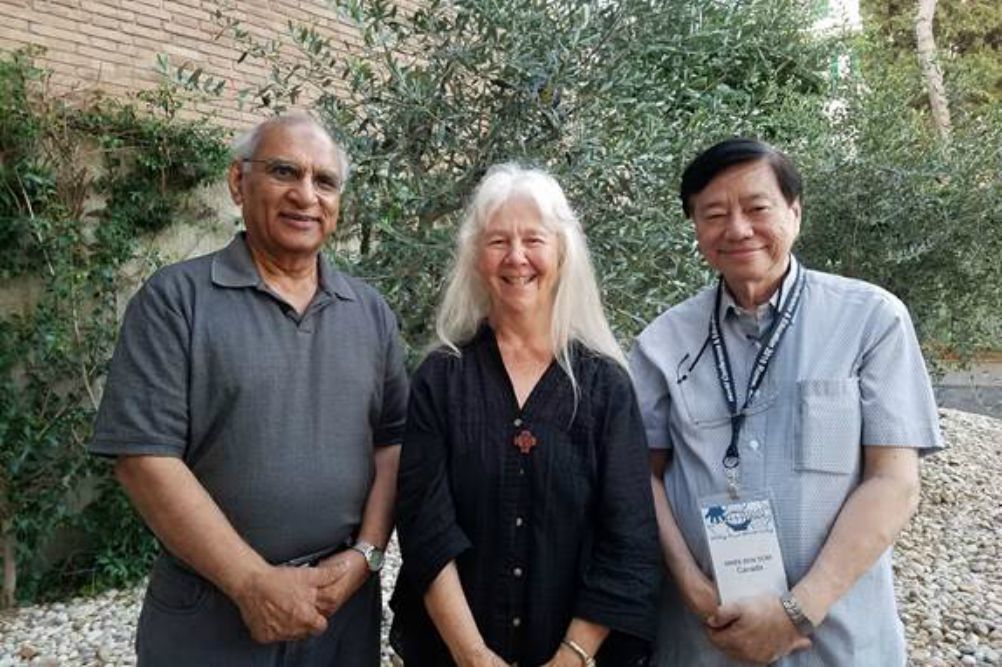 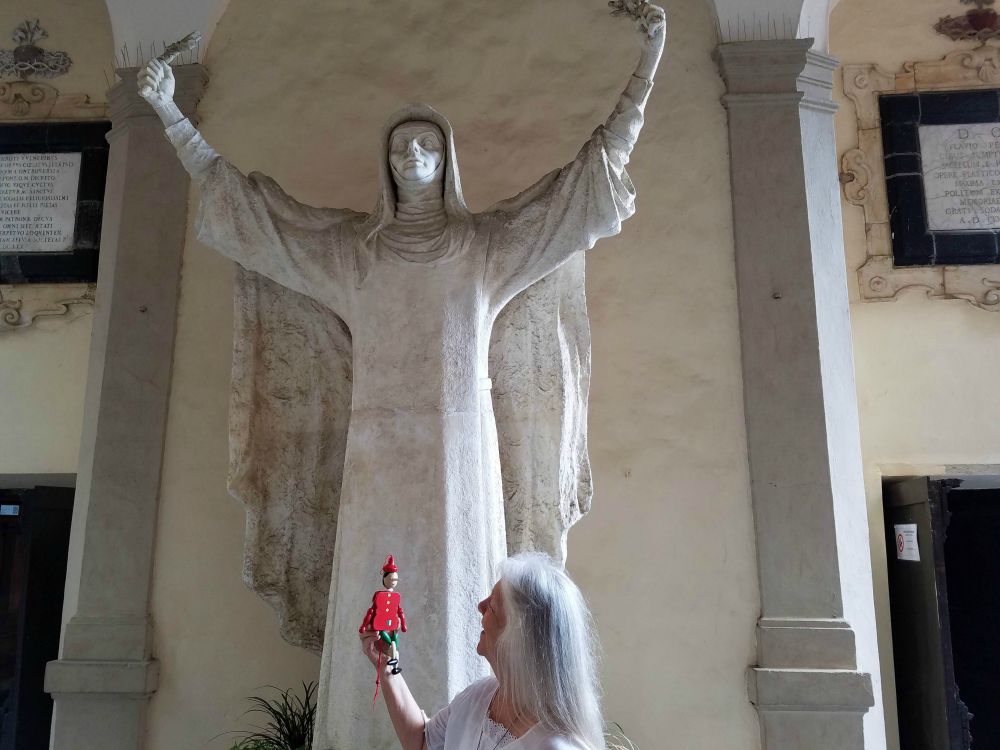