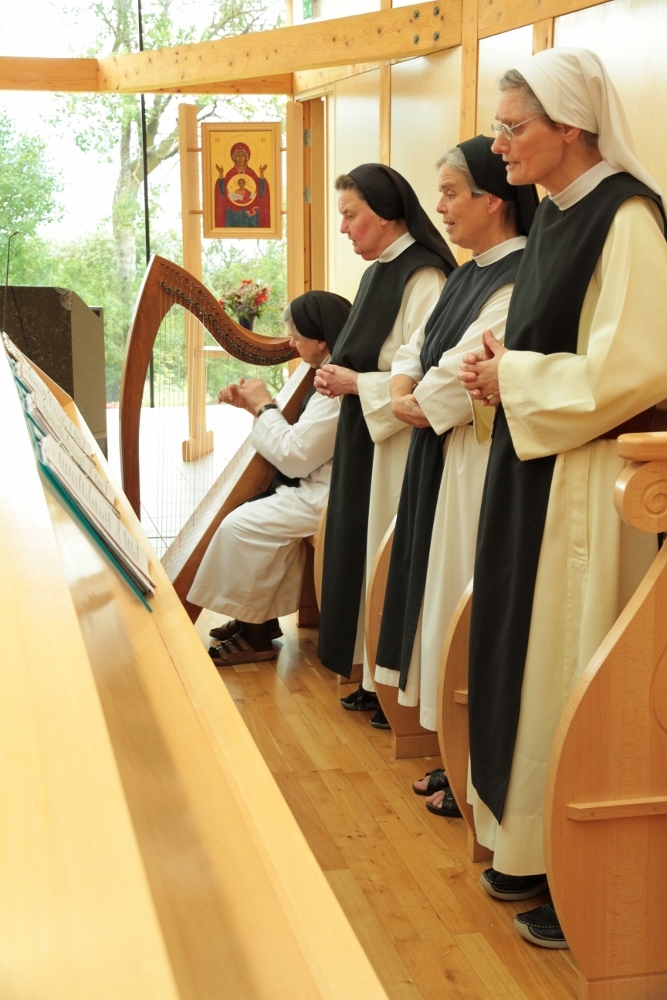 The male duck is easily recognized by its black and white plumage — like the Cistercian habit, a white robe with black scapular. The female is speckled brown. Before Vatican II, our order had lay sisters who did more manual work and spent less time in choir. Their habit was brown!

The eider duck lines its nest with its own down feathers, which are particularly soft and have been collected by humans to stuff pillows and duvets for centuries. It is quite possible that the 13th-century monks on Tautra used eider down themselves and sold it in Trondheim as one of their sources of income. There was evidence of down pillows on the Oseberg ship, the centerpiece of the Viking Ship Museum in Oslo.

During the winter, the eider ducks live on nearby "Axe Island," a place of executions in the Middle Ages. Every year in March, they return to Tautra for their courtship and mating season. The female lays four to six eggs that she incubates for four weeks, losing one-third of her body weight.

Tautra is a bird sanctuary, and an electronic gate was installed on the bridge connecting it to the mainland so that predators such as mink, fox and badger could not just trot over to Tautra for an easy breakfast of eider eggs and nesting females. 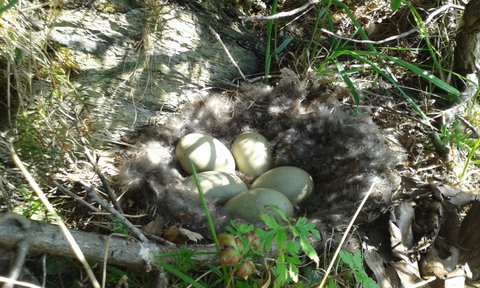 The eider duck lines its nest with its own down feathers. (Sheryl Frances Chen)

Another migrating wader (the mascot for our soap-making operation) is the "tjeld" or oyster catcher. Both males and females are dressed in a white and black habit — but unlike Cistercian nuns, they have long, bright orange beaks and legs.

The tjeld's English name "oyster catcher" is misleading since it eats many other marine organisms, but it is one of the few birds that can actually open an oyster with its strong orange beak.

For the winter, the Norwegian tjelds may fly as far south as North Africa then return to Tautra every year on March 5 to begin courtship dances. We have several pairs that nest on our shore, near Father Anthony's lettuce garden. They make a circle of stones in the sand and lay two to four mottled, perfectly camouflaged eggs.

The chicks are also speckled just like the small pebbles on the shore; but the parents go crazy whenever a sea eagle flies over or even when clumsy humans walk by on their way to swim in the fjord. Only determined swimmers think it is worth the risk of being dive-bombed.

It is a thrill to be the first to sight an oyster catcher that has returned to Tautra after the long, dark winter. If that's a tjeld, then today is March 5, and spring is coming! 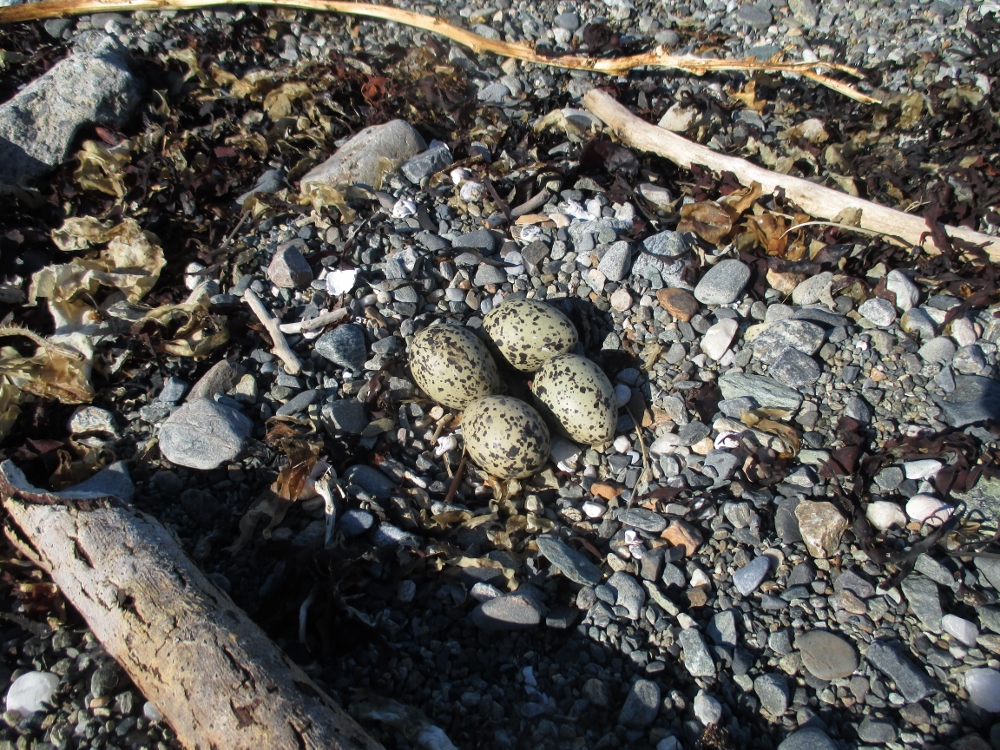 Tjeld nests are made right in the rocks. (Sheryl Frances Chen)

The "vipe" (plover or lapwing) is another bird that migrates back to Tautra in early spring. It is a very small member of the stork family that can be mistaken for a quail because of a tuft of feathers that sticks up at the back of its head.

The vipe most often nests on the northern coast near agricultural land. That's Tautra! We frequently see them bobbing up and down in the farmer's fields across the road, finding straw and short grass for their nests. In March the male flies a very acrobatic dance as part of the mating ritual — another sure sign of spring!

Like these migrating birds that come from all over the world, the 14 nuns of Tautra Mariakloster come from eight different countries: the United States, Canada, England, France, Netherlands, Belgium, Poland and Vietnam. In addition to trying to create unity in the community when we come from such different cultures and backgrounds, our greatest challenge is communication.

Each sister must learn Norwegian, and some also need to become more proficient in English. Our liturgy is in Norwegian, but our common language in community is English. Learning another language is not just a matter of memorizing grammar and vocabulary but involves entering into a different way of thinking: syntax flows out of the thought process of a people.

With eight different mother tongues, an everyday experience is that a sister's word may carry different nuances. There is always the danger of faux amis, false cognates when two words sound alike in two different languages but actually have totally different meanings. This sometimes leads to hilarious — or sometimes hurtful — misunderstandings.

One of my jobs in the monastery is chantress and choir director. Every Saturday morning, we practice our singing for the next week's liturgy, and once or twice a month, a Norwegian woman comes in to help us with our Norwegian pronunciation.

Saint Benedict says we are to sing the psalms in such a way "that our minds are in harmony with our voices." 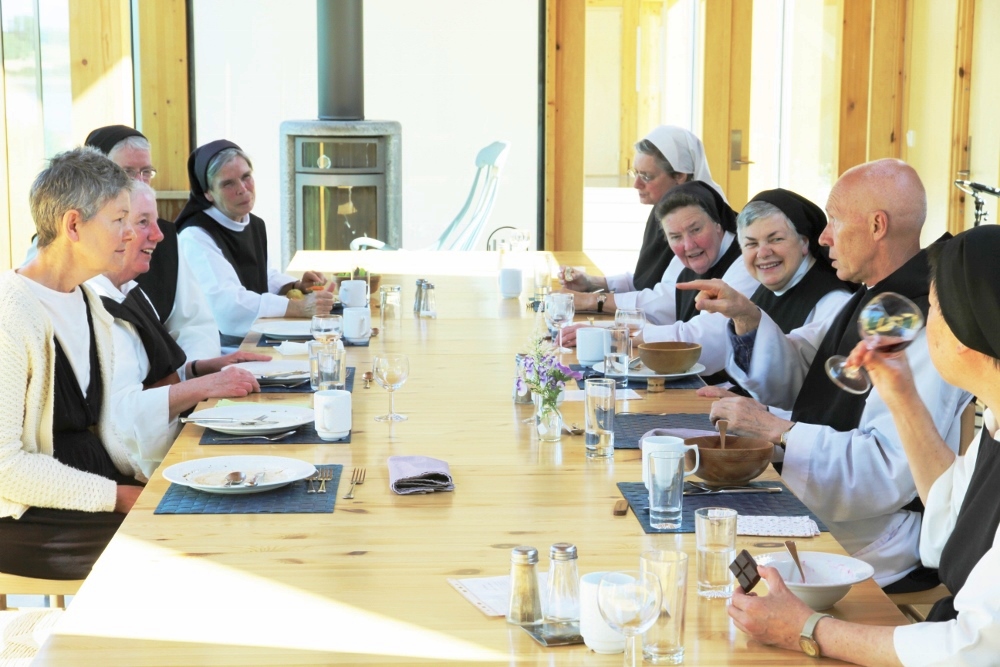 The Cistercian sisters at lunch on the Feast of the Assumption with Cistercian Br. Dom David Lavich* (Provided photo)

I used to think that singing harmoniously meant that we would sing in unison, all singing the same melody at the same tempo. To harmonize really means to add other voices to the melody, to make the music more different instead of more the same. Our community on Tautra is the perfect opportunity to create a magnificent piece of music, with 14 different voices complementing and enriching the baseline of Cistercian life.

Since our monastery was refounded, our membership has doubled, and we have three more women coming in the next few months for observership (pre-postulancy). If they decide to enter, our cells will be full. At the same time, our older sisters need a senior wing that is hospital-standard because we do everything we can to keep our sisters here at the monastery, caring for them ourselves until death.

This is part of our vow of stability: We commit ourselves to living with this community, in this place, until we die. It is a large part of the reason I became a Norwegian citizen: I expect to live and die and be buried on Tautra, in our own cemetery behind the altar with an eternal view of the fjord.

We have begun working with an architect to build a new wing. Since it would take more bars of soap than we can produce, we have started a capital campaign. We have about 25 percent of our 2.5 million euros goal.

Please join us in prayer for the completion of this project, and know that you are welcome to spend some days in retreat at our guesthouse. As one of our neighbors said, "Tautra is a refuge for migrating birds and Cistercian nuns."

[Sheryl Frances Chen was assistant editor of U.S. Catholic magazine before she entered the monastery to join the Order of Cistercians of the Strict Observance (OCSO). Now she is chantress and Saturday cook at Tautra Mariakloster on an island in the Trondheim fjord.]

This Advent, may we make room

A fish tale: What I learned from the salmon

Can stress be a channel of God's grace?