Sisters to parliament against trafficking

• Q & A with Sr. Noelene Simmons, battling trafficking in Australia, a 'destination country' 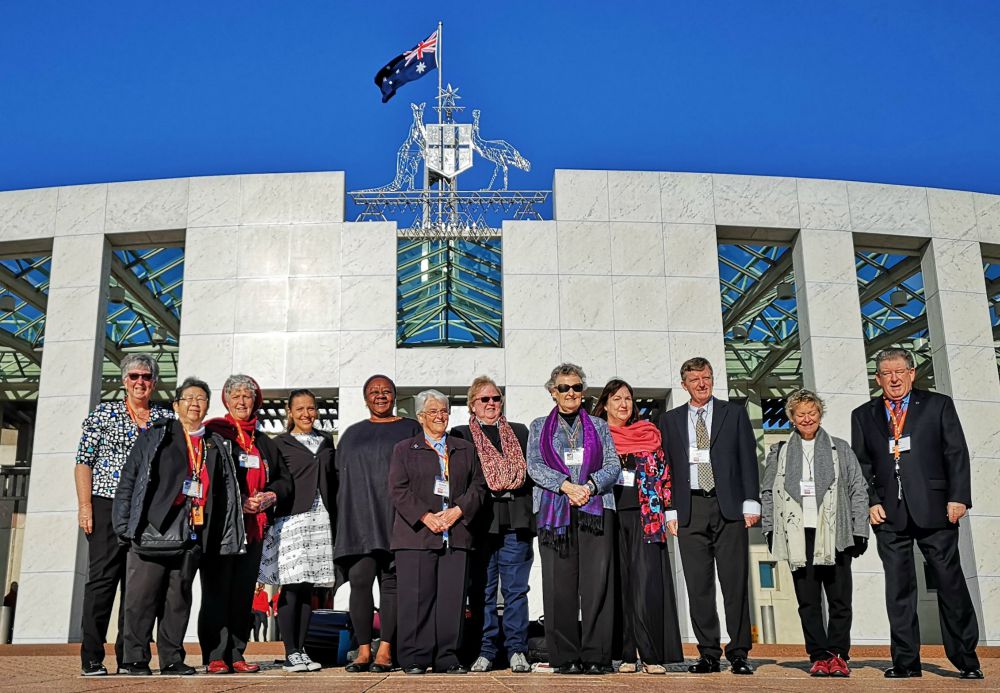 An invitation to join the ACRATH (Australian Catholic Religious Against the Trafficking of Humans) group visiting Parliament to advocate and to lobby members of Parliament on issues of human trafficking and slavery is always a delight and a challenge for me.

ACRATH has been coming annually to the Federal Parliament in Canberra, Australia, for 13 years, and some of our members come more often than that if they hold a seat on groups that work against trafficking.

In mid-August 2018, I was able to join this annual group event for the second time in three years. Thirteen members of ACRATH travelled from across Australia: Perth, Melbourne, Brisbane and Sydney. We represented a number of religious congregations (Marist Sisters, Sisters of Charity, Sisters of St Joseph, Religious of the Sacred Heart, Missionaries of the Sacred Heart and Christian Brothers) including nine women, two men and also three lay women.

This year we were joined by two Australian South Sea Islanders who advocate for people who are brought in on special visas to work in agriculture — in this case often from Vanuatu but also other Pacific Island countries; often they are found to be not supported as the law of those visas demands. They have areas in common with the work we do.

Most of us stayed in The Gathering Place, a Brigidine center in Canberra. August was very cold in Canberra, especially this year, but the Parliament House itself was kept warm enough to feel quite steamy to us on occasions!

Our process is simple and effective, starting with a briefing meeting on the Sunday afternoon prior to our visits to members of parliament. We pray together and spend an intense afternoon clarifying and becoming confident about our particular issue for advocacy that year.

Australia has a Modern Slavery Bill which was working its way through the various parts of parliament when we were there — the Senate Legal and Constitutional Affairs Committee was conducting a public inquiry about it. (The bill was in fact passed, so now the reality will start to work.)

We were very pleased to see included in this bill an annual reporting requirement on the risks of modern slavery in large company supply chains, and actions being taken to address those risks. However, we were lobbying to recommend further inclusions in the act, such as the appointment of an Independent Anti-Slavery Commissioner with oversight over the implementation of the act. We urged that this commissioner or statutory officer be the champion of the issue and an adviser to business; we also suggested that the compliance role resides in the Home Affairs Department.

We have been advocating with parliamentarians for some time for the establishment of a National Compensation Scheme for victims of trafficking. Presently there are only state-based schemes for victims of crime, that are inconsistent and can prove cumbersome or ineffective to enable compensation for the full harm experienced by a victim of trafficking — especially if s/he has crossed state borders during their time in Australia.

Recognition that trafficking itself is a crime can be lost when compensation can be gained generally only by those trafficked into the sex industry. Stories of people being brought in to work in the sex industry are quite well known, but usually hidden and hard to find. Australians so often find it hard to believe that we have modern slaves in domestic service, in agriculture and in the building industry.

It makes me very angry that we even need to raise the issue of the licensing of "hire firms." A number of these use exploitative and unjust and illegal practices in the area of seasonal workers and trafficked people: the workers are often coerced, are not given information about their rights, are given unsatisfactory housing and are underpaid or can even be offered less work than promised. Licensing these firms, we hope, would make such exploitation more difficult. At present it is possible for the firm to "phoenix" — to disappear and dissolve their company and then have those same directors appear under another company/firm name to avoid any consequences.

Forced marriage also has been on our agenda for some years now, since we received some funding to prepare a secondary school educational resource. Work in this area by ACRATH and others has increased the number of cases referred to the Australian federal police. We are asking for the establishment of a national approach to awareness-raising education among educators and high school age students.

One of the most satisfying parts of working with ACRATH against human trafficking in all its manifestations is that the work is inter-agency. Its strength comes from each group using its expertise and sharing openly. Another is the care with which we carry out our week of advocacy in federal parliament.

Over the years, this advocacy has been perfected into our group agreeing on a particular issue which outlines the present needs as we see them of our work against human trafficking here in Australia. It is this statement of issues that we take to each politician who consents to our visit.

We present the purpose of our visit and what we believe is needed to bring this crime against humanity to the awareness of our politicians hoping for action. We prepare by asking all parliamentarians if they would like us to visit, carefully plan our program so that we go in twos and threes to visit them and stick carefully to the time allotted by them, and approach them respectfully and with friendship. We approach all members and senators and accept invitations from people of any party represented here without bias.

Unfortunately, our work is made more difficult this year because of the lack of funding from the Home Affairs Department. Although we have received funding over a number of years, this year our request was denied. To our issues we added a request for a 3- to 5-year year funding scheme from the Home Affairs departmental budget under the national Plan to Combat Human Trafficking and Slavery to include all the non-governmental organizations that work collaboratively rather than set these agencies up in competition with each other for the funding they need.

This would enable funded NGOs, who already work in a collaborative way, to undertake their various approaches to this work in a systematic and productive way.

I find it a deeply satisfying experience to be so readily received by members of parliament of all parties and to be able to present our issues. It is hardly likely in Australia that anyone would not accept that we do not want human trafficking or slavery, but the readiness to open their eyes and realize that it does happen here is very welcome. We hope that the Modern Slavery Bill will be effective and given the resources it needs.

One afternoon I was listening into parliament on the radio and heard ACRATH quoted by name as a backup to the member's request of the independent commissioner. He even named the actual trio of us who visited him this year! How affirming is that?

[Diana Hayes is a Religious of the Sacred Heart in the Australia-New Zealand Province. As a social worker, she served in a hospital with children and adults with cerebral palsy and in community aged care before taking up roles more internal to her congregation and working in vocation ministry. Hayes attended St. Beunos in North Wales in 2014 to do a course in retreat giving and spiritual direction and is a member of the leadership team of her province.]

Trafficking | Sisters to parliament against trafficking

Warning girls about the tactics of human traffickers

Breaking the silence of human trafficking: Catholic sisters in Zambia speak out