I have just finished reading the third volume of Sandra Schneiders’s thought-provoking theology of religious life as it is being lived in today’s post-modern, first-world society, Buying the Field: Catholic Religious Life in Mission to the World. The image of religious life Schneiders poses is based on Matthew’s scriptural text: “Religious life is like a treasure which a person found hidden in a field and out of joy sold all she had to buy that field” (Mt 13:44). I would love to say that’s exactly the way I understand it, but I sense in myself a cognitive dissonance between Scripture’s idealism and my lived reality.

We live a world that is widely divergent from the first-century world. It occurred to me to ask myself, “What image describes the core, the essence, the essential elements of the lived reality that is called ‘religious life’ from my own lived experience?” “What image do I carry around in my head, heart and gut?”

I would love to live
Like a river flows
Carried by the surprise
Of its own unfolding.

The river does river work – it flows without trying to figure out the whys of what it was created to be. If the river could speak, would tell humans to be the same, flow. One of the aspects of religious life I hadn’t thought about upon entering the lifestyle is that surprise is an integral part of the experience. I am surprised I have lived to see Vatican II’s acknowledgment that we live in an evolutionary world. I am surprised by the unfolding of science, technology, theology and philosophy, and I wonder what surprises are around the bend as thinkers and researchers explore the known and unknown landscapes of our cosmos.

In her 2013 book Ilia Delio says: “Nature is an interlocking network of systems, an unbearable wholeness of beings . . . it is more flow than fixed. The body is a formed stream. Structures once formed as stable do not necessarily stay that way.” Is religious life more a flow than a fixed and stable entity? Is this what the river image has to say as I wonder about my life in the context of the unfinished universe we live in?

I suspect the river image resonates with me, too, because so many women religious traveled American rivers such as the Mississippi in the 1800s, establishing schools, hospitals, orphanages and social services for hundreds of thousands of people. Today women religious may not be going in paddle-boats, but they travel the world seeking to care for those who hunger and thirst for God. Today they can be found in remote villages and large metropolitan areas everywhere – they still travel to meet the people of God where they live.

"You are the light of the world. A city set on a hill cannot be hidden . . . .” (Mt 5:14). This Scripture text came to my mind when I saw a beautiful group of buildings high on a hill overlooking Lusaka, Zambia, a city struggling to build its public infrastructure. The American Embassy sits high up on a hill overlooking the city where another Franciscan sister and I have flown into over the years to minister to women religious working among the city and country’s people of God. It is truly a shining city.

I wonder, is this how an “outsider” sees the institutions that were built by thousands and thousands of women religious over the last couple of centuries in the United States? I have observed how women religious in the Midwest have built beautiful cities on hills –  motherhouses that often are beyond the imagination of most people’s dwelling places. When I tour one of these beautiful places, I am in awe of what a few women have created –  sanctuaries that are truly works of art akin to Paris’s Notre Dame Cathedral. They are places of light and enlightenment for the world’s impoverished peoples and for many women seeking to dedicate their lives to loving God and their neighbor.

There must be something in the DNA of women religious that compels them to build. In Zambia, women religious are building their cities on hills, in the wilds of the bush and in inhospitable places that are beyond first-world dwellers’ imaginations. As they struggle to meet their own needs and the basic food and water necessities of the people they serve, they build education and health infrastructures, and they also build gathering places, holy places on hills. Although in Zambia, their cities – no matter how modest they may be – are surrounded by a 12-foot stone fence, barbed wire, guard dogs and sentries. Their cities are lights of hope to many as they go about building schools and clinics to serve God’s people.

I like this image especially now that I am in my waning years on Earth. I can be like yeast as I walk among God’s people in my small-town surroundings and feel the aging process in my body. I have some first-hand knowledge of what yeast does when it is added to the right measurements of flour and water. I don’t pretend to comprehend its chemical workings, but I know it works because I have experienced it. Is the Spirit calling women religious to use their talents, gifts and wisdom accumulated from years of living to be a new kind of yeast-like presence?

I think of myself as yeast as I companion Zambian women religious. I am there to lift them up just as yeast lifts up the dough of bread. I give them the gift of my presence. There isn’t much I can do about their dire circumstances and the overwhelming challenges facing them. But I can listen to their stories and raise them up to see that they are wonderful, beautiful, beloved women of God.

Our small contribution to the missionaries of Zambia is our loving, healing and compassionate presence among them. And it is through this gift of our encouraging presence that they are renewed and strengthened to carry on the ministries that are theirs to do. As evolutionary authors point out, life evolves toward greater unity. By our presence in the growing edges of the church, we help shape a global unity, an inclusivity of wholeness that reflects the life of Jesus who reached out to those on the margins and brought them into community.

Religious life is like the World Wide Web – it blankets the earth. This is an image that today’s women religious need to “try on” because the breaking-edge technological world is changing everything about what we know, how we know and whom we know. I am convinced that Teilhard de Chardin had it right: “. . . Both science and biblical faith open up our understanding of the universe to new possibilities and hence a worldview in which love and hope have positively creative significance” (Teilhard to Omega, 2014, edited by Delio). But to enter into this understanding, we need mystical eyes to see and ears to hear, or, as Rahner says, it is imperative that every Christian be a mystic.

I would like to think that I am dipping my toes into the global community through the means that are available to me –  the Internet and the miracles of today’s social media. This means hearing the cry of the poor not only in my small town but from wherever their voices are emanating, as Pope Francis admonishes us to do.

As I communicate and collaborate with friends on the other side of the world who wonder why they were born into their circumstances of dire poverty, I can hear their story and support them by my retelling of their story to those who have been blessed with the abundance of the first-world economy. I am deeply touched when people in my parish take to heart the stories I relay to them about my Zambian encounters and they do what they can do to share their gifts and talents to address the needs of people they have never met.

I am totally surprised (my river image) by the number of persons who financially responded when my companion and I wrote a begging letter and emailed it from Zambia to our friends in America on behalf of the Daughters of the Redeemer, a small indigenous group of women religious in Lusaka.

With the World Wide Web at our fingertips, we are being called in a new way that our foremothers never imagined. We are able to create sisterhood circles with women religious from every corner of the world. Women religious can be united in being women of compassion who hear the cries of the poor as we collaborate in building the Reign of God throughout the world. Is your image of religious life large enough to embrace the whole world?

[Connie Fahey, FSM, is a member of the Franciscan Sisters of Mary from St. Louis, Mo., and has ministered in a variety of health care ministries, worked in hospitals, the SSM Health Care System and established a hospice home care program and school of medical technology in South Carolina. She has served on her congregation’s leadership team and currently is a spiritual director in Janesville, Wisconsin and in Zambia, Africa.] 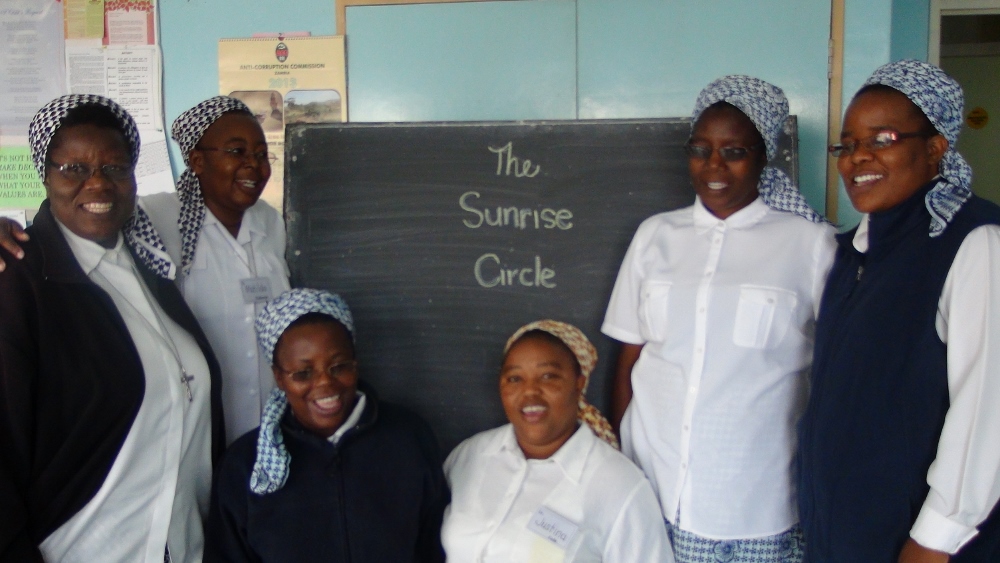 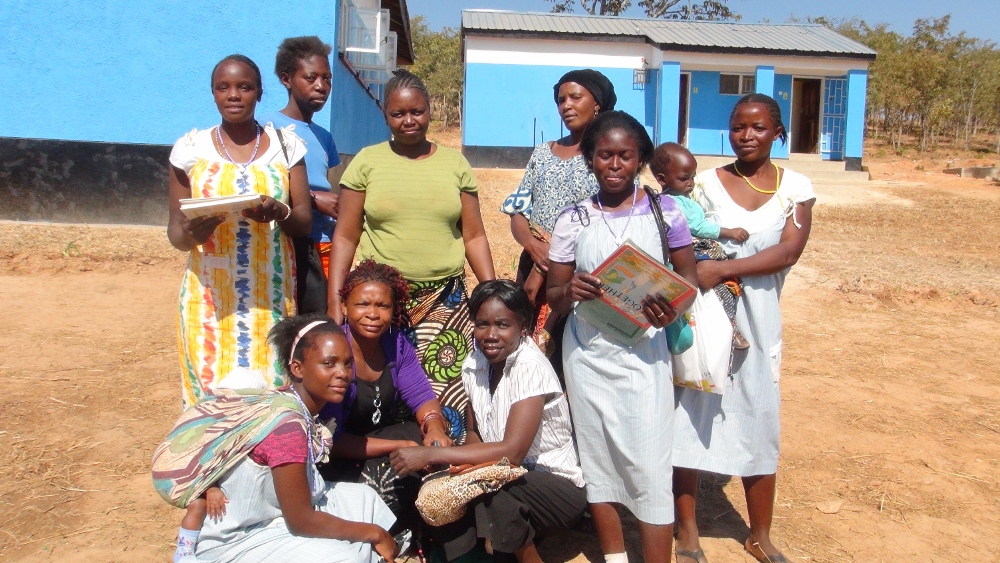