The ending should have been the beginning

by Joan Chittister
This article appears in the Apostolic Visitation feature series. View the full series. 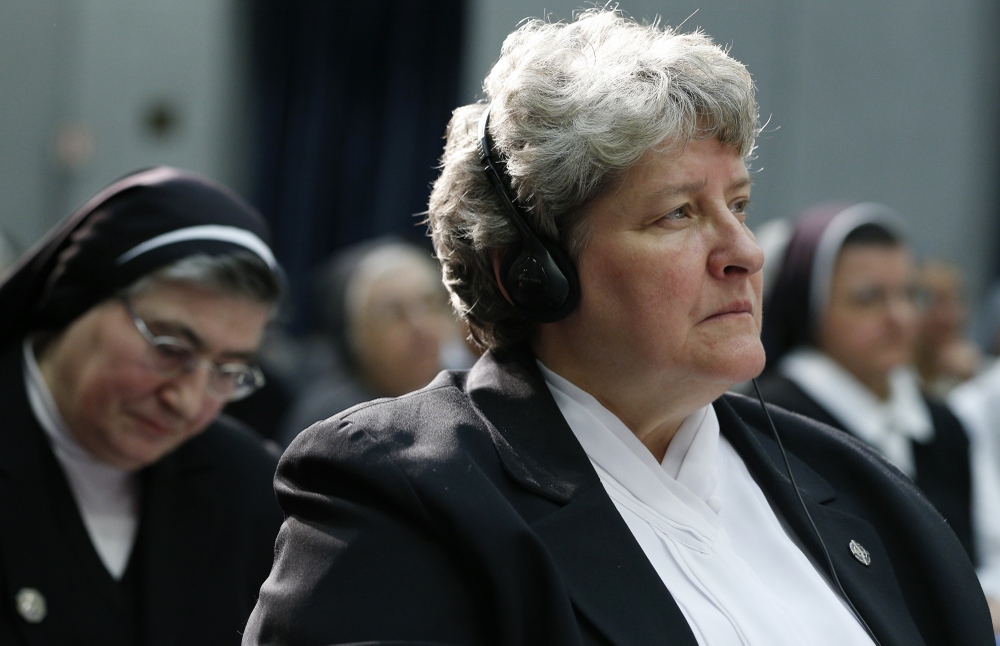 Nuns listen during a Dec. 16 Vatican press conference for release of the final report of a Vatican-ordered investigation of U.S. communities of women religious. The 5,000 word report summarizes problems and challenges the women see in their communities and thanks them for their service. The visitation was carried out between 2009 and 2012. (CNS photo/Paul Haring)

I learned somewhere that “All spirit starts at the top.” The attribution may be apocryphal, perhaps, but in this case true, nevertheless.

Tuesday, in fact, I saw the truth of that with my own eyes.

Tuesday’s release of the final report on the apostolic visitation of American nuns launched in 2008 by Cardinal Franc Rodé, then prefect of the congregation for religious life, takes on a completely different tone than at its inception.

The plan, as then defined, simply mandated the invasion of American religious congregations to look into the quality of life being lived by American sisters. Launched without discussion or collaboration with the women religious involved, the plan took on the aura of a witch hunt and marked the entire process negatively.

The process alone alerted sisters to the lack of trust and respect for them, even as institutions let alone individuals. It also alerted the laity, thousands upon thousands of them, whose own spiritual lives had been nourished by the changes sisters had made in their work and lifestyles over the years. It was the laity who knew up close and in a special way the potential disaster that could come to the church itself from blocking those changes in the future.

Like the drop of a medieval guillotine ordered from above and subject to no review, the harsh imposition of the process was met by appropriate resistance from one end of the country to the other. Women religious gathered in solemn conclave reiterated that the changes in religious life since Vatican II came directly out of their attempts to make ministry and evangelization to a Vatican II world possible. And, yet, they also knew it was for those very developments that they saw themselves being tried and convicted of religious malfeasance.

Nevertheless, today, six years later, under Cardinal João Bráz de Aviz, this final report issued in response to that national evaluation has all but leached out the negative and punitive spirit that unloosed it. The spirit at the top has changed. The tone has changed. The degree of collaboration has changed.

As a result, this final report becomes a standard for future dialogue, yes, but at the same time, its lack of transparency galls a bit. Here the visitation is explained as meant to convey the caring support of the church in respectful ‘sister-sister-dialogue’ – akin to Mary’s visit to Elizabeth. The explanation by today’s writers that the review came merely out of interest and support actually weakens the present document by denying women religious the apology they deserve.

In fact, Tuesday’s report, with its recognition of the momentous effect of the American sisterhood on the development of the church in the United States, is precisely the document that should have opened the discussion rather than ended it.

The first is the ongoing role of women in the church. If women religious are so respected by the church, it would seem that the church should be involving them in the decision-making that affects their lives.

The second is the very real possibility, if the press conference on the release of this final report is to be taken seriously, that this very model of Roman evaluation of particular congregations undertaken by the Congregation independently of the congregations involved, might easily become the norm.

Before such a step is taken, surely it should be looked at long and hard by all the parties involved. Are religious congregations of women to be treated willy-nilly at the whim of a single office in a building thousands of miles away?

From where I stand, the air has cleared, the way has opened, the conclusions are well stated. We are all, women religious and the church itself, teetering inside a tilting world. The mantra for now must be, “These are our sisters in whom we are well-pleased. May their efforts raise us all up to serve a new world with new and holy hearts.”

[Benedictine Sr. Joan Chittister, a frequent NCR contributor, writes the online column From Where I Stand.]

National Catholic Reporter's website is hosting a comments page for your discussion about the apostolic visitation report and what it means for the church and future of women religious.

Keep up with all of GSR's coverage of this issue on this series page, which lists all the related stories together.

The ending should have been the beginning