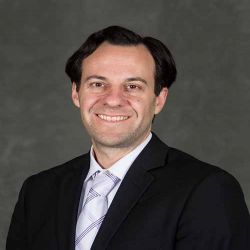 The Franciscan Peace Center is proud to host an online conversation with nonviolence advocate, author, and educator, Eli McCarthy, Ph.D. on Friday, April 9 at 1:00 PM CST

McCarthy is a co-founder of the DC Peace Team -  an organization that works to prevent conflicts from turning violent primarily through the use of unarmed civilian protection.  For over a decade, he has led numerous training sessions empowering volunteers to recognize and intervene in situations at risk of erupting in violence.

McCarthy is also a professor at Georgetown University where he teaches justice and peace studies.  His most recent book is called "A Just Peace Ethic Primer: Building Sustainable Peace and Breaking Cycles of Violence" (2020).  He has also authored numerous journal articles such as "Truth and Reconciliation Commissions: Toward a More Just U.S. Society," and "Will You Really Protect Us Without a Gun?: Unarmed Civilian Peacekeeping in the U.S."

Previously, as Director of Justice and Peace for the U.S. Conference of Major Superiors of Men (2012-2020), McCarthy was engaged in strategic advocacy on federal policy. He has been influenced by multiple trips to Haiti working with people living in poverty as well as working with people experiencing homelessness in Boston and DC, and in monitoring the Palestinian Elections in 2006 with the Nonviolent Peaceforce.

McCarthy has also been actively involved in the Catholic Nonviolence Initiative, a global appeal to the Catholic Church to re-commit to the centrality of Gospel nonviolence.

Advance registration is required at https://us02web.zoom.us/meeting/register/tZIsfuioqDssE9aWpErTw35FReX5I8scDaO9