Demanding a Pathway to Citizenship 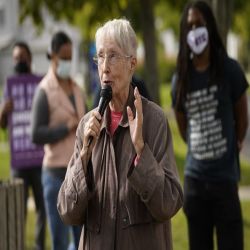 There was an Immigration March and Rally on Saturday, October 16, 2021, in Riverhead urging Senate Majority Leader Chuck Schumer and Congress to pass legislation creating a pathway to citizenship for immigrants in the US.

The group of more than 200 people - including many from Spanish-speaking countries but also from South Korea and American supporters -marched from the North Fork Spanish Apostolate offices to the Peconic Riverfront.

Our own Amityville Dominican Sister Margaret Smyth - founder of the Northfork Spanish Apostolate - addressed the crowds, as well as State Assemblyman Fred W. Thiele and immigrants who shared their stories.

There are many people who came to this country in times of natural disasters and given Temporary Protective Statues (TPS). Others were brought here as children and were protected under Deferred Action for Childhood Arrivals (DACA) . Unfortunately, these protections of TPS and DACA often have been threatened as political winds shift in this country leaving immigrants vulnerable. Now, these dreamers, TPS recipients and allies are demanding permanent protections: a pathway to citizenship! Organizers of the rally explained that the deadline to include this reform in an upcoming bill is looming: a few weeks away.

"It could mean deportation for both parties" if these program are lost, explained S. Margaret Smyth. "Many of the people in the DACA program came as children and have never been back to that country. They have no connection to it. Some people didn’t even know that they weren’t born in America.... Many have become doctors, nurses, lawyers!"

"People’s lives are on the line," stated S. Margaret. "These are people who are essential to us, have been here for years, started businesses, families, and have become part of the community. It is time to give them the benefits of being here fully.”

How can you help? Call Senate Majority Leader Chuck Schumer's office and your local representatives to demand a path for citizenship for the Dreamers and those with TPS! Photo by Greg Shemitz