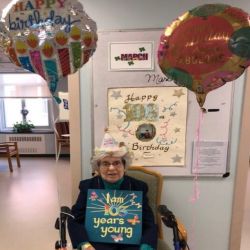 Sister Margaret Bauer celebrated turning 103 years young on March 15. She is currently the oldest Sister in the province.

"The birthday party for Sister Margaret was absolutely wonderful," said Sister Rose Federici, part of the leadership team at Stella Maris in Timonium, MD, where Sister Margaret currently lives. "We began with a birthday prayer read by one of our GNAs. We had the party in our dining room. After lunch, we sang Happy Birthday to her and enjoyed an ice cream cake that was donated. Sister Margaret also requested cupcakes."

Birthday greetings came from all over, including one from General Superior Sister Roxanne Schares in Rome. The Generalate community also sent her a greeting. Sister had a banner to wear that said "I am 103 years young." There were also birthday posters and flowers from the Provincial Council, and Provincial Leader Sister Charmaine Krohe stopped by to offer her best wishes.

"Many Sisters attended the party, and the Rosary Community connected electronically so they could give Sister their blessings," Sister Rose shared. "She also received many greetings from her friends in Frederick, MD. Sister Margaret was absolutely radiant during the celebration of her 103 years. Her community members really enjoyed themselves, too. The Sisters at Stella Maris truly love and support each other."