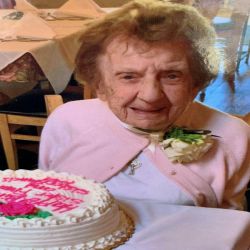 S. Francis Piscatella is turning 108 on Tuesday, April 20, 2021.  When Sister of St. Dominic of Amityville Francis Piscatella entered the order in 1931, it was a different time!  Due to a perceived disability- as a child her arm had been amputated -she was declined admittance by four Religious communtities.  When she was accepted by the Sisters of St. Dominic of Amityville, she proved there was nothing she couldn't do!

S. Francis taught in many local elementary schools as well as serving 17 years in Dominican Commercial High School and 52 years in Molloy College.

“She is one of the greatest teachers that the Dominican Order has ever had,” said Sister of St. Dominic of Amityville Francis Daniel Kammer, who was her student, was sponsored by her when joining the congregation and currently lives with her. Taking a math class with S. Francis, was like “opening your head and pouring the knowledge in,” she said. S. Kammer went on to say that S. Francis was not only a respected teacher at Dominican Commercial High School, but also had a great reputation at surrounding schools. Students who failed during the year were sent by their own school administration to DC for the summer, specifically seeking out Sister Francis with the assurance that -- with her -- they could learn math and pass.

She is beloved by so many people including her family, students and Sisters.  "She became the most wonderful role model for all of us, young sisters and older sisters too, because she is so loving and so determined,” said Sister of St. Dominic Jeanne Andre Brendel.

Lena and Debbie in Communications