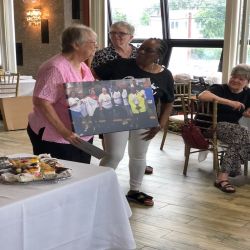 After 20 years of ministry at Siena House, Sr. Cely Byrnes, OP, a Sister of Saint Dominic of Blauvelt, New York, retired as Director of Operations.

Sr. Cely shared, “I’ve been planning retirement for three years, and finally, three months ago, I decided that this was the moment (to retire) and time to move on.”

Siena House, which Sr. Cely refers to as a “very dynamic place,” is a ministry site that she trusts “will be around for the future.”

It’s bittersweet, though, for Sr. Cely, as when she first began her ministry at Siena House, she believed that “the problem of homelessness would not be lasting this long, and now, there is no end in sight. The needs of the homeless are never-ending. When someone moves out, it’s often a day before a new individual moves in.”

She went on to add, “Something that gives me hope is that there is a greater awareness of the need and support for structural economic change in order for homelessness to be ended."

“The demands of the department of homeless services and the other governmental programs made it too difficult to have both roles. After (we split the role into two), I became the Director of Operations and became more focused on the support services to this program.”

When further reflecting on her ministry and asked what she would miss most, Sr. Cely shared, “We have a wonderful staff. I’ll miss that sense of community and family that we have at Siena House.”

Sr. Cely added, “In my twenty-plus years at Siena House, we have seen so many of our young mothers move out into permanent housing. Although not all of them return to visit, many of them do, and they update us on how are they are doing. From getting married to graduating from school to even starting their own businesses, they come back to see the people at Siena House. To help people change their lives so greatly and stabilize themselves makes it all worth it.”