Sr. Liz Engel to Retire from Downey Side 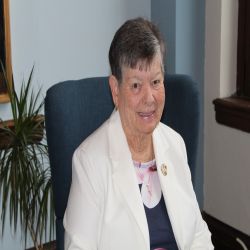 Many of the Sisters of Saint Dominic of Blauvelt, New York, have spent their lives and ministries dedicated to the congregation’s mission of caring for those in need.

Sr. Liz Engel, OP, has lived faithfully to that mission as Executive Director at Downey Side Adoption Services for the past 30 years.

Downey Side, a non-profit, non-sectarian, private adoption agency, was first founded in 1967 by Sr. Liz’s brother, Fr. Paul Engel, a Capuchin priest in Springfield, Massachusetts. Since its founding, the agency has placed over 8000 children with families in its 54 years of existence. Sr. Liz would play an instrumental role in the agency’s success, working in offices in the New York/New Jersey area and eventually becoming Executive Director in 2017 when Fr. Paul became ill.

On the December 9th Hearts Afire Podcast episode, Sr. Liz reflected on her time at Downey Side and her decision to retire as Executive Director in January 2022.

Sr. Liz shared, “Going back to my brother’s initial commitment to children who were without homes and/or parents, I felt it very much in connection with my early work at Saint Dominic’s Home where I ministered as a cottage and group home mother. In fact, my original intention to enter the Sisters of Saint Dominic was because of their dedication to care for homeless and neglected children of New York and other areas that we were in.”

Since Sr. Liz began her ministry at Downey Side, over 30 years ago, she has personally placed over 200 children with parents in New York and New Jersey.

“The main work of our ministry is to eradicate foster care because the foster care system, anywhere, is very needy, in the sense that children are not really being served.”

During the episode, Sr. Liz shared two personal stories regarding children who were negatively affected by foster care and how it led to the beginning of Downey Side.

Thirty years later, Sr. Liz still has that same passion as when she first started, and even though she will no longer be ministering as Executive Director, she will remain involved at Downey Side as a Board of Director, as well as a consultant to the new Executive Director, a Capuchin Franciscan Brother with a background in adoption and foster care services who will take over.

“I’m happy (about this decision.) I feel that we need the best. We need the energy to do this work. I’m happy to retire, move on, but still stay connected.”

As she prepares to transition into her new role, Sr. Liz reflected on her legacy at Downey Side and hopes for the agency going forward.

“Children grow best in family, and that’s what we’re about. We’re about getting these homeless children into permanent families where they are loved and cared for, and that will always be my thoughts in terms of praying for these children and the agency.”

When asked what her ministry at Downey Side has personally meant to her, Sr. Liz teared up and shared, “I think that personally, I feel that I’ve done God’s work, and that was the reason I entered the Sisters because I wanted to continue to serve His children."