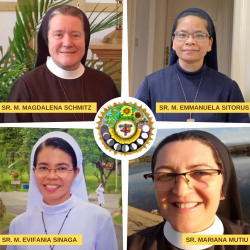 The Franciscan Sisters, Daughters of the Sacred Hearts of Jesus and Mary from around the world elected a new leadership team. “Our hearts are filled with joy in making this announcement,” said Sister Melanie Paradis, Regional Directress for the Wheaton Franciscans, the United States region of this international congregation.

The Congregation held its 30th General Chapter over Zoom March 21 through April 5, 2022.  Twenty-eight delegates, nine observers and special service support, including three laywomen, and nine interpreters participated. The group reconvened on Thursday, May 5, for the counting of the ballots and the announcement of the new team.

In addition to electing a new Congregational Leadership Team, the focus for the next six years will be spirituality and prayer; mission and internationality; the Laudato Si’ Action Platform; and the development of additional congregational teams.