Young Adult Retreat: Grounded in the Heartbeat of God 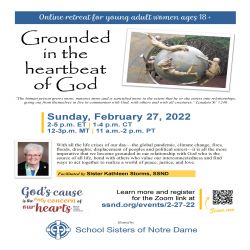 Through discernment, contemplative listening and other spiritual practices, retreat participants will become more grounded in God and aware of the interconnectedness of all life in the heartbeat of God. “The human person grows more, matures more and is sanctified more to the extent that he or she enters into relationships, going out from themselves to live in communion with God, with others and with all creatures,” stated Pope Francis (2015) in “Laudato Si’: On Care for Our Common Home” para. 240.

“The global pandemic, climate change, fires, floods, droughts, displacement of peoples and political unrest have shaken us to our very roots. It is all the more imperative that we become grounded in our relationship with God who is the source of all life, bond with others who value our interconnectedness and find ways to act together to realize a world of peace, justice, and love,” explained Sister Kathleen.

Sister Kathleen Storms, SSND, is a spiritual director and retreat facilitator with more than 45 years of experience. After serving on staff at the Loyola Spirituality Center in St. Paul, Minnesota, in the early 1990s, she founded the Center for Earth Spirituality and Rural Ministry in Mankato, Minnesota, where she served until 2003 when she was elected to the provincial council for six years. She then became director of Our Lady of the Prairie Retreat Center in Iowa for seven years and most recently served on the SSND General Council in Rome since 2018. Her specialties include leadership for a sustainable future, Laudato Si’ and Integral Ecology formation, the Enneagram and Visio Divina – Art in Prayer.

The NAVT accompanies young adults as they discern God’s call while informing them about the mission and charism of SSND, an international community of almost 2,100 women religious founded in Bavaria in 1833. The SSND mission is to proclaim the Good News, directing their entire lives toward that oneness for which Jesus Christ was sent. Continuing the sacred work of their foundress, Blessed Theresa of Jesus Gerhardinger, School Sisters of Notre Dame transform the world through education, giving special emphasis to women, young people and those who are poor. Learn more at ssnd.org.