For the past several weeks, Global Sisters Report has focused on the specific stages in the journey of refugees taken by an estimated 25.4 million people around the globe.

At every stage in our Seeking Refuge series, we found sisters and people working with them. They aid refugees in settlements and camps in Uganda and Jordan and assist asylum-seekers in the United States. They help resettle refugees in Europe and the U.S. heartland and find ways to work around increasingly hostile government policies designed to repel those who seek safety and economic opportunity. They restore dignity and a sense of hope to people whose dreams are dashed by deportation.

For many, this is a decadeslong ministry, but in our reporting this year, we found a new urgency and a new inspiration.

Pope Francis has made the care of migrants and refugees a major focus of his papacy. No other religious or political leader has done as much as the pope in calling attention to the moral dimensions of the current refugee dilemma and in reminding the world of our shared obligations to others.

Auza said U.N. efforts to respond to the challenges of migration are based "on the firm foundations of these principles that guarantee respect for the human dignity of all migrants." That this was done in a cooperative spirit is a reminder that even though the U.N. is an imperfect institution, it may be able to show us new and hopeful ways countries can work together to effect change.

The words of Pope Francis and action of the sisters demonstrate that the solution prescribed by the governments of the United States, Hungary and others — to block migrants at their doors — is no solution.

Wars (as in Syria and South Sudan), challenges caused by climate change (in Haiti and Zimbabwe), and political crises (in Honduras and Nicaragua) cannot be willed away. Countries must work together to tackle these seemingly intractable problems. Until then, migrants and refugees will continue to leave their homes in search of peace, stability and new opportunities.

It's important to be reminded that few people would leave home if they had a true choice. Deprivation or desperation leads someone to board an overloaded boat and sail across the Mediterranean Sea toward the unknown, to walk through the Sonoran Desert or pay smugglers thousands of dollars to cross multiple borders in search of a better life.

Politicians will try to exploit our fears, telling us that our resources are limited, that "they" are coming for our jobs, that "they" are changing the long-established and somehow superior culture, that "they" are asking for something they didn't work for, that "we" stand to lose somehow. We must resist this. Our Seeking Refuge series illustrates how communities and countries can be strengthened when strangers are welcomed and integrated.

The testimonies of migrants and refugees who have left their homes and countries because of war, political conflict, economic dislocation, the effects of climate change can seem overwhelming, particularly with a 24-hour news cycle that inundates viewers with images of desperate adults and frightened children. It is easy to look away, to declare the challenges of migration someone else's problem. But we should not. We cannot. Sisters show us the way, and much is possible.

A recent Leadership Conference of Women Religious newsletter on the issue of family separation and detention in the United States outlined four action steps and suggestions to support immigrant families:

Pray: Organize prayer vigils and ask pastors to include prayers for migrants in Sunday liturgies.

Learn more: Read Justice for Immigrants' backgrounder on the cost of family separation and other related readings. Recent columns from Srs. Janet Gildea, Tracy Kemme and Nancy Sylvester also offer insights, inspiration and practical suggestions on how to help change minds and hearts.

Francis, quoting from the Beatitudes, reminds us that "the great criterion ... on which we will be judged" is: "I was hungry and you gave me food, I was thirsty and you gave me drink, I was a stranger and you welcomed me, I was naked and you clothed me, I was sick and you took care of me, I was in prison and you visited me."

These words inspire and the work of sisters and the larger Catholic humanitarian network — Caritas, Catholic Relief Services, Catholic Charities, Catholic Legal Immigration Network Inc. and Jesuit Refugee Service — give us the means to act on this inspiration. 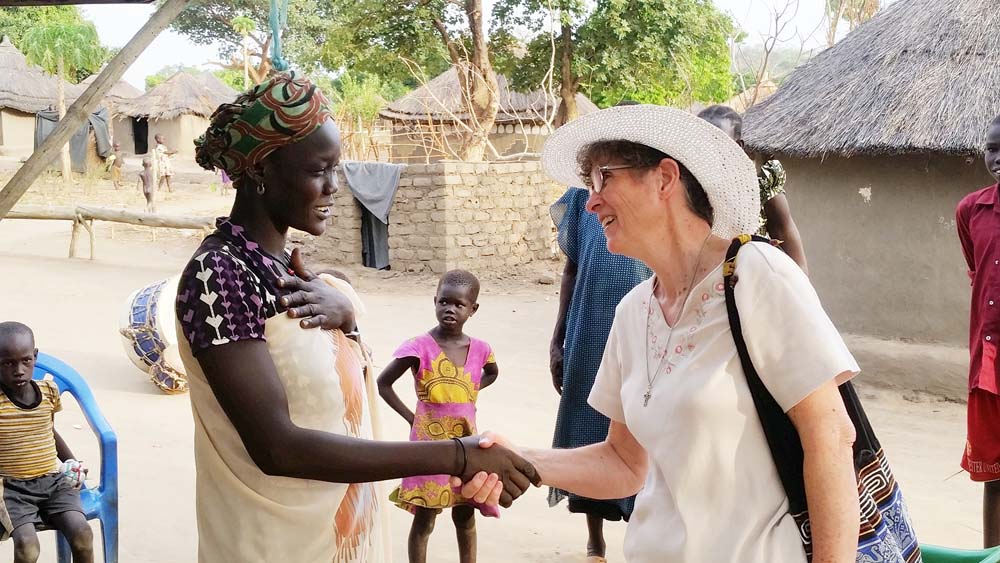