The analysis on women’s presence in media is of special interest to us here at Global Sisters Report:

• Women comprised only 24 percent of the news subjects in print, radio and television in 2010, a mere 7 percent increase from 1995.

• According to a study of 108 countries, 46 percent of these stories reinforced gender stereotypes and only 6 percent challenged stereotypes.

• We at GSR are working to improve those statistics. 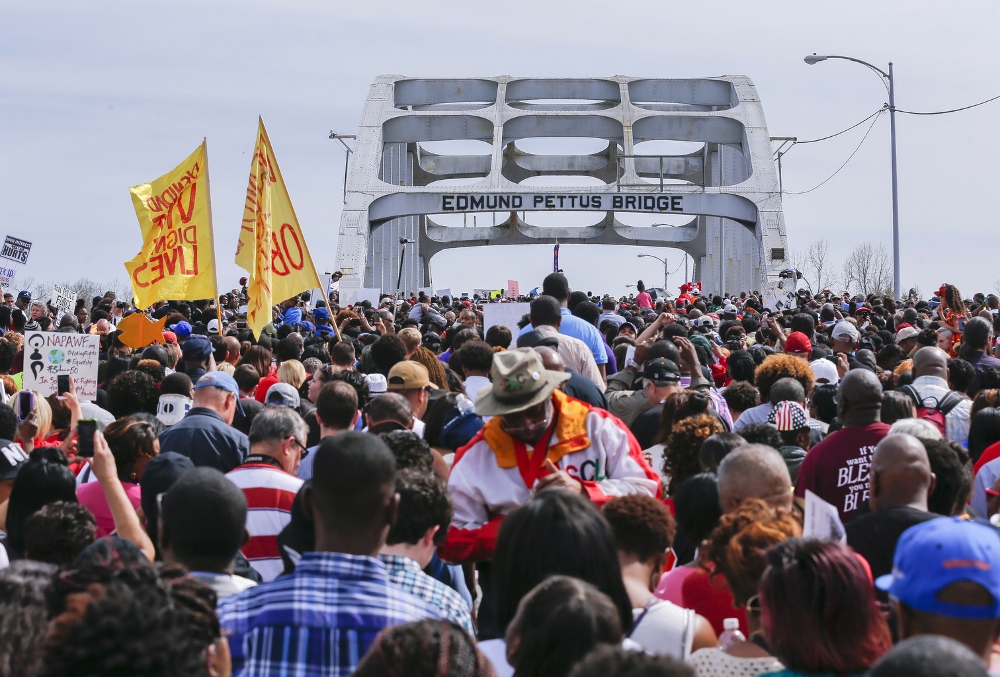 Thousands of people march across the Edmund Pettus Bridge in Selma, Ala., March 8 during a commemoration of the 50th anniversary of the 1965 civil rights march from Selma to Montgomery, the state capital. (CNS photo / Erik Lesser, EPA)

Both gratitude and hope welled up within me as I saw photos and videos of the mass of people crossing the Edmund Pettus Bridge on Sunday in Selma. Gratitude for all those who have gone before us, paving the way: for their courage and willingness to lay down their lives. Hope in the coming together, in the youth and the road ahead. Captured in a moment: both a celebration and a commitment to “keep on keeping on.” We know the work is not finished.

I’m also grateful for the journey that the 1965 marches in Selma sparked in the life path of women religious in the United States. Carol Coburn does an outstanding job elucidating it in “The Selma effect: Catholic nuns and social justice 50 years on.” Thanks, Carol, for capturing so well both our communal and individual transformations. For those who took risks and led the way, thanks! For those who joined in, our gratitude! We took to heart the call to enflesh our charisms and the gospel for our times. There’s no turning back! We march on.

It’s quite a week for gratitude and hope; for both celebration and keeping on! As we commemorate the 50th anniversary of the march from Selma to Montgomery, we also celebrate National Catholic Sisters Week. Check their website for events in your area. Global Sisters Report was in St. Paul, Minnesota at St. Kate’s for the weekend events. Look for our report online soon.

March 8, International Women’s Day, was celebrated around the world. Even with an event at the Vatican. Don’t miss what women panelists said about the participation of women in the church.

International Women’s Day also kicked off “Beijing + 20,” the 59th Session of the Commission on the Status of Women (CSW) which runs through March 20  at the U.N. Watch for Global Sisters Report coverage of some of the sisters’ activities during the CSW. (Ursuline Sister Michele Morek’s column this week gives an introductory glimpse of the work religious are doing at the U.N.)

This year marks the 20th anniversary of the Fourth World Conference on Women and the adoption of the Beijing Declaration and Platform for Action. The CSW will be assessing the progress made and the work left undone in the 12 critical areas of concern identified in Beijing.

Here are just a few statistics that caught my eye:

The analysis on women’s presence in media is of special interest to us here at Global Sisters Report:

Women comprised only 24 percent of the news subjects in print, radio and television in 2010, a mere 7 percent increase from 1995. According to a study of 108 countries, 46 percent of these stories reinforced gender stereotypes and only 6 percent challenged stereotypes.

We at GSR are working to improve those statistics. So many of our stories are about women religious engaging in efforts to enhance the lives of women and children; to bring about gender equality. Our goal is to bring you the stories not found elsewhere; hopefully, breaking down some stereotypes in the process.

As Good Shepherd Sister Clare Nolan put it in her column “Selma exists today globally, and women religious are among the multitudes of people of good will moving toward freedom.” And I might add equality.

Yes, women religious are joining the multitude who “keep on keeping on.”

And we are discovering what Loretto Sister Judith Mary so eloquently recounted in 1965: “We did not come to Selma to sprinkle holy water on the movement. We found out immediately that we came to Selma to join something we should have joined years ago.”

Social Justice | We march on for equality

In the deserts of the border, an exodus of today

Q & A with Sr. Michelle Woodruff, a public health nurse for Navajo people in New Mexico