When Nirmaya Mogor was 14, she studied in the sixth grade at St. Francis School, Pokhara, a tourist spot and gateway to a popular trail into the Himalayas. But Nirmaya lives in the Bus-Park slum — away from the attractions of Nepal's second-most populous city.

In November 2017, she had not been to school for the previous month due to a leg fracture that kept her indoors.

Her parents, unemployed and physically challenged, had no nutritious food for their daughter. Living in a slum, they face the challenges that more than half of Nepal's urban population endures daily, according to a 2014 World Bank report based on data from the United Nations.

However, the girl received warm chicken and vegetable stew, thanks to the thoughtfulness of Sr. Martha Park Byongsuk of the Congregation of the Sisters of St. Paul of Chartres.

The South Korean nun, popularly called "Sister Martha," had cooked the stew for Nirmaya and carried it through the streets on foot to serve it to her when she was housebound.

Nirmaya, now 16, is among the regular crowd at St. Paul's Happy Home that Byongsuk began for the slum children of Bus-Park. The home is named St. Paul's in honor of the patron of the congregation.

When Byongsuk spotted Nirmaya, the girl was studying in a public school but was stuck in the same grade for three years for lack of financial and educational support. The nun admitted her to the church-run school three years ago.

As Byongsuk walks along the narrow lanes of the slum, the young and the old alike fold their hands with reverence and wish her the Nepal greeting, "Namaste."

She wears a gray habit and a farmer's hat to protect her from the hot sun. At her back hangs a sling bag that contains a stethoscope and blood pressure monitoring equipment.

As the 69-year-old nun walks through the muddy lanes, an elderly woman approaches her and asks her to check her blood pressure. Others gather around her as she pulls out her equipment and patiently checks the pressure of those who ask for it.

Byongsuk has changed noticeably the face of the slum since she first set foot there in March 2009, Manu Nepali, a slum dweller, told Global Sisters Report.

Nepali is the first educator Byongsuk recruited to teach the children and has worked with the nuns for eight years.

Before Byongsuk's arrival, the people living in the slum were devoid of resources, recalls Nepali. The children could not go to school and people had no access to health care facilities. Some had no houses. But with the help of Byongsuk, the situation has changed considerably, Nepali says.

The children now have nutritious food and medical treatment and go to school. Impoverished children receive scholarships to continue their schooling, adds Nepali, who currently studies for a bachelor's degree in social work and hopes to work with Sister Martha for the welfare of her people.

Nepali regrets that the slum people do not receive any help from either the government or volunteer agencies.

Byongsuk explains how she landed in Nepal. The Sisters of St. Paul of Chartres in South Korea operated a big hospital, which they handed over to the Seoul Archdiocese when they decided to go to Nepal, a poorer country, to serve the people by setting up small clinics.

Fr. Lawrence Maniyar, who was then regional superior of the Jesuits in Nepal, invited the sisters to begin a clinic in Pokhara.

"On the first day, I carried a first-aid box and a blood pressure monitor and walked through the Bus-Park slum of Pokhara," Byongsuk recalls.

She admits what she witnessed in the slum had shocked her. The place was dirty, the people did not have clean drinking water, and it appeared they were starving.

For six months, Byongsuk and her sisters organized weeklong medical camps for the Bus-Park residents, with the help of 30 doctors and assistants from the Seoul Diocesan Peacemaker Foundation medical college in Korea.

"As a follow-up of the medical camp in the slum, I brought about 50 people who required medical treatment to the Manipal Hospital branch in Pokhara and got them treated for their diseases," Byongsuk told GSR.

Some had cataract operations, while others were treated for ear-and-nose problems and gynecological issues, she said.

"After the treatment, I brought one woman patient out of the hospital and asked her to return home, and I got ready to return to the convent," recalls Byongsuk.

The nun says she had forgotten to ask the woman if she had money to take a bus home, about two miles from the hospital. "At night, I felt Jesus asking me, 'Sr. Martha, how did you send her away without money for the bus fare?' "

So, the nun went to visit the woman the next day in the Pokhara slum to ask how she made it home. She replied she walked the entire distance, as she had no money for the bus fare.

"I always felt that I cannot help everyone in the slum, but I can perhaps help one family at a time," Byongsuk explains.

One woman who was helped by the nun is Ponmoya Gurung, mother of three girls and a boy. (Gurung is a common Nepalese surname for people of the Gurung ethnic group.) Her husband had deserted her after the birth of their fourth child. Gurung's struggles to bring up her children touched Byongsuk, who helped her build a house by providing financial support.

"But one day I realized that the eldest daughter was not in the house. On inquiry, I came to know that she had gone to engage in sex work in a guesthouse nearby," Byongsuk relates, her lips trembling.

The nun asked the woman to bring her eldest girl back home and promised to provide any help they might want. The daughter returned home, and since then Byongsuk has visited the family regularly.

Gurung says it was God who had sent Sister Martha to her family.

"We did not know God, but through Sister Martha now we know him, and through her, God has blessed us. We are grateful to God for the gift of a house," the woman in her 40s told GSR.

Byongsuk says she realized the Gurung children needed regular meals, bathing and a safe place where they could study.

She began to gather the slum children once a week to give them baths and feed them. She soon realized that it was not enough to feed them just once a week. So, in 2011, she and her sisters launched "Happy Home," where the children go after school, have a meal, bathe and study until evening.

Today, some 120 children are cared for at Happy Home, which has provided jobs for local people.

"One of the most important focus areas in the slum was hygiene and cleanliness. When a group of Korean volunteers visited the slum, they taught the children how they can keep themselves clean," recalls Nepali.

Byongsuk says that initially when some children accompanied her to the parish church, the parishioners were put off by the children's untidy presence. But today these children are perhaps cleaner than the regular churchgoers, the sister observes.

Happy Home has 12 staff members who take care of all the children's needs. The teachers help them prepare for final examinations and to complete their homework, says Sr. Agnes Kim, another South Korean nun and teacher who looks after the Happy Home children.

Kim, 50, has worked in the home for the last four years. She says she enjoys her work with the children and receives help and cooperation from parents and neighbors.

Byongsuk has turned her attention to the care of the parents, organizing regular health camps and teaching them ways to keep their homes tidy.

The lack of running water is a major problem in the slum. Most houses have no toilets or bathrooms, Byongsuk says.

The sister first thought of building common toilets and bathrooms but realized it would be difficult to keep them clean. Thus, with the help of Korean volunteers, she built 10 toilets in the slum, and the government has built others to improve the situation.

Her goal is for every family to have a separate toilet.

To provide employment for the mothers in the slum, Byongsuk has set up a tailoring center to train them. At present there are eight sewing machines available for them to use, and there is keen interest among them to learn to the trade, Sr. Martha says.

Byongsuk had planned to increase her health care efforts in the slum, but, fearing government criticism, reduced her health visits to once a week.

She says that whenever she finds someone who might require medical care, she takes that person to Manipal Hospital for treatment.

She hopes she is planting the seeds for sustaining her efforts.

"I want the young people to take up these works and take them forward, because the young ones are more creative and daring," she says.

[Jesuit Fr. Julian S. Das is the former was the editor of The Herald, the weekly of the Calcutta archdiocese weekly, and former director of the Jesuit-managed Chitrabani, founded in 1970 in Kolkata as the first media center in eastern India. He is a correspondent for Matters India, a news portal that collaborates with GSR and focuses on religious and social issues.] 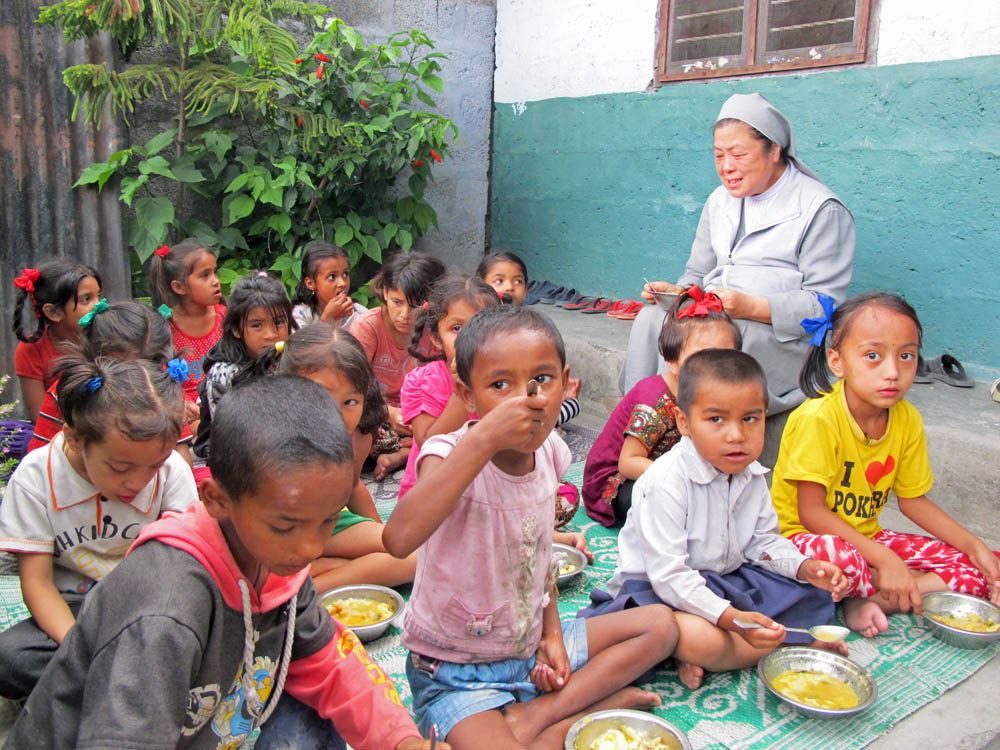