Living on a Belfast peace line 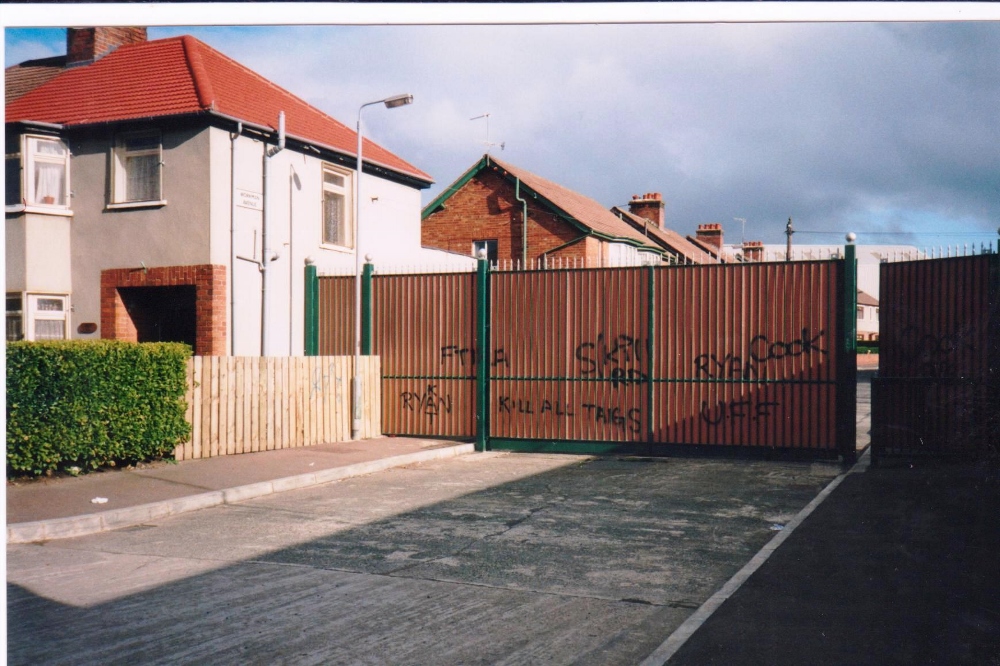 The front of the house at 369 Springfield Road, with anti-Catholic graffiti on the gate. (Kathleen Keane)

Many different kinds of peace lines still crisscross Belfast city and suburbs. Even now, 15 years into the Northern Ireland peace process, these walls show little sign of coming down. While politicians occasionally raise the question of removing them, dialogue at the local level has not succeeded in promoting the mutual trust necessary to overcome cross-community nervousness. A whole generation of people born and raised practically next door to each other have never met or socialized together. And so many still have misgivings about dismantling the trappings of deadly past hostility. Living on such an interface continues to be challenging.

In 1993, I discovered that Sr. Noreen, a Dominican friend from our South African days, had established an inter-faith community in Workman Avenue, off the Protestant Shankill area. This was in character: After the unequal apartheid situation, Noreen was again on the margins and had now put herself in some danger. Local Catholics refused to believe that there was a nun living on the “wrong” (Protestant) side of the ugly “Peace Line.” And Protestants, who lived on that side themselves, also found it incredible at first. The little “curragh” (small boat) community was a witnessing group, coming together from different countries, with different faiths, and happily co-existing under one roof. Their objective was to model a lifestyle thatr proved peace and reconciliation were possible, in spite of difference. For their trouble they constantly got their windows broken. This they came to regard as minor collateral damage and resisted putting up unsightly protective grills.

Noreen had previously introduced me to the area, with its ugly metal barrier blocking Workman Avenue, at the junction with Springfield Road. This heavy gate was part of the long, high wall extending down towards the city, one of Belfast’s many peace lines. Two semi-detached houses, which had survived the exodus from this area, had become incorporated as part of this dividing wall, or Peace Line. Now it was proposed to rent one of them and open an office of the Conference of Religious of Ireland (CORI) there. At one level this was another unlikely initiative, given the general dereliction of the area. However, at Noreen’s invitation and in a weak moment, I had agreed to undertake this ministry. I would live in this house as a sub-tenant of CORI and try to extend the goodwill initiative in both directions, as befitted the justice and peace ideal. However when I arrived, accompanied by my bicycle, I began to have serious misgivings.

The house which was to become my home, 369 Springfield Road, had been badly vandalized and the gardens, back and front, turned into veritable dumps, fences long gone. I was in no hurry with the restoration, seeing the graffiti on what was to be my gable wall: “Kill all Taigs” (Catholics), it said! But some of my apprehension faded in the warm, welcoming and open atmosphere of the curragh community, where I would be staying until my house was ready. From the kitchen window, I now observed the back of Number 369 and some slow activity there by workmen and painters. No hurry at all, I reflected often throughout that dark spring.

But eventually at Easter, the painting was finished, and since I could stall no longer, I got involved in the clean-up and moved in. This made me physically a part of the Peace Line itself, in the firing line for whatever people wanted to aim or throw at each other. My front door opened onto Catholic Springfield Road, while at the back, my garden gate accessed Protestant Workman Avenue. I found that even during the night, I needed to know from which direction the missiles came, whether they were Protestant or Catholic in nature! It was often stones which would hit the house, or the adjoining barrier. Many more went overhead in both directions, one of the advantages of being “piggy in the middle.” A lethal rocket was once fired during my tenancy, but thankfully missed its target.

At least now in April there was more daylight; and I became immersed in various activities, mostly of a cross-community nature, organised at the curragh, or in the Methodist church hall next door. My only other neighbours on the front of the road were an elderly couple, Paddy and Mary McCaffrey at 371. They had lived on Springfield Road ever since it had been a leafy, desirable place and had refused to sell up and move when all their neighbors left. Pleased that I had moved in, Paddy suggested to me that, whenever anyone went by my garden fence, back or front, I should say to them: “It’s a nice day today.” So I rehearsed this doubtfully, in what I hoped sounded like a Belfast accent. Meantime we continued with our gardening, Paddy helping me to bring back some order and beauty to my little patch. 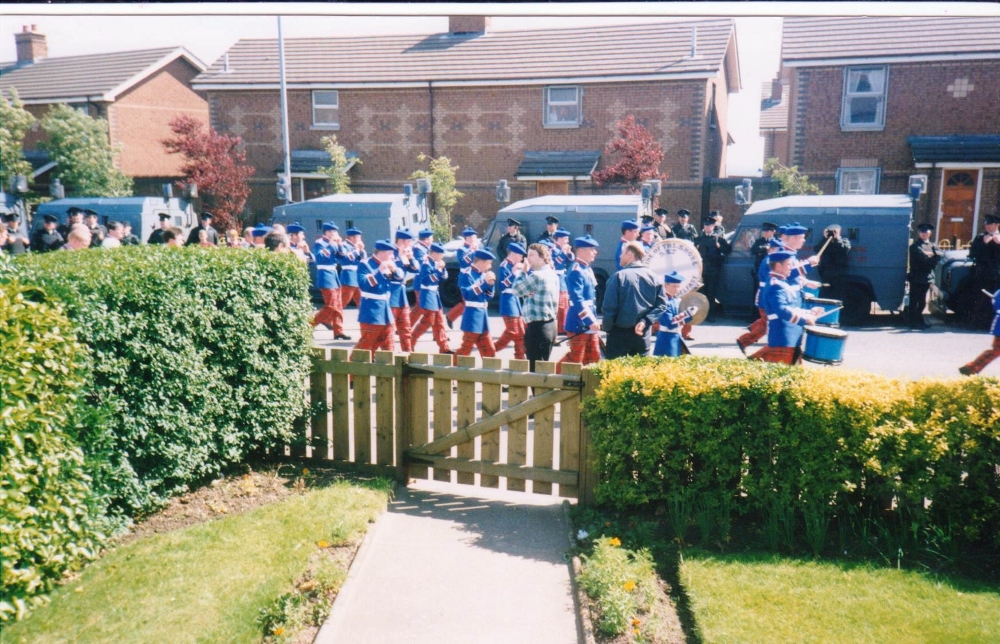 The enormous metal barrier blocking Workman Avenue and attached to the side of my house was opened only twice annually, by a team of police who began the tricky operation before 6 a.m. This was in order to allow the local Orange Parade through onto Springfield Road. It would take the police most of the evening to close the gate securely, after the marchers returned and the long day’s vigil was over. Such interfaces had invariably become flashpoints. And paradoxically, with Mary and Paddy, I tended to be targeted also by Catholics who presumed, because of our position, that we belonged to the “other side.”

There was a small pedestrian access gate in the peace line and this was usually open in daylight hours. But it was locked every evening, and also at any other time when there was trouble locally – a regular occurrence. When people unexpectedly found it locked, they would sometimes ring my doorbell, asking permission to pass through the house. Or, from the back, they would come into the garden, round the kitchen to the backdoor, asking to go out onto Springfield Road, again walking through the house. “It’s a nice day today,” I said to everyone. And it worked; I began to make some good friends.

But word was spreading about this escape route through Number 369, which made me uneasy, given local paramilitary activity. Everyone, even Mary and Paddy, advised against allowing anyone access through the house. But I found it difficult to refuse, when confronted by someone who was genuinely “stuck,” and impossible when it was someone that I knew. One morning a friend phoned to tell me that a visiting clergyman had written a poem about me. I sat down in some shock, while she read it to me; and this is part of what I heard:

“…A woman came out of her house,
…..
We talked.
“What is it like living on the Peace Line?”
“It’s all right. It can be tense sometimes.
Occasionally when stones are thrown, my windows get broken.
Recently during the marching season,
The roads were blocked and the gate in the wall shut.
When that happens my house is used as the Gate”.
……
“How do you feel about this use of your house?”
“It’s OK, I know most of those who come through.
I feel a bit uncomfortable when I don’t know someone,
But I never refuse access to anyone.”
I went away reflecting on the words of Jesus:
“I am the Gate. By me you shall go in and out.”
The woman showed me Jesus in the City.[1]

I remembered the garden-gate encounter with this man, although visitors wanting to experience a peace line were plentiful in Belfast. But I disagreed with his assessment of my altruism; and did not analyze my motives in this way at all. As I was living on the interface, it seemed expedient to me usually, to allow people to pass through the house, in the interest of good community relations: the aim of all our efforts. Since there was so much suffering allied to the failed political system, we tried to offer friendship, presence and solidarity through listening, in an effort at mutual understanding. While adult education remained key, shared local activities also had a social, cultural and sometimes religious dimension. The famous Belfast black humour was an important shared resource. Our hope was that our neighbourly presence would influence changing attitudes across present and future generations. Only then will the walls come down.

And this hope seemed to be justified at the memorable wake held after Paddy’s death due to a stroke. People flocked to the house throughout that night, in unprecedented numbers and from all quarters. Paddy was remembered for the friendliness and welcome he offered to all and sundry, regularly trying to engage passers-by, even strangers, in chat or banter. He had loved diversity and reached out to all, of whatever persuasion, ethnicity, gender or allegiance. And he was fondly and vividly remembered for the humour with which he tried to maintain normality in our barricaded and polarised area. Indeed at his wake, he still seemed to be reminding us that, as the African proverb says: A greeting builds a village. I imagined that I could hear him saying, “You see, it works. Keep telling people that, ‘It’s a nice day today.’”  The process well-begun at this interface by a few risk-takers is now being continued by others and in time, the wall surely will come down.

[During nearly 60 years in the Little Company of Mary, Kathleen Keane has traveled extensively, initially as a missionary nurse in southern Africa. She holds a bachelor’s degree in English and psychology and a master’s degree in women’s studies. While living on a peace line in Northern Ireland she studied bioethical aspects of healthcare and gained a master of philosophy degree from Queen’s University, Belfast. Now retired, she lives in a large Dublin community.]

Living on a Belfast peace line