Hundreds of protestors are expected to make their annual trip to the gates of Fort Benning, Georgia, Nov. 21-23 to demonstrate against what they say is a school that teaches human rights abuses to Latin American militaries.

The annual protests against what was then the U.S. Army School of the Americas were begun in 1990 by then-Maryknoll priest Roy Bourgeois following shocking crimes: The murder of a missionary and three women religious in El Salvador in 1980, and the 1989 massacre of six Jesuit priests, their housekeeper and her daughter. Both crimes were tied to graduates of the School of the Americas.

Under intense criticism, the school in 2000 changed its name to the Western Hemisphere Institute for Security Cooperation. Officials insist the institute trains militaries to protect and defend human rights and democracy – protestors say nothing has changed but the window dressing and continue their November vigils. In 2006, a record 22,000 attended.

She was supposed to be with them.

Dorsey had been ministering to the poor in El Salvador for five years, including the last year, when she worked alone serving 8,000 people in a rural diocese. It was Dorsey and Sr. Terry Alexander, another Maryknoll, who later identified the bodies of the four women when they were exhumed from a shallow grave.

That Dorsey was serving those in need despite the danger – Archbishop Oscar Romero had been assassinated eight months before – should not be a surprise: Even then she had a history of going wherever in the world she was needed most.

Dorsey was serving in Sri Lanka in 1955 when she was called to Kansas City, Mo., where Archbishop Edwin O’Hara wanted to open a racially integrated hospital, the first in Kansas City and one of only a handful in the nation. The hospital, called Queen of the World, was run by Maryknoll sisters, with Dorsey as the administrator.

It was so successful that it closed in 10 years – other hospitals in the area had integrated and it was no longer needed. The Kansas City Star reported three months after it opened that, “From the nursery and children’s ward come the sounds of youngsters, white and Negro, happy patients together who don’t know what a color line means. Their parents, and adults generally in Kansas City, are increasingly becoming aware that race should be no factor in the hospital care of human beings, anywhere.”

So naturally, in 1965, Dorsey was in Selma, Alabama, on the front lines of the civil rights marchers. She was there when state troopers attacked the non-violent marchers with clubs, sending 17 of them to the hospital. Dorsey, now 96, was not injured.

She has also served in Bolivia, where she helped set up a jungle hospital, in Kandy, Sri Lanka (Ceylon until 1972), and in Peru, where she was an obstetric nurse and cared for premature infants.

Dorsey said that even in moments of danger, you only realize later how frightened you were.

“You have this wider concern for the people who are still suffering, still being attacked,” she said by telephone from the Maryknoll Center in New York, where she lives. “You’re with them, you accompany them. You’re worried about them.”

That was the attitude she had in El Salvador, where a civil war between the right-wing government and leftist rebels put the poor and those who served them in the crosshairs of government death squads.

“It’s not that it’s not scary,” Dorsey said. “Of course it was scary. I was alone in this rural colony. But you’re peaceful because you accompany the people through their suffering. You’re focused on them.”

That focus served her even when El Salvador descended into chaos.

“You focus on the people you’re serving, so when the soldiers are at the door, all you’re worried about is getting the medicine to the people who need it, getting food to the people who are hungry,” Dorsey said. “When you find yourself alone like that, you feel your heart in your mouth and I did. But you keep working.”

When there was fear, she said, it was fear for your family and loved ones.

“You think they’re not going to know what’s become of you, and that’s going to put the burden on them,” Dorsey said. “But when you accompany people who are living the pain and losing their families, you know they are people of God, and you’re not focused on yourself.”

She understood that burden intimately on Dec. 2, 1980. Dorsey, Alexander, Clarke and Ford had been at a Maryknoll conference in Nicaragua. Before the trip, Dorsey had earlier sent a cable to Clarke and Ford saying they should all take the same flight back to El Salvador, a cable she now says must have been intercepted by the military officials who had her under surveillance.

Five national guardsmen were waiting for the flight.

They took Clarke, Donovan, Ford and Kazel to an isolated area where they beat, raped and killed them, then took their van back to the airport road and left it. Peasants who saw the van and heard gunfire found the bodies the next day and were ordered by local officials to bury them in a common grave. They did so, but also told their parish priest.

Word reached the local bishop and the U.S. ambassador, and the next day Dorsey and Alexander rushed to the site.

Dorsey described the scene for Maryknoll Magazine in 2010:

“Then came the painful extraction of the four – piled one on top of the other,” Dorsey wrote. “Jean was first, her lovely face destroyed. Dorothy had a tranquil look. Maura’s face was serene but seemed to utter a silent cry, and last little Ita. I went forward to wipe the dirt from her cheek and place her arm at her side.”

But Dorsey doesn’t remember that awful moment as a moment of death. For her, that moment has always been about resurrection. Those three days, she said, are like the Easter story:  “They had the Good Friday, we had the long, long Saturday. And Sunday was when we finally knew they were in heaven,” Dorsey said. “Sunday was the relief: We didn’t know for three full days. We searched. We prayed. We called everyone.

Was Dorsey haunted by the knowledge that she was supposed to have been on the same flight?

“Not at that point, because we didn’t know what had happened, but later on I was,” she said.

In 1984, five former Salvadorian national guardsmen were convicted of the murders; four of them later told lawyers for the human rights committee they had acted on orders from superiors. Those superiors were allowed to settle in Florida about 25 years ago, but in the last two and a half years have been facing immigration judges who say the generals are responsible for human rights abuses and should be deported.

Dorsey can no longer travel to the SOA Watch vigil – she used to always attend and once spoke and led prayer, she said – but is honored by the response to it over the years.

“I think it’s wonderful. It’s great,” Dorsey said. “It’s been a wonderful showing of the morality they [the protestors] stand for and the realization of the depth of these crimes.”

Related: National Catholic Reporter is running a two-part series by Mary Jo McConahay about the 25th anniversary of the massacre at the University of Central America in San Salvador, El Salvador, when six Jesuits, their housekeeper and her daughter were murdered by the military. 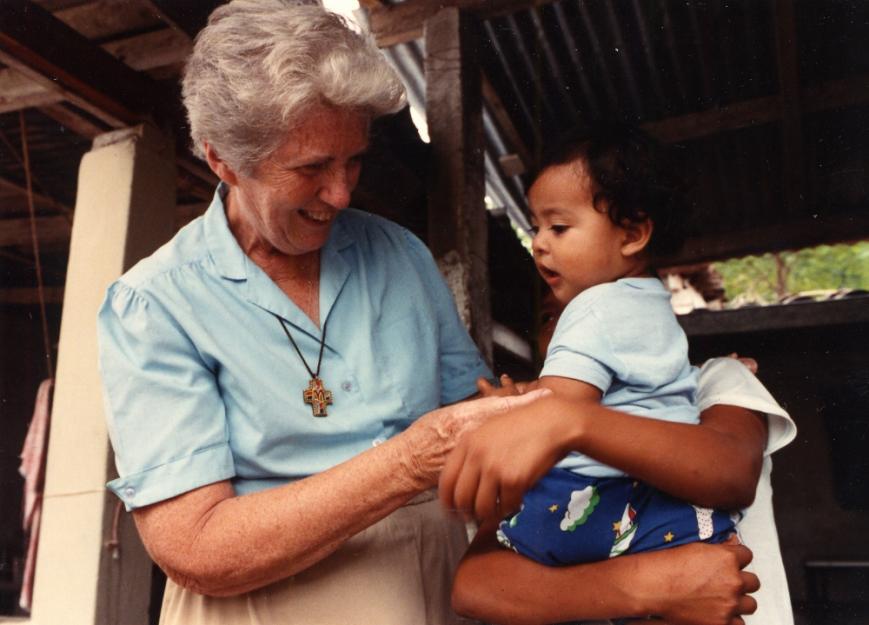 Sr. Madeline Dorsey with a child in El Salvador in the late 1970s. (Used with permission of Maryknoll Sisters) 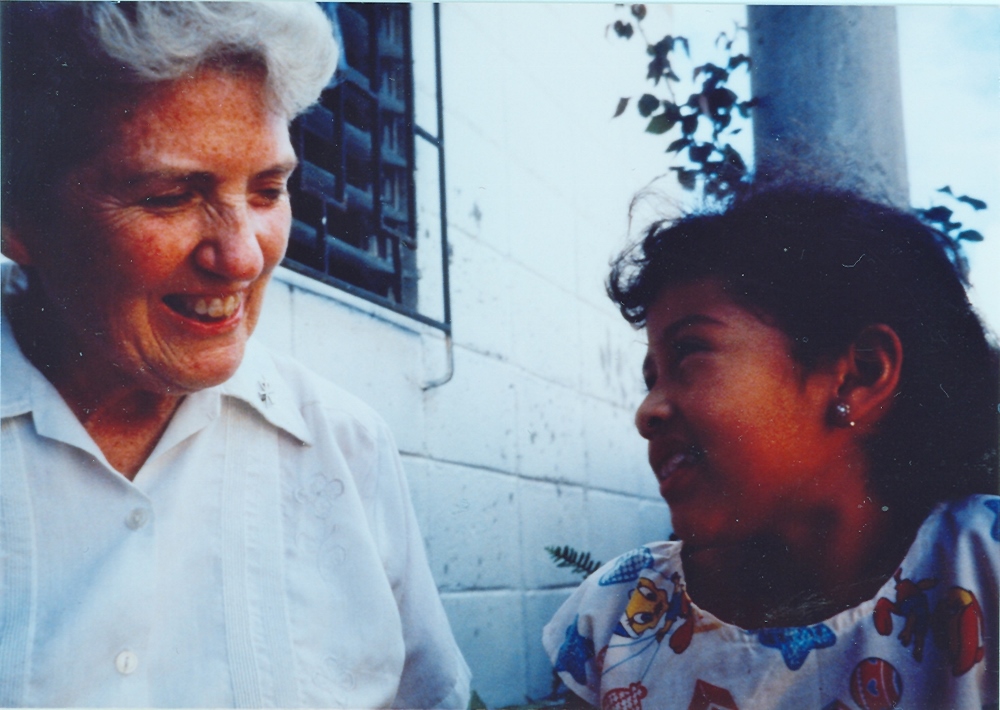 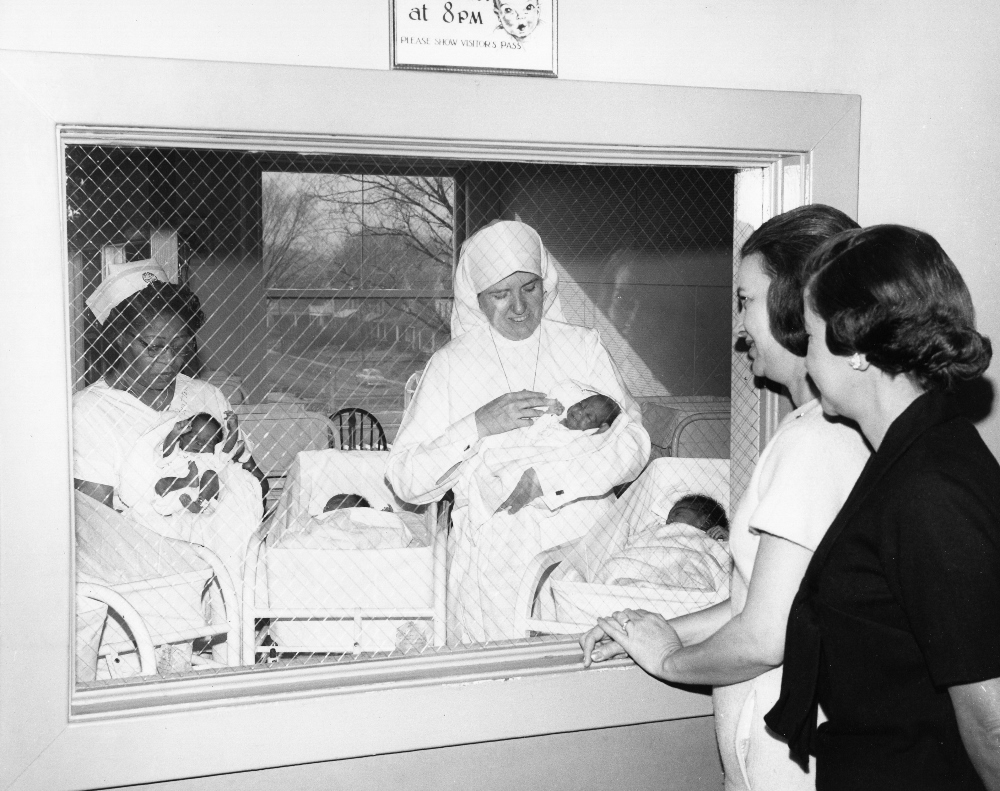 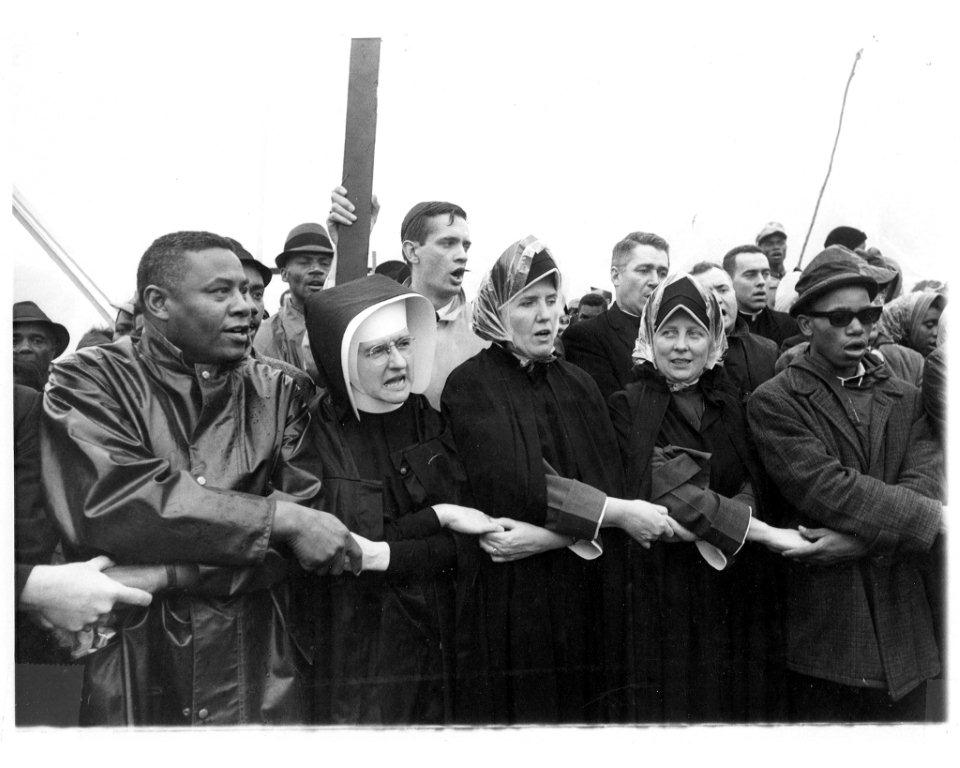 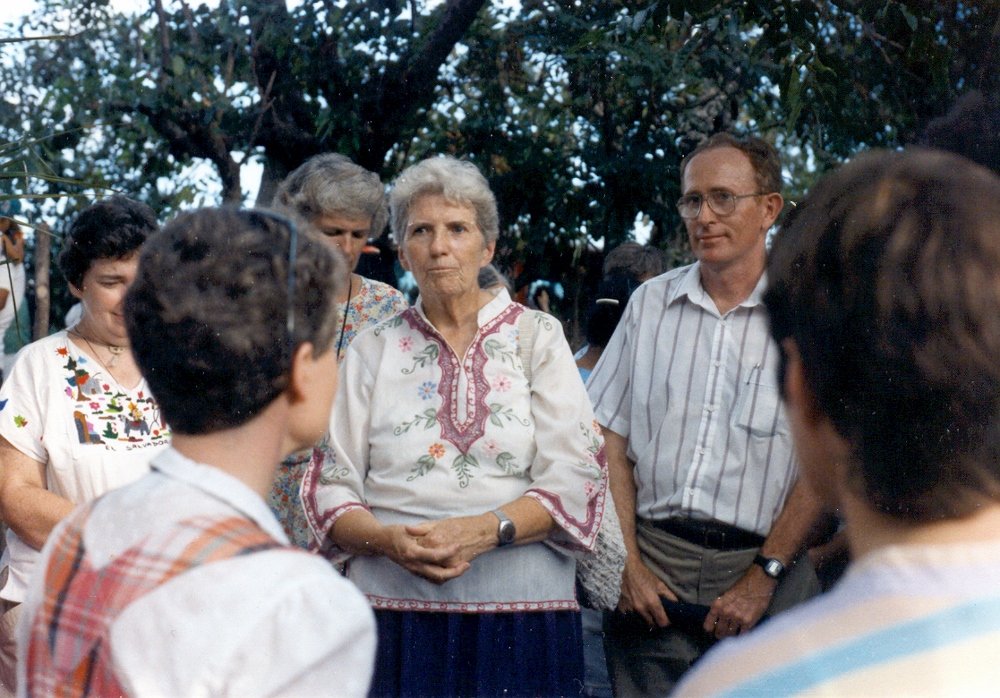 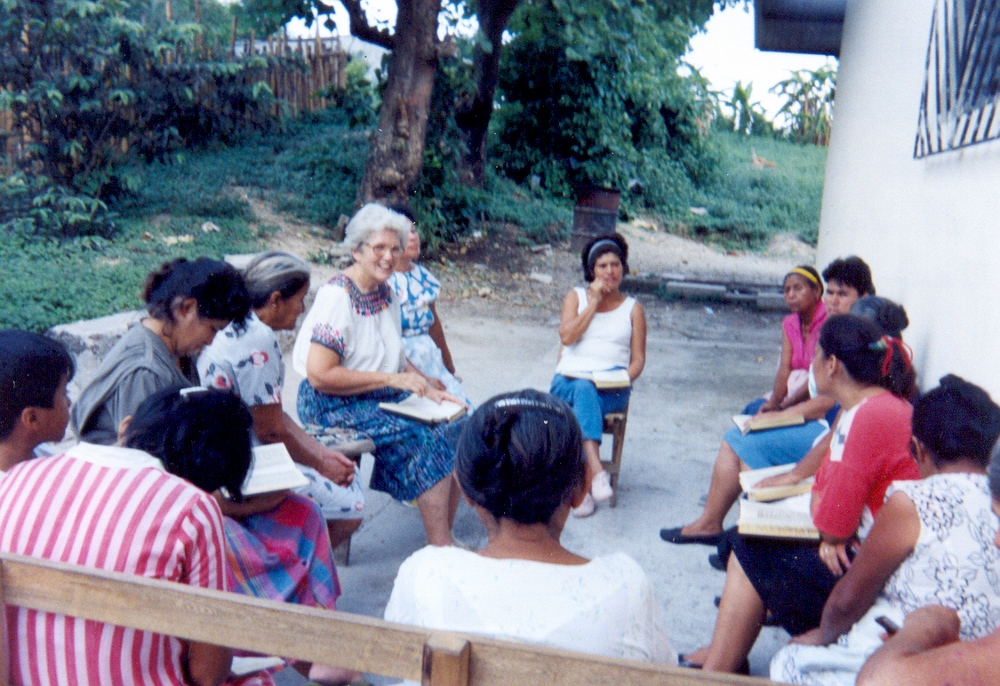 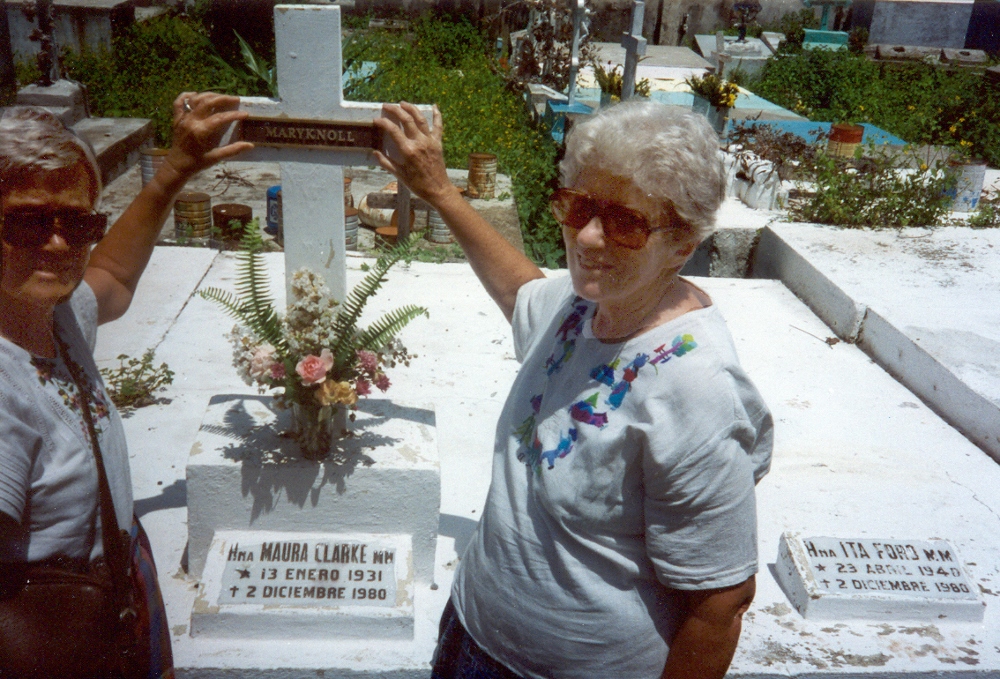 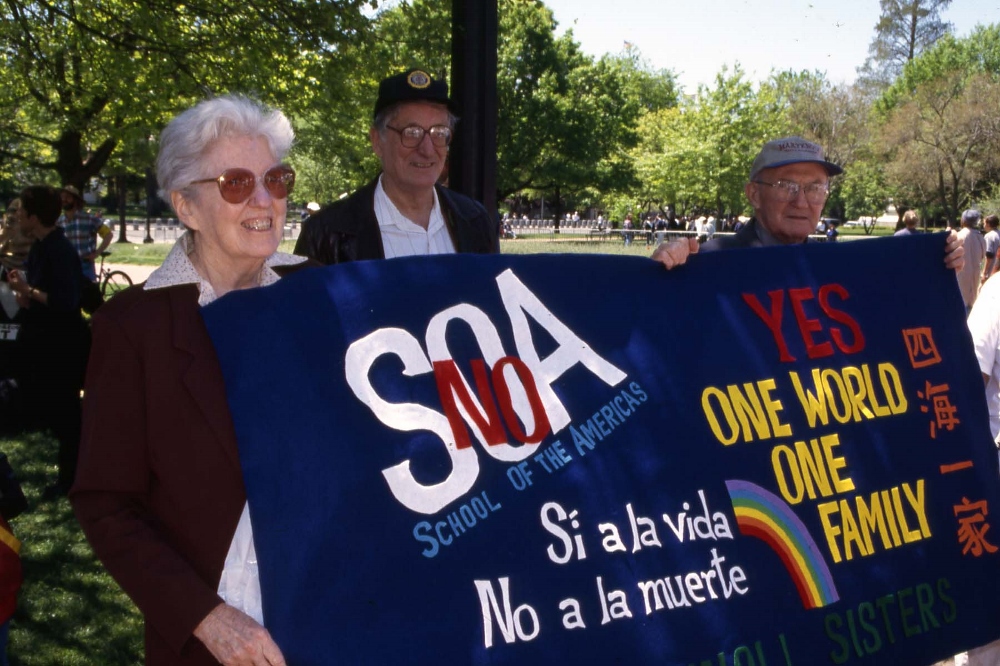