A piece of the U.S. justice system 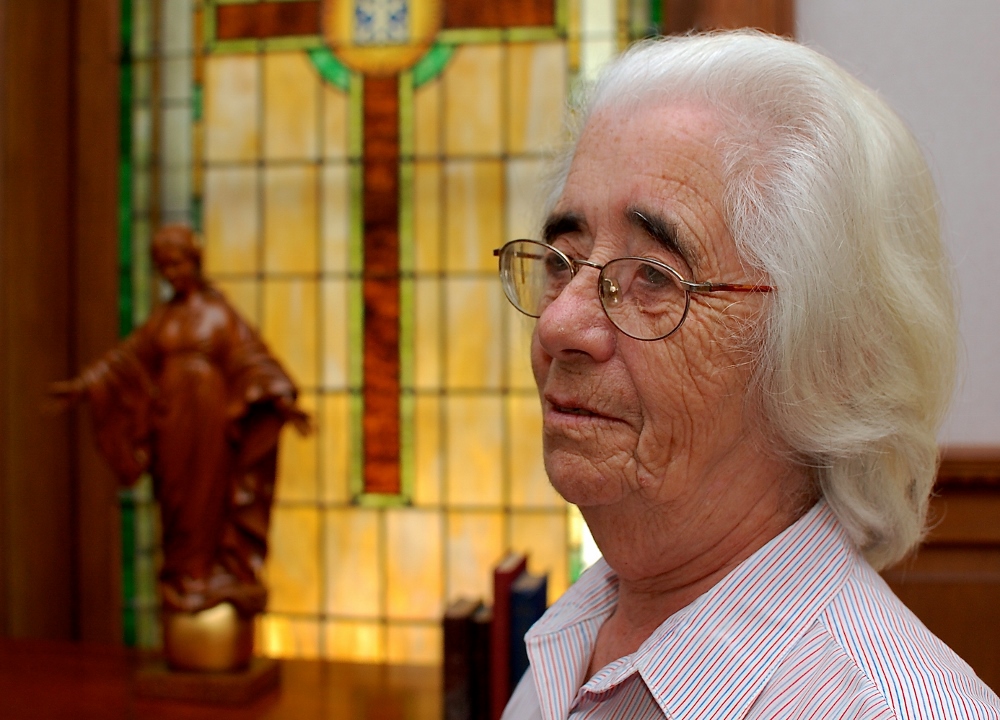 South Bend, Indiana — The calls to the convent come at all hours, from relatives and loved ones of those in jail. But everyone knows not to take a message.

No, the calls of the desperate are transferred directly to Sr. Sue Kintzele’s room, where they can leave a message on her personal voicemail. Because if you want out of the St. Joseph County lock-up and can’t make bail, it’s Sister Sue’s eyes you’re going to have to look into and make your case.

In many Indiana counties, there are bail bondsmen, people who will – on your good name or collateral – help put up the money to bail you out should you run afoul of the law. Show up for court as ordered, the court returns your bail and the bondsman is paid back at a profit.

But in St. Joseph County, there are no bail bondsmen – there is only Kintzele.

“The mothers are the ones that get to me,” she says. “When they’re pleading for you to help.”

And so she listens to the phone messages, talks to the relatives and interviews the person in jail. And when she thinks they’re a good risk, she helps bail them out.

She’s been doing this for nearly 40 years.

“The money’s still there and I’m still here,” Kintzele says. “It still needs to be done. It’s like most things – I keep doing ’em until someone tells me to stop.”

‘One thing led to another’

She grew up in nearby Michigan City and entered the Sisters of the Holy Cross in 1959.

“This was before Vatican II, so I just thought of teaching,” Kintzele says. “At that time what sisters did was teach and nurse.”

And she was fine with teaching, getting a bachelor’s degree at St. Mary’s College in South Bend – where the Holy Cross congregation is – and a master’s degree across the street at the University of Notre Dame. She taught high school for 12 years in Flint, Michigan.

Returning to South Bend, she got involved in a program on institutional racism through Notre Dame’s Urban Studies Institute, which led to her being on a welfare reform task force, which led to a group of priests, brothers and sisters opening a Justice and Peace Center in the mid-1970s.

“One thing led to another,” she says. “My superior asked if I wanted to represent the sisters, and I said, ‘Why not?’”

One of the projects the center put together was a fund to help those who couldn’t make bail. They used donations to create the fund, and when bail was returned the fund would be replenished.

Decades passed, the Justice and Peace Center closed in the late 1980s, and the priests, brothers and sisters involved drifted off. But not Kintzele.

“I call it recycled money,” she says. “It’s money I keep using over and over.”

Did she ever foresee that nearly four decades later, she would still be continuing the work, still recycling the donations, still as regular a fixture at the jail and courthouse as some of the clientele?

“I had no idea,” she says. “When you enter [the convent], that was not even a possibility.”

Kintzele’s name is passed from inmate to inmate like a secret handshake, and she’s probably one of the few sisters in the world who’s glad to have her name and number written on the jailhouse wall.

But the calls for help don’t come from the inmates – they are only allowed to make collect calls, and she won’t accept the charges. Instead, the Inmate Services staff at the jail collects names and calls her with a list, or relatives call. Whatever the source, the call starts the wheels slowly turning – and they do turn slowly.

While the people she works with are presumed innocent, a few days in jail until bail is arranged can be, ahem, good for the soul. Even absolution, it must be pointed out, often comes with penance.

Kintzele is also quick to say she does not put up the entire amount needed for bail – usually only a couple hundred dollars at most.

“I’m there to make up the difference when the family can’t get all the money together, when they’re a little short,” she says.

She talks to the family, and then interviews the inmate and decides whether to help.

But she also has some rules: No child support cases, because when the bail is returned, it’s usually seized by the court to pay the offender’s outstanding debt. That means less money to help others.

She doesn’t help with serious crimes such as murder, but mainly because the bail amounts – when bail is even a possibility – are so large the few hundred dollars she can contribute doesn’t matter.

Drug cases are a tougher decision.

“With drugs, you’re hurting yourself more than anybody else,” she says, so helping with bail wouldn’t be an issue. But some people facing drug charges need the time in jail to break their addiction; so bailing them out doesn’t help. On the other hand, there’s no real treatment in jail, either, so once the initial chemical dependency is broken, there’s no point in keeping them locked up.

“One man I helped the other day, and two days later he was back in jail,” she says, shaking her head. “It’s probably best that he stays there.”

Not because he’s a criminal.

“Heroin,” she explains. “He almost died twice. But he had a begging father, his family gave in and helped, and I gave in. At least I know he’s safe now.”

She tells of a woman asking for help who is also probably best off the street for a while.

Does she ever worry about lending money to people accused of crimes? Especially repeat customers?

“Someone who’s there all the time, well you know they’re going to come back to court,” Kintzele says. “The ones who are not coming back are the ones who are scared.”

While bail bondsmen use collateral or debt collectors to make sure they’re paid back, Kintzele doesn’t need to play the heavy.

“Some people have said that they wouldn’t want to mess with my money,” she says laughing.

There are mortals looking out for her, too: The court clerk staff keep Kintzele’s money on a separate receipt so they can ensure she gets paid back first before any fees are taken out.

Of course, bail is money put up as a promise to appear in court. Has she ever lost the bail money?

“It may sit there for years in some cases, but they’re going to catch you some time,” she says, and when they do, Kintzele gets her money back and uses it to help someone else. “Some have been gone for a while,” she says with a sigh. “One, seven years later I got it. But they’ll show up sooner or later. The judges, very seldom do they actually make them forfeit the bond.”

Because of that, even after all these years and thousands of cases, Kintzele still has a pot of about $15,000 to use. At any given time, about $12,000 of that is put up for bail.

“I was at the jail this morning,” she says. “I’ll be back there tonight.”

So why does she do it? After all, she’s 74, and has plenty to do: She teaches math at Indiana University’s South Bend Campus and works with nearby Dismas House helping those recently released from prison return to the outside world.

And certainly she must hear from critics who say that anyone in jail deserves to stay there.

“The main reason people are in jail is they don’t have money,” Kintzele says. “But they can help their attorney better if they’re out. It gives them a chance to work, to take care of their family, take care of their kids. I lot of times, I do it for the mothers and grandmothers – they’re the ones stuck taking care of everyone while the person’s in jail.”

And those who say a woman of God should not be consorting with sinners?

“Everybody’s done something that probably could have put them in the same spot, but is it always as bad as it seems, or is there a chance to do the right thing?” she asks.

And it seems there’s always a wife or mother or boyfriend or someone on the phone, asking Kintzele if she can please help.

“I’m not a big emotional person,” she says. “But you think about it a lot.”

Ministry | A piece of the U.S. justice system

Political unrest, threats do not deter Friends of the Poor Sisters in India