Sr. Carol Perry loved to read as a child growing up in Kingston, N.Y. One book she didn’t crack, though, was the Bible.

Though she continued reading as a Sister of St. Ursula, she didn’t read the Bible, despite teaching religion and English at John A. Coleman High School in Kingston, located about 100 miles north of New York City.

It’s an unlikely background for a woman who would one day break new ground as a resident Bible scholar in one of the most prominent Protestant churches in America.

“The Protestants had the Bible and the Catholics had the sacraments,” she says. “I was raw material.”

Sitting in her small 10th floor office overlooking Fifth Avenue in midtown Manhattan, Perry reflected on the journey that brought her to Marble Collegiate Church, where her ongoing Sunday morning Bible class is standing-room-only. (Marble Collegiate is the oldest place of worship of the Collegiate Reformed Protestant Church in New York City, organized in 1628 under the Dutch West India Company.)

“In the 1950s there was not a university in the world where a Catholic woman could study the Bible,” she said, explaining that although Mothers General bugged the seminary professors, Rome kept saying no.

Her chance came in 1957 when she joined about 60 other women from 32 countries to study sacred Scripture at Regina Mundi Pontifical Institute in Rome.

“It was a total revelation to me,” she said, a trace of awe in her voice. She discovered the book was “dealing with flesh and blood human beings. These are not just words, there are people here.”

Perry went on to receive a Master’s of Sacred Science degree from St. Mary’s at Notre Dame, Ind., and then shared her love of Scripture with her order’s novices and in occasional talks. A member of Marble’s congregation heard one of Perry’s talks and mentioned it to Florence Pert, one of the church’s ministers at the time. Pert began to pursue Perry to teach a Sunday morning, pre-service adult Bible class. Perry declined several times. The class would start at 9 a.m., which meant she would have to spend Saturday night with sisters in the city, because Kingston was a two-hour bus ride away. She also thought, “This is a Protestant church, and I’m a Catholic nun.”

But Pert persisted. Eventually, Sr. Carol interviewed with Dr. Norman Vincent Peale, the senior minister. Perry talked with Peale, a famous Protestant preacher and best-selling author of The Power of Positive Thinking; they then decided to give it a try for six weeks.

“They were wonderfully open,” Perry said. “My approach to the Bible is that this is the word of God in the values of real people with real lives and hopes and fears, not the word of God as recorded by people. They are different views with the same end. They were a really hungry audience, which is what any teacher loves.”

The congregation contained few Catholics. Perry was the first nun most members had ever met. That has changed drastically now, with former Roman Catholics making up about 25 percent of the 2,300-member congregation.

Perry’s role also has changed. In 1997, Arthur Caliandro, then-senior minister, dreamt of having a full-time Biblical scholar, both for his congregation and for people in their places of business, throughout the city. Perry gave up high-school teaching and joined Marble full time, offering several on-site classes throughout the week, as well as noontime classes in rented spots around Manhattan.

Today, people around the world view her 10 a.m. Sunday Bible study class, live through the church’s website. A gifted storyteller, she makes the Bible’s ancient people seem like relatives remembered from childhood.

“They’re our ancestors,” she said.

Perry said these Bible classes are one reason Marble draws so many Catholics, either to join the church or just to partake of the studies.

“People are hungry for it,” she said. “It’s the greatest book ever written, a roadmap of life and adventure. Every soap opera ever written is in Genesis. These are real people.”

She does not, however, read the Bible literally.

“We read nothing literally except the stock market report. That comes from fear. The Bible wasn’t written in English. We’ve translated it through the years,” Perry said.

The meanings of words change as culture changes, she said, explaining that the word abomination in Hebrew means “a custom that foreigners have that we don’t.”

“That’s not what it means in English. Tattoos at that time were tied into the worship of pagan deities. That’s not true in 21st-century New York. You have to be careful with literal versus real.”

Perry said another draw to Marble for Catholics is what attracted her as well – the welcoming spirit of Marble’s ministers, staff and congregation.

“I’ve found from them the most incredible Christian welcome. It’s so special. For Catholics, we think we have the truth and that is sufficient, but it isn’t because the truth is filtered through people,” she said.

She sees issues of women, the laity and homosexuality as ones that still need addressing in many Catholic churches. She feels the same kind of hope in Pope Francis that sprang up after the second Vatican Council.

Marble addresses these issues by supporting groups for women, men, committed couples, people in the arts and its LGBT members. The latter puts it most directly in opposition to Catholic teaching. Marble is quite open in its embrace, setting up a water table under its banner outside the church on Fifth Avenue every June for the Gay Pride Parade. Perry supports this fully, calling equality “the last civil right.”

“I’ve done research on the Biblical texts used to condemn homosexuality, and there is not a single Biblical text that has validity today that supports an anti-gay stance,” she said. “Marble helped me to see the gay and lesbian community with a human face. They were people in my classes, members of the community, some of them the most ardent practicing Christians.”

She remembers preaching to the newly formed group in the 1990s, when it was just 52 gay men, in this particular instance.

“It was one of the most profound religious experiences of my life,” she said. “They were professional men sharing who they were by birth, over which they had no choice, and their intense desire to live Christian lives. It was a total eye-opener to me.”

More people will get to know Perry through her first book, Waiting for Our Souls to Catch Up, published as an eBook by Asahina and Wallace this month. It’s about the challenge of having a spiritual journey in a technological world.

“I feel like Grandma Moses starting something new,” she said.

Being open to new experiences has been a part of her life since childhood, when her closest friends included a Jew, a Lutheran and a member of the Greek Orthodox church. Her father, who had just begun operating his own funeral directing business, died unexpectedly at the age of 30, when Perry was a baby. Perry’s mother raised her and her older brother. Their mother sold the business and went to work in a clothing factory. The two children shared the chores of washing the dishes and cleaning the ashes out of the furnace.

“In a sense I was a liberated woman without knowing it,” she said, adding that is probably what attracted her to the Sisters of St. Ursula, which she describes as a 400-year-old community that never had a cloister or wore habits, and which was dedicated to the education of women.

“They had a spirit of openness and revolution,” she said. “They were always out there. What could be better than to join them?”

She lives now in an apartment with another sister, and is an active member of St. Colman’s in East Kingston, serving as a lector on Saturday evenings. Tuesday and Wednesday nights she spends in the city with other sisters. She sees no separation between her Catholic life and her Marble life.

“They blend together,” she said. “They’re God’s world and there’s wealth in both. I consider myself one of the richest women in the world.”

When asked what the most important thing she has learned from the Bible is, she readily said, “God loves us, as amazing as that is. God cares about us and God forgives us. From the earliest books of the Bible that forgiveness is prominent. One of the biggest lessons is we’re not to fear God.”

And that’s the message she’s heard preached at Marble for more than three decades.

“It’s not a negative pulpit. We Christians can be hard on ourselves, parsing sin. That’s not what life is about. It’s received love.”

[Retta Blaney is the author of Working on the Inside: The Spiritual Life Through the Eyes of Actors, which features interviews with Kristin Chenoweth, Edward Herrmann, Liam Neeson, Phylicia Rashad, Vanessa Williams and many others. She is a grateful member of the Marble family.] 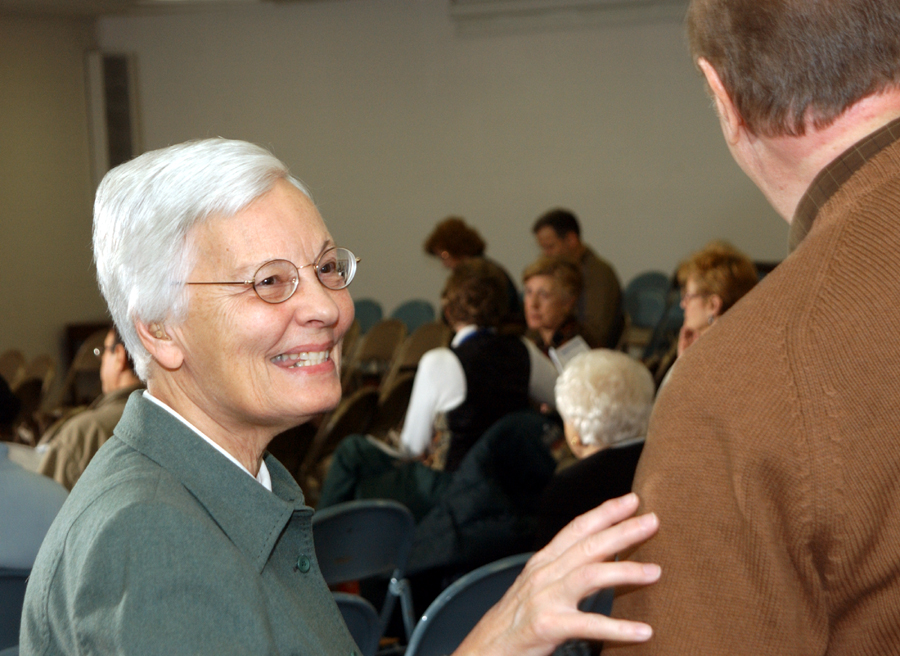 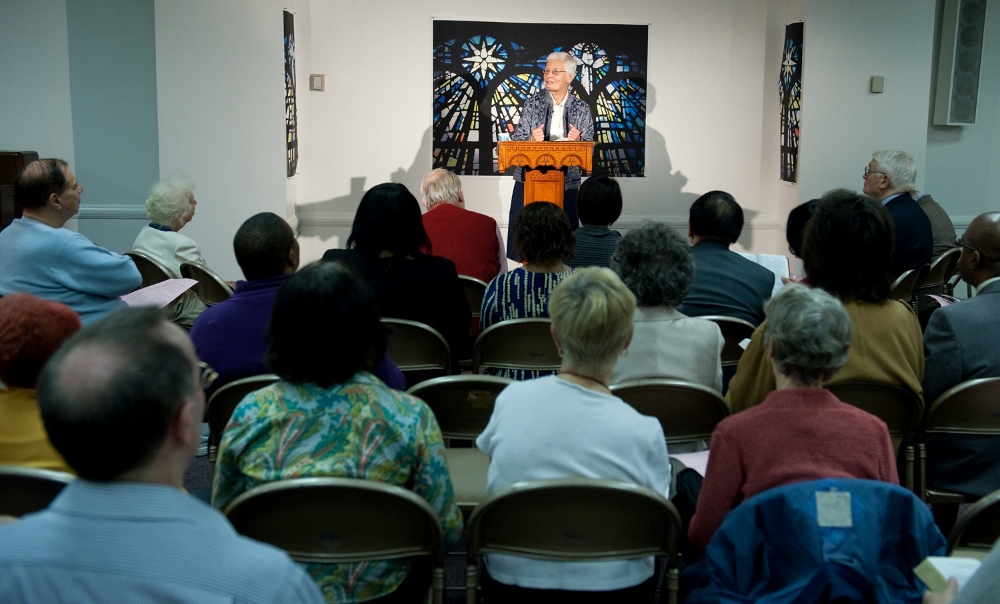