Sr. Gabriela Cuéllar Durán and four sisters live and work in Cochabamba, Bolivia, a city of one-half million people. Members of the Sisters of St. Joseph of Chambéry, which began its Bolivian ministry in 1981, the five Cochabamba sisters whose ages cross four generations, live and work in one of the poorest sections in Cochabamba in one of the poorest countries in South America. True to their 17th-century foundation in France, Sisters of St. Joseph are “compelled to live and work with the common people, sharing their struggles and their hopes,” serving the “dear neighbor.”

From their 70-year-old home, Cochabamba sisters start their days early, often working late into the evening. Durán and her community live in the southern zone of the city serving the families of peasants and former miners who no longer have work in the silver mines around Potosi and Lake Titicaca. Almost 500 years of over-mining has created massive sink holes and environmental destruction in a country that had some of the richest silver mines in the world. Once towering over 15,600 feet, Cerra Rico, the proud mountain symbol on the Bolivian flag, now stands in a state of collapse, an ever-present danger to miners still working at the site. The miners refer to it as “the mountain that eats men.”

The sisters know the history but now must deal with the ever-present reality of relocated, struggling families with limited utilities, sanitation, food, and education. Duran teaches and helps administer a school with more than 900 students, pre-K through secondary. Also working at the school, Sr. Madina Moroña Suarez teaches secondary students and provides support services for the students and their families.

Besides the basic academic courses, the school provides education in music and Bolivian history and culture, raising awareness of environmental issues such as recycling, deforestation and preserving Mother Earth. Begun by a local parish priest, the school was named by parents to honor a celebrated Bolivian sculptor, Marina Núñez del Prado. The sisters, parish and parents struggle to keep the school solvent as it grows in numbers.

Nothing is easy, as this school struggles to survive economically and provide basic education to the miners’ children. Some teachers drive hours to teach their classes each day and volunteers help staff the school. Every 15 days, trucks from the center of the city make the steep climb to fill the school’s water cistern. At times the children bring bottled water from home to keep the school’s small orchard alive, walking miles carrying water in their backpacks.

Durán says their students lack economic resources, which “obliges them to look for additional support through temporary part-time jobs such as tailoring clothes, backpacks, shoes, and hats.” Also, adolescent girls work with their mothers selling in the markets while adolescent boys try to pick up day-labor jobs to help the family make ends meet in small homes that sleep five to seven in a room at night. Many fathers are forced to look for jobs miles or countries away from their families, and the stress of poverty makes domestic violence an ever-present reality, according to the sisters.

The winding, narrow road that climbs to the miners’ homes is not for the faint of heart, but Sr. Zelinda Rosin commandeers her five-speed, standard-transmission SUV with expert skills and a fearless spirit. Rosin oversees the six comedores (small dining halls) for the children of the miners. They feed about 450 children each day. Women in the parish and mothers of the children are given money to buy food for the week, and in small, sparse kitchens they work their magic with large metal pots and long-handled stirring spoons. Other women make fresh bread and create a high-protein soy, corn or barley milk for the children each day.

The cost is divided between St. John the Baptist Parish and the parents, who pay what they can; that usually amounts to about one dollar a week per student. Rosin talked about the importance of parents helping to share the financial burden even with very limited incomes.

“This gives them some sense of dignity and self-esteem by helping to pay their children’s way,” she said.

Sr. Ericka Rodriguez Salvatierra leaves early in the morning and returns late at night to attend classes for a physical therapy certificate and to learn English. Youngest of the sisters, she works daily to master the proclivities of the language while serving as the community’s communication liaison. Aided by her computer and social media skills, Salvatierra provides an important role for her community, linking them to the 11 other sisters in Bolivia and to the global network of the Sisters of St. Joseph. Earlier in her life she had been taught by St. Joseph sisters who ministered in the El Beni area of Bolivia where she grew up. It was from this early association that she knew she wanted to be a sister and work alongside her mentors.

Well into her eighth decade, Sr. Natalicia Zago participates in parish work but also serves as caretaker for the flowers, garden and small animals that cover the sisters’ large open courtyards. Originally from Brazil, she delights with her gardening and landscaping as she makes her rounds talking to and caring for animals and plants with kind eyes, a gentle demeanor and a soft, lilting voice. Watching her tend to plants and the small animals in the sisters’ yard, you get the feeling that there is a level of communication present that only she and the natural world around her understand.

Amid the grim realities of life in Cochabamba, these five sisters minister to the needy. Their days are long, often supplemented with providing liturgy, music and parish education at night and on weekends.

Twenty years ago, the sisters and the city gained a powerful symbol for the religious faithful. Visited by hundreds of pilgrims daily, some who climb the 2,000 steps to the 133-foot statue, Cristo de la Concordia (Christ of Peace) stands atop San Pedro Hill with hands raised over Cochabamba, watching silently and protectively, as if blessing a busy but difficult existence in the valley below. The Bolivian Sisters of St. Joseph understand this and labor within the city, doing their part to make lives better for the “dear neighbor.”

[Carol K. Coburn is Professor of Religious Studies and Women and Gender Studies at Avila University in Kansas City, Mo.] 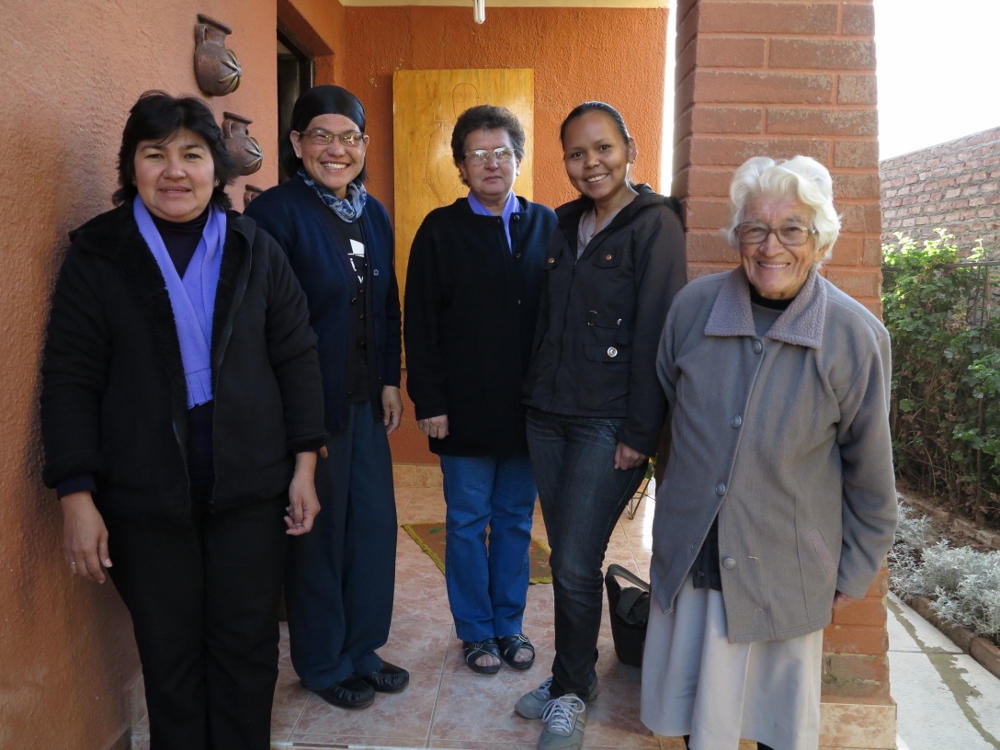