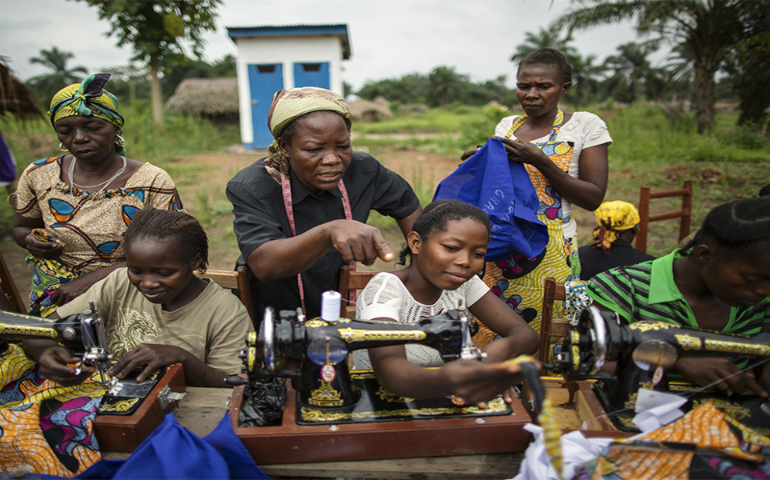 Sister Angélique Namaika, standing, in black, assists women with the clothes they are making at the Maison de La Femme in the town of Dungu, Orientale Province, Democratic Republic of Congo, on Aug. 1, 2013. (UN Refugee Agency/Brian Sokol)

Nairobi, Kenya — Roman Catholic sisters in the Democratic Republic of Congo are coming under increased attacks as vandals destroy churches and convents in an attempt to frustrate the church's efforts to act as mediator in an election dispute.

The spreading violence has forced some of the sisters to close their convents and cease working in the communities they serve.

In the eastern city of Bukavu, the Daughters of the Resurrection, an order of African sisters, closed seven convents after the killing of several sisters. A Franciscan sister, Marie-Claire Kahambu, was stabbed to death in December.

"When sisters are being attacked and terrorized, it is the universal church which is being targeted," said the Rev. Chrisantus Ndaga, deputy secretary-general of the Association of Member Episcopal Conferences in Eastern Africa. "We strongly condemn this violence and urge those perpetrating it to cease it immediately."

Last week, Carmelite sisters in Kananga, in the central province of Lulua, were terrorized when a nearby church seminary was set on fire.

Last week's attack followed an earlier one on Feb.12 in Limete, west of Kinshasa, in which an estimated 20 youths attempted to torch St. Dominic’s Church. They overturned the tabernacle, ransacked the altar and smashed some church benches.

The attacks are being viewed as a backlash after the Catholic Church helped broker a deal Dec. 31 in which President Joseph Kabila was to step down after elections this year.

An election dispute over another term for Kabila had threatened to push the country into anarchy.