• See the social media compilation of the kick-off on Storify 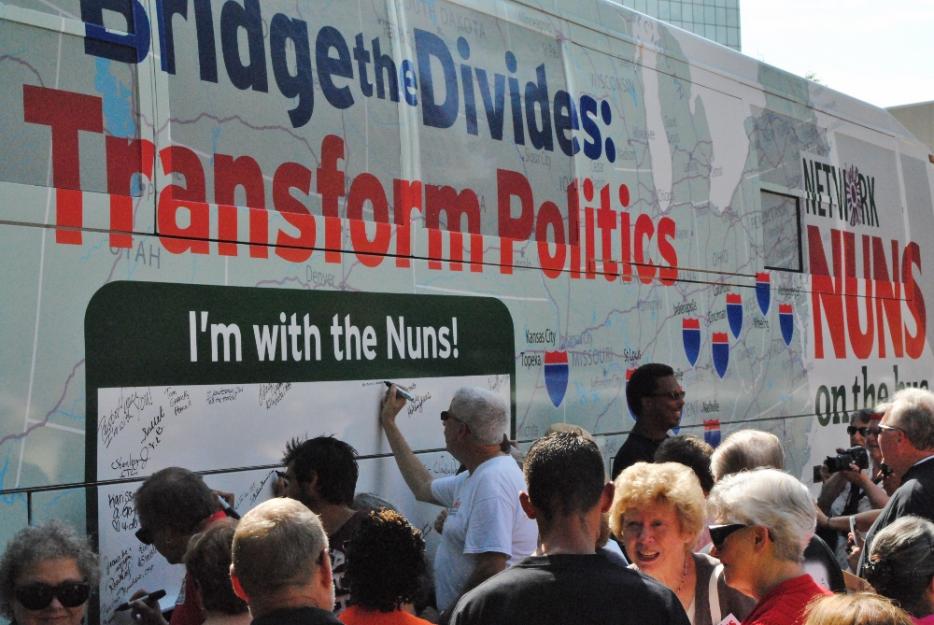 After the inaugural rally to begin the 2015 Nuns on the Bus tour, people were invited to sign their names in support of its goals. (GSR photo / Dawn Cherie Arajuo)

St. Louis, Missouri — As Social Service Sr. Simone Campbell and the Nuns on the Bus tour bus rolled onto St. Louis' Kiener Plaza on Thursday, a crowd of about 70 people — many women religious — began to cheer. The cheers continued as Campbell emerged from the bus to kick off the 2015 tour, the latest iteration of what has become Campbell's annual tradition of traveling the country talking to people.

"What a treat it is to be here in St. Louis with our very subtle bus," she joked when she reached the microphone. But then her tone turned serious as she described St. Louis as a symbol of both the darkness and the light of the United States.

From where she stood on the plaza, Campbell explained, she could see both the St. Louis Arch, which she called a gateway to the American dream, and the courthouse where the Missouri Supreme Court ruled in 1852 that blacks were not and could not be citizens of the United States.

"We are a nation of both hope and trouble," Campbell said.

She then turned the microphone over to six St. Louis residents, who briefly shared what they saw as the major issues facing their city. There was a clear theme: economic justice.

Mike Breiham, president of the local Amalgamated Transit Union, spoke about fair wages and the need for effective unions, as did Elinor Simmons, a home health care worker, and Julian Long of Adjunct Action. Terri McAllister of Missouri Health Care for All spoke about poverty and the high cost of health care in state that opted not to expand Medicaid.

Naomi Carranza, who identified herself as an undocumented immigrant, spoke about the benefits and pitfalls of the Deferred Action for Childhood Arrivals, which protects certain people from deportation for renewable periods of two years, but does not provide legal status. She said under the consideration she is able to go to college, but she said she pays double the tuition and is not eligible for federal financial aid.

Campbell said Nuns on the Bus chose St. Louis as the first stop of the tour for all of these reasons, but also because of St. Louis' proximity to Ferguson, Missouri — the city where a white police officer shot and killed 18-year-old Michael Brown in 2014. For the first time, race is a predominant theme of the Nuns on the Bus tour. 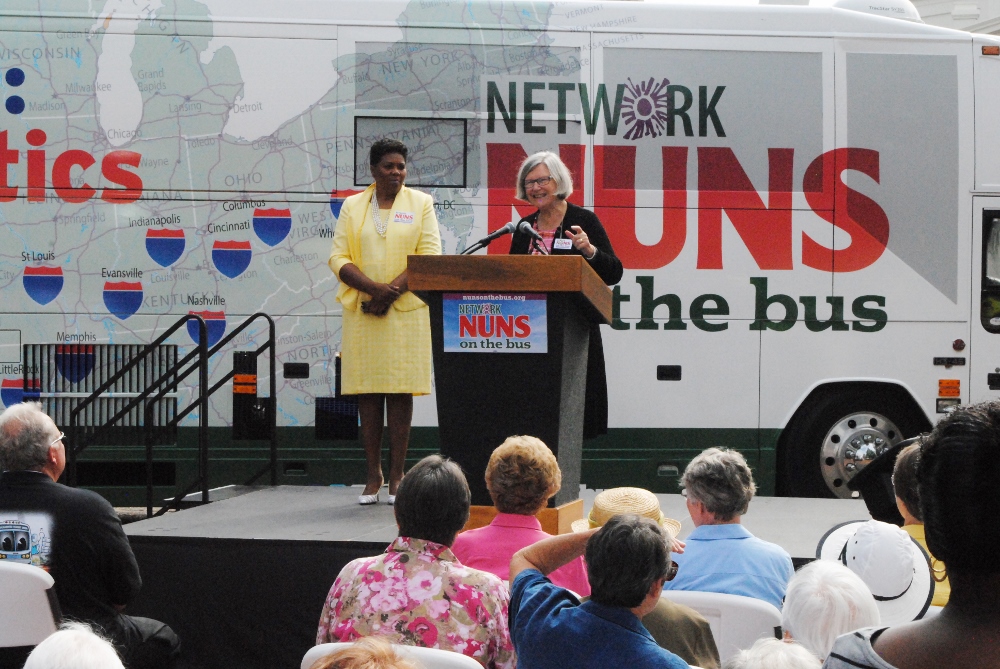 Rev, Traci Blackmon, left, was one of the St. Louis-area residents to address the crowd at the rally Sept. 10. (GSR photo / Dawn Cherie Araujo) 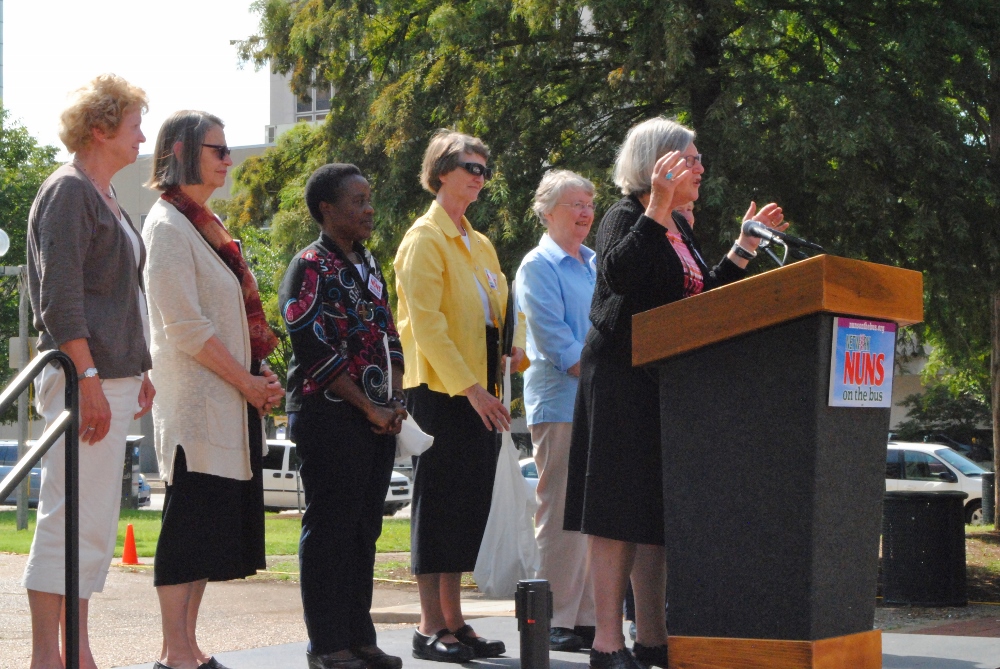 "Having the anguish of the last few months with police violence and the violence in our cities — we've got to stop it," Campbell told Global Sisters Report. "One of the biggest divides we have to bridge is the chasm of racism. And I know my white skin puts me in places where other people can't go. But I want to use my white skin so we bridge divides, not create them."

Rev. Traci Blackmon, pastor of Christ the King United Church of Christ in Florissant, Missouri, and member of the Ferguson Commission, opened the kickoff rally with a prayer and message of encouragement for the sisters who would be on the bus. In her public address, she spoke about the unique role love plays in healing all of the nation's pains, but when she talked to GSR, she focused on race.

"My heart was warmed to see that race was not a missing factor in this tour," she said. "And that's one of the critical issues that we're dealing with. Race is too often the missing factor, but until this nation deals with race, we're always going to have economic disparity; we will always have this tension that underlies everything that we do. Because this nation is fertilized with the blood of slaves."

Thursday afternoon, the Nuns on the Bus tour will talk to black mothers at a St. Louis YMCA about raising children in the post-Ferguson world. Thursday night, Campbell will also host a town hall meeting, where she will hear more about the issues facing St. Louis residents. She plans to present the stories she hears throughout the tour to Congress at the end of the month.

The bus will be in Kansas City, Missouri, on Friday for a rally and a town hall meeting before heading to Kansas and Arkansas. The tour winds through five more states before culminating in Washington, D.C., with a rally on Sept. 22. 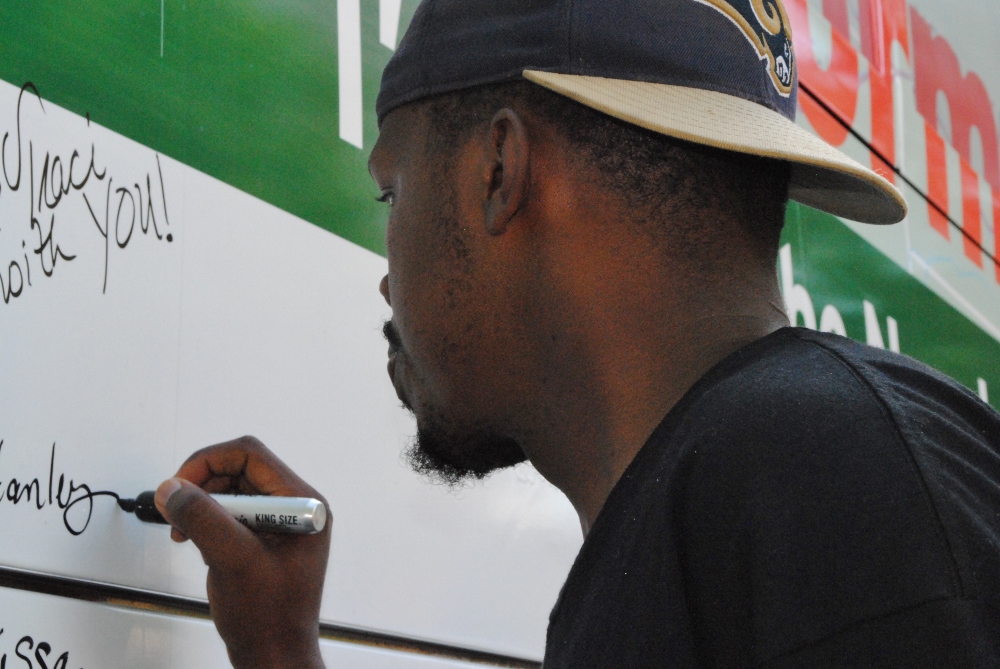 A man adds his name to the Nuns on the Bus bus in support of the sisters. (GSR photo / Dawn Cherie Araujo)

[Dawn Cherie Araujo is staff writer for Global Sisters Report based in Kansas City, Missouri. Follow her on Twitter @dawn_cherie.]