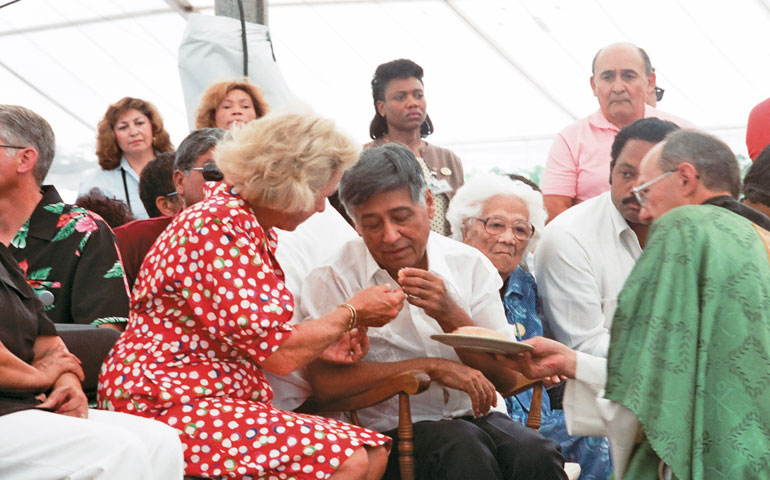 Editor’s note: Pacatte's story appears on NCRonline.org and in The National Catholic Reporter.
Global Sisters Report is pleased to host this essay, which she wrote especially for our launch.

If you ask director and filmmaker Richard Ray Perez if the story of Cesar Chavez chose him or if he chose to tell Chavez's story, he would say both.

Following the screening of his new film, "Cesar's Last Fast," at the Los Angeles Religious Education Congress Film Showcase March 14, he told the audience that when he was 5 years old in the late 1960s, he first became aware of the table grape boycott while eating lunch at Head Start.

Perez came from a family of migrant workers, but it was a college student who one day began to pick out the grapes in the fruit cocktail. When the children asked, "Why?" the student explained that the people who worked to pick the grapes were treated very badly, so he was not going to eat what hurt people. Perez said that the fruit became very ugly to him and his classmates. They all began to pluck them out.

Years later, he became interested in making a film about Chavez, but other people were already in the process of doing so. One day, he received a call from Lorena Parlee (1945-2006), who had been Chavez's press secretary during his 36-day fast in 1988. Parlee said she was looking for a collaborator. She was undergoing treatment for breast cancer and could only work two days a week. Perez was interested but needed six months to complete another project first. "Call me if you don't find someone by then," he told her.

Several months had passed when a family member called to tell Perez that Parlee had died of breast cancer and had left a note that her family should contact him to complete the documentary. The film premiered this past January at the Sundance Film Festival.

"Cesar's Last Fast" is a moving account of the life and spirit of Chavez (1927-93), who, along with Dolores Huerta and others, founded the United Farm Workers union in California in 1962. The film frames Chavez's life story with the 36 days of his water-only fast during the summer of 1988 to protest the use of pesticides. He was 60 years old at the time.

This was not Cesar's first fast. His 1968 fast is also well-documented. It showed union members and farm laborers that nonviolence was the way to create the changes needed to achieve the humanitarian treatment of farmworkers and their families -- meaning fair wages, clean water, education, medical care and housing. 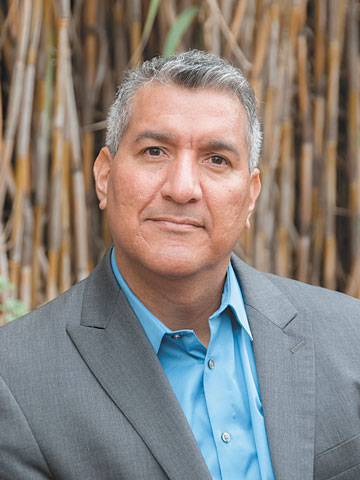 Fasting is the key thread throughout the film. Chavez's use of fasting as a spiritual practice to effect social change is unbelievably powerful to watch and understand. As Catholic Christians, fasting is perhaps a marginalized aspect of our spiritual practices, reserved for Ash Wednesday and Good Friday. The film has a way of honoring the practice of fasting for one's own spiritual benefit, to effect change, and to show strength of soul when perseverance and goodness are required. My view of fasting has been changed forever.

The strikes; police brutality, including two killings of farmworkers; and the success of a 400-mile Holy Week pilgrimage to Sacramento, Calif., in 1966 that got the first farm grower to make a contract with the union (179 growers followed) are some of the most moving sequences I have ever seen in a documentary. Perez's nonlinear editing and storytelling style make the film compelling. It moves in concentric circles, using Cesar's last fast as the touch point to return to all that came before and all that followed.

A union member built a shrine to Our Lady of Guadalupe in the back of a station wagon, and its role as a gathering place in the fields for devotions and the celebration of Mass was key to gaining the trust of farmworkers and convincing them to leave behind so much to go on strike. The celebration of Mass plays a key role in the story of the United Farm Workers, and "Cesar's Last Fast" reminds us of this.

The Chavez story is not all roses. After the groundswell of support for the farmworkers in the 1960s and '70s, and early successes with contracts and table grape and lettuce boycotts, things got tough within the union when it was officially organized. Chavez called in management experts whose tactics went against the heart and humor that characterized the early days. Gilbert Padilla, who had worked with the union from the beginning and ran the credit union, was asked to resign at the experts' suggestion. Chavez accepted his resignation. They never spoke again.

Actor Martin Sheen is seen in some of the footage, but he also comments, as do Huerta, Chavez's brother Richard and his son Paul.

Sheen, who was present at Cesar's last fast, says, "Something sacred was going on, something powerful, spiritual and dangerous."

"Cesar's Last Fast" is honest, important and prophetic. The conditions of farmworkers, who carry out the most necessary yet grueling and oppressive work on earth, have not changed very much since the 1960s. Workers are still afraid to stop to drink or use the bathroom, knowing they can be replaced if they fall behind. Though some pesticides were outlawed in California in the '80s, the state does not enforce anti-pesticide laws and the situation still exists in all the states that have not outlawed them.

Participant Media bought the distribution rights for "Cesar's Last Fast," which opened in theaters on April 18 in New York and will open Friday in Los Angeles. Catholics in Media Associates in Los Angeles plans to give Perez its CIMA Documentary Award at the organization's annual event June 1 in Los Angeles.

Nuns on the Bus 2018 travelogue: When constituents gather, politicians listen