Drums punctuated a silent march by almost 800 Catholic women religious leaders Aug. 10 as they processed two blocks from a hotel ballroom to the Old Courthouse in downtown St. Louis, the site of the first two trials of the historic Dred Scott case.

This call to action at the general assembly for the Leadership Conference of Women Religious emphasized the conference's recommitment to a 2016 resolution that recognized "racism as a systemic, structural cause underlying and contributing to the multiple situations of injustice identified in the LCWR Call."

"In the presence of constant and painful reminders of the deep roots of racism in our country," reads the 2018 statement of recommitment, which echoes the wording of the 2016 resolution, LCWR pledges "to go deeper into the critical work of creating communion, examining the root causes of injustice and our own complicity, and purging ourselves, our communities, and our country of the sin of racism and its destructive effects."

The conference unanimously affirmed the recommitment just before marching to the courthouse, which was blocks away from the hotel where the sisters convened Aug. 8-10 for the LCWR annual assembly.

In the 1857 Dred Scott decision, the U.S. Supreme Court ruled that no African-American, free or slave, could claim U.S. citizenship and was therefore unqualified to petition for freedom in court. Opposition to the decision was a catalyst for the Civil War and led to the adoption of the 13th, 14th and 15th amendments to the Constitution.

Sisters held signs on the courthouse steps that read "Being in Communion, Standing Against Racism," a continuation of the 2018 assembly's theme, "Being the Presence of Love: The Power of Communion."

"As we gather here today, let us recall that it has been 50 years since the great civil rights leader and man of God, the Rev. Martin Luther King Jr. ... was gunned down in Memphis," Sr. Donna Gribschaw, a Sister of Divine Providence of Allison Park, Pennsylvania, and chair of LCWR's Global Concerns Committee*, said to the assembly participants before marching.

"And still we are confronted today with the sin of racism and the persistence of white privilege," she added. "In our work, the Global Concerns Committee recalled the desire expressed by members for additional time to go deeper and to deal more fully with the systemic racism that afflicts our country and our communities."

"Recent events in our nation, including the rise of white supremacy, growing nationalism and xenophobia, and our own failure to deal effectively with persistent systemic racism have heightened our concern and our desire to address racism as a root cause of injustice," Gribschaw said. "And finally, we heard the deepening desire among you, the members, to address our own complicity in this enduring evil."

Following a recommitment to the 2016 resolution — calling sisters to confront systemic racism, acknowledge their complicity, & commit to creating deeper communion — sisters at #LCWR2018 led a silent march to the Dred Scott courthouse.

“Why a silent march?” pic.twitter.com/cIb8KyEKyH

A central part of the 2016 LCWR assembly focused on addressing institutionalized racism in women religious congregations and featured the work of historian and professor Shannen Dee Williams. Since then, several congregations invited Williams to address them individually. Some communities sought out black women who were discriminated against to apologize. Sr. Mary Pellegrino, a Sister of St. Joseph of Baden and former LCWR president, in her presidential address to the 2017 LCWR assembly and in interviews discussed steps her community has taken to face historical incidents of racism.

The call to action also fell days before the anniversary of an Aug. 12, 2017, rally in Charlottesville, Virginia, in which white nationalists carried torches and yelled racial slurs, causing riots that eventually led to the death of a woman.

"The sin of racism and the injustice it breeds ultimately deprives all of us of the ability to be at home, to know peace," Sr. Danielle Bonetti, a Sister of St. Joseph of Carondelet and member of the Global Concerns Committee, told the assembly before the march. "As protestors have reminded us, those still burdened by the legacy of slavery know in a deep and visceral way what it feels like to be aliens in their own city, to see their lives given little account. Yes, we need to pray today for the gift of peace, a gift that God yearns to give us. But we must heed to God's challenge to build justice."

Following their recommitment to the 2016 resolution, sisters petitioned for those who struggle for civil rights, economic injustice and the limitations of prejudice based on race, nationality or sex.

"We stand in communion," the conference responded.

"That we may have the courage to make a personal and communal commitment to abolish social structures that inhibit economic, educational and social justice," they petitioned.

"We stand in communion."

"[To] strengthen our resolve to give witness to this resolution by the way we live and act. May we have a change of heart ... We stand in communion."

A drum circle, which Bonetti said was incorporated for its "time-honored method of healing and restoring energy," accompanied the sisters across the street as they gave "silent witness to God's call to end racism."

Bonetti affirmed the call to action before the conference, asking, "Why a silent march?

"To publicly ask for forgiveness for all the ways in which we have been complicit in supporting racism. To stand in communion with our sisters and brothers who continue to be denied their basic rights as human beings. To thank those who have gone before us and those who today work to eliminate all forms of injustice."

*A previous version of this story had an incorrect name and congregation. 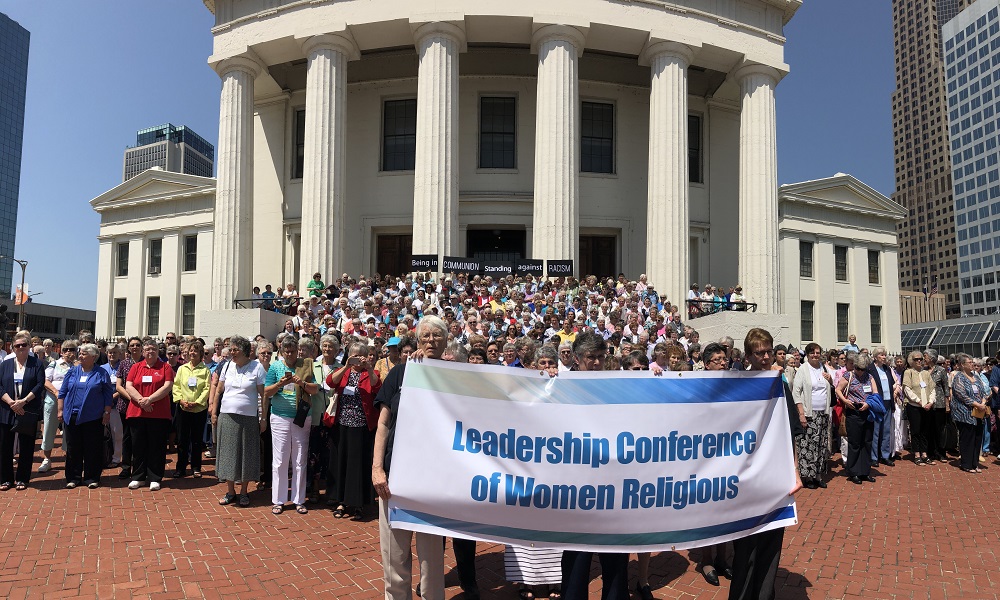 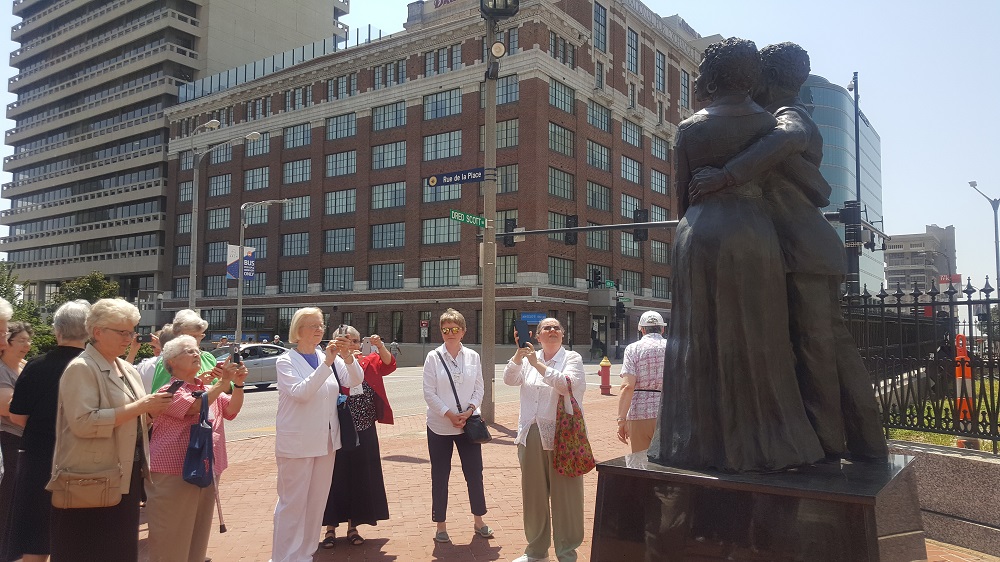