Mary of Magdala proclaims the Resurrection at Manhattan church 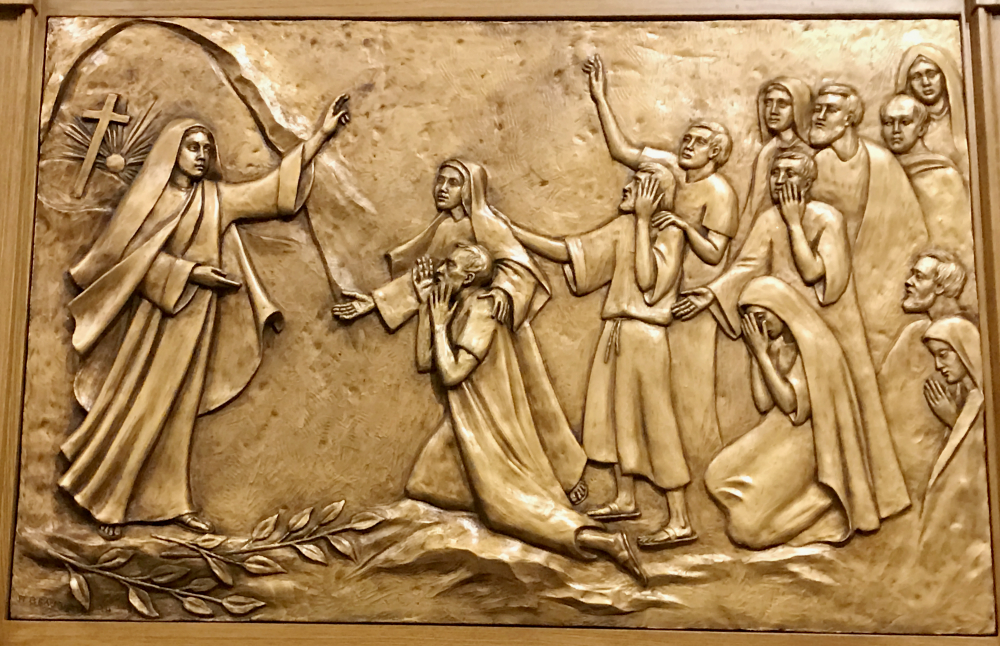 A bronze relief created Charity Sr. Margaret Beaudette depicts St. Mary of Magdala preaching. The relief was unveiled at the Church of the Ascension in Manhattan, New York, on April 22. (Patricia Lefevere)

New York, N.Y. — Parishioners filled the Church of the Ascension on Manhattan's Upper West Side on April 22 to honor St. Mary of Magdala, the subject of the church's newest work of art: a bronze relief of Mary preaching.

Hundreds of parishioners from the parish's diverse congregation turned out for the festive 5:30 p.m. liturgy, which had a Gospel reading and homily by pastor Fr. Daniel Kearney that told the story of how Mary of Magdala was first to proclaim that Jesus had risen from the dead. The parishioners who heard this good news stayed after the Mass for the unveiling, blessing and dedication of a bronze relief of Mary of Magdala proclaiming the Resurrection.

Kearney said the parish chose to honor Mary of Magdala during Eastertide rather than wait until her declared feast day, July 22, because she had every reason to be celebrated during the joyous Easter season.

The bronze artwork with its painted resin, measuring 36 inches by 24 inches, is situated near a side exit of the church, just below a statue of the Pietà, which sits above the exit door. Created by Charity Sr. Margaret Beaudette, the bronze panel invites conversation.

Modern-day viewers unused to seeing women proclaiming — especially women in antiquity — could be forgiven for thinking that Mary is teaching. Standing at an opening of a cave or tomb-like enclosure, she raises her left hand in greeting; her right hand is at rest near her waist.

From the faces of the 12 onlookers in the relief — seven men and five women — Mary of Magdala may well be telling them, "Fear not." Their countenances are a mix of trembling, awe, surprise and grief. Among those hearing her proclamation are an astonished Simon Peter and his wife, who comforts him, aware no doubt that he is sorrowing for having denied his Lord on the night of his agony.

Behind the kneeling Peter are James and John, the sons of Salome. Behind them is Mary of Jerusalem, who hosted early church gatherings in her upper room. Her son, John Mark, and nephew, Barnabas, stand in front of Zacchaeus and the Samaritan woman.

Kneeling in the lower right of the relief panel are Mary of Bethany, who prophetically anointed Jesus before his death; her sister, Martha, who declared Jesus to be the Christ; and their brother, Lazarus, all dear friends of the risen Lord. 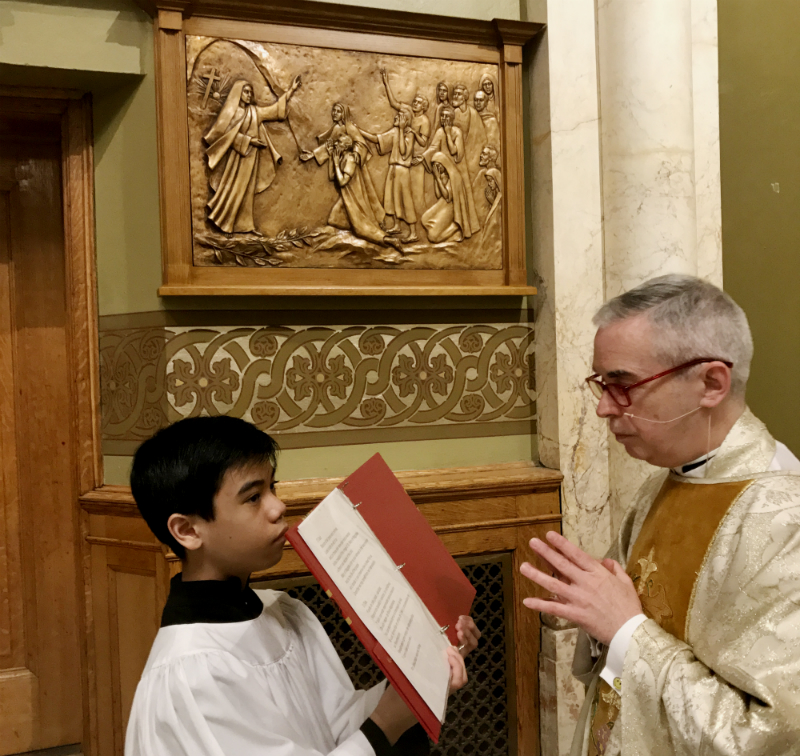 Fr. Daniel Kearney, pastor of the Church of the Ascension in Manhattan, New York, blesses a bronze relief by Charity Sr. Margaret Beaudette at the relief's unveiling April 22. (Patricia Lefevere)

Beaudette, who created the sculpture in 2014 and who died on March 12 at age 89, just weeks before the unveiling, was a teacher for some 30 of her 70 years as a Sister of Charity of New York. Having taught elementary, high school and college-age students over the decades, she had a fine sense of the variety of viewers who would see such a prominent artwork in a busy city parish.

"These are the disciples I imagined ran to hear Mary of Magdala first proclaim the Good News," she said in writing about this relief.

But who is this Mary standing in front of a dozen puzzled companions? Is she the repentant prostitute? The woman healed of seven demons? The voluptuous woman evoking the dangers of female sexuality? All these images are variants of the "mistaken identity" Mary of Magdala has acquired through the ages, said Sr. Mary Boys, a Sister of the Holy Names of Jesus and Mary.

Boys took to Ascension's pulpit after the unveiling of the relief and Kearney's blessing to talk about Mary by her first title: "apostle to the apostles." Boys' remarks were also given in Spanish following the bilingual English-Spanish liturgy.

"To restore Mary to her rightful place, we need to begin with what the Gospels say of her," Boys said, pointing to Luke 8:1-3, which tells of Jesus' driving seven demons out of Mary.

Boys, the dean of academic affairs and a professor of practical theology at Union Theological Seminary in the City of New York, noted that the Gospels don't reveal what "possessed" Mary, "but their sevenfold nature suggests a disturbance not easily dislodged," perhaps something like depression, she said.

She said Mary's healing did not occur in an instant, but more likely over time as Jesus worked with her, "drew from her whatever had kept her from living into her full humanity." 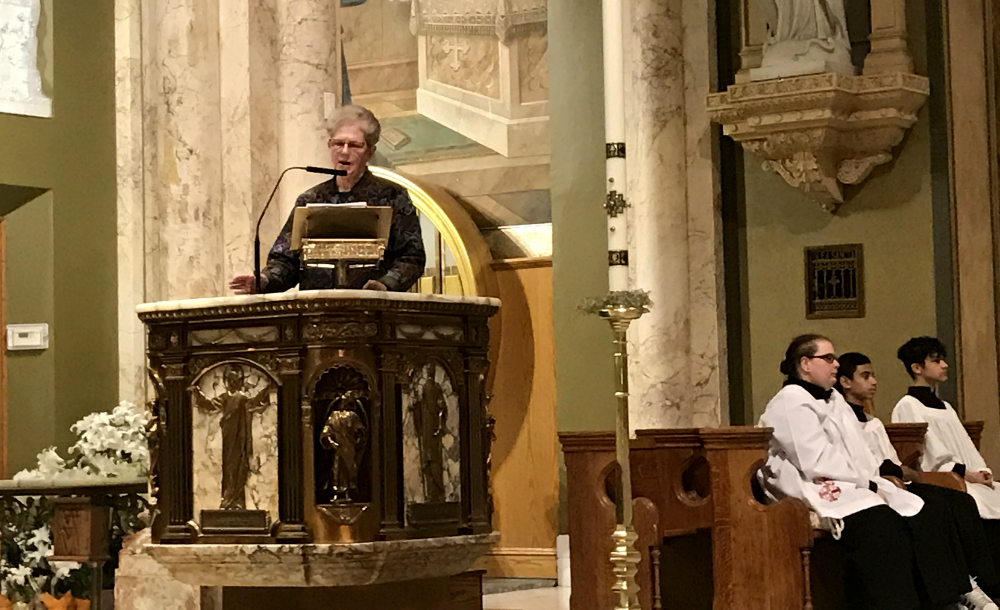 Sr. Mary Boys, a Sister of the Holy Names of Jesus and Mary, talks about Mary of Magdala from the pulpit of Ascension Church after the unveiling of the bronze relief April 22. (Patricia Lefevere)

A second text important in the restoration of Mary to her rightful place is John 20:1-18, Boys said. This passage and all four Gospels attest that Mary of Magdala was at the Crucifixion and Resurrection. Moreover, John's account demonstrates that Jesus sent Mary to bear witness to the other disciples.

"He makes her an apostle," she said.

Boys said the church failed to teach about this Mary Magdalene, the one who needs to be reclaimed from the John and Luke texts, who deserves "her rightful place as the 'Apostle to the Apostles,' " as leader in the early community of Jesus' followers, and "as a wounded healer who bore witness to the power of the Spirit."

She said the church's labeling of Mary as a repentant prostitute and its repression of her role as apostle had its origin in the Gospel of Mary, a text from the late second or early third century that did not make it into the church's biblical canon. Citing a passage from that gospel, Boys said Peter took umbrage at the idea of Jesus speaking in private to a woman without the other apostles knowing about it.

"Are we to turn around and listen to her? Did he choose her over us?" Boys said.

For Boys — an expert on Jewish-Christian theology and author of nine books and scores of published articles — the evening of festivities that followed the unveiling of Beaudette's relief was not an occasion "to dwell on the misogyny that so afflicts our church," she said. Nor was it a time for sorrow over Mary's mistaken identity and "what the church has lost over the ages by its repression of women's leadership."

Rather, she said, it was an evening to gaze at a piece of art that cannot imagine the church's apostles without women alongside men. 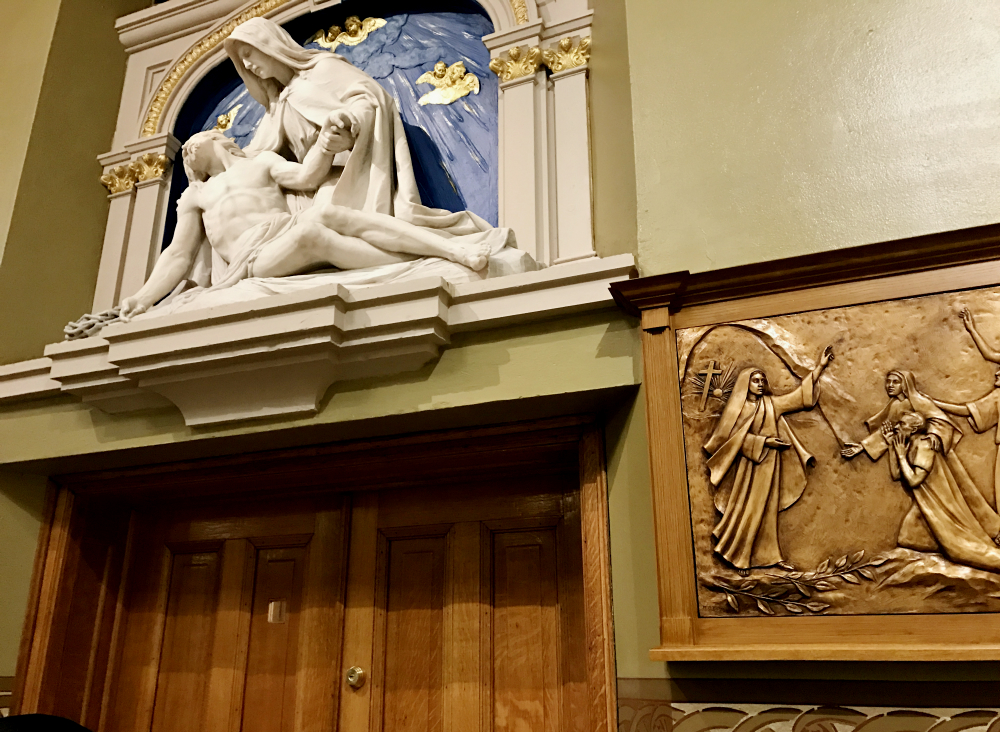 A statue of the Pietà is seen above Charity Sr. Margaret Beaudette's bronze relief at the Church of the Ascension in Manhattan, New York. (Patricia Lefevere)

For the last 30 years, Beaudette devoted herself full-time to fashioning saints out of clay, then had them cast into bronze, bonded bronze, or fiberglass at DePaul Sculpture Studio on the grounds of the College of Mount St. Vincent in the Bronx, according to her website.

Over the years, she created a kind of menagerie of holy personages. Among her favorite commissions were those of Sts. Angela Merici, Augustine, Bernadette, Francis of Assisi, Joan of Arc, Joseph, Kateri Tekakwitha, Paul the apostle, Peter the fisherman, and Elizabeth Ann Seton, an American saint and the founder of the Sisters of Charity.

Beaudette's community and former students and art colleagues remember her for her sculptures and her vision.

"My sculpture was the best way I could express that God, ever compassionate and kind, is incarnated in the figures I sculpt," she said.

Beaudette's works are on view on the campus of Mount St. Vincent as well as at St. John's University in Jamaica, New York; at the College of St. Elizabeth in Convent Station, New Jersey; and at parishes in New York and New Mexico. They are also displayed in schools, hospitals, chapels and shrines in Bermuda, Canada, France, Haiti and South Korea, where some of the nun's more than 60 works have found a home.

Her last commissioned piece was made for the 200th anniversary of the Sisters of Charity of New York and will be part of a shrine to St. Elizabeth Seton to be installed at St. Patrick's Cathedral here on Oct. 8.

[Patricia Lefevere is a longtime contributor to the National Catholic Reporter.]

The black Catholic nun every American should know