Editor's note: This story has been updated at 9:05 a.m. CDT Oct. 9 with information about the Oct. 8 stop at Homeboy Industries.

Overlooking the sandy beaches of Santa Monica, the 2018 Nuns on the Bus set off for Mar-a-Lago on Florida's southeast coast Oct. 8 — from "sea to shining sea," said Social Service Sr. Simone Campbell, executive director of Network, a Catholic social justice lobby, which sponsors the bus tour.

After five annual trips starting in 2012, Nuns on the Bus put their bus in park in 2017 to spend time lobbying in Washington, D.C., to stop the Trump administration's new tax policy. Now they're back and more motivated than ever, Campbell said.

"The fact that we lost on tax policy, I guess some people could say I'm a sore loser," Campbell said with a laugh.

The kickoff event for the Nuns on the Bus' 2018 tour, "On the Road to Mar-a-Lago: Telling the Truth about Tax Policy," was held in Los Angeles before a stop at Homeboy Industries and a town hall later in the day.

Network believes tax expenditures should be focused on "strengthening the social fabric of our society and creating strong communities," according to its website.

"The tax policy is such bad policy for 95 percent of the people in our nation," Campbell said. "We thought, 'We just have to keep going at this. This is not over.' "

That's why Nuns on the Bus will be traveling to 21 states, hosting 54 events over the course of 27 days. The bus will end with a "Fiesta for the Common Good" near Mar-a-Lago, Trump's national golf club in West Palm Beach, Florida, on Nov. 2, four days ahead of the 2018 midterm elections.

During the trip, Campbell said, they'll be holding town halls to raise awareness and start conversations about the tax overhaul. She said California, Pennsylvania, Massachusetts, New York and New Jersey are generally the most adversely impacted by the tax policy, but not everyone in those states knows that.

"The biases of the Republicans in Congress really penalize those five states because high local taxes are no longer deductible," she said. "And a lot of people don't understand this, so we thought we ought to speak out about this."

But it's also extremely important to the sisters to listen to people's stories and go to organizations that are making a difference in people's lives, Campbell said.

"We can all talk, and it's so staggering to hear the statistics," said Nancy Pelosi, House Minority Leader and a Democrat representing California's 12th District, at the kickoff event. "But nothing is more eloquent than the stories of the families themselves."

Pelosi said that's why the Nuns on the Bus tour is so important.

"They really do make a difference," she said. "When the Nuns on the Bus hit the road, our hopes are riding on them."

Although this bus tour specifically focuses on tax policy, the previous themes, such as economic justice and Medicaid expansion, are just as relevant, Campbell said.

During the kickoff event, Angela Eilers and her 9-year-old daughter, Myka, from Little Lobbyists told their story about Myka's heart condition and the fear of losing health care coverage because of having a pre-existing condition.

"I'm just like everyone else," Myka told the crowd. "Except I have a special heart."

It's stories like these that will forever have a special place in Campbell's heart.

"I still remember stories vividly from each and every bus trip," Campbell said. "It's really a powerful, exciting thing."

"It's those kind of stories." Campbell said. "It's why we go on the road."

She doesn't know what stories they'll hear this year, but their first stop, Homeboy Industries, has five people who will showcase exactly how far they've come with the help of the nonprofit that helps formerly gang-involved and previously incarcerated men and women.

"We live in such a polarizing time," Alison Lass, Global Homeboy Network and media relations manager, told Global Sisters Report. "If we can show the work that we do and show the people that come through our doors what they experience and the change they make in their life, I think it's just a really important thing."

She said Homeboy Industries has already been working on many of the issues the Nuns on the Bus tour will be talking about. For example, every Friday, Homeboy Industries sets up a voter registration table up in the lobby. They hope, just like the sisters, to get everyone talking.

During the Nuns on the Bus stop at Homeboy Industries later in the day, the sisters made cookies in the bakery and heard stories from people like George Nunez, who grew up surrounded by gang life and went to prison when he was in his early teens.

"I didn't have [positive] role models in my life," Nunez said.

It wasn't until his son asked him, "Are you ever going to love us again?" that he knew he had to make changes in his life — and it started at Homeboy Industries.

Campbell said she was surprised to learn Homeboy Industries only uses 9 percent government funding. Recently, she said, some of that money was cut, which led to layoffs.

"The current administration would rather ship money to the top 1 percent," Campbell said. "That's wrong. We're better than that as a nation."

Reflecting on the first two stops of the trip, Campbell said she was amazed at the turnout, adding that she met two women, one with a walker, who drove seven hours to see them.

But Campbell said she hopes people in the cities where the bus stops take something away from visiting with the sisters, too.

One of those things she hopes people understand is that the tax law is projected to increase the national debt by $1.9 trillion between 2018 and 2028, according to a report by the Congressional Budget Office.

"They don't know how huge this hole we're building is," she said. "It's just wrong."

Before the sisters travel from "sea to shining sea," there was a lot of work put into first deciding to even do the tour. But they knew something had to happen.

"It's such an amazing platform, and it takes us to so many communities," Campbell said. "Lightning rarely strikes twice in the same place, so we shouldn't try to create something new."

Then they started planning — everything from the small details to practicing their town halls.

The bus hasn't been to Los Angeles since its immigration tour in 2013. Campbell said it's good to be back, and they'll be "collecting" three new states — Nevada, Nebraska and Delaware — this year.

"The real work is along the route, educating the people to what's going on," she said.

But, she said, it's the perfect image to be ending at Mar-a-Lago: After Trump signed the Republican tax overhaul in December, he left to spend Christmas at the club.

Campbell said they'll be tweeting at Trump, inviting him to play golf with some of the sisters. A few of the sisters on the bus do play golf, she said, but should the president take them up on the offer, they'd be more focused on talking tax policy.

She said she isn't sure Trump will even respond to them, but that's not the main focus. She wants people to simply start talking about the tax policy and then stand up and say, "No, this is not who we are."

She doesn't expect change to happen immediately, she said, but she hopes November's newly elected members of Congress commit to changing the tax policy.

"That's what we call winning," she said, adding it doesn't hurt that the sisters will also hopefully be bringing people a little extra joy at a time when it's so needed.

[Heather Adams is a freelance writer based in Los Angeles.] 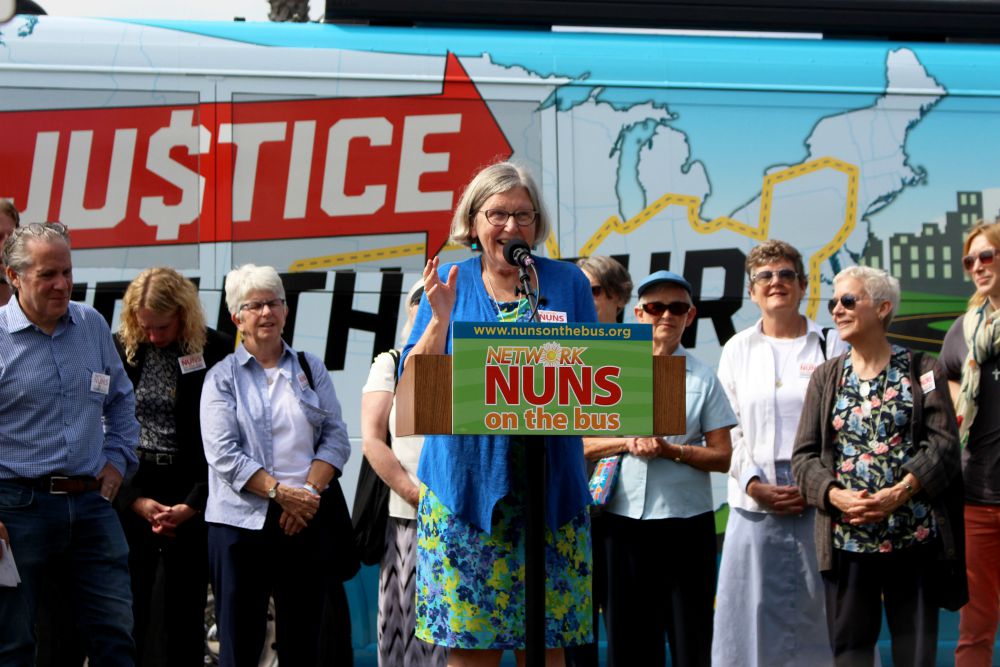 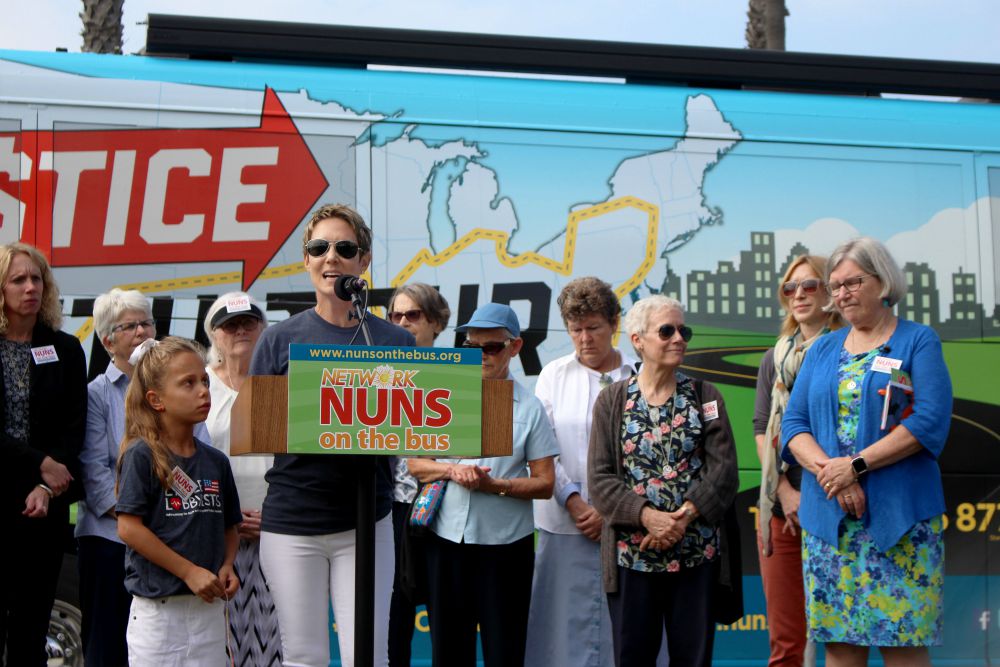 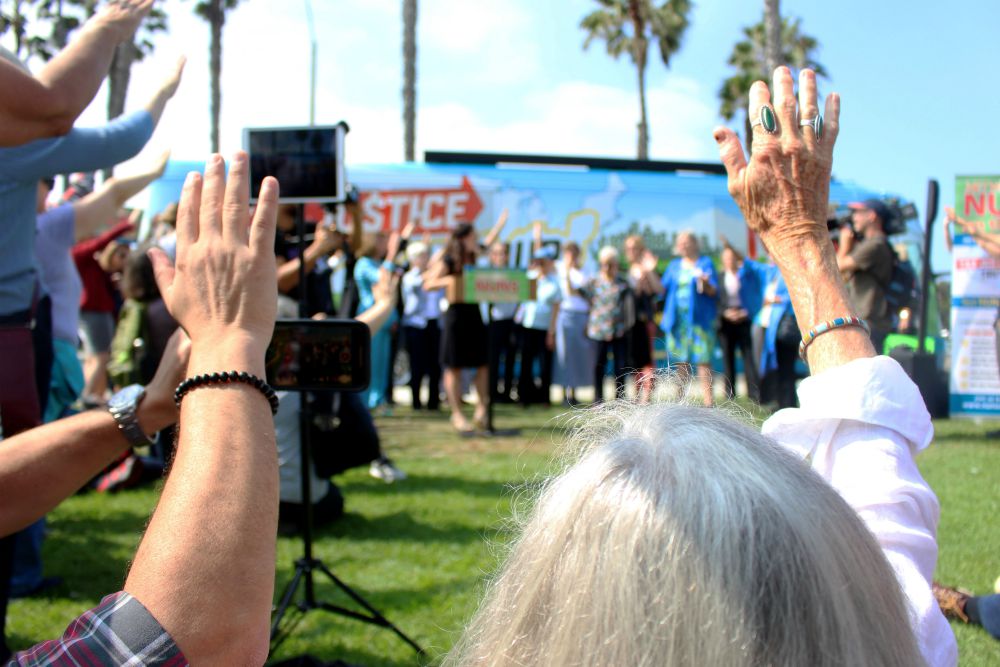 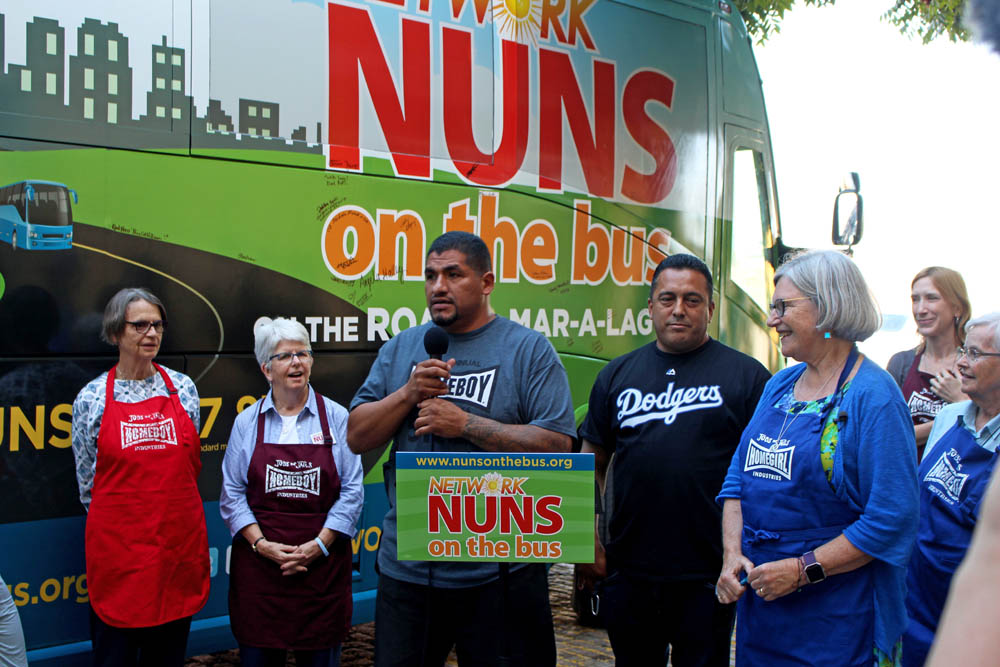 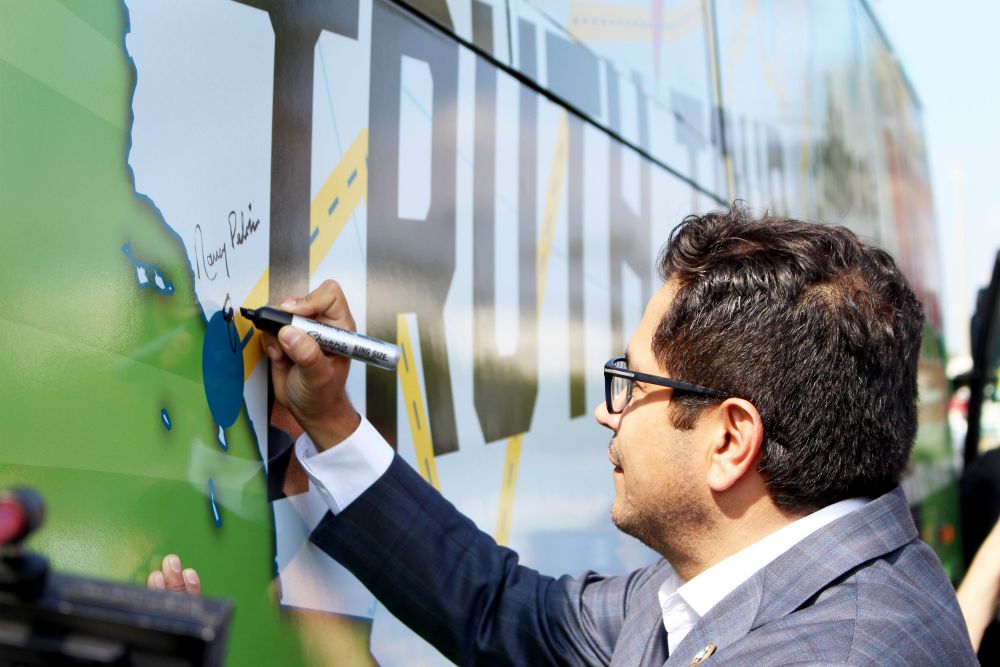