• Camp Suzanne, so children can visit their moms in prison 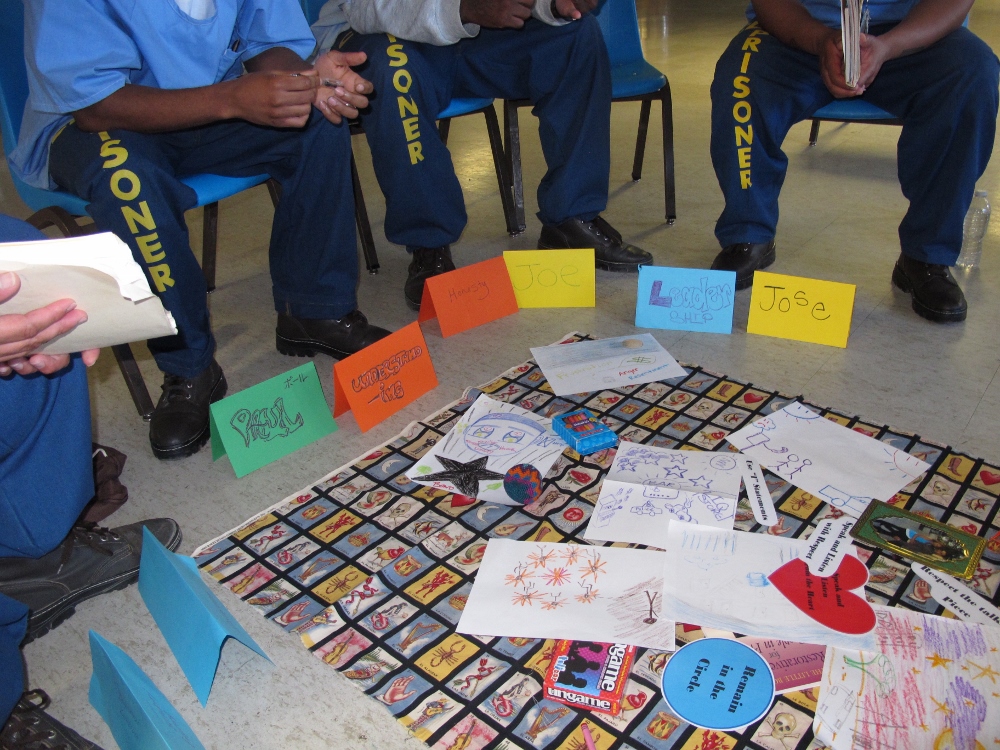 Oakland, California — Timon* is serving time in a California state prison for a murder he committed when he was 17, but he said his crime didn't start when he was a teenager.

Things began when he was a child, forming ideas about the world, he said. Timon grew up in public housing, with a single mom and without a "sound" male role model.

"I had to figure out things in life from what I had to work with," he said.

Timon, now 43, has been in prison for 23 years. He delved into examination of himself as part of the restorative justice programs at the state prison. (Because of the sensitive nature of the program, Global Sisters Report is not using the name of the institution.) There, he's become a workshop leader, helping others heal from their traumas and make amends for their crimes.

Restorative justice is a theory of justice that aims to restore the relationship between the offender and the victim of the crime, in order to heal both parties and the community. In its purest form, it is a victim-offender dialogue: The victim of a crime meets the perpetrator and they talk, ideally proffering healing to both parties.

At the Insight Prison Project of California, these dialogues are always victim-initiated — legally, prisoners can't contact their victims — and are facilitated by highly trained mediators who prepare both parties extensively for the conversation.

"There are lots and lots of studies that prove that this is one of the most healing opportunities for victims because they actually get to have a voice in their own justice," said Billie Mizell, executive director of the Insight Prison Project.

Normally, in the courtroom, perpetrator and victim are removed from each other, Mizell said. The victims play no role in what, if anything, they want in terms of punishment or what they need for their own healing.

"It's the state's interests that are considered," Mizell said.

Similarly, the criminal-justice system encourages a denial of accountability from perpetrators, who often plead "not guilty."

Research supports the benefits for victims as well as prisoners who take part in restorative-justice-based programming. Recidivism rates are dramatically reduced, meaning fewer participating prisoners come back to prison once they leave.

Many programs implement elements of the victim-offender dialogue, including developing accountability, taking responsibility for one's actions, developing empathy, and healing trauma. These programs are often labeled as restorative-justice programs, even though they veer from the technical definition of the process.

"What is restorative justice?" Timon asked an audience of 30 other prisoners circling him in an August session.

"Restore and bring back together," one said.

"Making amends with families of victims," another shouted.

"Giving back to the community," another said.

"To get to this place here, we had to walk a terrible beat," Timon told other prisoners in a smaller group later. But "the only thing I can't heal from is the thing I can't confess."

Gabriel* is another prisoner at the state prison; having committed murder, he asked rhetorically, "What punishment is adequate?"

"I can never give that life back, but helping other people change is the only thing I can do," he continued. 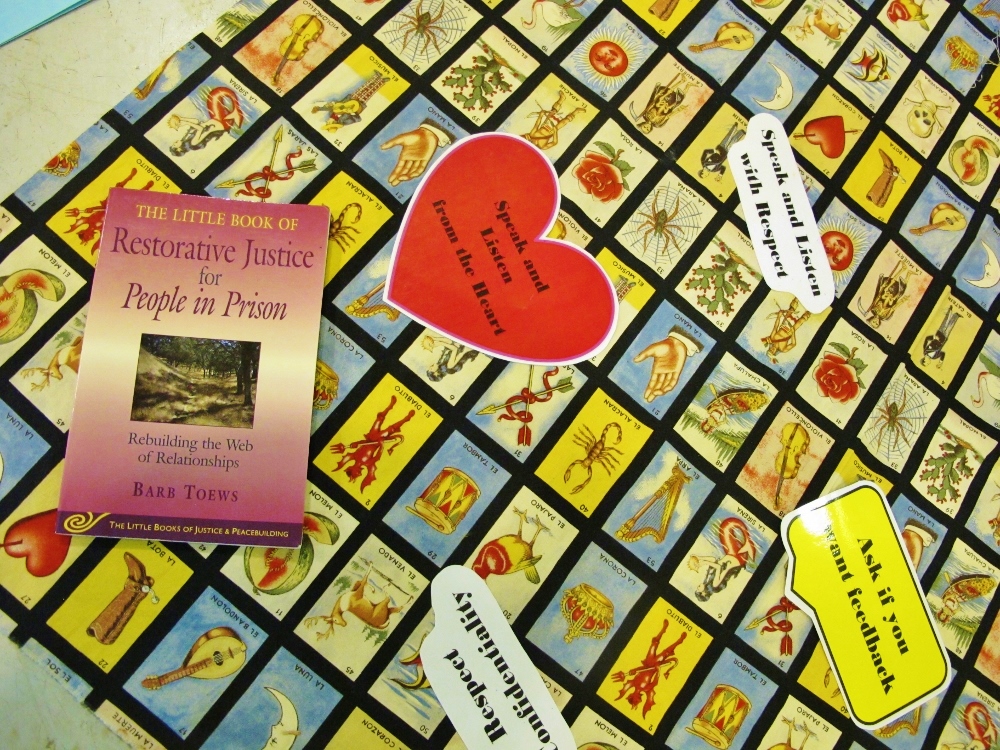 After years of work in the prison's parenting class and restorative-justice classes, Gabriel has accepted himself as he is, taken responsibility for his crimes, and taken steps to help others as a way to contribute positively to the world.

"We all have a nurturing spirit," he said, and he's learned to foster his.

"To ignore the path that sent them to prisons, to ignore that timeline, is not a way to end crime," Mizell said.

"They've been taught so much from parents or grandparents that live in the same cycle of violence," said St. Joseph Sr. Theresa Harpin, executive director of Restorative Partners, an organization that implements restorative-justice programs in northern California.

The vast majority of perpetrators are also victims, said Mizell, who notes that there is usually the additional trauma of poverty. In order to take responsibility for their crimes and to put wrongs right, perpetrators must first understand themselves and heal through activities in restorative-justice programs, she said.

Because programs address often-repressed trauma in the lives of prisoners, many new programs sprout from issues unearthed in this emotional excavation, Mizell said.

Prisoners "often tell us what they need next, and we should listen to them because they know better than we do," Mizell said.

Prisoner requests led the Insight Prison Project to initiate groups for LGBT awareness, for veterans and for prisoners who went to jail as teenagers.

For instances in which a direct meeting between perpetrator and victim isn't possible, many programs develop empathy and an understanding of crimes in other ways.

For example, in Restorative Partners' Alternatives to Violence Workshops, people in jail role-play scenarios from their own lives. Harpin said this allows prisoners to examine the dynamics of relationships and to develop compassion and empathy, "one of the elements that is often sorely missed in this population" but that is a skill Harpin said can be developed intentionally.

The Insight Prison Project's Victim Offender Education Group brings in panels of people who have survived crimes similar to those the offenders have committed. The survivors share the effect of those crimes on their lives.

This is "the single most impactful process for transforming harmful behavior," Mizell said.

Once incarcerated participants have processed their own trauma and they're confronted with the effects of their criminal behavior, "suddenly, there's an awakening that happens," Mizell said.

This type of experience is useful for the prisoners and restorative for the victims sharing their stories.

"There was another level of healing that happened, sitting with men who had committed murder and looking at the hard work of introspection that they've done," said one woman who shared the story of her husband's murder with the Insight Prison Project.

Catholic Charities of the East Bay includes programs that support families who have had a loved one murdered. Dominican Sr. Marian Castelluccio, the program's clinical supervisor in the Mental Health Department, often visits these families herself.

One of the key elements to supporting these victims, Castelluccio said, is not saying, "I understand."

"I have no idea how you're surviving," she said she tells people. "I can't even begin to comprehend the pain that causes for you, but . . . I'll companion you until you tell me not to come anymore."

In addition to victim-support services, Catholic Charities of the East Bay also has programs that serve students. Through this, the group disrupts the "school-to-prisons pipeline," a phrase that refers to a system "wherein children are funneled out of public schools and into the juvenile and criminal justice systems," according to the American Civil Liberties Union.

Catholic Charities of the East Bay works with schools to train them in restorative-justice practices. All staff members of participating schools are trained in the process together, Castelluccio said.

Staff members are trained on how to approach different students. For example, instead of looking at the child and saying, "What is wrong with you?" staff members learn to say, "Tell me what's happening in your life." If a student says that a family member was killed recently, for example, staff members can "immediately wrap that kid with resources," Castelluccio said. 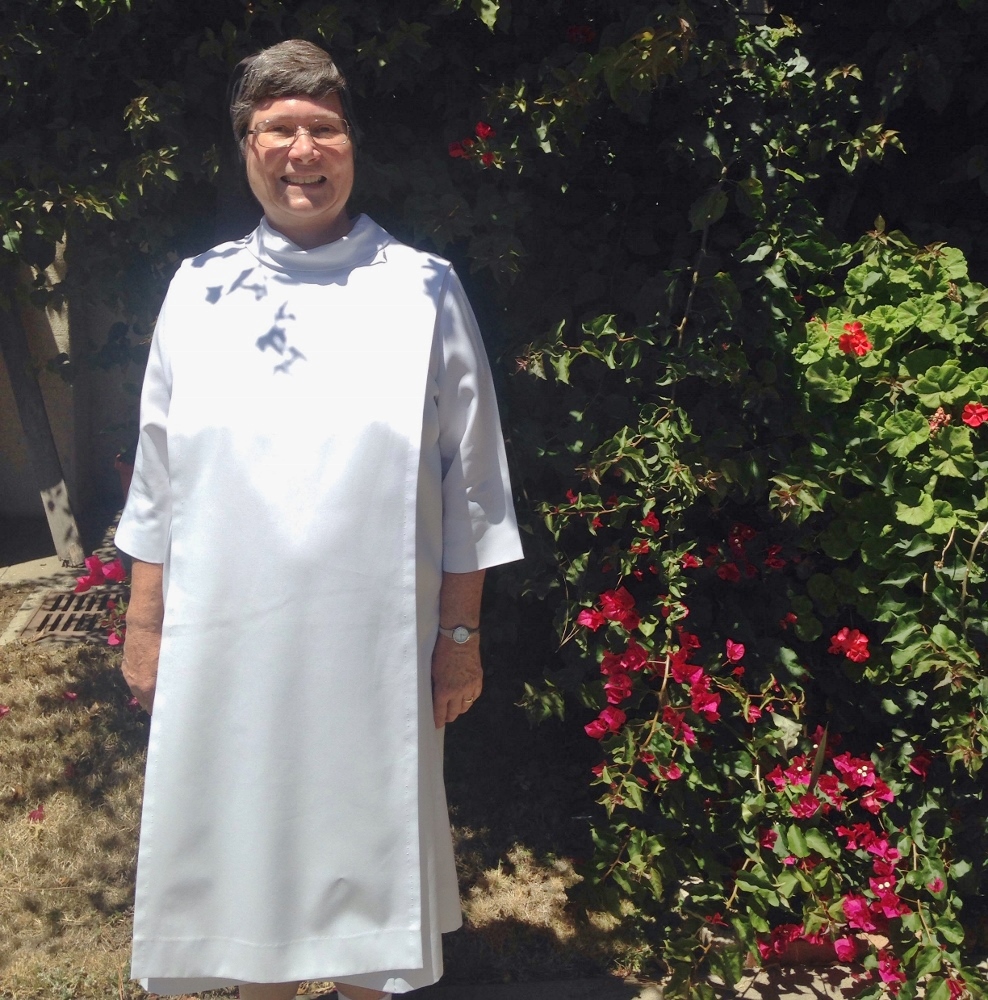 Comunidad San Dimas, a Christian organization offering restorative-justice workshops and education in the San Francisco Bay Area, also has programming surrounding young people who have entered juvenile hall. Dominican Sr. Suzanne Marie Prows, who works for Comunidad San Dimas, visits youth in the programs, especially those who don't have families who visit during designated times. She plays games with them, and she said they are thrilled to have someone to interact with.

"Sometimes they're in their rooms for 23 hours a day because they don't have school," she said.

When the young people are released from juvenile hall, Comunidad San Dimas supports a number of them financially so they can go to high school thanks to a grant from the San Rafael Dominicans. Students check in monthly to offer updates on their education. The money can go to books, rent, utility bills, or other pragmatic purchases. The organization also supports a few students entering college. Education itself reduces recidivism by over 40 percent.

Gabriel, the inmate at a California state prison, said after all the programs he's attended in his 27 years in prison, he's "stepping into his greatness," a phrase others have used.

His work as a facilitator in prison — a "legit job" — has given him purpose, he said, partially because "educated people saw value in me." He said he has seen fellow prisoners have emotional breakthroughs during workshops he facilitated, something he called "drop-the-mic moments" in which he felt he mattered. Outside facilitators have talked about hiring him to lead programming when he gets out in as few as two years. His life has purpose, and he sees opportunities to give back to his community.

The U.S. criminal justice system is based on a punitive model, not a restorative one. Mizell said the United States is focused on punishing the over 2.3 million adults and over 34,000 youth incarcerated in the United States, and "that just hasn't worked."

"You have to believe, in this work, that people can change, that there's a basic goodness in all people and that we're all created by God," Prows said.

*Names of inmates have been changed.

Related - Camp Suzanne, so children can visit their moms in prison

My true journey: I am doing a year of service, and I have depression

Sisters try to find hope in the phrase 'President-elect Trump'