The Catholic sisters who took part in Pope Francis' summit on clergy sexual abuse say they hope the presence of a dozen women at the gathering sets a standard for a growing presence of women at Vatican meetings of bishops.

"We would like to think that this is how things will be in the future," Maltese Sr. Carmen Sammut, one of the women invited to attend the Feb. 21-24 summit on child protection, said at a Feb. 25 briefing. While three women religious participated in the 2018 Synod of Bishops, 10 attended the summit.

"We hope that this is an example of what will happen in the future, that we will have more say, more places in synods and other big meetings at the Vatican," Sammut said.

Murray, UISG's executive director, said the group represents about 1,900 religious congregations around the world that consist of more than 600,000 women.

"We had an important role to play [at the summit], representing the women religious of the world and also taking on the responsibility that we have for running so many institutions, projects and programs," Murray said.

Openibo, who in a speech to the summit Feb. 23 addressed what she called a culture of "mediocrity, hypocrisy and complacency" that led to the abuse scandals, said she hopes in the future, more laywomen "might also be added so that the church's voice, including women, would be there."

"I hope our brothers have listened, have seen the difference, and they will make the changes," she said.

The 10 sisters who took part in the Vatican summit are all members of UISG's executive board. Two laywomen also participated: Gabriella Gambino and Linda Ghisoni, both under-secretaries for the Vatican's Dicastery for Laity, Family and Life.

The primary participants of the 190-person meeting were the presidents of the world's Catholic bishops' conferences, the heads of the Eastern-rite Catholic Churches, and the cardinals and bishops leading Vatican offices.

Sammut, who has led UISG since 2013, noted in the briefing that in addition to inviting more women religious to the summit than the 2018 synod, the organizers also allowed the union to choose who would represent them.

At the synod, she said, the union was given three slots and "conditions of how to fill them up." The three women religious who took part did so as participants and not full members, meaning they could not vote on the gathering's final document.

"We see that there's a development in the right way, so we do hope that one day, we will get there, that we can be equal members with the men religious ... who have voting rights," Sammut said. "We don't know when this will happen, but we really think that it will happen."

Hornamann said one bishop who was part of her small discussion group at the summit told her, "I thought you had voting rights. I didn't know that you have no voting rights in synods."

"We still have a long way to go," she added.

According to "Episcopalis Communio," the new constitution governing the synod that Francis signed in September, the organization that represents men religious around the world has the right to elect members to synods, but UISG does not.

The document states, however, that "according to the theme and circumstances, others who are not honored with episcopal duties can be called to the synod assembly with a role to be determined by the Roman pontiff."

Asked about Francis' unscripted Feb. 22 comments during the summit, in which he referred to the "feminine genius" and the church being a woman, Openibo mentioned the pope's Argentine-Italian background.

"You have to also acknowledge that he's taking steps," she said. "Maybe the words he uses are different from what some of us would like to hear, but let's hope with him, changes are taking place."

Openibo also shared a joke someone made in her small language group after she gave her own address to the summit.

"I was told I was now the third cardinal in the group," she said. 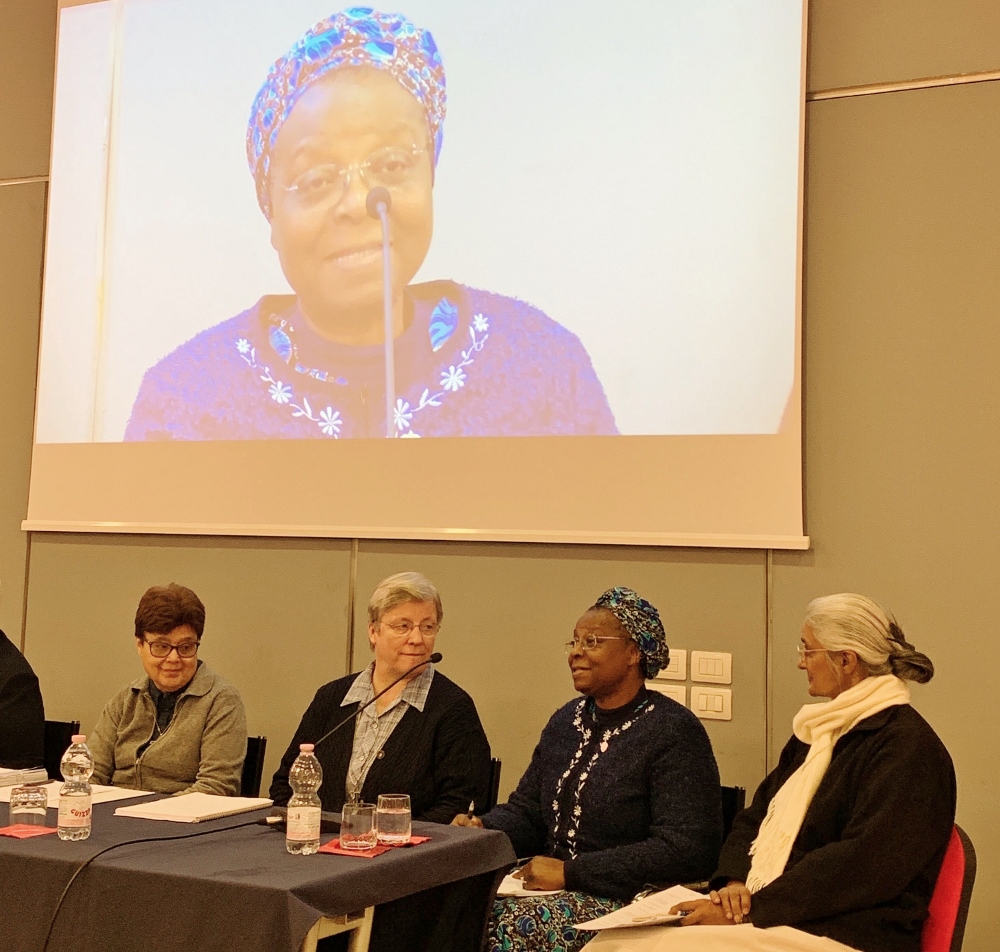