by Brian Roewe
Social Justice
This article appears in the Nuns on the Bus feature series. View the full series. 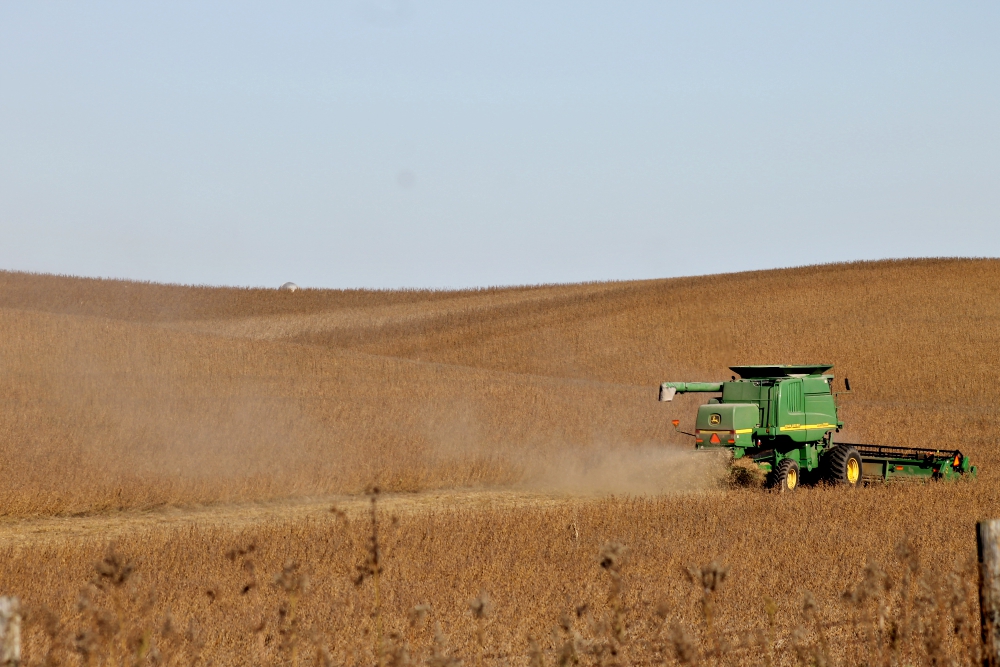 A combine harvests a soybean field Oct. 18 outside Dyersville, Iowa. Soybeans are one of the commodities hit with a tariff from China as part of its ongoing trade dispute with the U.S. (NCR photo/Brian Roewe)

Dyersville, Iowa — October opened with heavy rains and oversaturated farm fields in this part of northeastern Iowa. Those conditions slowed the fall harvest to a standstill for many farmers, including Dave and Sherry Kronlage.

Typically, the Kronlages, who alone manage their 550-acre family farm where they grow corn and soybeans and raise 6,000 hogs annually, would have harvested about half of their crop by mid-October; by that point this year, about more than three-fourths remained in the fields.

"We're behind this year," he said.

But weather is only one worry for the Kronlages' bottom line.

Farmers in Iowa and other agriculture-heavy states continue to anxiously wait out the trade dispute between the U.S. and China. Beginning in March, the two nations have traded a series of tariffs, with President Donald Trump slapping the import taxes on Chinese steel and aluminum and China responding with duties of its own on more than 120 U.S. products, including pork, ethanol and soybeans.

The trade tit-for-tat has caught Iowa in the middle. In 2017, the state was the country's leading producer of corn and pork and second in soybeans, according to the U.S. Department of Agriculture Economic Research Service, with China alone accounting for 60 percent of all U.S. soybean exports (valued at $14 billion). One in five jobs in Iowa is attached to agriculture, per the Iowa Farm Bureau.

While a majority of people in the 1st District oppose the tariffs, farmers like Kronlage haven't dampened on Trump despite the potential hits farming faces from the trade war.

"'You know, farmers are businessmen," he said, inside the kitchen of the house where he was raised, on the farm his family has owned for 130 years. "We know that sometimes things have to get done that aren't too pleasing right now, but in the end, it's going to be a good thing. And so we understand that."

That same willingness is less prevalent in urban areas, where skepticism and outright disapproval of the president is strong, and issues like health care, education, the environment and immigration are motivating people to the polls. The political tension has only grown in recent years, say people who spoke with NCR, muting more conversations in a state where such exchanges have typically been the norm.