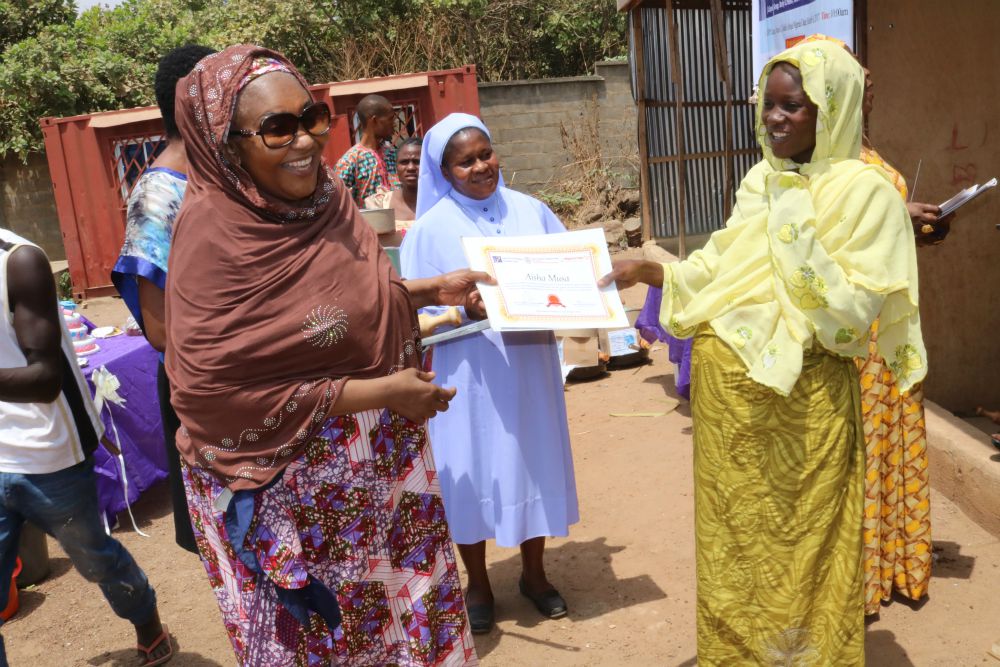 One of the participants receives her certificate after the two-week empowerment program. (Courtesy of Sr. Agatha Chikelue)

Abuja, Nigeria — When Fatima Isiaka, a religious Muslim teacher, asked the cab driver to drop her off at St. Kizito Catholic Church in Abuja, the driver thought she was lost. "The cab man that took me to the church, a Muslim, was surprised to see me enter a church," Isiaka recalled of the summer 2014 meeting. "He told me, 'This is a church!' I said, 'Yes, I know.' "

Isiaka was part of innovative effort to bring Christian and Muslim women together in hopes of fostering religious tolerance and peaceful co-existence. The Women of Faith Peacebuilding Network was first started in 2011by Sr. Agatha Ogochukwu Chikelue, of the Daughters of Mary Mother of Mercy congregation, and local Muslim businesswoman Maryam Dada Ibrahim.

Isiaka, an observant Muslim who wears a grey jilbab, a long head covering and robe, the traditional dress of some Nigerian Muslim women, is a respected Muslim leader in Abuja. Today, she serves as deputy director in the network's Abuja branch.

She looks back fondly on her time at the St. Kizito Catholic Church. "It was an amazing experience and I loved every bit of my stay there," said Isiaka. "In fact, I found a place in the church where I performed ablution [ritual washing before Muslims prayer], to set up my mat and pray."

Since the group started in 2011, the Women of Faith Peacebuilding Network's activities have reached more than 10,000 Muslim and Christian women across the country through seminars, meditations, presentations by religious leaders, and dialogue.

The peacebuilding network also offers vocational training in catering, bead making, fashion design, and soap production to a smaller group of women who participate in the annual 21-day seminar. "The empowerment [training] serves as bait to lure more women to the network so that they'll learn peaceful coexistence," said Isiaka. The Swiss Embassy provided seed money to get the vocational training started in 2014. Cardinal John Onaiyekan's Foundation For Peace (COFP), an organization working for peace in northern Nigeria, has sponsored the vocational training in subsequent years.

Since 2009, Boko Haram, a group of extremist Muslims whose name means "Western education is forbidden" has terrorized northeast Nigeria. The terror group murdered Christians and burned churches, hoping to clear the area of Christian influences and create an Islamic caliphate to rule under Sharia law.

Hajya Fatima Isiaka, left, is co-deputy director of the Women of Faith Peacebuilding Network in Abuja, Nigeria; right: Ekene Ofodili is a Catholic laywoman who oversees the six chapters in Abuja alongside Isiaka. (Festus Iyorah)

Chikelue knew that religious leaders would need to step up. "We don't want to use our religion as barrier, rather we want to use it as stepping stone towards achieving common good," she said. "The essence of an interfaith group is to break barriers, break the walls and build bridges."

In Nigeria, some religious clerics forbid their members from even visiting a house of worship from the other religion. But Chikelue dismissed those notions, using the respect afforded to her as a Catholic sister to visit mosques and set up meetings with more moderate Islamic clerics to propose an interfaith network.

But Chikelue knew she couldn't do it alone.

A parishioner recommended Chikelue contact Ibrahim, a respected leader in the Muslim community. Chikelue visited Ibrahim's office, and within a few months the two started planning the first meeting between Christian and Muslim women in Abuja. As the capital of Nigeria, Abuja, a growing city with a population of 2.5 million, is more diverse and integrated than other parts of the country. The city is about 40 percent Christian, and the Christian population is growing quickly.

Chikelue and Ibrahim recruited Cardinal John Onaiyekan, the archbishop of Abuja, and Muhammadu Sa'ad Abubakar III, the sultan of Sokoto and president-general of the National Nigerian Supreme Council for Islamic Affairs, to act as patrons of the organization.

"Getting the Muslim women was not as difficult as getting the Christian women," Chikelue recalled. "We started during the early days of the insurgency [with Boko Haram in northern Nigeria]. The insurgents started with bombing churches and killing Christians before they started killing Muslims too. A lot of Christians were holding grudges against Muslims at the time. Anytime we planned a meeting with Muslims, the Christian women would withdraw. They'd say 'All Muslims are Boko Haram.' "

It took time, patience, and weekly meetings after Sunday Mass to convince the first group of Christian women to sit down with Muslim women. 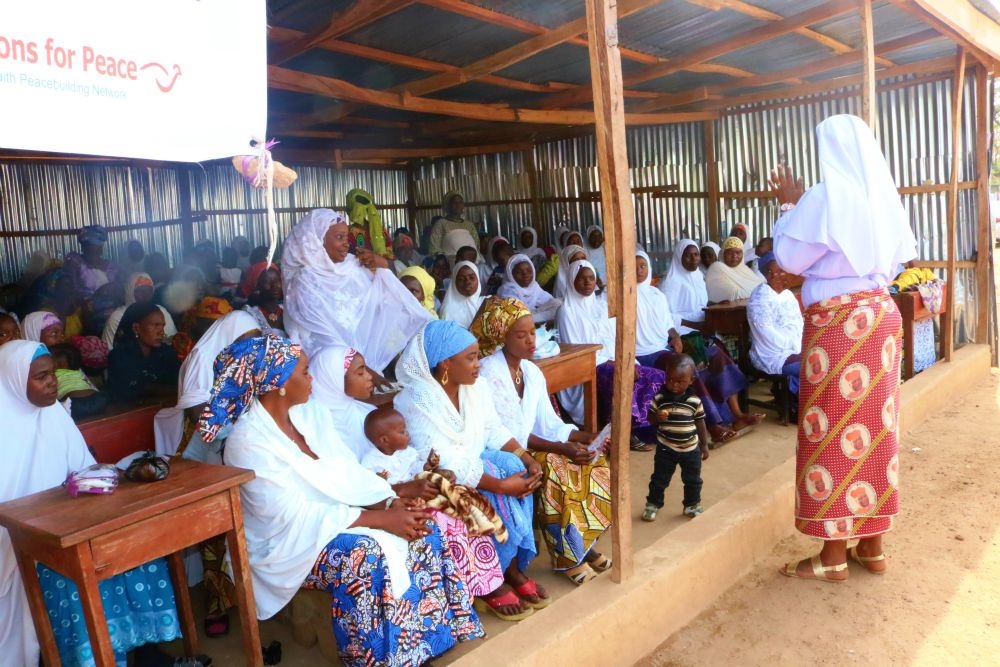 Women attend an empowerment program that was sponsored by Cardinal John Onaiyekan foundation for peace in 2017. (Courtesy of Sr. Agatha Chikelue)

"That first meeting in 2011 was one of the best meetings we've had," said Chikelue. "The Christian women changed their perceptions about Muslims even after just one dialogue together. Everybody went home happy."

The women's meetings include presentations by clerics and priests, explaining basic tenets of each religion or challenging the view of religious extremists who say that Muslims and Christians should not interact with each other. Sometimes they discuss parts of their religions that overlap; for example, when Abraham plans to sacrifice Isaac, and how both religions interpret the story.

"Peace can be achieved through dialogue," Chikelue said. "When Muslims and Christians sit together to explain how both religions operate it will aid understanding and put out any form of ignorance, stigma or hate that both parties have against one another."

The women also visit each other for holidays. In 2017, a group of Christian women prepared the evening meal at the mosque to break the fast during the Muslim holiday of Ramadan. Muslim women have joined for special church programs, especially the annual end-of-the-year interfaith party organized by Onaiyekan.

The decision to create a women's peace network was made after careful deliberation about which group would be most effective for fostering peace. Women have a unique a way of addressing conflicts, Chikelue explained. "In the family, women manage the home and are closer to their children, making it easy for them to preach peace," she said. It can also be empowering for women, who are often marginalized, to suddenly have a leadership role in creating a more tolerant community. "We also want women to be aware of their role in peace building," Chikelue added.

In 2014, with a special grant from the Swiss embassy, Chikelue began offering vocational training for the women as an added incentive. In a region where the female adult literacy rate is 41 percent, women welcome free empowerment training on sewing, soap making and catering. Basic communication skills, personal hygiene and training on financial literacy and how to start small businesses are also part of the free empowerment program. The training programs also help the women meet people from other religions, getting to know the "other" as well as combating poverty and gender-based violence.

"When there's peace at home, we can achieve peace in the society. That is why we empower women in order to stop gender-based violence between women and their husbands," Chikelue said.

The women who participate in the peacebuilding network are expected to pass on the information to the children in their communities by making presentations in their elementary and secondary schools about religious tolerance and talking about their experiences working with women from other religions. 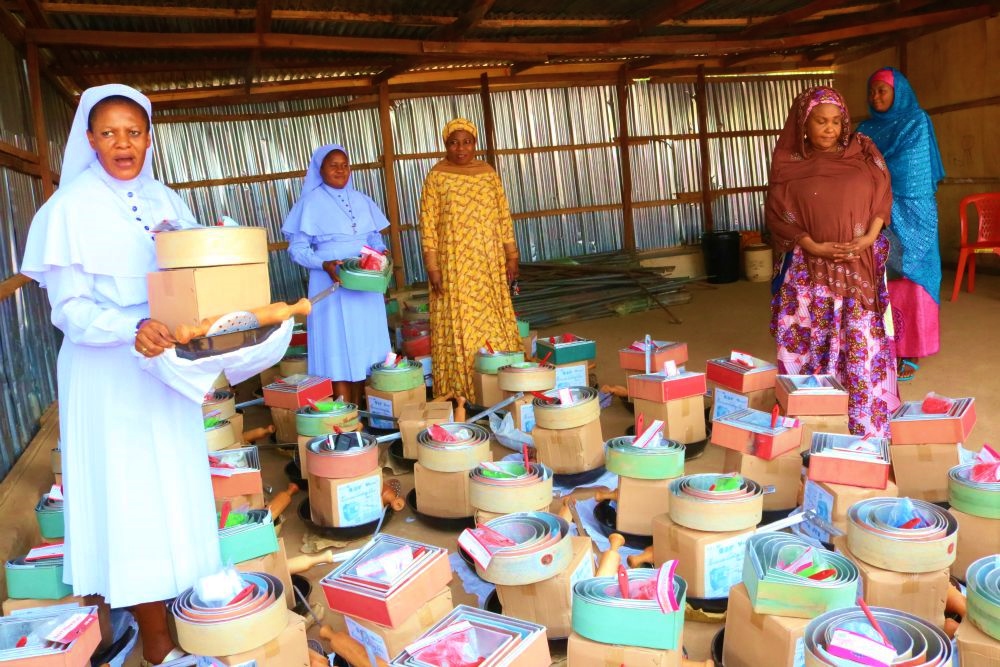 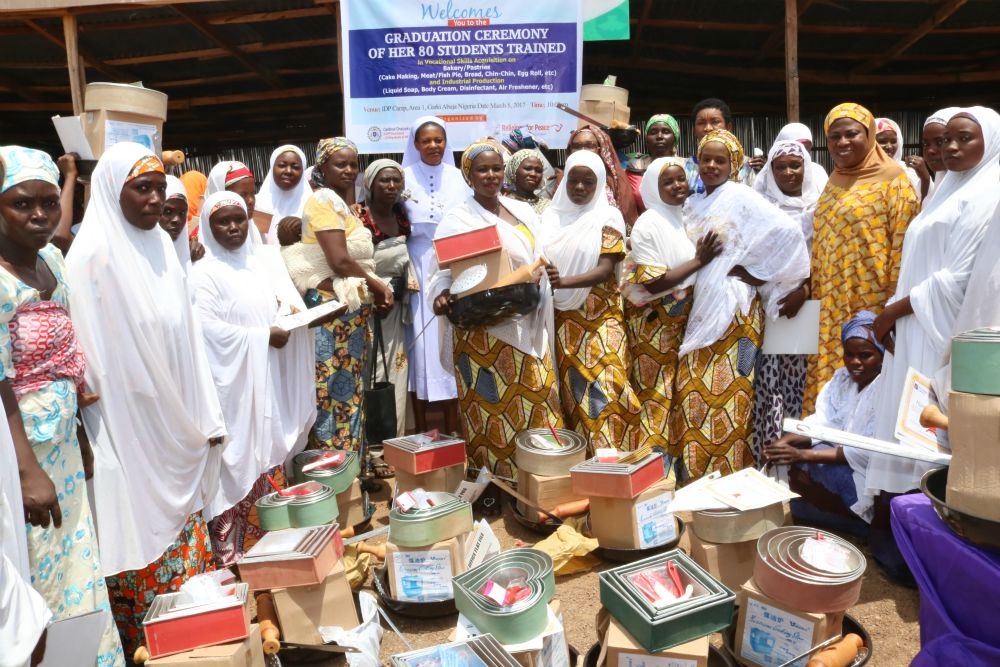 Participants of a Women of Faith Network empowerment program organized in 2017 learned catering and were given catering equipment afterward to try their businesses. (Courtesy of Sr. Agatha Chikelue)

The network has made it easier to gather Christians and Muslims to speak on certain issues with one voice, Chikelue told GSR. For instance, in 2015, the network protested against a bill proposed to ease restrictions on obtaining an abortion. Armed with banners scrawled with messages against the bill, both Muslim and Christian women marched under the scorching sun to Nigeria's parliament. The bill was later dropped.

Isiaka, the Muslim teacher whose cab driver thought she was lost, oversees the six chapters in Abuja with Ekene Ofodili, a Catholic laywoman.

Ofodili was one of the people who believed that all Muslims were Boko Haram, and at first, she resisted any interaction with Muslim women. But after Chikelue's encouragement in 2011, Ofodili started seeking out Muslim women to hear their stories.

In 2012, Ofodili was invited to Turkey as a guest of a Turkish government-sponsored peacebuilding tour. The program invited Christians and Muslims women working to fight religious violence in Africa, the United States, Asia and Europe to discuss peace, harmony and religious tolerance. Additionally, the Turkish government wanted to highlight its own peacebuilding efforts by visiting areas where minority Christians lived with Muslims in harmony. In Turkey, Ofodili mingled with Muslim participants and entered a mosque for the first time.

"It changed my mentality about Muslims, and that's why I can move with them," Ofodili said of her time in Turkey. "Often times, many of the Catholic women shy away [from meeting with Muslims], but I tell them never to use one person's actions [like the Boko Haram insurgents] to generalize an entire religion."

Ofodili owns an English version of the Quran, a gift she got in one of her visits to the Muslim community in Abuja, which she reads in her free time.

"I discovered that the Muslims also recognize the Blessed Mother Mary," said Ofodili. "That was when I had a total change of mind about them. I am a Legionary [a member of the Legion of Mary, a lay Catholic organization focused on Mary and charitable work], and anyone who says something good about our Mother is endeared to me," she said. 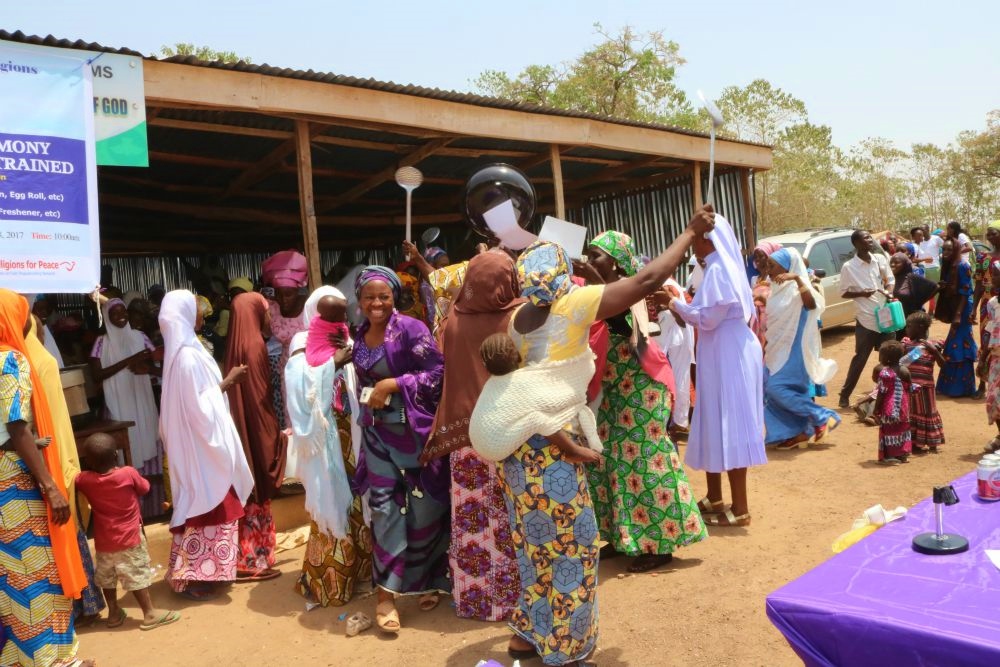 The women celebrate after receiving catering equipment from the network. (Courtesy of Sr. Agatha Chikelue)

In the Quran, an entire chapter (called Surah 19/Surah Maryam) is dedicated to Mary's genealogy, childhood and her role as the mother of Jesus.

Isiaka, Ofodili's co-deputy director in Abuja, said she did not face any opposition from her Muslim community regarding her interfaith work.

"We have been able to understand each other better and have also passed the message of religious tolerance to our children," she said. While the group has worked hard to break down barriers and build friendships, she knows there is still much work to do. Still, Isiaka is optimistic.

"If we groom our children this way, I think in the next few years, we'll have the peace we are all craving," she said.

[Festus Iyorah is a Nigerian freelance journalist and photographer based in Lagos.]

The power of African Catholic nuns needs to be unleashed

A five-village forest journey to water wells in Africa

It's the morning after a mass shooting: What do we do now?

A journey with the homeless

Kentucky congregation confronts its slaveholding past, works for racial justice