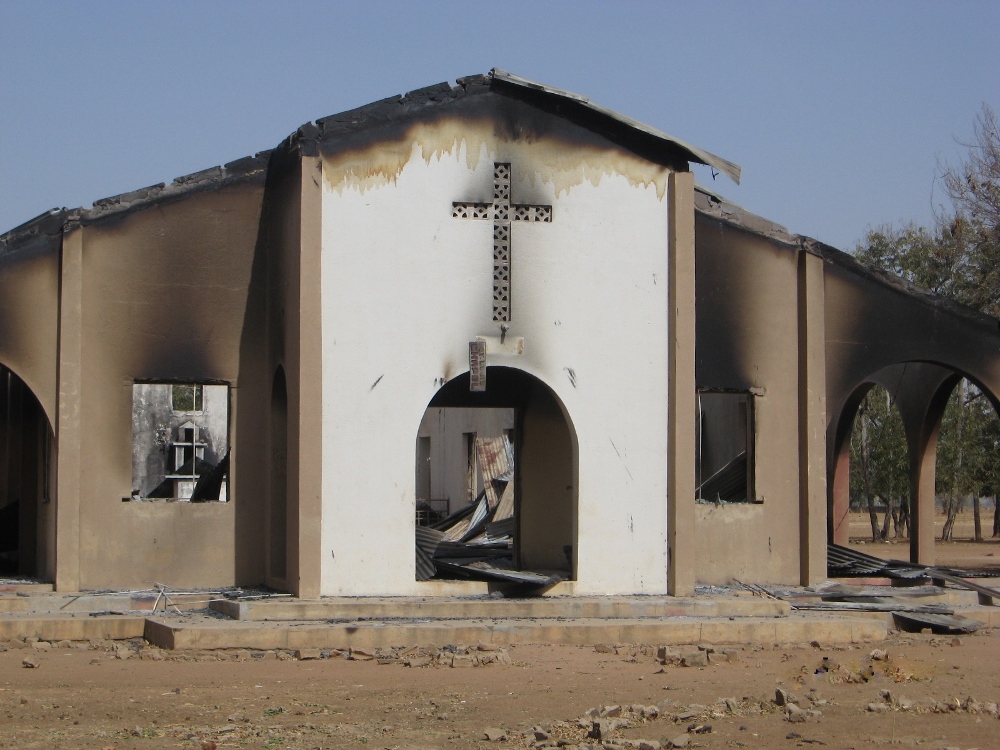 Boko Haram terrorists attacked and burned a junior seminary that stood next door to the hospital. (All photos courtesy of Sr. C. from the attack on the hospital outside of Maiduguri Feb. 26, 2014.)

Lagos, Nigeria — The terrorists burst out of the bush on Feb. 26, 2014, in a small village outside of Maiduguri in Nigeria's northeastern region. One of the terrorists climbed over a wall surrounding a clinic run by sisters and killed two security guards. The rest broke through the gate, storming the clinic.

They attacked the maternity ward, which serves anywhere from 60 to 90 mothers, burning beds, smashing windows, destroying the entire wing. Smoke billowed out of the windows. Luckily, no patients were sleeping in the wing at the time. After hours of chaos and destruction, the terrorists melted back into the wilderness, leaving a blackened shell behind them.

Sisters in northern Nigeria were dealing with the terror campaign from Boko Haram months before the fanatical Muslim terror group erupted onto the world's consciousness in April of this year, after they kidnapped 276 schoolgirls near the town of Chibok.

For a while, the world focused a spotlight on this forgotten corner of Nigeria, demanding the return of the girls with a viral social media campaign to #BringBackOurGirls. Though a handful of them have escaped, the majority are still captives or possibly have been murdered. Meanwhile, the worlds' attention has shifted, as time moves on – the World Cup, the situation in Israel and Gaza, Malaysian Airlines flight MH17.

Particularly heinous acts by Boko Haram still make the international news, such as last week when terrorists twice attacked the town of Damboa, a village about 90 kilometers south of Maidugri, killing more than 100 people.

Before the latest troubles began, there were 47 sisters from three congregations working in the diocese around Maidugri. Sixteen sisters remain. They insist on completing their ministry despite the danger and refuse to abandon their communities.

On July 15, Human Rights Watch announced that Boko Haram had killed 2,053 civilians in 95 attacks since the beginning of the year. Three quarters of those deaths were in the Borno State, where Maiduguri is located, which had the optimistic slogan “Home of Peace” before the fighting began. Other deaths came from bombings in the Nigerian capital of Abuja and Jos, both major cities in central Nigeria.

Boko Haram's goal is to create a strict Muslim Sharia state in Nigeria, though only half of Nigeria's 170 million residents are Muslim. Forty percent of the population is Christian and 10 percent follow traditional beliefs.

Global Sisters Report spoke by phone from Lagos with three sisters living in Maiduguri to understand their day-to-day lives and how they deal with the threat of terror. (All identifying information, including their names and congregations, has been omitted to protect the sisters from retribution.)

“During the week, you're afraid to come out of the house, you may be killed walking on the road,” said Sr. M., who is an administrator of a nursery school at a sisters-run school. “You can just be walking, and all of a sudden there is a bomb blast. Every day we ask God to protect us.”

“Being on a mission in this land is very difficult,” she added. “We are afraid. We just pray, it gives us courage to forge ahead. Every day we hear bombings and shootings, but you can't just close up the school.” 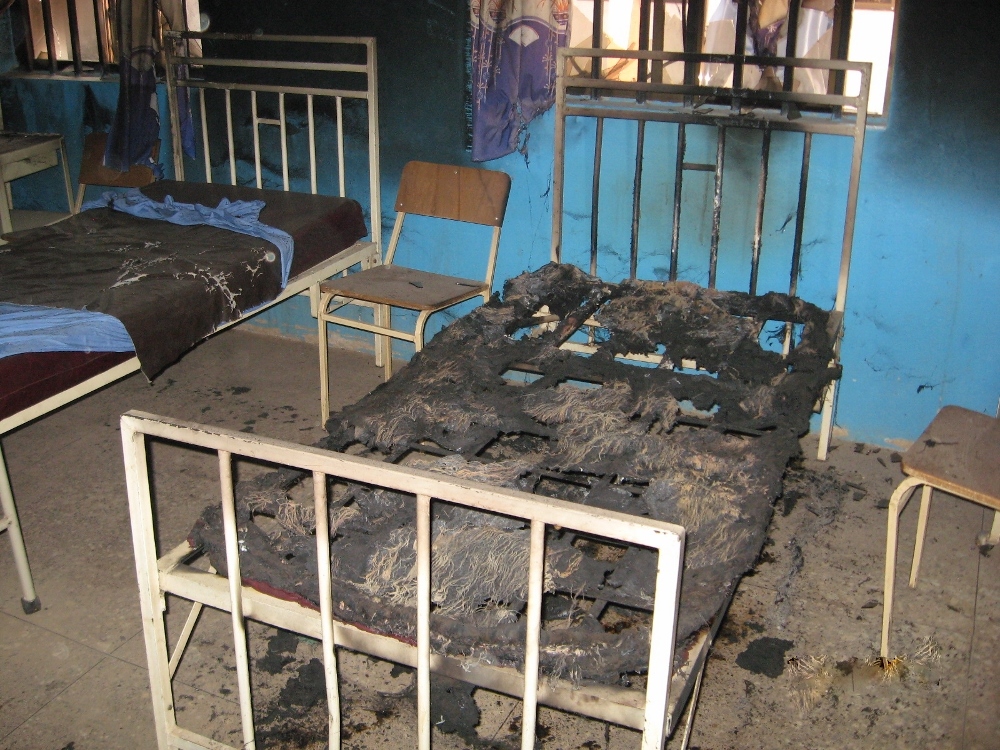 A bed burned in the maternity ward of the sisters' hospital.

“Before we go out, we beg Jesus to protect us,” said Sr. L., who is the bursar of a secondary school in the same school system. “You hear bombs all the time.”

The school system used to serve about 800 students from kindergarten through secondary school. Students from the eastern part of the country have left in recent months, and attendance is now around 400, and still dropping.

“Parents are afraid to let their children out of the house,” explained Sr. M. “Some have left town. We don't have any security in front of the school. Sometimes we have older students out front looking out.”

Sr. C. is an administrator with the clinic south of Maiduguri that was attacked in February. Though northern Nigeria is majority Muslim, this specific village is 80 percent Christian.

After the attack, the sisters fled to Maiduguri, which as the major city in the area is considered safer than the lawlessness of the rural villages. In March two sisters returned to the village to assess the damage.

“In the time we were gone, five villagers had died [of treatable medical conditions], and we felt so bad because we were not there,” said Sr. C. When Boko Haram terrorists began targeting health workers and the sisters made the decision to move to Maiduguri, they trained a number of villagers in basic medical first aid to try to fill in the gaps.

Before, the congregation had five sisters running the clinic, which saw up to 800 people per week providing vaccinations and treating problems ranging from malaria to wounds and injuries. Now, the remaining two sisters return twice a week to deal with the most drastic medical needs, said Sr. C.

“The government is trying its best, but we have no security whatsoever,” she said. “We need some security and renovations for the neighborhood and our maternity ward, even though we don't know when we will come back again.”

Every time the sisters drive to their clinic, they risk roadside bombs, carjackings, abduction, or shooting. They described scenes of bodies piled one on top of the other, market squares covered in blood, entire families kidnapped and dumped in shallow graves on the outskirts of the town as a warning to the residents.

One of the most devastating aspects of Boko Haram is the psychological fear they inspire among residents of the north, who never know where the terrorists will attack. “No matter how high your walls are, they can get in,” said Sr. L. “They are operating in a way that you don't even know if they're coming.”

Because of the violence of the region, even local journalists do not dare investigate in person, relying on phone interviews to determine body counts or confirm the latest massacres. The chaos has spread beyond Nigeria's borders as well, including an incident where Boko Haram terrorists are believed to have kidnapped two Italian priests and a Canadian sister in April, though the three were safely released two months later. 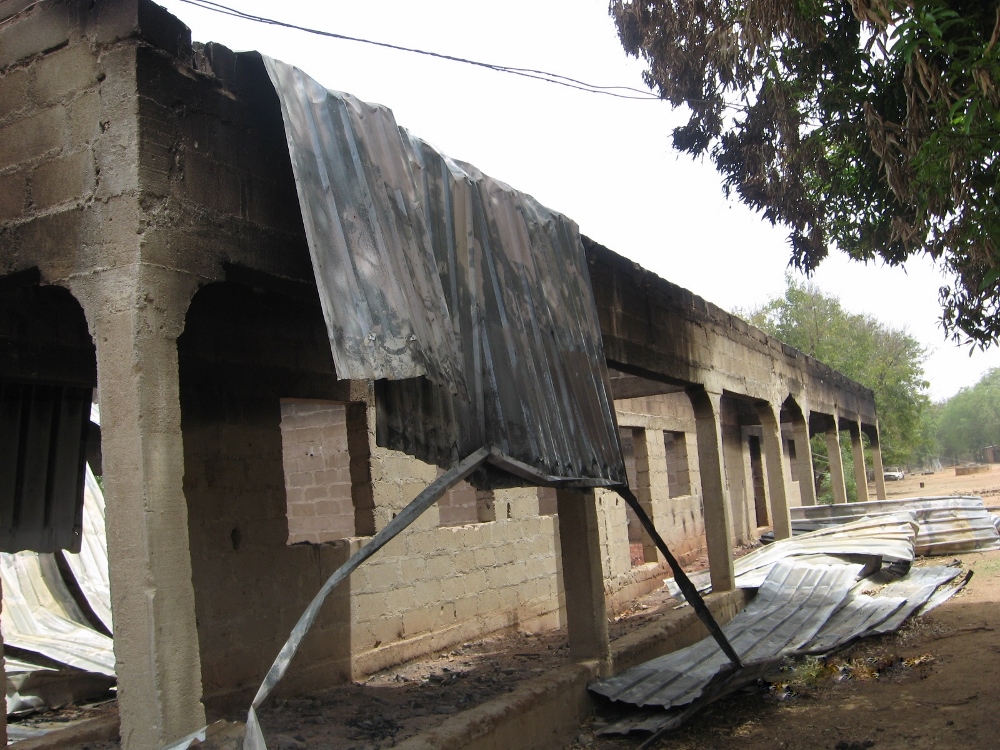 An outside view of the hospital after the attack.

“They are really happy the world is hearing about their work, and each time they try to do worse and worse things,” said Sr. C. But she was defiant when asked if the media should stop writing “No!” she said, emphatically. “People need to hear about it, and society needs to stop it. Let them try to come back again!”

Fr. M., a priest in Lagos who oversees a large Catholic church, encouraged the media to write about the situation with sensitivity and restraint. “The media is still a powerful means of communication for the masses,” he said. “Print and TV media need to be conscious of how the news is being presented, because the choice of words can make it provocative.”

On a recent Sunday, Fr. M. addressed more than 2,000 people gathered at a large Lagos church to let them know steps the congregation will take to improve security at the cathedral. Boko Haram has threatened to come more frequently to Lagos. They have recently claimed responsibility for bombings in Jos and Abuja, two cities in central Nigeria.

“Boko Haram wants to Islamize the whole country,” he said. “They want to extend their tentacles of terrorism to other parts of the states. Lagos is very populated, so it is a good target for them.”

On July 17, Lagos police invited church and mosque leaders for a security briefing. Mosques in Lagos are also a target for Boko Haram because the terrorists practice a fanatical strain of Islam and do not consider Muslims living in Lagos to be “true” Muslims, explained Fr. M. The police also met with leaders of banks, hotels and other public institutions that might be targeted by terror attacks.

Police instructed houses of worship to purchase scanners, security cameras, bomb detectors and automatic gates to protect against terror attacks. The leaders of churches and mosques signed a joint agreement to check every vehicle and person entering their space of worship, to issue ID cards to staff and to lock the compounds after activities rather than let homeless people sleep inside. Two police officers will also be stationed at every Sunday Mass and Friday prayers, Fr. M. added. 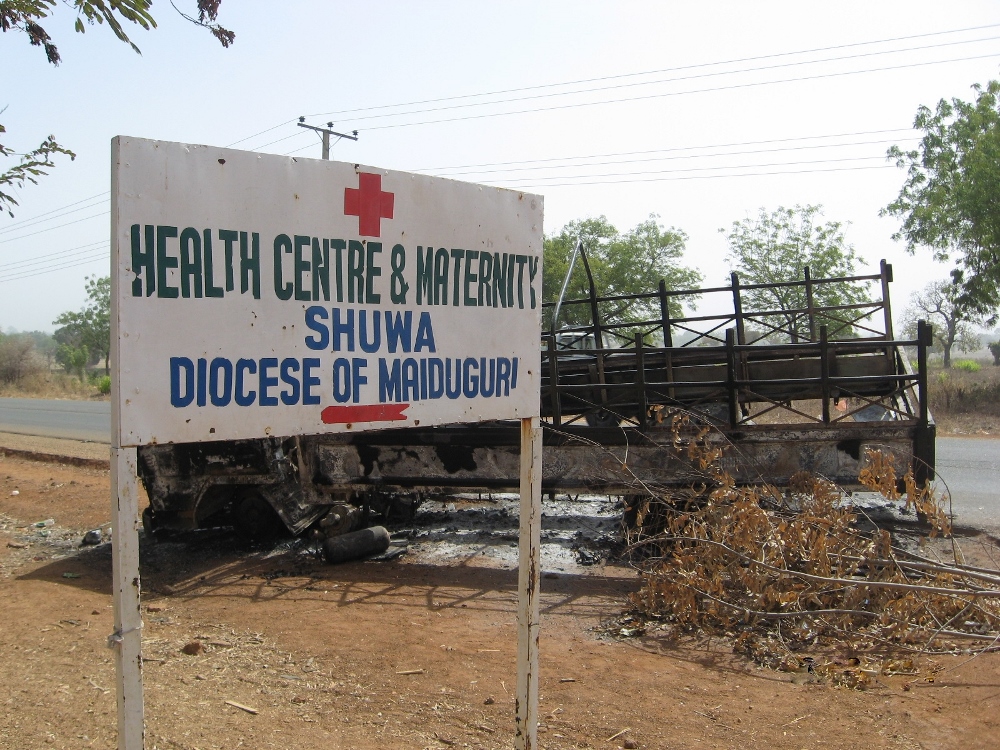 The hospital sign and the burned building behind it following the attack.

He said his church already took some security measures (installing an extra automatic gate at the entrance of the church), though neither people nor cars were searched at Sunday's Mass – and the electric gate stayed open the entire time.

Fr. M. said the Catholic Bishops Conference of Nigeria has asked everyone to pray for the security of Nigeria during the month of August by saying a rosary on Saturdays; each parish plans to hold a special Eucharistic Adoration on the last Sunday of the month.

Despite the growing fear that the situation will continue to deteriorate, the sisters in northern Nigeria refuse to leave their war-torn region.

“Whenever we have more fear, we get more strength,” said Sr. L.

Catholic residents of the north also refuse to give up. “The Cathedral has 5,000 people on Sundays at two masses,” said Sr. M. “The number is quite encouraging, despite the situation.”

Editor's note: An earlier version of this story misidentified the kidnapped priests' and sister's nationalities and number.

Q & A with Sr. Rose Thapa, first native superior general of her congregation