This article appears in the Abuse of sisters feature series. View the full series. 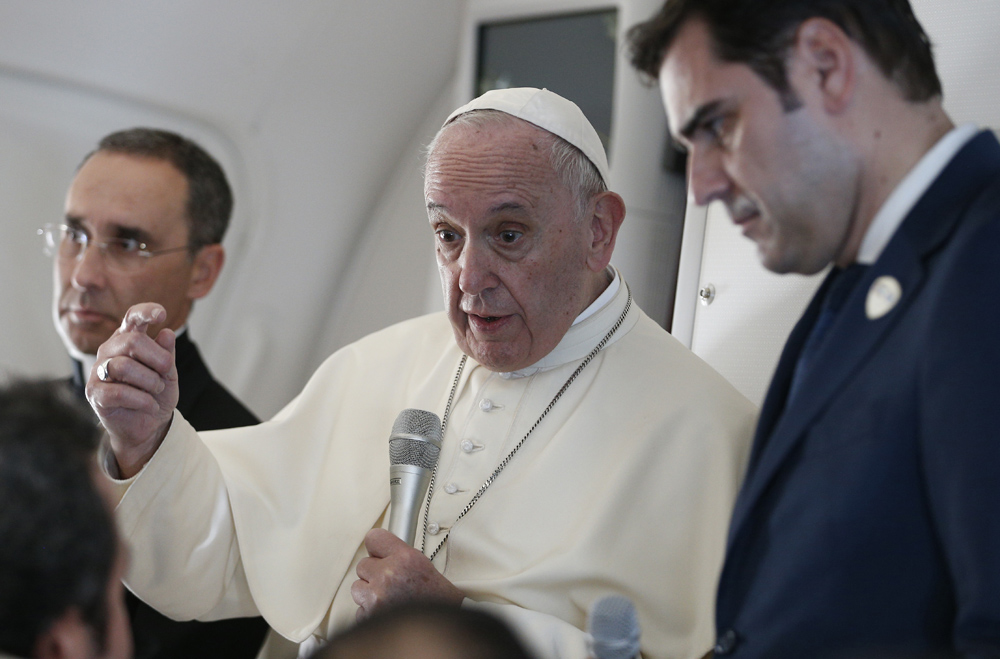 Pope Francis has admitted that the Vatican must do more to prevent the physical and sexual abuse of nuns and sisters by Catholic priests.

In a press conference aboard the papal flight back to Rome after a two-day visit to the United Arab Emirates, the pope said mistreatment of women religious is something the Vatican has been working to address "for some time."

"Must something more be done?" the pope asked aloud. "Yes," he answered.

"Do we have the will?" Francis then asked. "Yes," he answered.

Francis spoke about abuse of women religious in a half-hour press conference in which he also expressed openness to the Vatican stepping in to mediate in Venezuela, where the head of the country's national assembly has declared himself president after months of unrest over Nicolas Maduro's continuing leadership.

On abuse of nuns and sisters, the pope was responding to a question about whether the Vatican would be issuing any new guidelines or documents to help protect women in religious orders around the world after the city-state's semi-official newspaper, L'Osservatore Romano, called attention to the issue last week.

"There have been priests, and even bishops, who have done that," he said, referring to abuse of sisters. "And I would guess that it still happens today because it is not something that just ends because people know about it."

"We have been working on this for some time," said Francis, adding that the Vatican had suspended or "chased out" some priests after they had abused women religious.

Francis has been under intense scrutiny over the Catholic Church's handling of abuse for more than a year. He has called a first-of-its-kind Vatican summit of the world's bishop presidents for later in the month, which will focus on efforts to protect minors.

The pope was asked about abuse of women religious in the context of the summit, the newspaper article, and the November decision of the Rome-based umbrella group of sisters and nuns around the world to denounce what it called a "culture of silence" over mistreatment of sisters.

Francis praised his predecessor retired Pope Benedict XVI, who he said had courage "to do many things" on the issue.

Francis recalled a story of Benedict dissolving one religious order because "slavery, including sexual slavery" had taken place.

Francis said Benedict had begun the investigation of the order before his election as pope, when as Cardinal Joseph Ratzinger he was serving as the prefect of the Vatican's powerful Congregation for the Doctrine of the Faith.

Ratzinger, Francis said, had tried to take action against the order but had been stopped by "filters" at the Vatican who prevented him from doing so. The cardinal, Francis recalled, then directed his secretary to keep all the documents from the investigation in the congregation's archive.

"When he became pope, the first thing?" Francis asked, before answering: " 'Bring me this archive!' "

"And it started," the pope summarized, adding: "We must not get scandalized over this. They are steps of a process."

Francis did not identify the religious order Benedict dissolved, nor the "filters" that had originally prevented Ratzinger from acting.

Francis initially declined to respond to the question about abuse of Catholic nuns and sisters, the seventh of the press conference. He said he first wanted to field queries about his trip to the United Arab Emirates.

The pope returned to the issue at the end of encounter, after an additional four questions had been asked.

"Pray that we may go ahead," the pope said of the Vatican's efforts to protect women religious. "I want to go ahead."