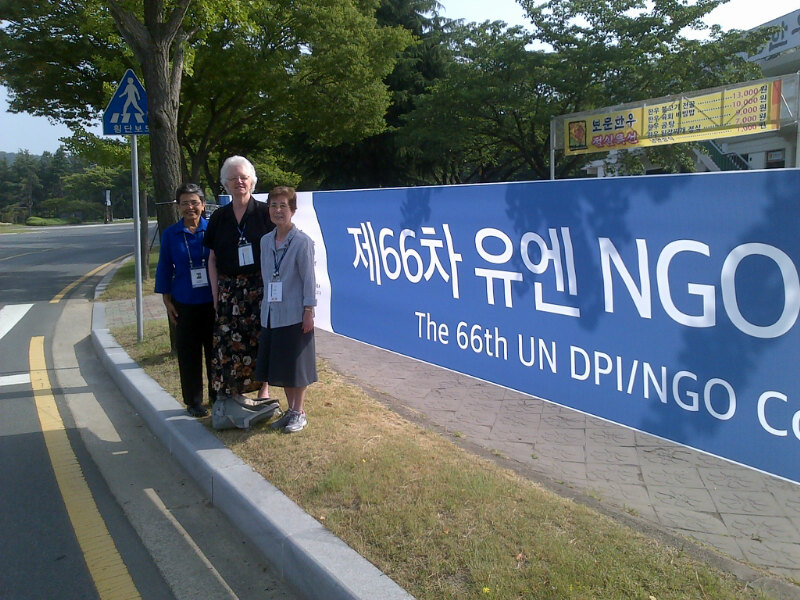 Srs. Lourdes Pangelinan, Eileen Reilly and Gloria Hirai are members of the School Sisters of Notre Dame from Guam, the United States and Japan. They participated in a recent United Nations conference in South Korea for non-governmental organizations. (Provided photo)

New York, N.Y. — Women religious who work at the United Nations and attended a recent United Nations conference in South Korea on education and global citizenship say the U.N.'s affirmation of human rights-based education is an important step in efforts to reduce poverty and promote sustainable development.

"So much of the news of the news in the world today revolves around a sense of nationalism, of 'protecting my turf,' of 'my country' and 'my values,' Reilly told GSR upon returning to the U.S. from the Korean conference, which focused on the theme of "Education for Global Citizenship: Achieving the Sustainable Development Goals Together."

Achieving the U.N.'s Sustainable Development Goals — 17 global goals agreed to by U.N. member states to reduce poverty and promote a sustainable environment through the year 2030 — will require more efforts to encourage global cooperation, Reilly said. "Education is crucial to the whole thing," she said.

The affirmation of education is exactly what participants at the event affirmed in an action plan at the end of the three-day conference. "Education is a human right, essential to well-being and dignity, and is key to achieving Agenda 2030," participants said, citing the formal name of the U.N.'s goals through the year 2030.

To do this, an "ethos of global citizenship is required." Goal Number Four, ensuring "inclusive and equitable quality education" and promoting "lifelong opportunities for all" remains a guiding principle, they said.

The statement also affirmed that education for global citizenship "is an essential strategy to address global challenges as well as to promote gender equality, facilitate the eradication of poverty and hunger, build skills, eliminate corruption, and prevent violence, including violent extremism."

Such education can also promote efforts to promote "sustainable production and consumption" and mitigate "climate change and its effects."

Sr. Winifred Doherty, the U.N. representative of the Congregation of Our Lady of Charity of the Good Shepherd, told GSR that the conference's locale in South Korea had special significance, with a notable focus "on South Korea's progress of [rising from] poverty in the post-war era through the promotion of education. Korea wants to share this experience with other countries experiencing poverty," she said. "Education is the key."

Reilly said she was struck by the same emphasis, noting that U.N. Secretary-General Ban Ki-moon, a Korean, spoke personally of his education following the Korean War. Reilly said Ban had been educated "under a tree by U.N. aid workers who came to Korea after the schools had been destroyed."

Without the education he received from the UNICEF, the U.N.'s education fund for children, Ban said he would never have become the global body's secretary general. 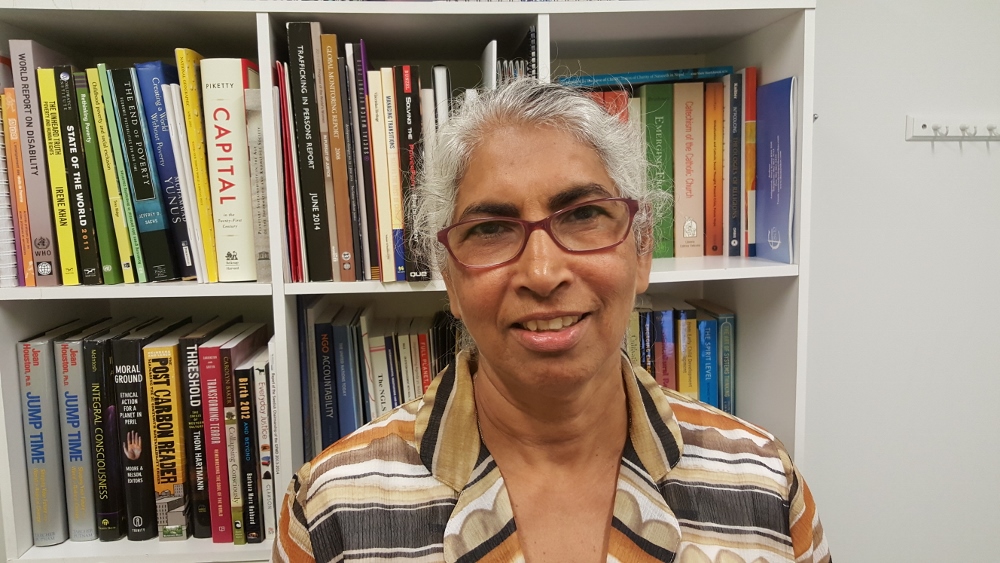 Sr. Teresa Kotturan, is an NGO Representative at the United Nations for the Sisters of Charity Federation. (GSR photo / Chris Herlinger)

Another participant at the conference, Sr. Teresa Kotturan, the U.N. representative of the Sisters of Charity Foundation, said in an interview prior to the event that the importance of such conferences should not be underestimated. They become part of an ongoing dialogue about the role of education in promoting a more just and sustainable world, she said.

The idea of global citizenship, she added, is about communities and individuals affirming the idea that fighting poverty and promoting human rights, peace and a sustainable environmental future should be the concern of all.

That is a "tall order" and an ambitious agenda, Kotturan acknowledged. But she said the precepts are basic and understandable. Asked to describe the ethos of global education, Kotturan said it would be, "I care about the human rights of everyone, and ensure that no one is left behind."

"If I have to stand up for you, I have to have a feeling that you are my sister or brother," she said. "We can't be building walls anymore."

An awareness of human rights of others, even in other countries, has to be added "to civic learning."

In a presentation at the conference, Kotturan said that education was the undergirding foundation for all of the U.N.s Sustainable Development Goals. "Education for global citizenship will be the key to the future of sustainable development," she said.

To do that involves advancing a "social justice approach" that analyzes "how social, economic and political forces in society produce patterns of injustice, and to better understand and address the root causes and change structures.

Catholic sisters have a role to play in this, Kotturan said, both with their long tradition of teaching as a vocation and their strong commitment to social justice.

In a presentation she made for members of the Vincentian Family in Seoul, South Korea, about global citizenship and the work of the United Nations*, Kotturan cited Pope Francis' environmental encyclical, Laudato Si', in affirming the need for education that promotes global citizenship.

"Good education plants seeds when we are young, and these continue to bear fruit throughout life," the encyclical says, adding, "Our efforts at education will be inadequate and ineffectual unless we strive to promote a new way of thinking about human beings, life, society and our relationship with nature."

More than 2,000 attended the conference, and included representation from religious congregations who have non-governmental organization status with the U.N., educators, activists, business representatives, local officials, U.N. personnel and others.

*An earlier version of this article incorrectly said Kotturan made the presentation at the May 30-June 1 conference.