Following the takeover of the northern Iraqi city of Mosul by Islamic extremists this week, an estimated 500,000 civilians poured out of the city, fleeing bullets and burning wreckage. Yet, in all the chaos, one group remains resolute in its determination to stay in Mosul: the Dominican Sisters of St. Catherine of Siena, a congregation of Iraqi sisters that has witnessed generation upon generation of war and carnage.

Sr. Donna Markham, former prioress of the Dominican Sisters of Adrian, Mich., spoke with the sisters in Mosul by phone three days after the extremist group ISIS, also known as ISIL, took the city. They told her the militants had left and were marching toward Baghdad, which they had promised to take next.

Still, the sisters are far from safe. In addition to reports that there is no electricity in post-siege Mosul and that water supplies are low, the sisters also face the burden of living in a region that has become increasingly hostile to Christians.

“I think, in the past, there’s probably been an idea that everything was fine in Iraq after we pulled out,” said Markham, referring to the December 2011 exit of the last U.S. troops. “I’ve been there twice — once before our troops left and once after, and it’s clear that things aren’t fine at all. It’s been on the edge of civil war ever since we left, and the Christians are caught between the Sunni and the Shia, and they’re certainly targeted by the fundamentalist Islamists.”

And, indeed, according to some, sectarianism played a part in the recent attack on Mosul.

ISIS, an offshoot of al Qaeda, is Sunni — as are about 85 percent of Muslims. Sunnis differ from Shias in several ways, but the historical divide stems from a question of leadership. After Muhammad’s death, Sunnis believed the people should elect the next leader. Shiites, on the other hand, wanted leadership to pass directly to Muhammad’s son-in-law, and they subsequently considered any elected leaders to be illegitimate.

Following the Mosul attack, there were widespread accounts that, when confronted by ISIS, Iraqi soldiers simply abandoned their weapons and fled. And according to reports from the American news site Vox, this was because the army is divided along Sunni and Shiite lines. Essentially, Vox reported, Sunni soldiers were uninterested in preventing a Sunni group from taking control of the city.

Of course, there were dissenting reports. According to TIME, Iraqi soldiers fled from militants because they lacked “tactical competence.” The BBC cited the soldiers’ demoralization. Whatever the case may have been, ISIS, at least, was clear on one point: Christianity would not be tolerated in their Mosul.

“In their statements, they said they are going to destroy any shrines or anything that speaks of the, quote, infidel,” Markham said.

If ISIS maintains control of Mosul, that could be true; when they took control of the Syrian city of Raqqa last year, they burned churches and forbid any outward sign of Christianity, including the ringing of church bells or praying in public. Christians were also required to pay a tax in exchange for safety.

This is a far cry from the Iraq Christians have known, or even that Iraq the Dominican sisters have known in their almost 150-year history. With few exceptions (most notably, mass persecution during World War I) Iraqi Christians have lived in peace. Dominican sisters first came to Iraq from France in 1873, and according to the Dominican Sisters of St. Catherine of Siena’s website, by 1877, they had formed the first congregation of Iraqi nuns.

The Iraqi sisters set out to educate girls and to care for the sick, and today, they still run a hospital as well as elementary and secondary schools. The congregation survived the violence of World War I, the Gulf War and — of course — the United States-led Iraq War, in which a missile hit and damaged their motherhouse. And they have survived the escalation in anti-Christians violence that has coincided with the Iraq War and its aftermath, staying in Iraq when many other Christians have not.

By 2012, nine years after the start of the war, half of Iraq’s Christians had fled — some to Turkey, other to Europe or the U.S. Last month, when an ecumenical group of leaders descended on Capitol Hill to call for an end to the persecution, Andrew White, an Anglican chaplain in Baghdad, noted that Iraq’s Christian population had dwindled even more: there were only 200,000 left from a high of 1.5 million.

“The extraordinary thing about the sisters right now is their commitment, regardless of the danger, to stand with their people and not abandon them,” Markham said.

The sisters are well aware of the danger in their situation, especially now that ISIS controls Mosul, at least for the time being. Yet, Markham said all anyone can do for them is pray.

“One of the contemplative Dominican nuns from British Columbia stated in an email to me, ‘We need to pray that God will send angels to protect them, because we cannot. God will send angels where we can’t go,’” she said. “And I thought that was beautiful. All we can do is pray very, very hard.” 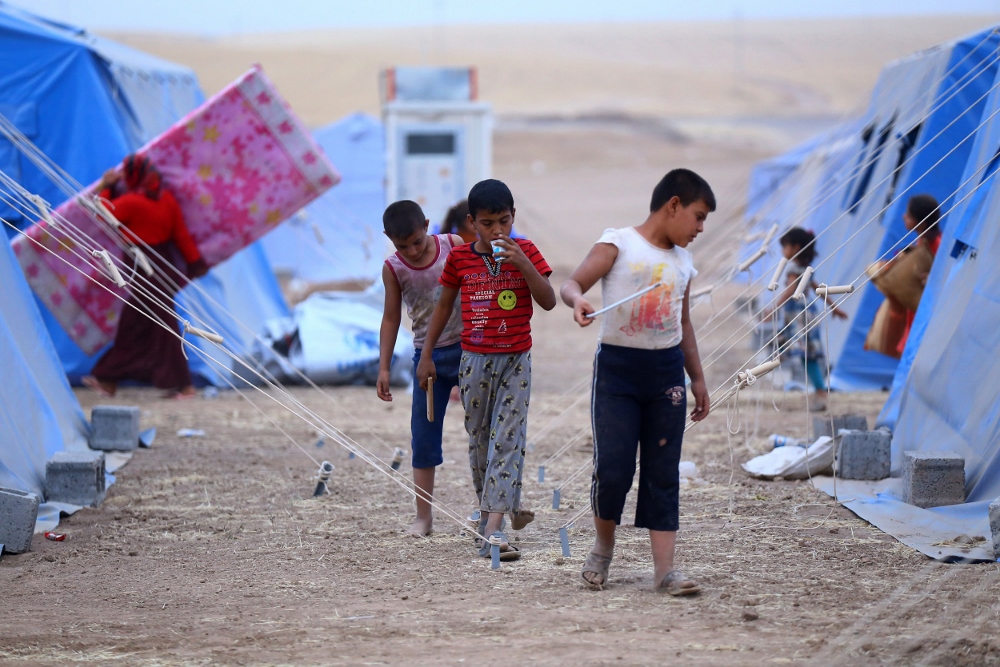