by Dawn Araujo-Hawkins
This article appears in the LCWR 2016 feature series. View the full series. 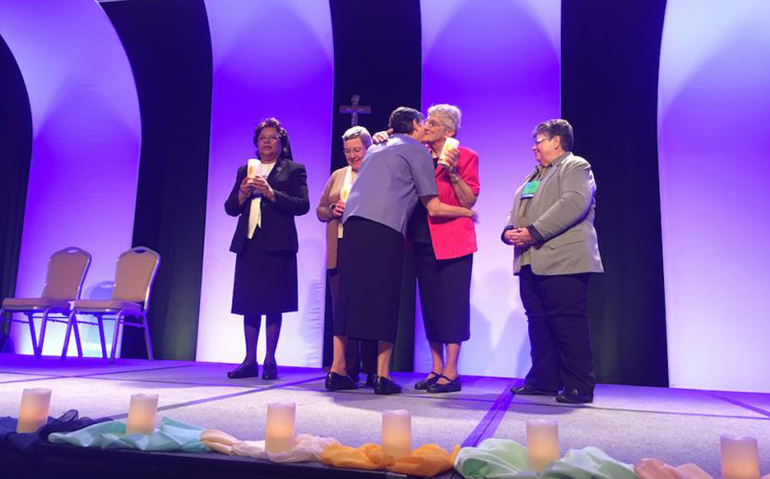 Bidding farewell to the outgoing chairs of four of the LCWR regions. (GSR photo / Dawn Araujo-Hawkins)

Atlanta, Georgia — After two days spent deeply discerning the movement of the Spirit in regard to future of religious life, on Friday, August 12, the membership of the Leadership Conference of Women Religious took a step back to reflect on the 2016 assembly and to celebrate some of its leaders.

"I feel as if I have been in the presence of love this whole week. I'm feeling a deep, deep sense of interconnection," Sweeney said, a nod to her earlier presentation about the evolution of human consciousness and supremacy of love. "There is something so humbling about being here in this moment and not knowing how to take the next step and taking it anyhow."

Farrell then asked Wheatley about her thoughts on religious life, given that she has a close connection with sisters but is a vowed Buddhist, to which Wheatley replied that all vows are unachievable:

"[Vows] are a path of perfection that we set out on because it's who [we] want to become. But it's not who [we are] now," she said. "A vow is something that we continue to recommit to with our increasing maturity. Otherwise, it stays pretty mild and not strong enough for who we are becoming."

But perhaps the highlight of the conversation was an exploration of the role of the prophet today's world. 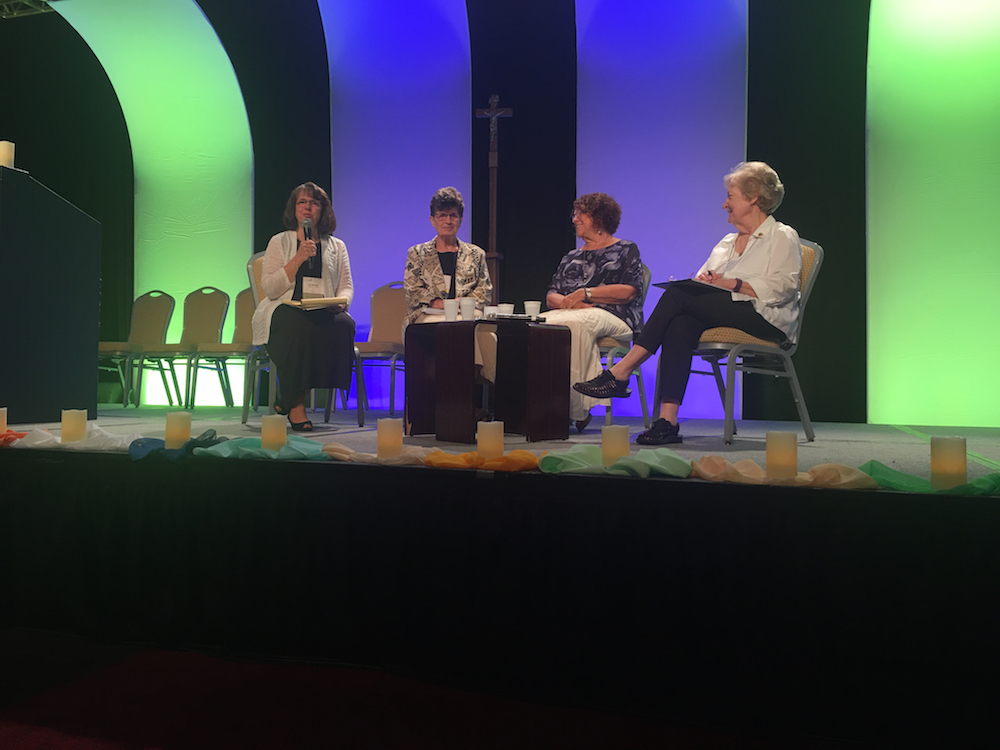 "This year, when I was on retreat, I gave up — consciously, deliberately — the role of prophet and chose instead the role of embodiment," Wheatley said. "May I just be the kind of human being that I want others to be as well. So may I be embodiment, and through that, be teaching."

Her reasoning, Wheatley said, was that prophets always end up bitterly disappointed because their warnings are ignored. "It's a very painful role and it can lead to anger." Rather than prophets, she said, the world needs mystics.

Sweeney agreed but had a clarification.

Farrell chimed in saying she did not believe the situation was that black or white.

"I am uncomfortable with thinking of this in an either/or kind of way, which I don't think is what we want to say here," Farrell said. "To stand with people who are in pain and to develop the capacity through the mystical light to be present without running away and without needing to change a person . . . that is prophetic."

After the living room conversation, LCWR members were invited to reflect on the week, specifically, about what they wanted to share when they returned home, what energized or surprised them and what grace they had received.

The assembly concluded with a banquet at which the official transfer of leadership occurred and the Outstanding Leadership Award was presented. Immaculate Heart of Mary Sr. Sharon Holland received a prolonged standing ovation as she ended her term as LCWR past-president — LCWR executive director Holy Cross Sr. Joan Marie Steadman noting that, for 21 years, Holland was the highest ranking woman at the Vatican, which drew applause. 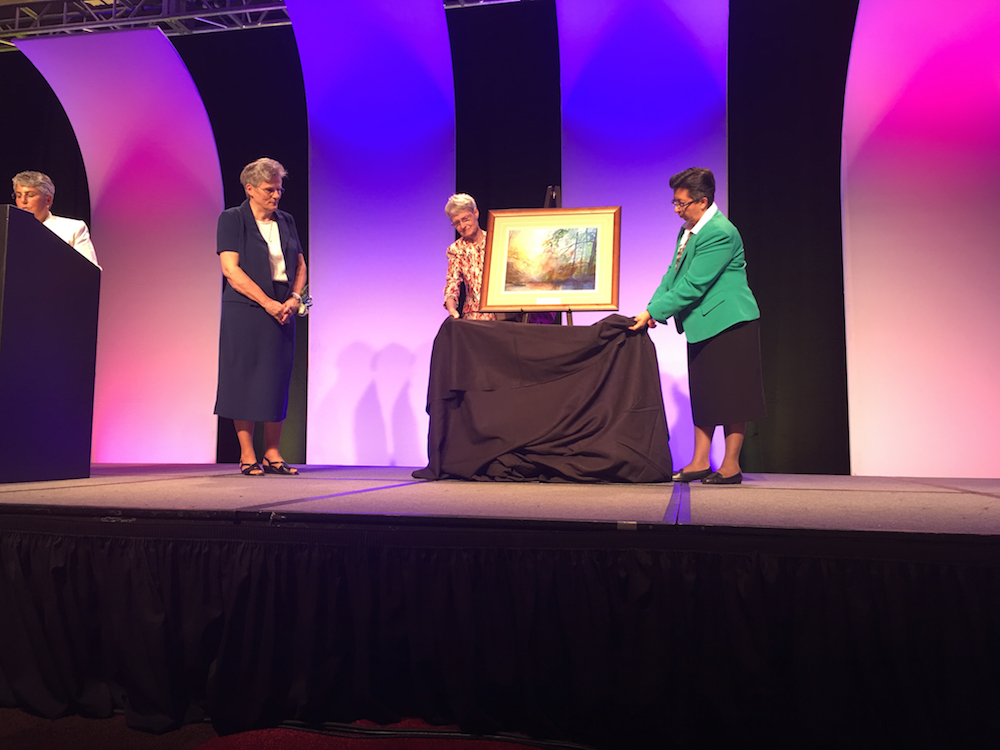 Speaking to Global Sisters Report, Pellegrino said LCWR is about to undergo a period of transition and potential organizational restructuring, and she's excited to be a part of it.

"I have felt all this year what a privilege it is to come into leadership in the conference at this time, because there is so much energy right now in the conference," she said. "And it's not that there was not energy before, but it is a different kind of energy and grace. So I feel such a privilege for this opportunity."

The banquet was also where Sister of the Most Precious Blood Janice Bader received the Outstanding Leadership Award for her nearly two decades of service at the National Religious Retirement Office (NRRO), most recently as the executive director. Bader stepped down from the position earlier this year after being elected president of her community.

Bader told GSR she didn't feel as if she had done anything to earn the Outstanding Leadership Award — "When I think of the people who have received this award in the past, a lot of them . . . have written books, have done all kinds of things. And I say to myself, 'I've just been doing my job,'" she said. But she seemed to be alone in that view.

In the video introduction that played before she accepted the award, Bader was hailed for taking the reins of the NRRO at a time when retirement planning in religious life was in "deep crisis." Bader is credited with not only helping religious communities get their finances in order, but also in turning around the NRRO itself.

The refrain of Bader's acceptance speech was "you know what to do" — the last words her mentor and "soulmate" former LCWR president Sister of the Most Precious Blood Andree Fries said to her before her death. But those words weren't just meant for her, Bader said. 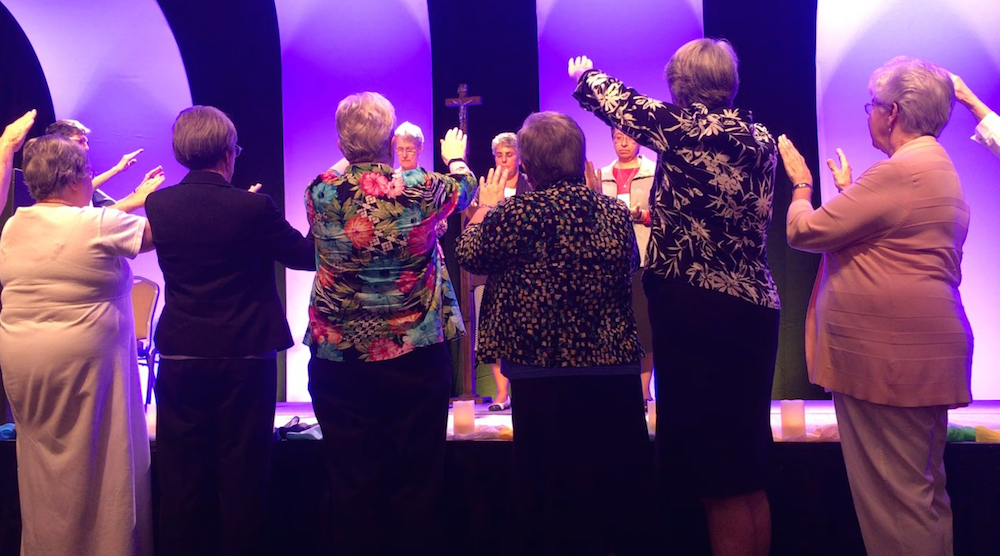 "I do believe that one of our key responsibilities as leaders is to say to our sisters and brothers, both individually and corporately, 'You know what to do,'" she said. "At times we may tremble with fear and say, 'No, not me.' And I believe God is saying to us, 'Yes, you. You were chosen to be a leader for this time, and the timing is not an accident. I am with you and you know what to do."

On Friday, LCWR membership also heard a presentation from University of Tennessee historian Shannen Dee Williams. Williams spoke on the history of racism in religious life, which set the stage for a justice action against racism.

*An earlier version of this story misspelled Maya's name.