After Sr. Angélica Segoviano, an Oblate of the Most Holy Redeemer, wakes up at 5 a.m. and gets dressed for the day in Guatemala City, she goes to the chapel for an hour of silence. Here is where she restores her mind and heart, she says, a form of self-care and preparation for what awaits her that day.

Then she visits the brothels.

Introducing herself as a social worker to the man in charge, Segoviano is able to visit the women who are prostituted, gaining their trust before they open up to her about their lives and worries. They often ask her to pray with them so that they get clients that day, which to them means being able to feed their children or care for their sick mother.

Though Segoviano's typical daily ministry is done solo, the Central American anti-trafficking network of women religious, Red Ramá, provides her and other sisters in this ministry with training and formation, including news and information on the issue in her region.

Similar networks of women religious combating human trafficking dot the globe, united under the umbrella of Talitha Kum, an intercongregational network of networks that facilitates collaboration between consecrated men and women in 76 countries. (Next year is its 10th anniversary.)

At a Cleveland retreat center Oct. 24-27, the U.S. Catholic Sisters Against Human Trafficking network brought together women religious throughout the Western Hemisphere to connect on their shared ministry. Presentations from all the networks, survivors as guest speakers, virtual classes, and group reflections allowed participants to share best practices and strengthen connections across borders.

"You can talk to them on the phone, that's one thing," said Margaret Nacke, a Sister of St. Joseph of Concordia and a co-sponsor of the U.S. network. "But what this has given us is a flavor, to look at who we are together in this hemisphere and how we can help one another."

Crossing borders, in the same room

Sisters and guests took the fabric butterflies on their tables and clipped them in their hair, on sweaters and nametags — a symbol of crossing borders to engage with one another. Headphones were linked to interpreters in the back of the room to bridge the four languages present: English, Spanish, Portuguese and French.

With every network presenting the realities from their regions — their efforts, their resources and approaches — a common theme among all, from Canada to Argentina, was the tie between trafficking and migration. Having roughly 60 sisters in one room meant neighboring countries could brainstorm ways their networks could collaborate.

"The trafficking networks are extremely well-organized, so we have to maintain our connections and work in networks. Otherwise we won't get anywhere," said Joanne Pundyk, a sister of the Holy Names of Jesus and Mary. Pundyk ministers in Masao, Brazil, a country whose border spans 10,500 miles and touches 10 countries. Much of what it borders is pure Amazonian forest with no population, let alone policing, making it "more susceptible to trafficking," she said. Brazil's anti-trafficking network is Um Grito Pela Vida (A Cry for Life).

And with Brazil's new far-right president-elect, Jair Bolsonaro, whose pro-torture and bigoted stances concern proponents of human rights, Pundyk anticipates a "harder time getting our work done," particularly with his antagonizing women, indigenous and LGBT people, who are most vulnerable to trafficking, she said.

"Some who are trans[gender] and want to have an operation to have physical changes, they're often lured, they're trafficked," she said. "They're being told they can earn a lot of money and have an operation, and when they get there, they're put into prostitution."

Sisters in Brazil and Colombia are both witnessing an influx of Venezuelan migrants crossing their borders and becoming easy targets for traffickers. Divine Savior Sr. Sandra Hernández, who ministers in Bogotá, Colombia, said this is one of the biggest challenges for Red Tamar, the country's network. It works to absorb into civil society the thousands of ex-combatants who, before the 2017 Colombian peace accord, had been living in forests and jungles.

"There aren't favorable conditions within education or health care because those resources were instead directed to weapons and state violence, exacerbating our social problems and especially for migrants and ex-soldiers," she said. "We have double the task."

Hernández said human trafficking is easily manifested in institutions for education, with children being high-risk targets due to frequent teacher strikes and protests that put students on the streets instead of keeping them in class.

With the risks of trafficking increasing "within a migratory context," she said, her network lately has been focusing on the new arrivals from Venezuela who come with health problems, injuries or unmet basic needs, "as they're usually led into prostitution that's masked as opportunity."

But labor trafficking remains a prime concern when it comes to Venezuelan migrants, who are often paid half the Colombian minimum wage. "It's a challenging job because we're dealing with a number of forms of human trafficking that can be as invisible as the extraction of human organs or as contentious as the rehabilitation of children soldiers, who we consider victims of trafficking."

Ministering in El Salvador, Guardian Angel Sr. Carmela Gibaja Izquierdo said that one challenge is maintaining the connection between all the countries that belong to Red Ramá. This is because they're all countries of origin, transit and destination for traffickers. And while parishes and bishops' offices are involved in the issue of migration, she said trafficking "is still secondary" and has "not yet been deeply penetrated" as a problem.

Adopting an "intercongregational, interinstitutional" approach to tackling human trafficking, Gibaja said, "is the only way to respond to the complex problems; the response can't be simple" — a stance that all who spoke to GSR shared.

A three-year project in Uruguay provided training and awareness-raising among locals, with the help of Red Kawsay, the network that includes Argentina, Paraguay, Peru and Uruguay. "The idea was to generate trained actors to be able to respond to the situation," said Oblate of the Holy Redeemer Sr. Sandra Ortiz. The network's goals in the coming year, she said, are to tackle borders and provide more service to victims.

"Participating in [this conference] helps strengthen what's being done in our networks, whether we're few or many," she said. "It's important to listen to different experiences and to be able to think about where one is and how we approach our realities, even if other places seem much more advanced than us or have different opportunities. It always helps to share."

Sometimes the network can feel like "a tiny little dot in a country so big" like Argentina, said Missionary Social Service Sr. María Silvia Olivera. Partnering with lay and civil institutions can be a way of covering more ground — an approach she was keen on learning while at the conference. "Maybe we can't copy exact prescriptions, but it helps to be exposed to how others do things."

The sisters in Canada, who belong to the network CATHII, indeed are considering adopting what the U.S. sisters shared in a presentation on training doctors and medical attendants to spot signs common among victims of trafficking.

"I think with CATHII we could do something like that," said Holy Names of Jesus and Mary Sr. Lise Gagnon. "Just as we already visit hotels, maybe we can visit emergency rooms, too, especially since the material is already there."

Why the sisters do what they do

When she was 14, Marlene Carson's middle-class family in Columbus, Ohio, welcomed a new couple moving into their neighborhood. Fully trusted by their neighbors, the couple's house became a hangout for kids after school; they'd invite Carson and her friends on little field trips, with each outing getting farther and farther from Columbus. When they invited the girls to New York City, Carson's mother said no, multiple times, until she finally caved, distracted by a family tragedy.

"We sang Christian songs all the way to New York City," Carson recalled of the drive.

After a day of shopping and tourism in the city, the girls were told to be back at the hotel at 8 p.m. to get dressed for a Broadway show. But instead, they were greeted with racks of see-through lace dresses, pasties and thongs.

When one of them protested, the man smacked her. That's when it dawned on 15-year-old Carson that they had gotten into something beyond their comprehension.

"That weekend, I was sold 27 times as a virgin girl raised in the church," she said. "That very first act, every dream, every desire, everything in me died that day. I never thought I'd be standing here telling anyone how great God is when something like this happens."

Carson and her friends were trafficked on the streets, in brothels and at professional sporting events.

Since escaping (the details of which she left out of her presentation), Carson founded Rahab's Hideaway, a restorative housing program for victims of human trafficking.

When asked the highlight of the conference, the unanimous response among all who spoke with GSR was hearing Carson and Flor Molina, a victim of labor trafficking who now works with sisters on this issue. It served as a reminder of why they do what they do, they said, particularly in a field where one doesn't necessarily see the fruits of their work or a happy ending on the other side.

For Kathleen Bryant, a Religious Sister of Charity who is on the board of the U.S. sisters' network and was on the event's planning committee, the gathering helped the group become "sisters among sisters in the hemisphere."

"What I love is the recognition that we're all about the same mission and we're angry about what's happened to children, to women, to boys, to men in labor trafficking, and that we really are convinced that we can make things different and create change," Bryant said.

The fact that just two sisters from Mexico pioneered Red Rahamim and were able to organize on this front reminded Bryant that "as Americans, sometimes we think we have to have everything first organized with a mission statement and the budget and all the rest." As one Mexican sister emphasized during their presentation, creating and sustaining Red Rahamim with little underpinning was possible because it was an "obsession."

The international coordinator of Talitha Kum, Comboni Missionary Sr. Gabriella Bottani, said that networks are also important for "bringing joy to a dark topic," as their respective communities tend to be unaware of the harsh realities these sisters witness in their ministry.

She noted that a crucial advantage in their coming together was "to recognize the diversity of charisms, to trust in one another [so we] can really share our experiences and our challenges and our suffering in these activities," she said. "But at the same time, [sharing] the hope and the ideas we have and the projects we're developing, supporting each other."

The last night of the Cleveland gathering was a cultural celebration, with every sister or group of sisters representing her country with food, costumes and trinkets, and demonstrating local dances or songs.

Bottani, however, was the sole sister from Italy, so she called on every attendee to dance with her as she demonstrated basic footwork and established a rhythm for all to follow. Her dance, in a way, was emblematic of the network she leads, bringing together sisters who moved together with her guidance, as laughs and trips and improvisations punctuated their efforts.

"We are writing the story of Talitha Kum together because we are many stories," she said. 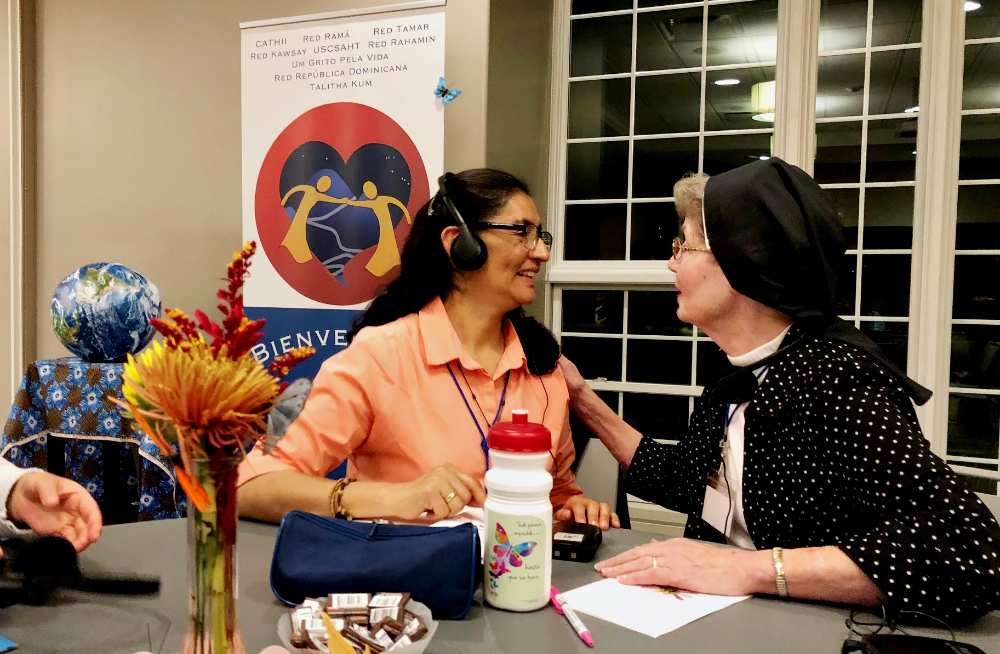 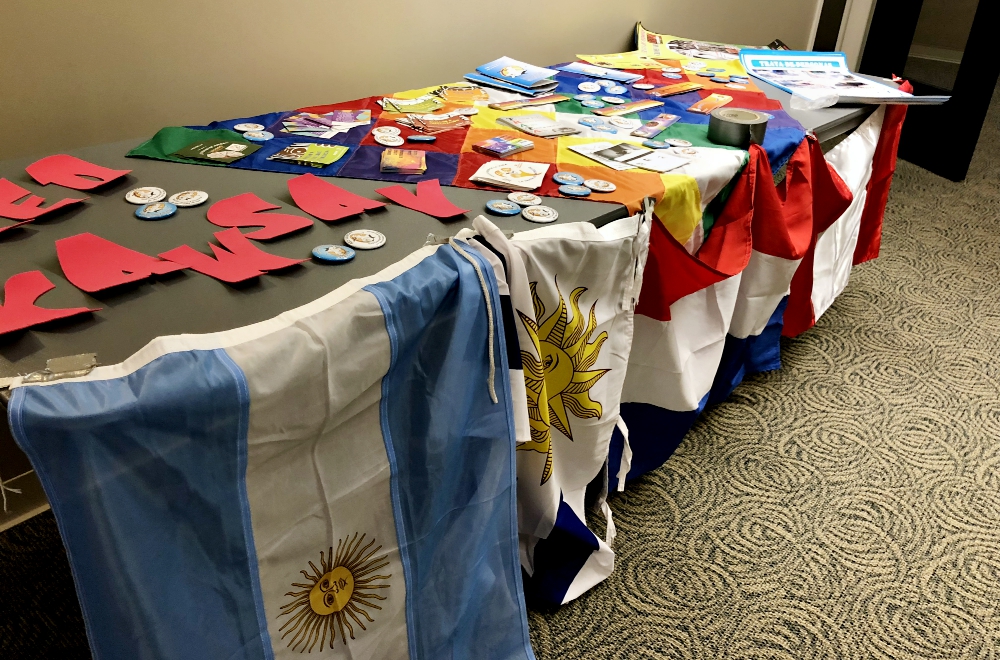 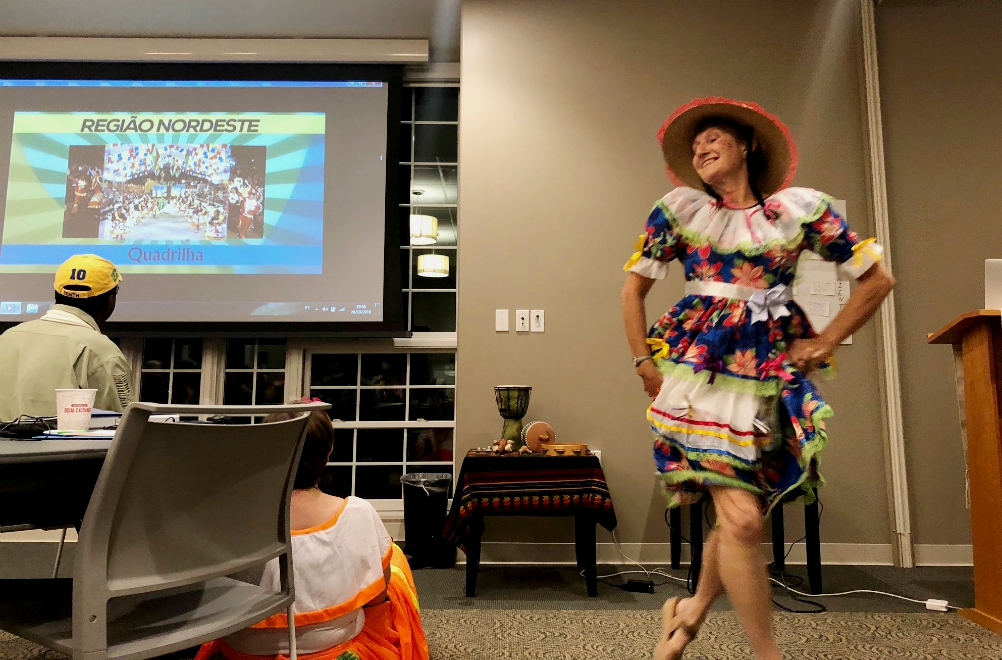 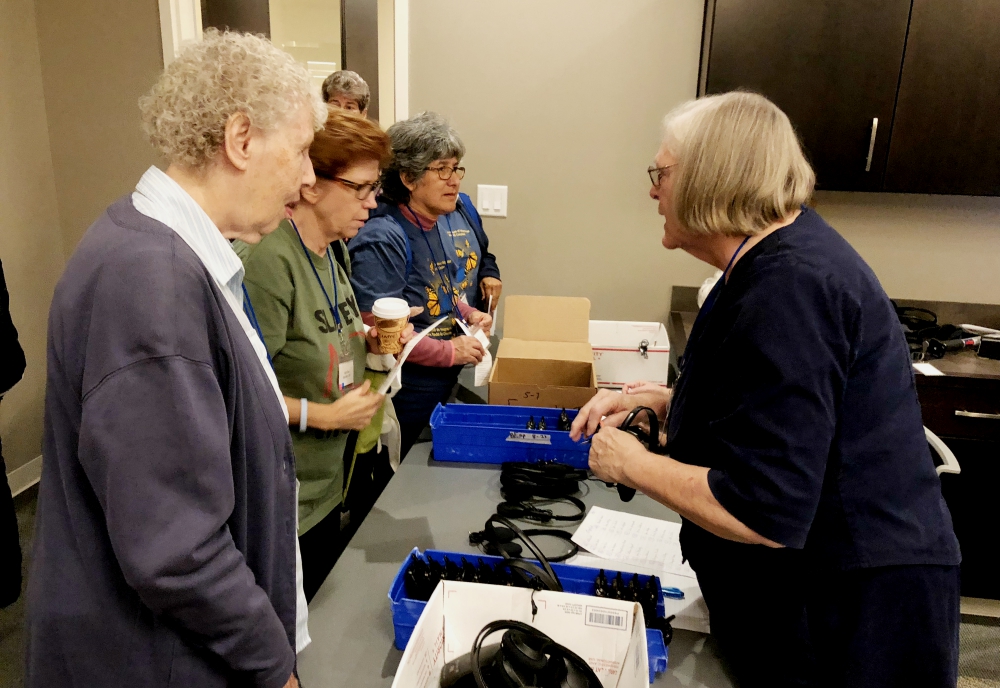 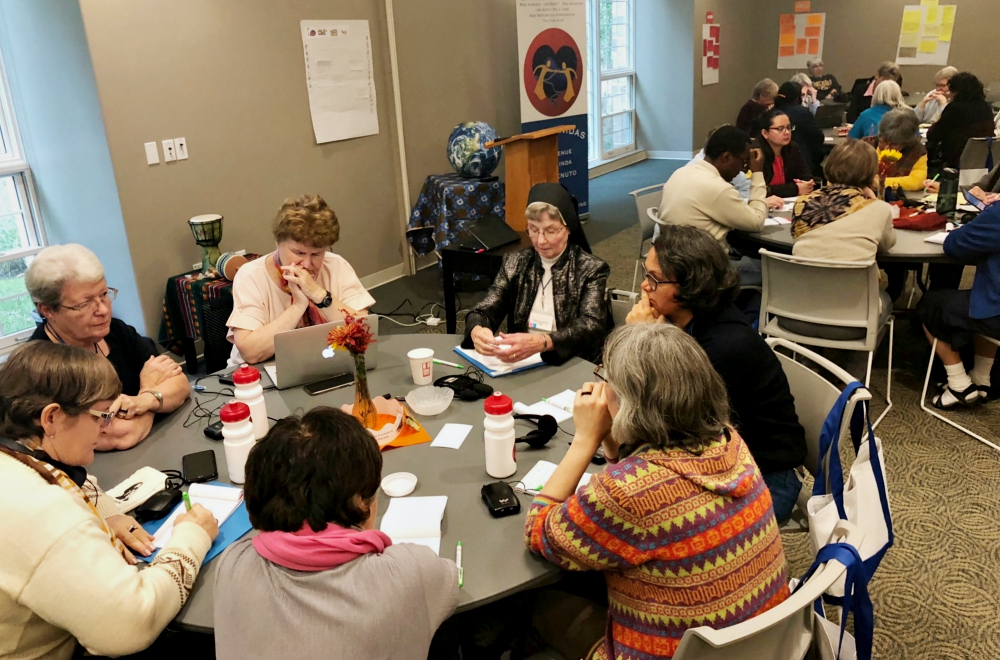 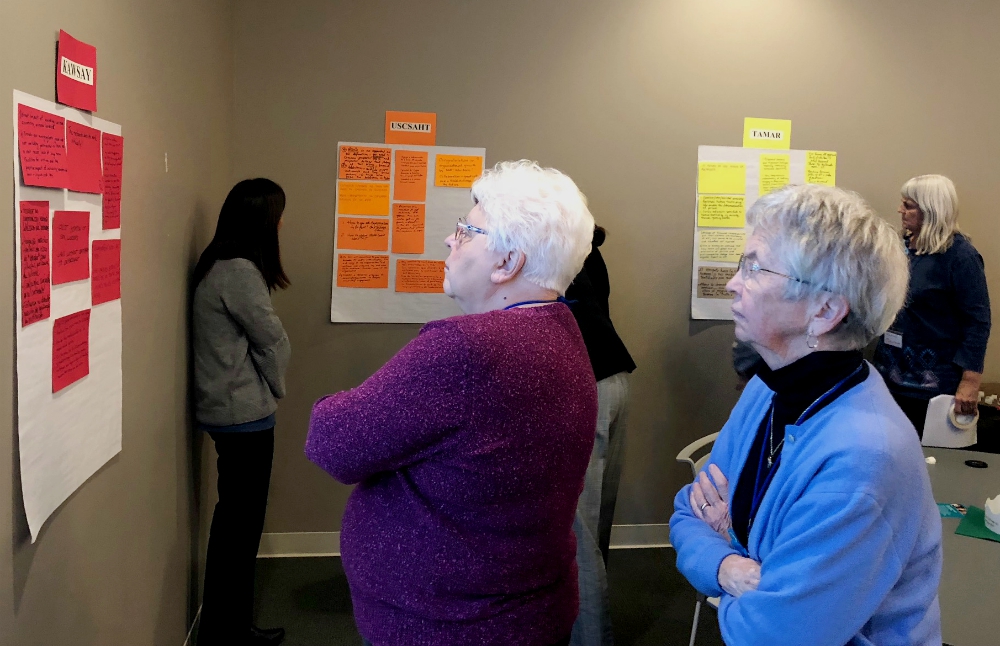 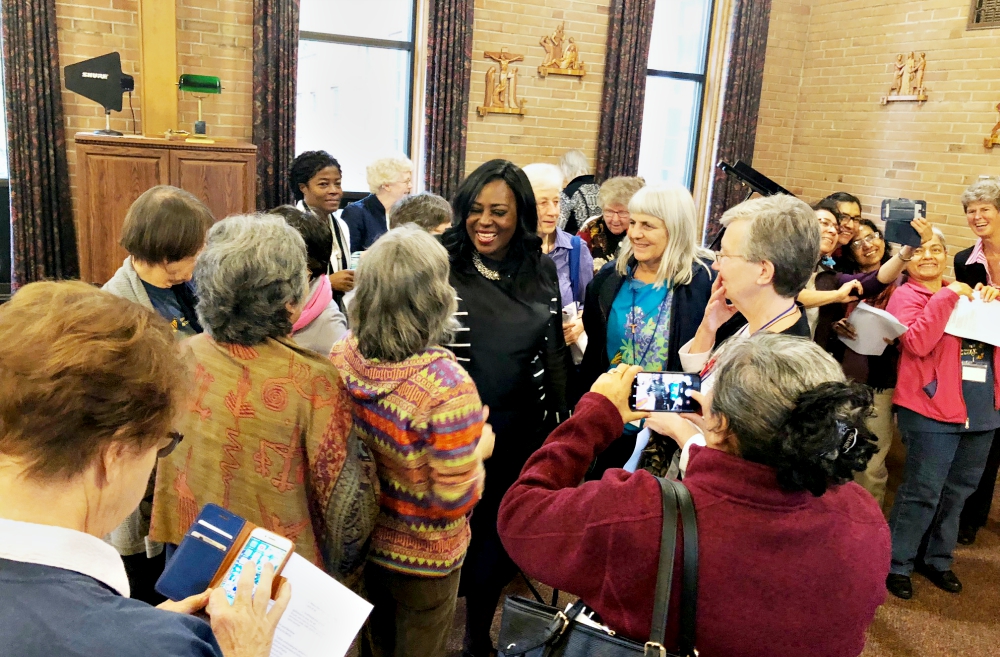 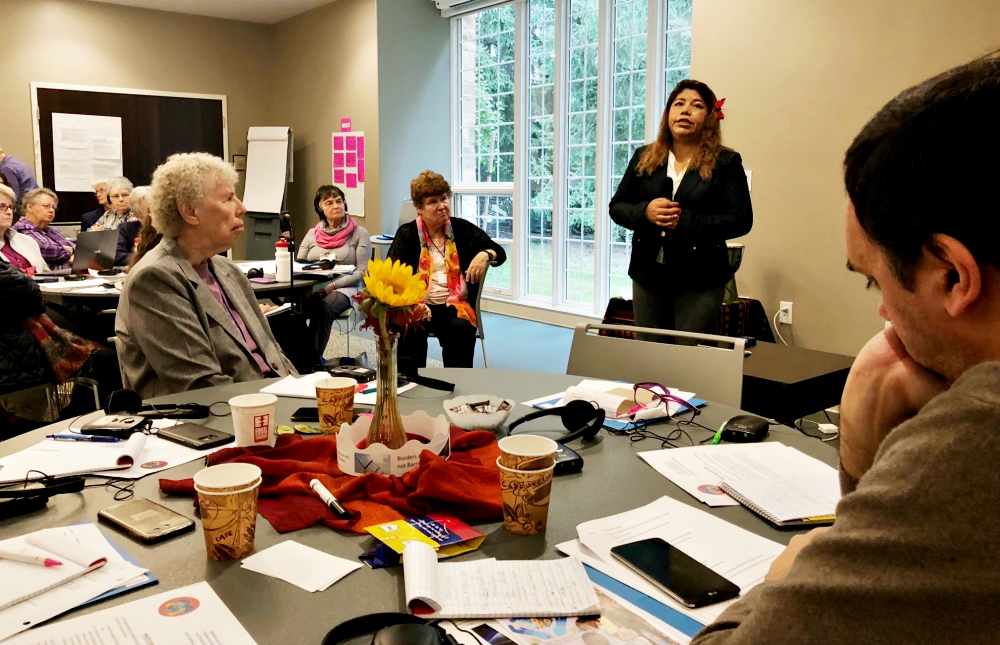 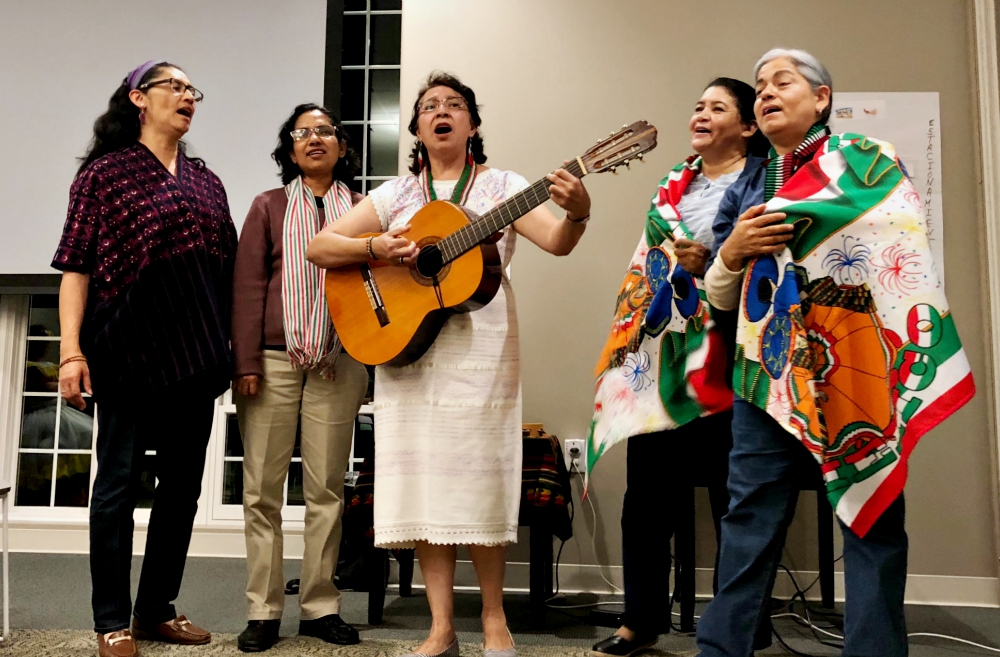 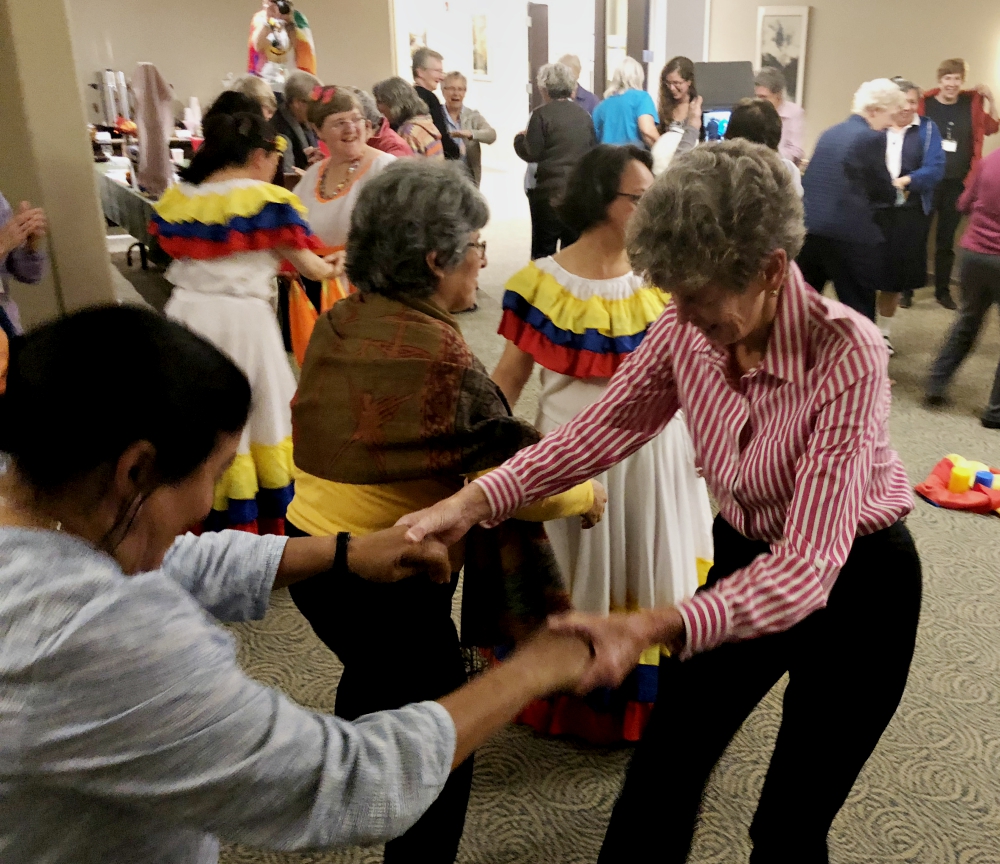