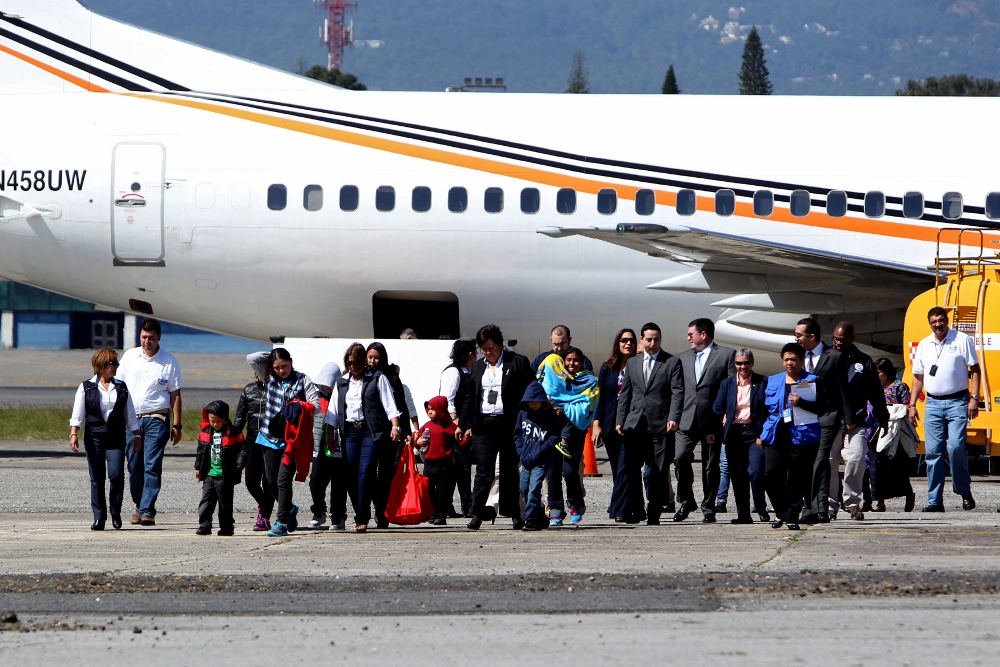 Four mothers and 10 children land in Guatemala City, Guatemala, Jan. 6 after being deported from the United States. The 14 people were deported after a U.S. court ordered a raid in Georgia. (CNS photo / Esteban Biba, EPA)

Those who work with Central Americans coming across the U.S.-Mexico border say the recent wave of federal raids to round up asylum-seekers for deportation is aimed at sending a message to other would-be immigrants: Don't come to the United States.

On Jan. 2 and 3, Immigration and Customs Enforcement officers conducted raids in Georgia, Texas and North Carolina, taking into custody 121 people to be processed for deportation.

Missionaries of Jesus Sr. Norma Pimentel, executive director of Catholic Charities of the Rio Grande Valley in Brownsville, Texas, said before the raids, her agency received up to 100 immigrants a day.

But after the raids, "we saw an immediate change," Pimentel said. "Overnight, it went to two, three, five people a day."

Most asylum-seekers at the southern border are fleeing violence in their home countries of El Salvador, Guatemala and Honduras. U.S. law gives them the right to an asylum hearing, and those found to be facing credible threats at home are entitled to entry and to take their asylum case before a judge.

Most receive a court date to appear for a hearing and are released, but some are detained at federal facilities in Texas and Pennsylvania. Pimentel's agency helps those released by border agents at a bus station in Brownsville, Texas.

Now, she said, the majority of those seeking asylum are going straight to the South Texas Family Residential Center in Dilley, Texas, to be processed for deportation, and only a handful are being released.

"I understand they're doing a new, speedy process to deport them," she said. "The people can hardly speak for themselves. Some don't speak English or even Spanish. They're scared and they're in this detention facility."

'Everything is about politics'

More than 100,000 Central Americans, including thousands of unaccompanied minors, came to the border seeking asylum in 2014 and 2015 — so many that the government reports there are nearly 80,000 asylum cases backlogged in the legal system.

The recent raids have brought criticism from advocates and a protest outside a detention center in California, but White House officials say the raids will continue.

Pimentel said one woman came to them fitted with an ankle monitor by border agents to track her movements but did not understand what it was.

"She thought it was a bomb they attached to her," Pimentel said. "She was frightened they were going to kill her."

Even more frightening: Immigrants tell Pimentel that people who have been deported to their home countries have not been heard from again.

"They're disappearing," she said.

"As I have said repeatedly, our borders are not open to illegal migration; if you come here illegally, we will send you back consistent with our laws and values," Johnson said in a written statement announcing the raids.

He said those arrested were adults and their children apprehended after May 1, 2014, who have exhausted their legal remedies and appeals. Advocates say Johnson misstates the case entirely, as they did not cross the border illegally, but turned themselves in and asked for help escaping violence.

"Jeh Johnson, which part of 'refugee' do you not understand?" asked Dominican Sr. Bernadine Karge, an immigration attorney and member of the Chicago chapter of the American Immigration Lawyers Association. AILA is one of four partners in the CARA Family Detention Pro Bono Project, which provides free attorneys for asylum-seekers.

"They're not sneaking in the windows, they're standing at the gates, asking for asylum," Karge said. "But everything is about politics. It's not about people, unfortunately."

"I went back for two weeks in October, which was powerful, to put it mildly. It's taken me three months to recover from that. Now I'm going back for more," she said.

Karge said contrary to Johnson's statement, many of those arrested in the raids have not exhausted their legal options, as they were never notified of the hearings where they were ordered — in absentia — to be deported. Because they were staying with friends or relatives or other families who took them in, the legal notices often never reached them.

"It's just a whole other level to the madness," she said.

'That this would be a priority is troubling'

Ashley Feasley, director of advocacy for the Catholic Legal Immigration Network Inc. (CLINIC), said some of the raids had problems with warrants, and other cases have shown due-process concerns. CLINIC is also a partner in the CARA pro bono project.

CARA attorneys were able to work with eight people arrested in the raids; in four of those cases, they were able to get a stay of the deportation order because of questions about the validity of the government's case.

"That makes you wonder about the validity of the other cases in the 121 they arrested," Feasley said. "It also flies in the face of the president's own statement [in November 2014] that we should be deporting 'felons, not families.' These were women with children. When we're looking at an era of fiscal restraint and limited resources, that this would be a priority is troubling."

It's also troubling that the raids are statistically meaningless, she said. Officials estimate there are about 100,000 asylum-seekers who have been released into the United States while awaiting hearings. Arresting 121 of them only sends a message.

"Certainly, they're intending to send a message to women and children of deterrence," Feasley said. "And when they continue to deny the large, systemic forces causing forced migration, sending women and children fleeing from Central America, while sending a message of 'Don't come here,' it's even more troubling."

Feasley said one bright spot is the desire of women religious to help in any way they can.

"They have been the rock of this movement," she said. "They've been the heart and soul from the Catholic advocacy side of things."

Traveling to Dilley with Karge later this month will be Mercy Sr. Marlene Perrotte, who also works with AILA. She said the legal system is mistreating these immigrants from the start, as they should be given refugee status rather than forced to apply for asylum.

"There is no question these folks are coming from countries of extreme violence their governments cannot control, so they should be put under temporary protective status," Perrotte said. "That would protect these very, very vulnerable people."

She said the efforts — especially the raids — are misdirected.

"These raids really need to be denounced," Perrotte said. "This shows that the Homeland Security Department, that they are looking at the most vulnerable people — women with children — as the biggest threat to our security. Is that really where we want to spend our money? When we already know where they are because of the ankle shackles they wear?"

Karge said the work is rewarding but can take its toll.

"They're very young. You've got a [detained] 20-year-old with a 2-year-old," she said. "She's dealing with the trauma of a young mother hauling a child halfway around the world and trying to keep your wits about you."

How do you separate the humanitarian and emotional side from the legal side in a complicated, high-stakes area of law?

Texas diocese responds to immigrants' need in surge of children