Sr. Bertha Lopez was buying 55-pound sacks of rice, when the cashier asked: "Where do they want the rice? For Guatemala or for whom?"

Lopez informed the cashier, "We're buying it to feed our migrant brothers" who are stranded in this city near the Guatemala border. The cashier responded: "Why are you doing that? What you're doing isn't right."

Last fall, locals in southern Chiapas state welcomed the caravans of migrants crossing into Mexico from Guatemala and carrying on northward to the U.S. border. They offered everything from food and drink to clothing and shoes to the caravan travelers, who often included children.

Parishes throughout the Diocese of Tapachula mobilized to meet the needs of thousands of mostly Central American migrants — many fleeing violence, poverty and drought. Lopez's congregation, the Guadalajara-based Missionaries of the Resurrected Christ, tended to the wounds of weary migrants in a mobile medical clinic.

But many locals no longer welcome migrants in Chiapas. Municipal governments, meanwhile, have shunned them by blocking access to town squares, where members of caravans often slept and sought basic services. Local government officials complain of being forced to shoulder security, sanitation and cleanup costs.

Donor fatigue has set in here in Mexico's poorest state, where priests say people initially responded to images of impoverished migrants fleeing their countries, but became jaded as the caravans keep coming.

"People no longer respond to the immigration issue," said Fr. César Cañaveral Pérez, diocesan director of migrant ministries in Tapachula. "(They) no longer help out. It's to the point that in parishes we no longer ask for assistance for migrants."

Lopez described a "climate of apathy" and said of the situation: "If (people) see some migrants, they close their stores. This sadly started growing with the media providing negative news."

The apathy comes as Mexico cracks down on migrants moving through the country and President Donald Trump complains Mexico is "doing nothing" to stop migration — even though it has detained and deported more Central Americans in recent years than the United States.

"I had heard the president was going to give us visas. And with a visa, we thought we would cross all of Mexico without any problems," said David Solorzano, 23, a farmhand who fled El Salvador after receiving gang threats. He had hoped to travel north with his aunt.

But Solorzano opted for voluntary repatriation to El Salvador. He expressed weariness with the endless walking. He said immigration checkpoints dotted the highway through Chiapas. A caravan with which he was traveling was raided by the police — forcing him to flee into the hills — and he says he was punched in the mouth during a robbery attempt while riding atop the train.

"I'm scared of returning to my country," he said from a shelter in Ciudad Ixtepec, some 250 miles from the Guatemala border. "But there's nothing here for me."

Caravans can no longer travel openly through Mexico, prompting some migrants like Solorzano to return to a risk ride north: the "Bestia" train — so named for the way it maims the migrants falling under its wheels.

Migrants — including many from Cuba, Haiti and African countries — continue arriving, but cannot obtain safe passage documents, which previously were routinely issued.

Haitian migrant Pierre Saint Paul, 45, traveled north from Chile, where he had lived for two years, but he found it impossible to obtain the proper papers. He was hoping to make it to Mexico City or Tijuana, where he had relatives who had arrived earlier in the decade.

"I'd just like a better life for my life and son," said Saint Paul from a shanty in which he slept.

Tensions in Tapachula have simmered, with migrants storming immigration offices. At least six mass outbreaks have occurred at the local immigration detention center.

"There are people spending months there," Lopez said. She warned of health problems such infections and diarrhea in children due to a lack of sanitation.

The Missionaries of the Resurrected Christ provide one meal a day of rice with eggs or potatoes or a vegetable and a pastry to 2,500 migrants outside the migrant detention center, though supplies some days have run short, and calls for help have gone unanswered.

Stories circulate in the media and on social media sites of migrants committing crimes and being gang members.

The April 2019 National Survey of Urban Public Security showed residents of Tapachula considering the city the least secure in the country, with perceptions worsening since the caravans started arriving in October.

Police in the town of Huixtla circulated the streets with a loudspeaker screeching, "a dangerous caravan" is about to arrive and warning people to stay inside.

Migrants traveling in recent caravans say they sustained themselves on nothing more than mangos growing along the roadside and water offered by civil protection officials. State police ticketed truckers offering rides in empty trailers and on flatbeds.

Civil protection officials offered water as migrants walked under the scorching-hot sun, while the Federal Police provided an escort — at least until April 23, when police officers and immigration officials stopped a caravan and detained nearly 400 migrants.

Locals in the towns heading north from Tapachula voice frustration with the steady arrival of caravans.

In the municipality of Mapastepec, Consuelo Santiago allowed caravan travelers to charge their phones for free at a small restaurant on the town square. But she expressed some displeasure with caravans occupying the space outside her business, and people donated so much food and clothing to the migrants that not all of it was consumed — causing people to consider the travelers ingrates.

"People don't see the need to throw their money in the trash," she said. "The only ones helping are the church."

Signs of empathy still emerge in the region. In Mapastapec, parishioners at the St. Peter the Apostle church traditionally break bread on Holy Saturday and Easter Sunday. But this year, they provided meals for 2,000 migrants passing through town instead. 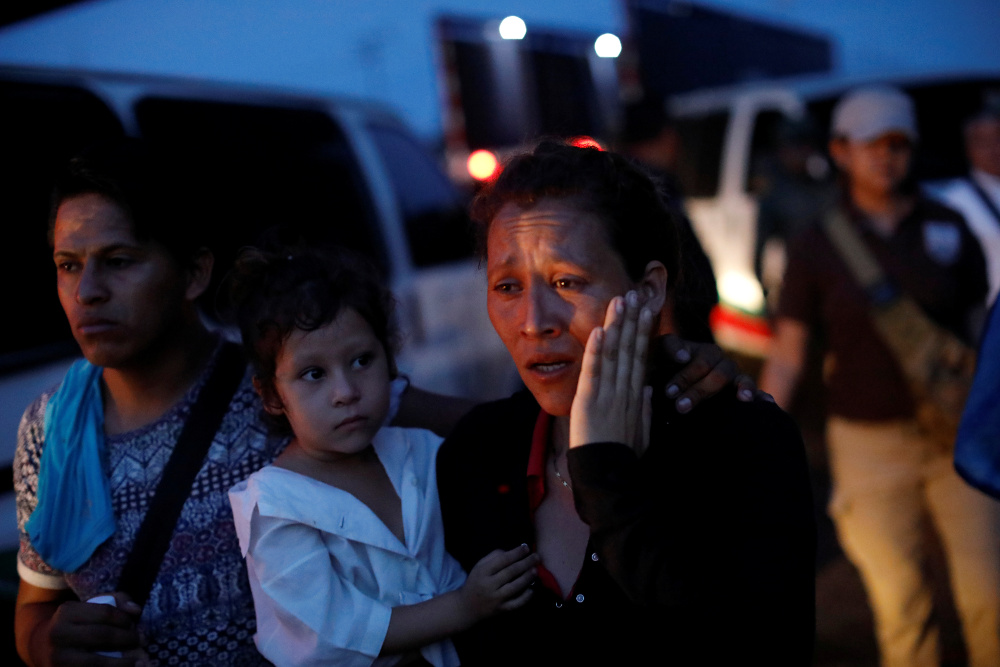