SpongeBob SquarePants and his buddies enchant three giggling young boys kneeling on the floor in front of the TV. Supper plates rest on newspaper placemats. It could be a Friday after-school scene like any Canadian family's, but this one's uniquely theirs: SpongeBob speaks in Arabic, and the boys' gentle ease and comfort in their new apartment in Canada began just a few months ago.

Mahmoud and Amani and their three children, Baara, 8, Mohamad, 7, and Ahmad, 4, moved from Lebanon to London, Ontario, on June 13 thanks to a joint sponsorship between the Canadian government and St. Michael's Roman Catholic parish in London, helped by London's Sisters of St. Joseph in Canada. The family is part of Canada's Blended Visa Office-Referred Refugee Program, or BVOR, which means the United Nations' refugee agency identified them for resettlement and the government and private sponsors split support for their first year in Canada.*

Now known for its swift immigration response to the Syrian refugee crisis, Canada accepts more Syrian refugees than any other country. Immigration, Refugees and Citizenship Canada (IRCC) reported that the country welcomed more than 33,000 Syrian refugees between November 4, 2015, and mid-October 2016.

Catholic congregations across Canada sprang to action to help the refugees, setting up trust funds to sponsor children, like the Basilian Fathers in Toronto; sponsoring families, like Ursulines of Jesus in Chatham, and Jesuit-run parishes in St. John's, Halifax, Toronto, Guelph and Winnepeg; even, like the Sisters of Sion, educating themselves and their communities about Islam, the religion most Syrian refugees observe.

The London diocese, which spans multiple counties throughout southwest Ontario, recorded 325 sponsored refugees from January to mid-October 2016. This is far above their previous yearly average of 98 sponsored refugees. Emman Moynahan, communications coordinator for the diocese, said their refugee ministry relates the jump to the influx of Syrian refugees, but parishes and congregations there have sponsored many from other unstable and war-stricken countries for decades.

Mahmoud, Amani and their sons left Syria, their homeland, for Lebanon about four years ago to escape the civil war. Mahmoud worked construction part-time as they waited to find a better home for their family. They were randomly — and, they say, luckily — paired with St. Michael's Roman Catholic Parish through the BVOR sponsorship program, receiving help from the Sisters of St. Joseph in every way.

The sisters say welcoming and supporting refugees is part of their work toward filling "unmet needs" in the world. Sr. Ann Marshall formed a Core Refugee Committee with help from other sisters in her congregation in 2014 to celebrate the Year of Consecrated Life. With funding from their congregation, they continued the work through Pope Francis' Year of Mercy. Marshall said their community budgets $30,000 annually to sponsor a family of three, and the government contributes about $12,000. Sponsorships are possible with donations and support from the sisters' Core Refugee Committee, which is made up of lay volunteers who help with things like budgets, bank accounts and health care protocol.

"We go over what we need [to budget] because there's all kinds of incidentals that you're unaware of until they arrive here," Marshall said.

When the apartment that the London sisters secured for Mahmoud, Amani and their family wasn't ready as expected, the family lived with the sisters in their residence for at least a month. The children enjoyed swimming in the pool as they began English lessons with the sisters. The family cooked their halal meat as they observed Ramadan, following their Muslim faith within their new Catholic surroundings.

Communicating can be a struggle for newcomers whose first language is not English. St. Joseph Sr. Maria van Leeuwen laughs thinking about sisters and the family interacting in gestures until translators help with details.

"The first couple days, it's kind of frustrating. You think, 'How am I going to explain this, how am I going to say it?'" said van Leeuwen, the congregation's lead refugee support. Thankfully, two staff members speak Arabic and can help when a family first arrives. Otherwise, the sisters rely on parishioners who speak Arabic to help translate.

Nearly five months after their move to London, Mahmoud and Amani welcome van Leeuwen and other volunteers to their home for help with things like responding to letters and bills they receive in the mail. While Mahmoud and Amani are in daily English classes, their communication remains limited.

However, the boys pick up new words quickly. They have deep affection for van Leeuwen and her team of volunteers.

Van Leeuwen didn't stumble into her role; she sought it out. As an immigrant herself, van Leeuwen understands what these families go through, arriving to a new place with new culture and language.

When van Leeuwen was 17, her family of 10 left a rebuilding, post-World War II Holland in April 1955. She remembers the bad storm on their ship ride to Canada, sleepless nights traveling by train from Quebec City to London, and helping their father with the immigration process once they arrived.

Van Leeuwen has spent the last 34 years committed to helping immigrants settle into their new homes in Canada.

Van Leeuwen said joint sponsorship opportunities from the government mean churches and individuals are more likely to support refugees. However, she is concerned that the expedition of Syrian refugee arrivals will slow down applications from other countries.

"I feel other refugees should not suffer as a result," she said. "Some of them are in very desperate situations, too."

The London diocese has welcomed refugees for decades. Statistics they've gathered show that congregations and parishes in the diocese sponsored more than 1,600 refugees since 2000, but sisters recall many more in previous decades.

The Sisters of St. Joseph in Hamilton currently sponsor a mother and two sons from Myanmar. The 19- and 20-year-old sons were born in a refugee camp in Thailand and spent their lives there. The sisters also stay connected to a 28-year-old refugee they sponsored from Eritrea who left her entire life behind to start anew in Canada.

Marshall and van Leeuwen say sponsoring refugees used to be quite different.

During the 1980s, when more refugees came from Latin America, Marshall said they would receive calls from immigration workers at the Canada-U.S. border, explaining that there was a family who needed a place to go. The sisters rallied, finding refugees a place to stay and helping them with the immigration process. Today, most sponsored immigration processes happen while the refugees are still overseas, especially when it comes to people from Syria.

It's not as easy as it looks

Van Leeuwen said the families she works with come from "different but similar" situations: "Corruption in government; absolute dictatorships, where if you say one word or if you have money . . . it could be like civil war, too, when both sides are after you."

She's seen the refugee immigration process change over time, and she said it's easier under Prime Minister Justin Trudeau's new government, but some difficulties remain.

Families receive the Canada Child Tax Benefit to feed their families, but aid doesn't start for two or three months after their arrival, van Leeuwen said. This could mean families need to get their meals at a local food bank until their benefits kick in, she said.

Nancy Chan, a communications adviser for IRCC, said changes this year in the Child Tax Benefit mean additional support for families over a year, but the government expects sponsors to be responsible for families' immediate needs when arriving in Canada.

Changes in political power over the years mean new ministers of immigration, refugees and citizenship; any letters or petitions van Leeuwen writes for certain refugee claimants have to be started all over again.

While congregations appreciate the government's pledge to Syrian refugees, there have been delays and procedural frustrations.

In an open letter to the minister of immigration, Bishop Douglas Crosby of Hamilton, president of the Canadian Conference of Catholic Bishops, expressed concern about how and why refugees are delayed by bureaucracy. Citizenship Immigration Canada reports that there are currently 22,396 applications in process across Canada and 2,998 refugees waiting to travel to Canada since their applications have been finalized.

In his letter, Crosby said Canada's positive publicity for accepting refugees comes from overwhelming community support. He asks the government to "deepen the integrity of Canada's resettlement program" and expedite the process of Syrian families' applications.

Chan said the department appreciates communities' willingness to sponsor refugees but called the process "complex," since working to bring refugees involves many factors outside of their control, like "establishing identity, addressing security concerns as well as logistical challenges."

Their first goal was to process the initial 25,000 Syrian refugees promised, which they accomplished by bringing in additional staff and resources, Chan said. After that "blitz period," they aim to finalize applications submitted before March 31, 2016, by the end of 2016 or early 2017.

Crosby said applications from other war-stricken countries should be processed quickly, too.

"It is neither reasonable nor fair for an Afghan family in Pakistan to wait 75 months, or for an Eritrean refugee in Egypt to wait 55 months, to have their sponsorship applications processed to completion: this is both cruel and counterintuitive to the nature of a life-saving program," he wrote.

Chan said this delay is because of a backlog of applications, since before 2013, there had been an unlimited amount of privately sponsored refugees. These applications are still being processed, but Chan said they hope to catch up soon, as the department placed an annual cap on the number of applications starting in 2012.

"We are aware of the long wait times in various missions and are taking steps to reduce those inventories and improve wait times," Chan wrote in an email.

St. Peter's Cathedral Basilica in London experienced a long delay in receiving their sponsored family. Deacon Len Hughes said his parish signed on to BVOR and were told a Syrian family of 10 would arrive in December 2015. They rented and readied an apartment at that time, but the family didn't arrive until June 2016. Hughes said they prepared based on "every indication we had because they were a high priority family."

Chan said the IRCC acknowledges disappointment from sponsors like St. Peter's Cathedral Basilica, but that the response to the crisis had never stopped, and continues; it all just takes time.

Hughes found the positive in the delay: It gave his community ample time to organize a proper welcome.

The fresh start these families seek is why parishes and congregations commit to making the refugees' arrival as smooth as possible. The sisters say they are proud to welcome those unlike themselves.

"All of us — sisters and these that we bring, these newcomers into Canada — all of us to learn about each other and to be open and to be accepting of differences," Marshall said. "It's a very wonderful opportunity, and we're all growing as a result of it."

*  Editor's note: This family's last name has been withheld to protect their privacy. The story has been corrected to reflect that St. Joseph Sr. Maria van Leeuwen was an immigrant and that Mamoud and Amani's family was sponsored by the Canadian government and St. Michael's Roman Catholic parish and helped by the Sisters of St. Joseph in Canada. 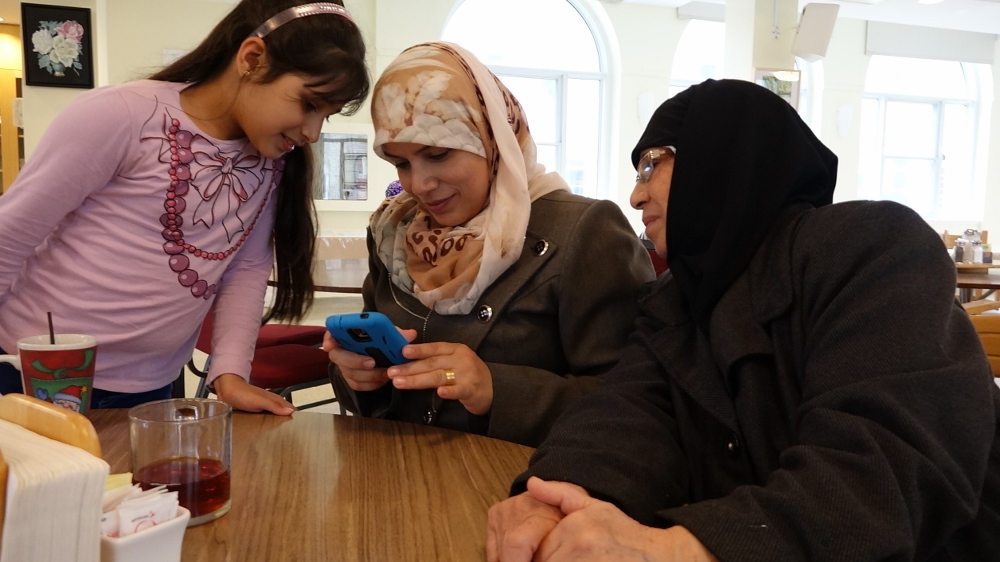 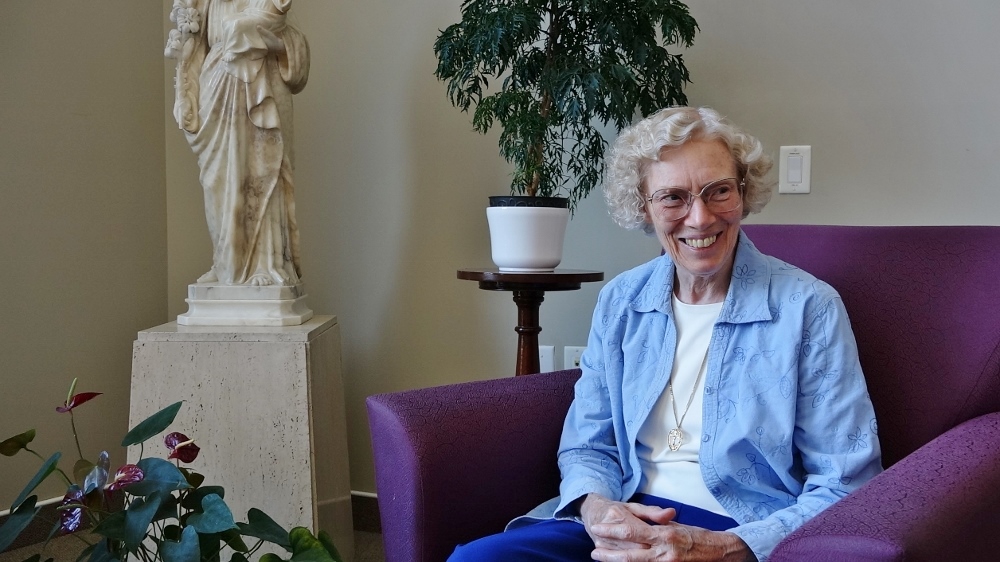 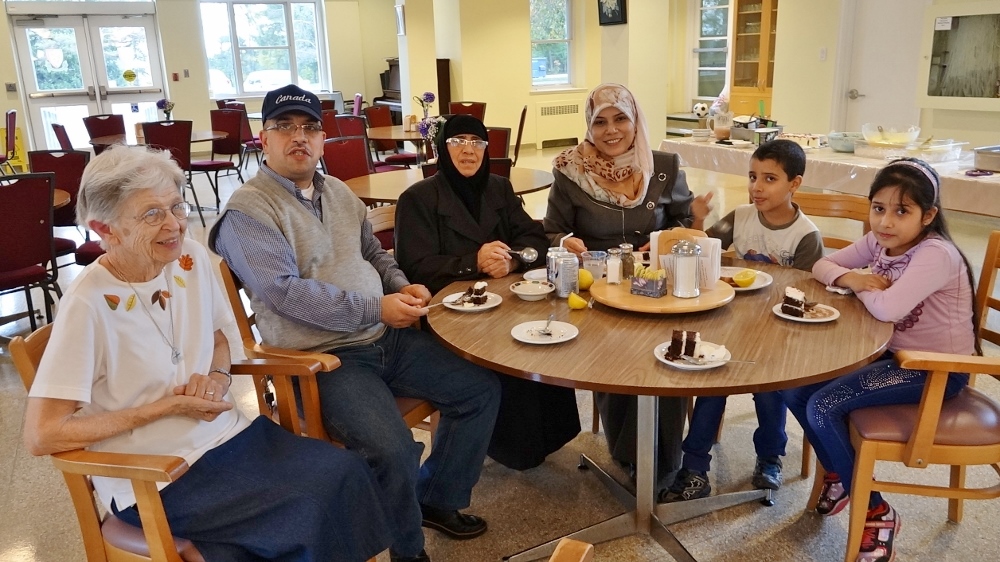 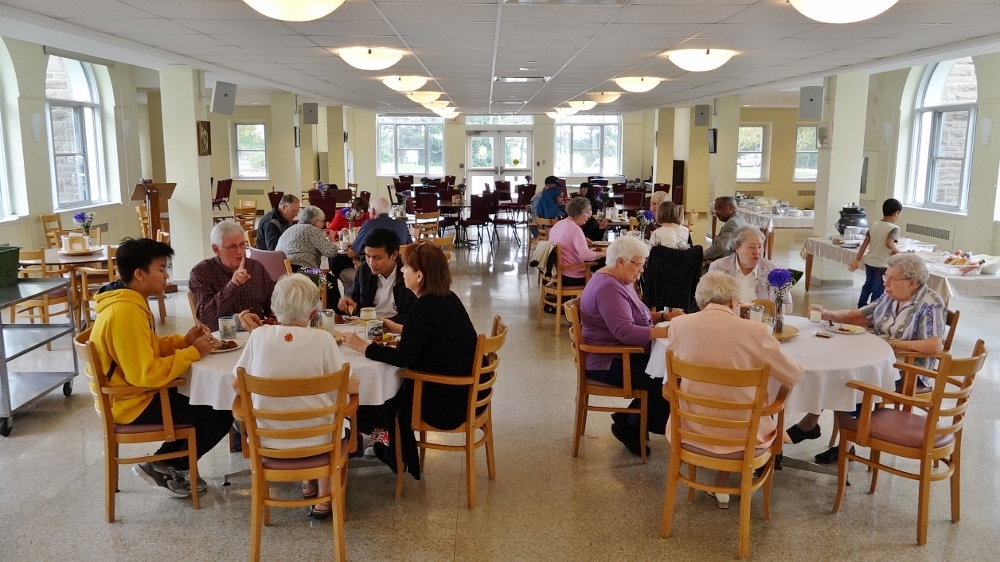 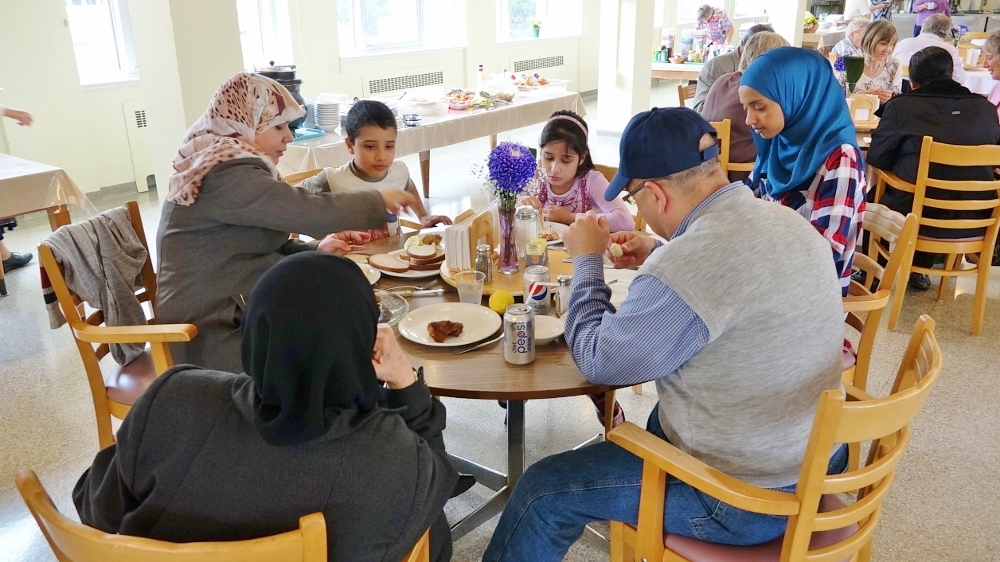 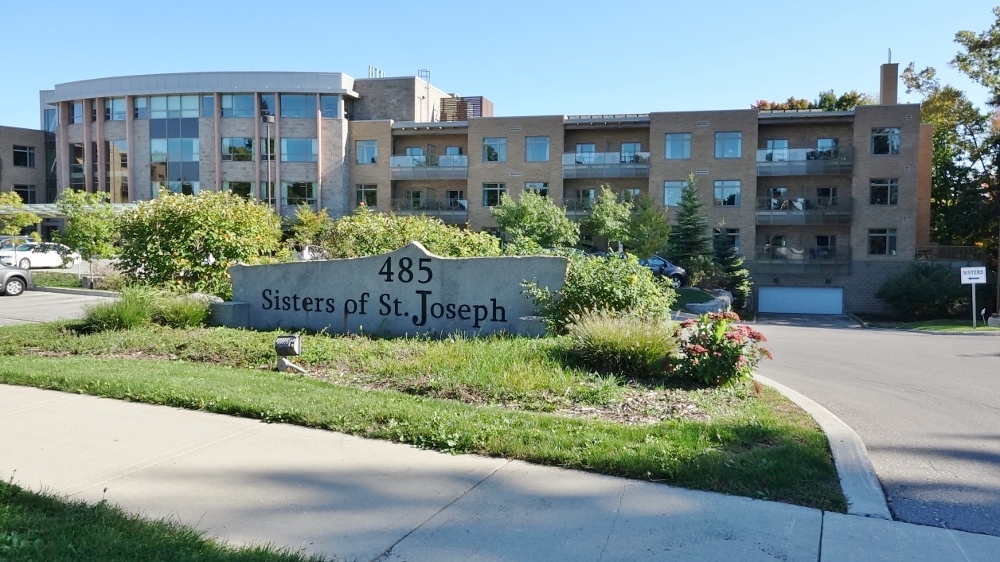 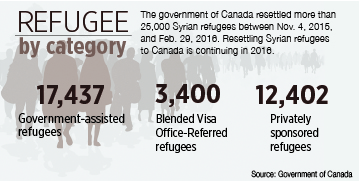 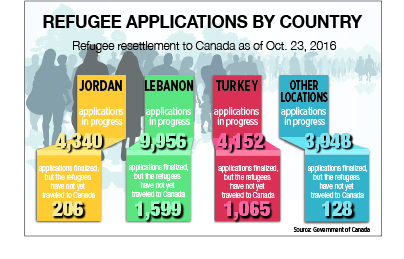