Sr. Mary McCauley remembers getting a call at 10:03 a.m. on May 12, 2008, telling her that local police and federal immigration agents with military-style weapons and riot gear were at a nearby meat-processing plant. They would arrest 400 men, women and teenagers in what was then the largest single workplace immigration raid in the U.S., disrupting hundreds of lives and changing the town of Postville, Iowa.

The raid had begun just minutes before. McCauley, a Sister of Charity of the Blessed Virgin Mary and pastoral administrator of St. Bridget Catholic Church and two other nearby parishes, rushed to the Agriprocessors kosher meat processing plant to look for people she knew. But workers were being loaded onto buses behind the plant and couldn't be seen. Families were separated, with spouses and children not knowing where their loved ones had been taken or if they would ever see them again.

McCauley returned to the church where already dozens of people were milling around. She and others who arrived to help quickly realized that people feared being arrested if they went home. "We said anyone who's afraid to go home can come to St. Bridget's," she said. "That night we had over 400 people in the church."

On Friday, May 11, 2018, more than 300 people packed St. Bridget, this time to mark the 10th anniversary of the raid and to dedicate themselves to enacting change so similar raids do not happen again.

They face a mounting challenge: On April 5, federal agents raided Southeastern Provision, a meatpacking plant in Bean Station, Tennessee, arresting nearly 100 undocumented workers, and the Trump administration has said it plans to at least quadruple the number of workplace immigration raids conducted. On May 9, agents raided a pre-cast concrete plant in Mount Pleasant, Iowa, about 160 miles south of Postville, arresting 32 undocumented workers. And the administration has said it plans to separate families caught crossing the border.

An act of terror

"This town has held thanks to the help of so many," Fr. Nils de Jesús Hernández told the interfaith prayer service. "But we desperately need comprehensive immigration reform. The system is broken."

Hernández is pastor of the Trinity Cluster Catholic community, which comprises the Catholic parishes in Postville, Monona and McGregor, Iowa.

The interfaith prayer service featured an imam, a rabbi, and clergy from the Lutheran and United Methodist churches.

The raid was an act of terror, said Bishop Steven Ullestad of the Northeastern Iowa Synod of the Evangelical Lutheran Church of America. "Ten years ago, the United States government invaded my hometown," Ullestad said. "Children — Latino, Latina and Anglo — were terrorized. School classrooms were virtually empty, cupboards went bare. ... Today, we remember the terrorism imposed by our own government."

Sometimes advocates for immigrants are accused of working on their behalf only because the immigrants are people of faith, but that is not the case, said Archbishop Emeritus Jerome Hanus of the Archdiocese of Dubuque, Iowa.

"I say no, we are doing it because they are created in the image and likeness of God," Hanus said. "I remember especially the parents, the fathers and mothers who came here to provide for their children. I remember their suffering."

Among those who suffered was Pedro Lopez Vega, who was in seventh grade when he and his classmates heard the helicopters. His mother, Consuelo Lopez, was among a handful of mothers who, when they were arrested, said they did not have children because they were afraid federal agents would arrest them, too. So she was jailed for five months and then deported back to Mexico. Women who said they had children had to wear ankle monitors.

It was about a year before Lopez was able to get a visa that allowed her to return to Postville, her family and to work, she told Global Sisters Report, with Lopez Vega translating for her.

"The journey coming back was very emotional, coming back to the place where it all happened," Lopez said.

Today, she is again working at the processing plant. It closed within a year after the raid, but was purchased by new owners and reopened, now called Agri Star.

"When you don't have anywhere else to work, you don't have a choice," Lopez Vega said. "The first couple of months were very hard for her, the sounds of the raid and everything came back." Lopez Vega has since graduated from college and is now working to enter law school.

Many in Postville say the town itself has come back, despite the devastation caused by the raid. Somali immigrants have moved in to take some of the jobs left open by the deportations, and the town is home to two synagogues, a mosque, and several Christian churches.

Postville had learned to embrace its diversity, only to have ethnic and religious divisions reopen after the raid that needed to be healed, said Aaron Goldsmith, who owns Transfer Master, which makes customizable hospital beds. But heal Postville did.

With the sudden loss of nearly 400 people and the closing of the town's biggest employer, the economy cratered. Goldsmith said the city couldn't make its debt payments and had to take emergency loans that have only recently been paid off. Banks foreclosed on 50 or 60 houses, he said, and the ripple effects were felt throughout the community.

Goldsmith's business was in the middle of an expansion when the bank pulled its financing, saying there was no longer any equity to back the loan because property values had fallen so steeply. Transfer Master was forced to get a Small Business Association loan at higher rates.

Goldsmith said he knew things were bad when he went to pray at the synagogue and there were only two people, besides him, who had regular wages.

"Everyone else went seven or eight weeks without paychecks," he said. "How do you address that? You can't give money to everyone."

But people stepped up, Goldsmith said, especially Catholic sisters. Dozens of women religious — without any previous notice or time to prepare — dropped everything and arrived within hours to help deal with the chaos left behind. Four congregations in Dubuque, as well as congregations throughout the Midwest, responded to help those left behind.

'We are on the right side of history'

Goldsmith was among those who were unsure about Friday's gathering. What happened needs to be remembered, he said, but the town also needs to move forward. He liked the idea of the interfaith prayer service, but wasn't sure the planned march toward the plant after the service would have a positive effect.

Postville Mayor Leigh Rekow, who organizers said declined to attend, had similar sentiments in a Jan. 7 guest column in The Gazette of Waterloo, Iowa.

"The plant is under a new owner and management," Rekow wrote. "I don't see a march in its direction as positive, but I do see a celebration of the part St. Bridget's, all our local and surrounding churches and our food bank played in providing for those left behind."

In the end, those fears were put to rest by rain, cold temperatures and heavy mud at the march's destination. Attendees instead rallied inside St. Bridget.

Erik Camayd-Freixas was a translator for the heavily criticized trials held for those arrested, but quit because he could not be part of the injustice he saw happening. Nearly 300 people were convicted of criminal charges and sentenced to prison in just four days, with defendants tried in groups of 10 and sentenced five at a time.

It was later revealed that defense attorneys had been issued scripts by prosecutors, which "included a model of the guilty pleas that prosecutors planned to offer as well as statements to be made by the judges when they accepted the pleas and handed down sentences," The New York Times reported.

Camayd-Freixas has since written a book about Postville and immigration policy, US Immigration Reform and Its Global Impact: Lessons from the Postville Raid.

"We are on the right side of history," Camayd-Freixas told the crowd. "We will win. We will never surrender. We will never stop fighting. And our descendants 100 years from now will be here in St. Bridget's Church, still taking care of their fellow human beings."

The communities of women religious in the region around Postville got plenty of experience helping their fellow human beings in the months following the raid.

Sr. Mary Lee Cox, a Sister of St. Francis of Dubuque, was teaching English as a second language to immigrants in the meatpacking plants of Sioux City, Iowa. She made the five-hour drive across the state as soon as she could, arriving the next morning.

"The women were in terror," Cox said. "They were wearing those ankle monitors — I can never forget that. 'Awful' doesn't describe it. It was dehumanizing. It was little children looking up at their mothers and their mothers weeping."

Cox said that trauma returned when she heard that U.S. Attorney General Jeff Sessions said on May 7 that the government will separate families who cross the border illegally.

"I have seen children taken from fathers," Cox said. "I couldn't believe what had happened to this small, peaceful, loving part of Iowa that I had grown up in."

Related column on Global Sisters Report - From Postville to Pentecost 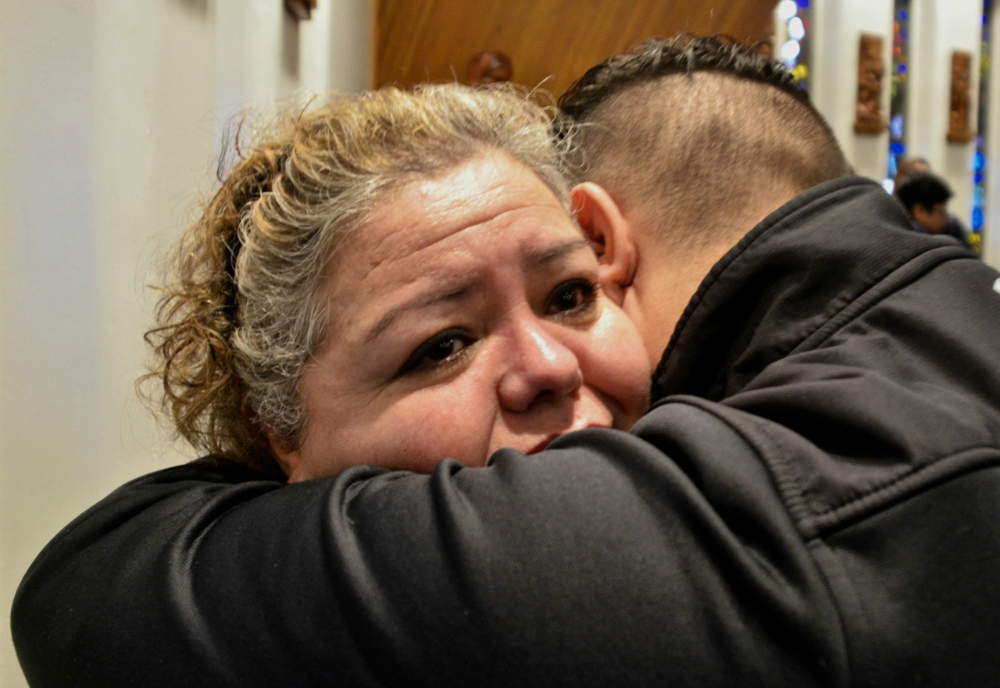 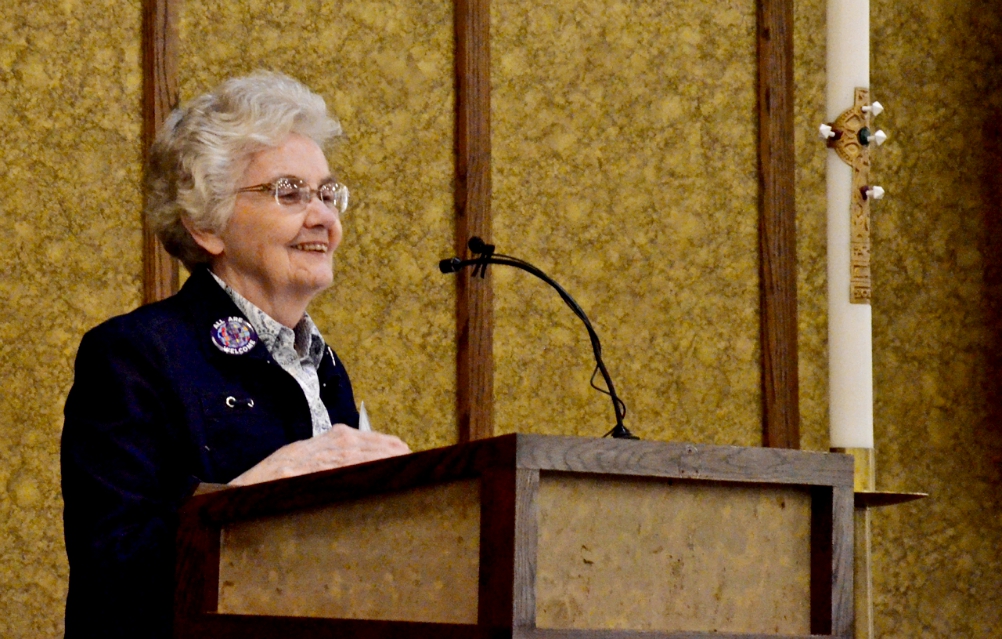 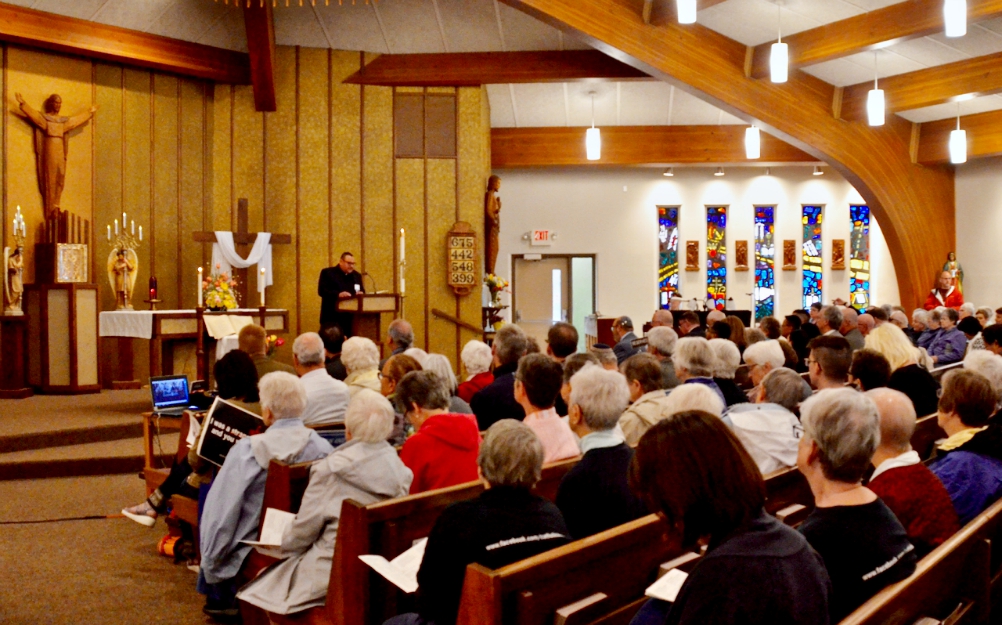 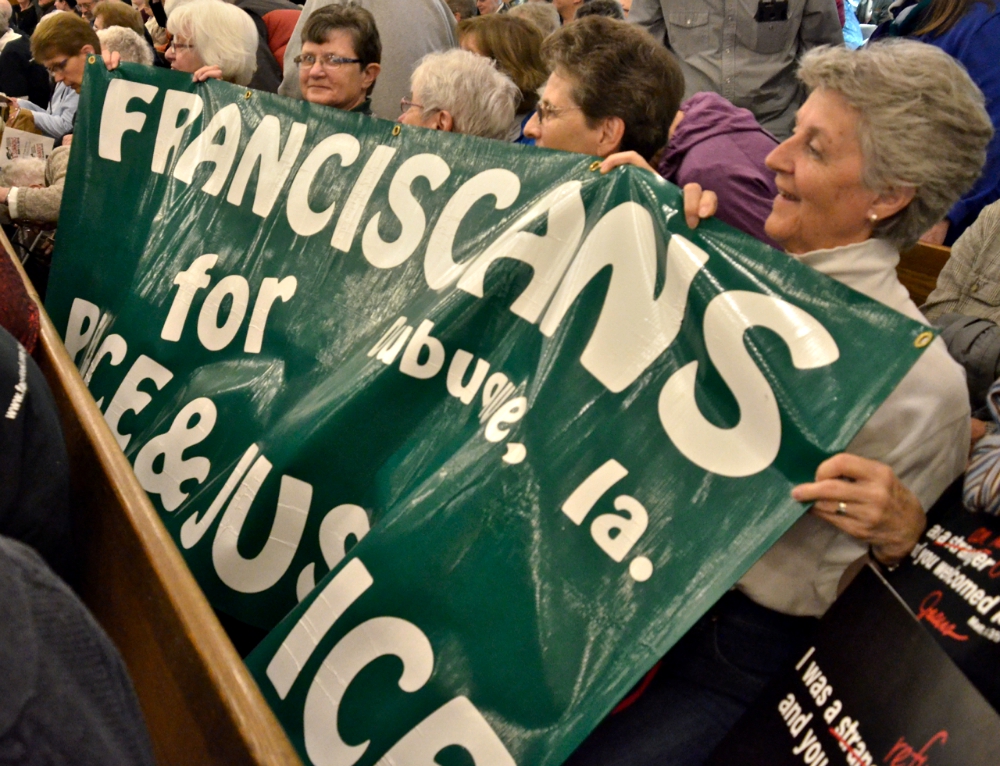