Prayer keeps award-winning nun centered amid all the hoopla 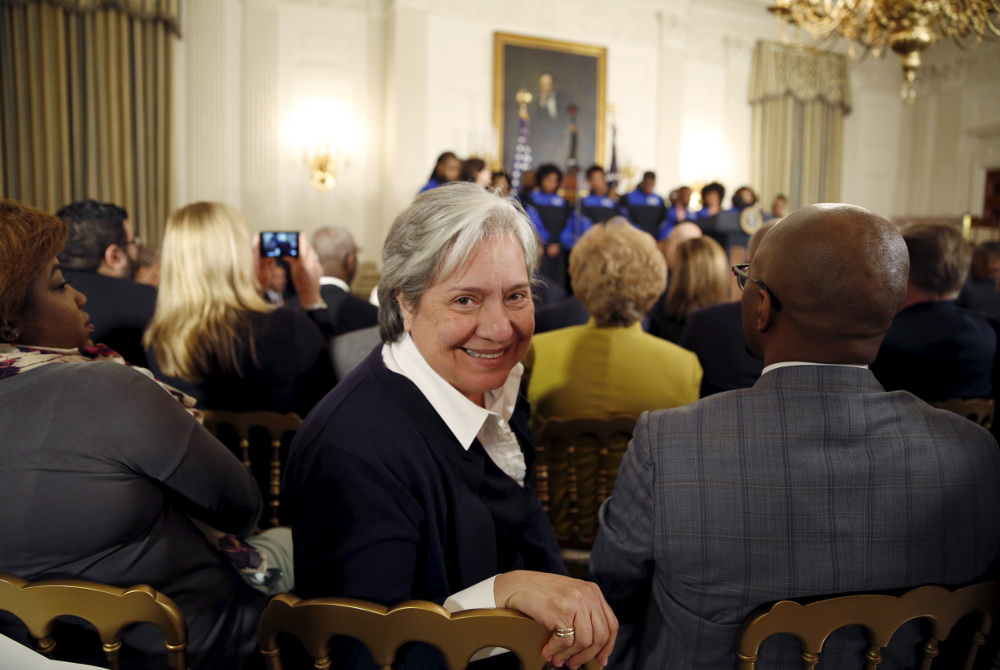 Sr. Norma Pimentel of Brownsville, Texas, a member of the Missionaries of Jesus, attends the Easter Prayer Breakfast at the White House in Washington March 30, 2016. Executive director of Catholic Charities of the Rio Grande Valley, Sister Pimentel has received national honors for her work with immigrants. (CNS/Kevin Lamarque, Reuters)

Washington, D.C. — You might have seen Sr. Norma Pimentel around: hoping to talk with President Donald Trump when he made his Texas-Mexico border visit in January; speaking at the United Nations; testifying before Congress; being part of an international satellite broadcast in 2015 with Pope Francis just before the pope's U.S. visit.

But that's not all. She has won a number of awards, including the University of Notre Dame's prestigious Laetare Medal, Catholic Charities USA's "Keep the Dream Alive" award and the Sister Margaret Cafferty Development of Peoples Award from the Catholic Campaign for Human Development, presented Feb. 2 during the Catholic Social Ministry Gathering in Washington.

How does she do it? In one word, prayer.

"My prayer life, it's key for who I am today and what I do," Pimentel, a member of the Missionaries of Jesus, told Catholic News Service in a Feb. 2 interview following the award ceremony.

"If I didn't make the time to wake up early in the morning to go to Mass and do my prayers and end with my prayers at night, I think I would get lost in all of this. It would be all about me and all the sensational attention that is given to me."

Pointing skyward, she added, "It's always Jesus Christ himself. He is guiding us to care for his people. And so we must continue to ask to pass that message to everyone who needs to hear it. We are defending life."

Pimentel's ministry does not seem all that complicated, until you look at the scale. Since her immigrant ministry began in 2014, she estimates she has met 125,000 immigrants at the bus stop in McAllen, Texas, taken them to a shelter where they can get a shower, toiletries, some food and a respite for a couple of hours — until it's back to the bus station for the next leg of a highly uncertain journey.

"I hired someone to follow up on how they are doing," Pimentel said. "Some have been deported, some do not have that phone number (anymore). Some others are still hoping to have their situation resolved. And some we never hear from."

"For me, when I see people that come from different parts of the United States to volunteer, pretty much to learn and see what's happening and to be part of that response, they're 100 percent self-giving to be there to help the immigrants," Pimentel said, holding out special praise for the many retired religious sisters who come in pairs and stay for two weeks to help.

"You see in their faces, the joy of helping, the joy of being able to care for the families, whether it's cleaning a toilet, washing the towels, making sandwiches. You see in them 'con gusto,' with great ... happiness. They're not getting paid, they're doing it out of their own enthusiasm to do something good. You see it in their faces," she added.

"Their engagement and their involvement becomes so alive and you know that God is present in their life," Pimentel told CNS. "That comes from a sense of awareness of God in them through that expression in them of what they're doing. In Spanish, 'rostro' — you see it in their face. All of that is very evident."

That "rostro" is not always evident in the faces of the immigrants Pimentel and her crew are helping.

"These families are very afraid," Pimentel said, "because they've been taken advantage of, abused in many ways. They don't know if the person approaching them is there to help them or to hurt them."

Despite that, she noted there has never been a violent incident in her ministry.

Because she is so closely identified with her immigrant ministry, one has to remember that at the same time Pimentel is executive director of Catholic Charities of the Rio Grande Valley in the Diocese of Brownsville, Texas. She reviews grant proposals she used to write herself.

But "before and even now, we respond to the needs of our community, attend to those families in some way they need help. I continue to do that as well, even to this day," she said.

And she does it in an area that, by many measures, is itself one of the poorest areas in the United States.

"We have very poor people. Yet within the poverty of the families, they share what little they have with those who have less. One of the things that our people in the Rio Grande Valley is that there are people who are very generous," Pimentel told CNS.

For some assistance from outside the valley, she takes advantage of her celebrity to ask for fresh supplies of dwindling items on Facebook.

"We run out of — for example, 'Sister, we are out of deodorants and combs.' We have so many followers on Facebook. I have to put it (to Facebook), because if somebody else does it, they don't get as many (responses)," Pimentel said.

After she posts what it is needed on Facebook, then her followers "share it" and the needed items just pour in, she said.

"Sometimes," she added, "I have said I have to tell them to stop sending it. We needed baby bottles. Now we have a whole room of baby bottles. It amazing, the generosity that exists in the United States."

Migration | Prayer keeps award-winning nun centered amid all the hoopla

Our common home in Honduras

Detaining immigrants has a more profound effect than many realize